Lake Nakuru and a million flamingos

Lake Nakuru is the jewel of the national park of the same name in Kenya. Both the lake and the reserve surrounding it are a unique natural ecosystem that includes hundreds of animal and plant species as well as hundreds of thousands or even millions of graceful flamingos.

In addition to the diversity of fauna and flora, and the amazing beauty of this beautiful place, the incredible bird world of Lake Nakuru is worth special attention.

Nakuru National Park is located in western Kenya in the East African Rift Valley, better known as the Great Rift Valley. The park lies almost on the very equator. To the north of the park is the city of Nakuru.

The capital of Kenya, Nairobi, is 150 kilometers southeast.

The park covers an area of 188 km2 . It was created in 1961 around Lake Nakuru, south of the town of the same name. It is known primarily for the thousands and thousands of flamingos that nest along its shores. Often the lakeshore is literally hidden by a huge mass of birds. But more about them later.

Nakuru Reserve is the habitat of giraffes, black and white rhinos. There are now more than 25 eastern black rhinos and about 70 southern white rhinos.

There are also warthogs and baboons. Predators include East African lions, cheetahs and leopards. The park also has large-sized pythons that live in dense forests.

In addition to flamingos, there are many other bird species found in and around the lake, such as the screech-eagle, goliath heron, hammerhead, kingfisher, and Verro’s eagle. In all, there are about 450 species of birds here.

And yet a special place in the park is occupied by a surprisingly feathered lake. 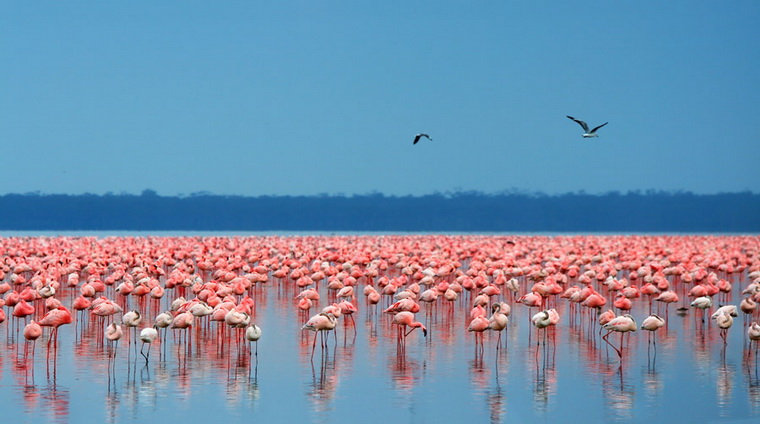 Lake Nakuru lies at an altitude of 1754 meters above sea level and is a drainless lake. The water level directly depends on the rainfall in the rainy season, so the area of the reservoir can vary from 5 km2 to 45 km2. As you understand, the area is smallest during the dry season and largest during the rainy season. The level of the lake dropped sharply in the early 1990s, but has since recovered.

The average depth of the reservoir is about 30 cm and the maximum depth reaches 1.8 meters.

Lake Nakuru is protected under the Ramsar Convention on Wetlands.

The abundance of algae attracts a huge number of flamingos and other birds. And this is the most important attraction of Lake Nakuru. It has even been described by ornithologists as the greatest bird marketplace in the world. 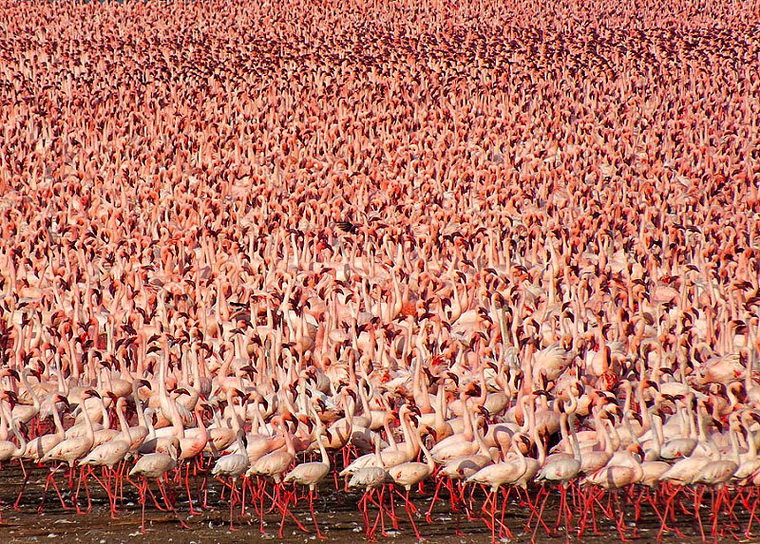 The surface of the lake is often hidden by a gigantic number of birds. Scientists can’t even count their approximate numbers, but we’re talking about one million individuals (other reports put them at around two million).

There are two main flamingo species nesting in Lake Nakuru – large and small.

The lesser flamingo can be distinguished by its deep red carmine and pink plumage. The large flamingo has a less expressive color and a beak with a small black tip. Lesser flamingos are the most numerous in the surrounding area. Flamingos feed on algae, but the algae itself grows thanks to bird droppings. Amazing natural symbiosis.

According to scientists, the birds consume about 250 tons (.) of algae from each hectare of surface area annually. The number of flamingos depends on water levels and food conditions, and the best spot to see them is Baboon Cliff View Point at the west end of the lake.

Be sure to check out Laguna Colorado and Laguna Verde. Both are located in Bolivia and are also attractive to flamingos as well as tourists.

Flamingo numbers have declined recently, perhaps because of too much tourism and pollution caused by a number of industrial plants that dump trash in the water or simply because of changes in water quality.

Pollution and drought are destroying the flamingos’ food (cyanobacteria or blue-green algae) and causing them to migrate to nearby lakes, such as Lake Elementita. But for now, huge aggregations of these graceful birds can still be seen on the shores of Lake Nakuru. 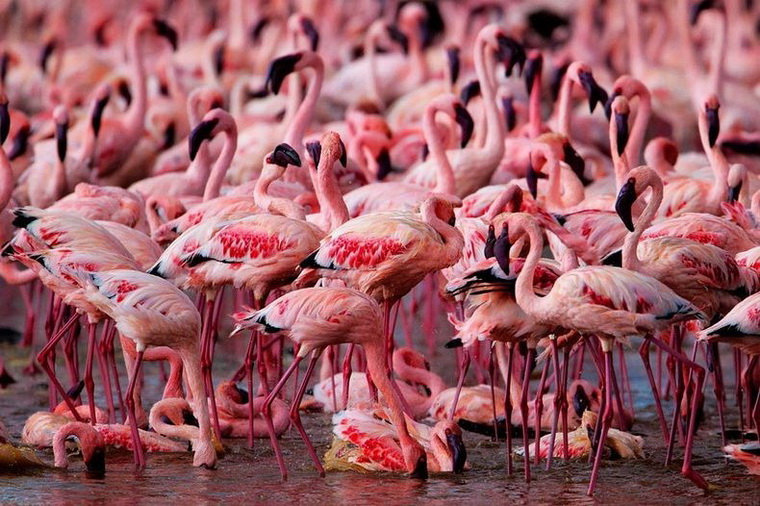 The Lesser Flamingo of Lake Nakuru

The park is connected by a paved road to Nairobi. This is the A104 highway. The most common route to the park is through the main gate 4 km from Nakuru town center. You can also access the park from Nairobi Nakuru’s main road at Lanet Gate. There is also the Nderit entrance, but it is little used by people.

Five kilometers south of the lake there is a small airstrip for light aircraft. There are good roads through the park.

Access to the park is paid. Foreigners have to pay $35 for a child and $60 for an adult. For locals, the amount is much lower, 215 Kenya shillings (about $2) for a child and 860 Kenya shillings ($8.5) for an adult. It is recommended that you bring drinking water, picnic items, and camping equipment if you intend to stay overnight. Also, don’t forget binoculars, camera, hat, sunscreen, sunglasses and guidebooks.

Lake Nakuru is one of the most interesting attractions in Kenya. Flamingos live here in large numbers and there are rhinos and other animals. This national park is small but very popular with tourists.

Lake Nakuru is one of the most interesting sights in Kenya, included along with Amboseli in the Premium Parks of this country. Due to its natural riches, the area around the lake became a nature reserve back in 1960. Though Lake Nakuru National Park is small compared to other protected areas in Kenya (188 sq. km) it is very interesting with its fauna and especially with the flamingos. 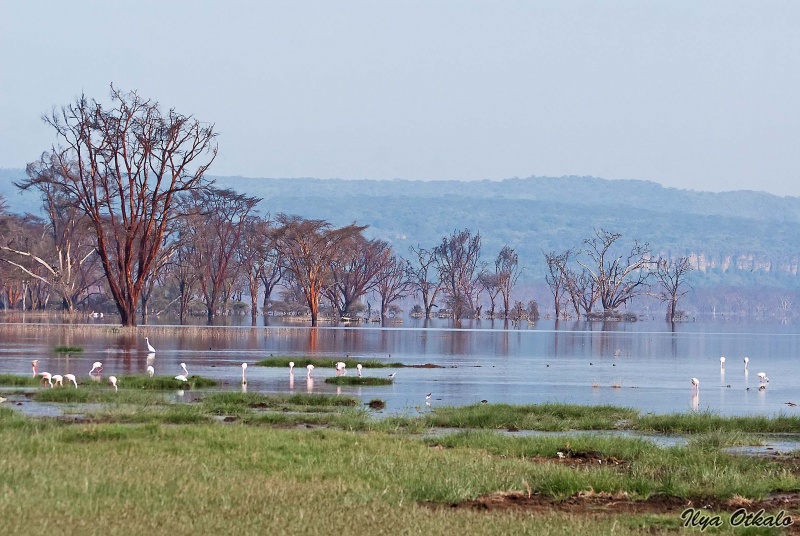 The nature of Lake Nakuru

Nakuru (Swahili for “dusty place”) is not one but several lakes combined into a system. In total they occupy about 40 km². They are located in the East African Rift Valley, the largest rift in East Africa. 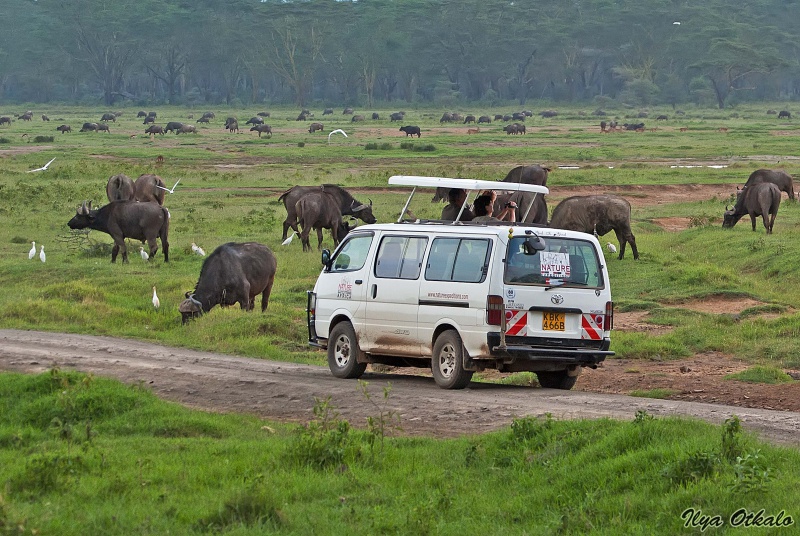 It is believed that Nakuru is a salty lake, but in fact the salinity of the waters in different parts of this system is different (in the 1990s the salinity of Nakuru has fallen dramatically, but by now it has recovered). Moreover, although it is said that Lake Nakuru is located at 1,759 meters above sea level, in reality parts of Lake Nakuru Park, representing different lakes, occupy different altitudes, creating a special landscape.

Lake Nakuru is located in the center of Kenya.

Geographic attractions of the park

In addition to observing the birds and animals in Lake Nakuru National Park it is worth climbing Menengai, a dormant volcano 2.3 kilometers above sea level. The views from here are unbelievably beautiful. 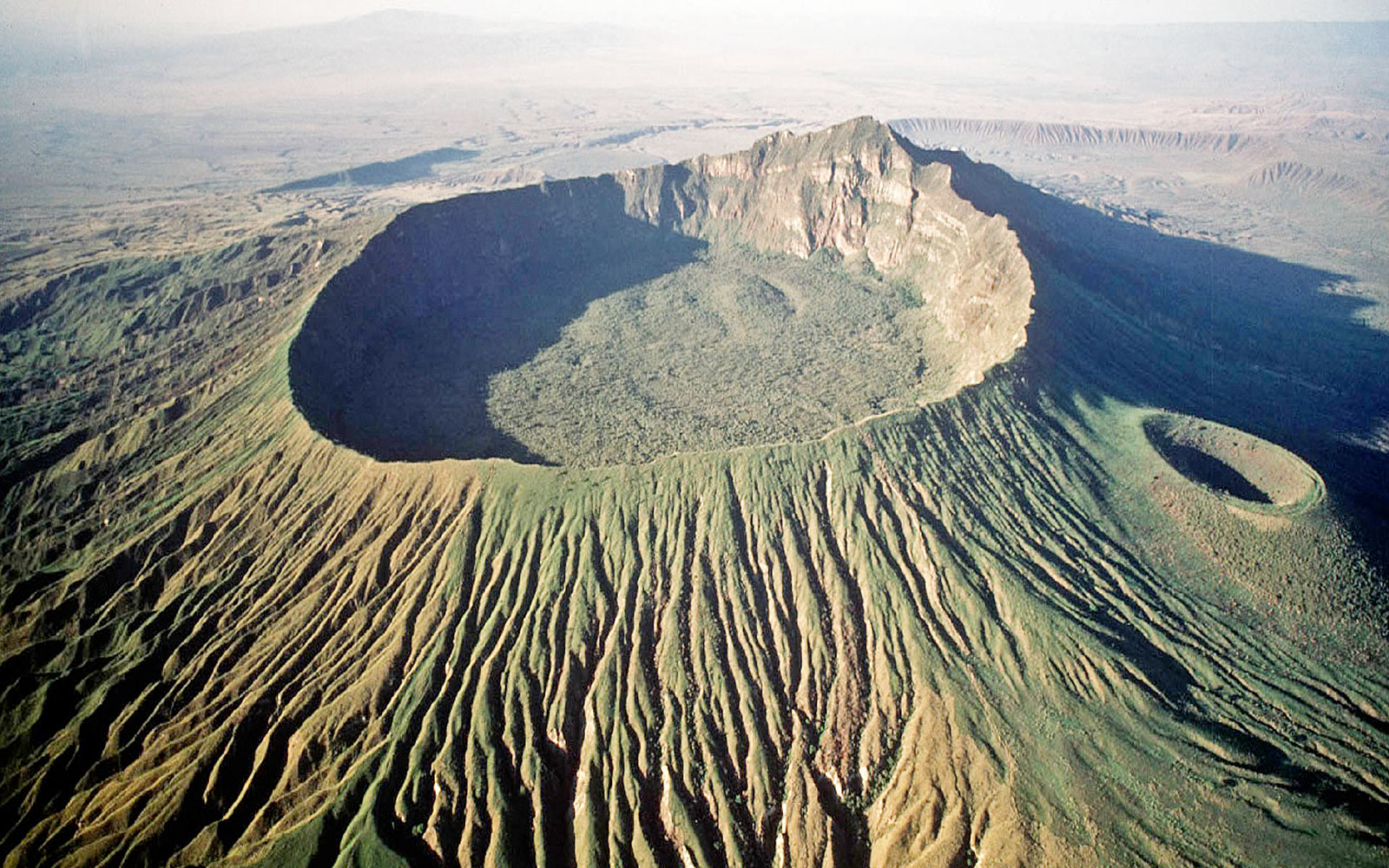 Another interesting non-fauna attraction of this place is Thomson Falls. It is quite a dangerous path up an almost steep path. But it’s possible to get there if you choose to stay at Thomson Falls Lodge. 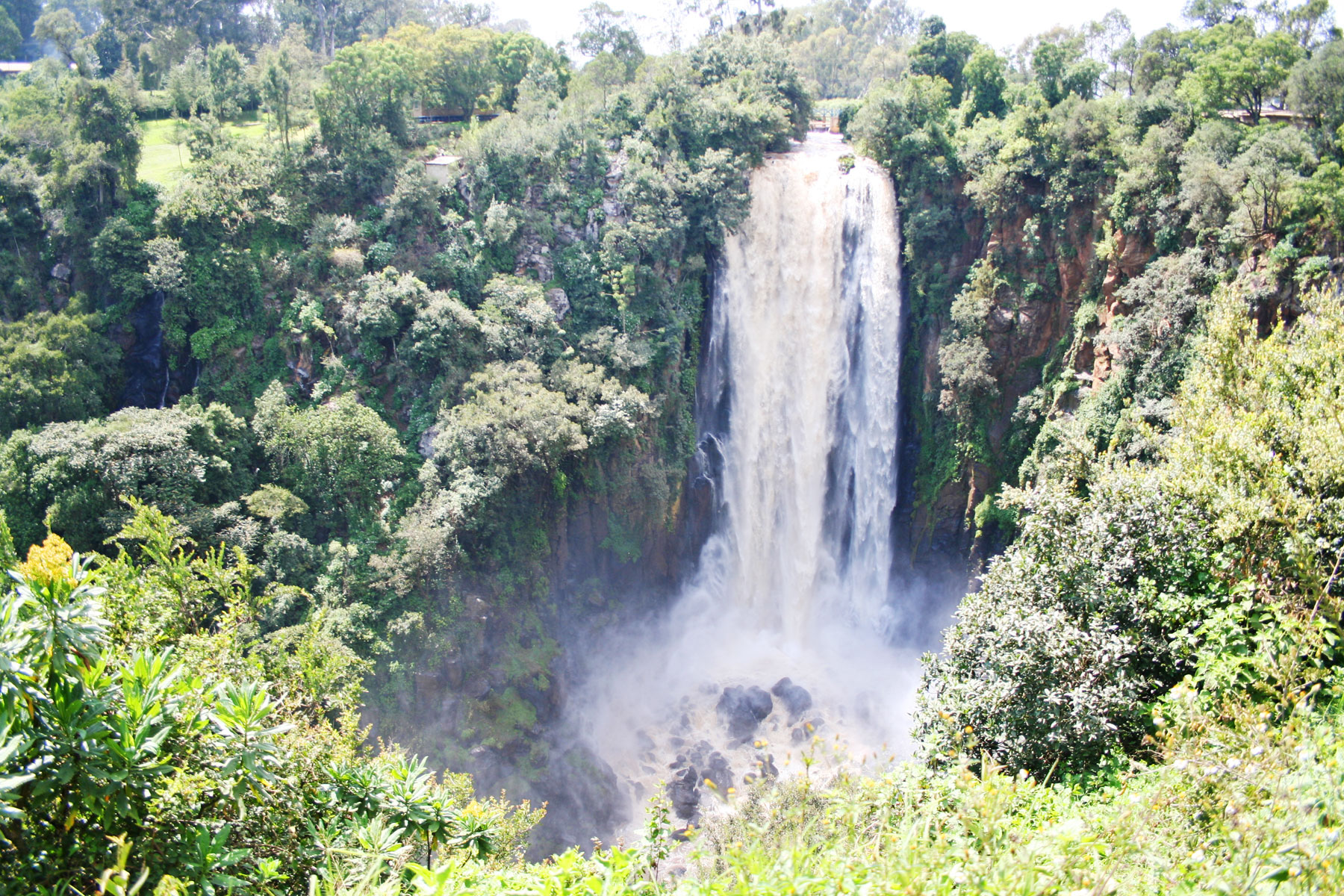 The wildlife of Lake Nakuru

Though Lake Nakuru National Park is not as big as for example Tsavo or even Masai Mara, the fauna here is very rich and diverse and has its own features. The number 1 attraction of the park is the flamingo.

Lake Nakuru – home to flamingos . The matter is that here there are several special algae, mostly blue-green algae Cyanophyte Spirulina platensis. Flamingos feed on them and are therefore very fond of Nakuru. Depending on the season, the concentration of birds here is different, but at its peak can be a million and a half to two million flamingos and half a million pelicans! Tours to Kenya are an opportunity, among other things, to see the surface of the lake completely hidden by the pink birds.

READ
Tugela Falls - breathing down the neck of the legendary Angel. SOUTH AFRICA 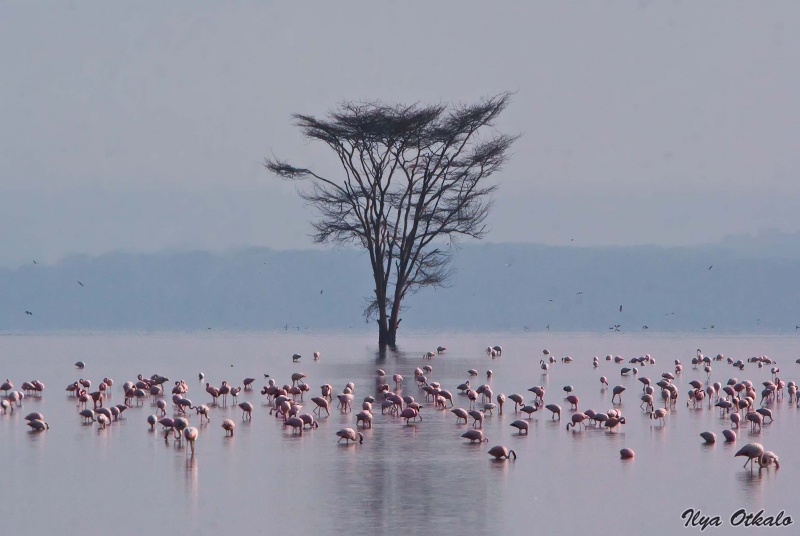 Rhinos are the second “living jewel” of Nakuru after the flamingos. For their sake the protected area of the national park was enlarged some time ago. It is home to one of Kenya’s largest populations of black rhino and an impressive number of white rhinos. 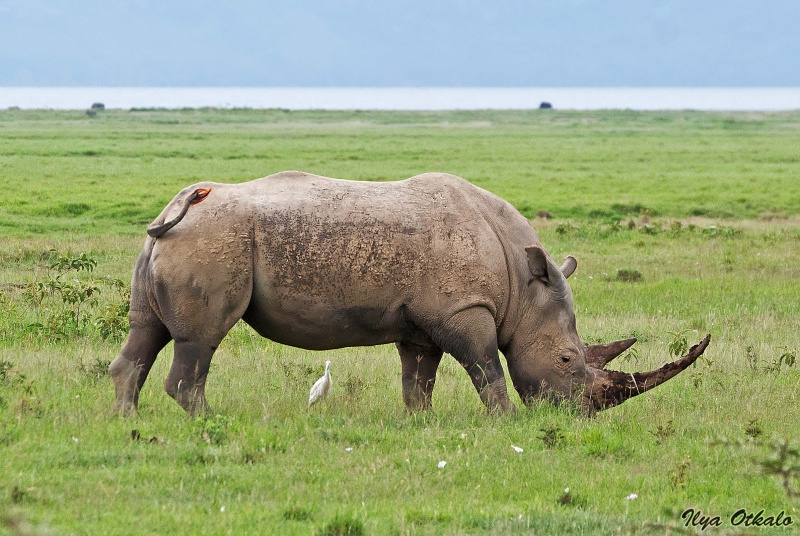 Other fauna of the lake 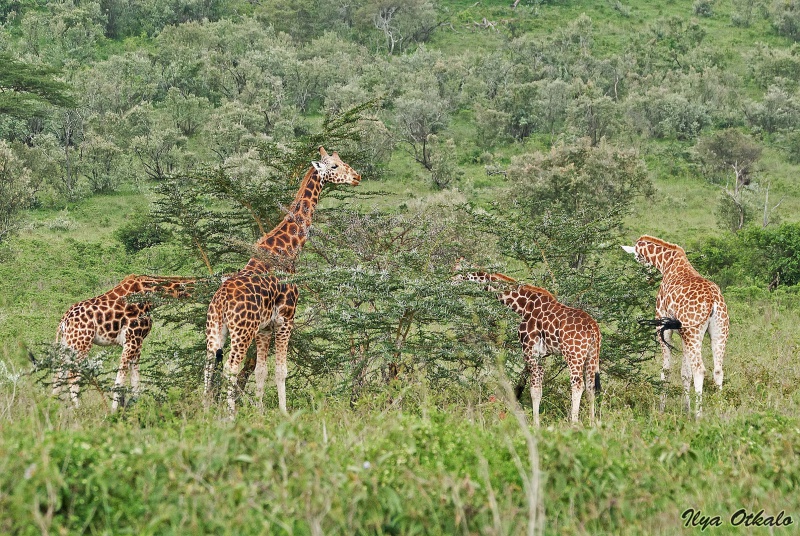 In the wooded part, away from the shores of the lake itself, live pythons – travelers traveling to Kenya can see them here in the trees or crawling across the trail. A lot in the reserve and water goats – their fat is poisonous and they are not afraid of predators, which also inhabit here (these are lions and leopards, leopards in recent years is becoming more and more). 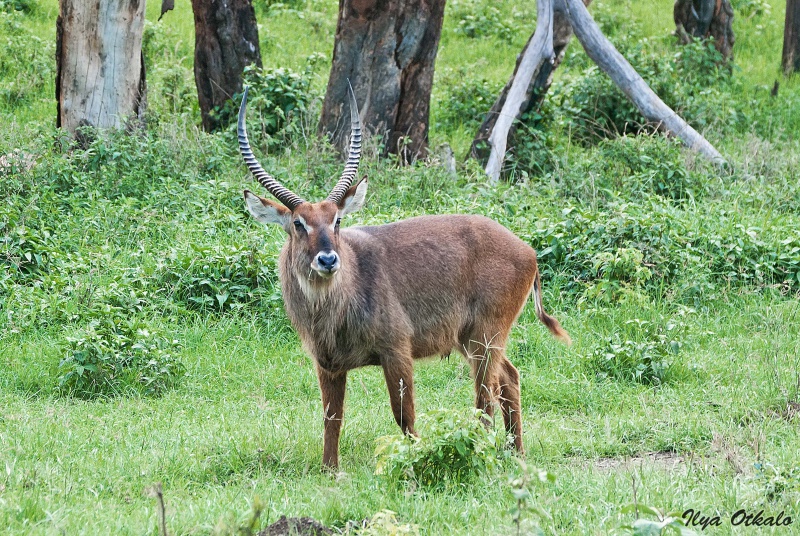 In the vicinity of Lake Nakuru you can meet the warthog – remember Pumba from The Lion King? The baboons also live here. On the shores of Lake Nakuru can be found quite a large number of buffalo . 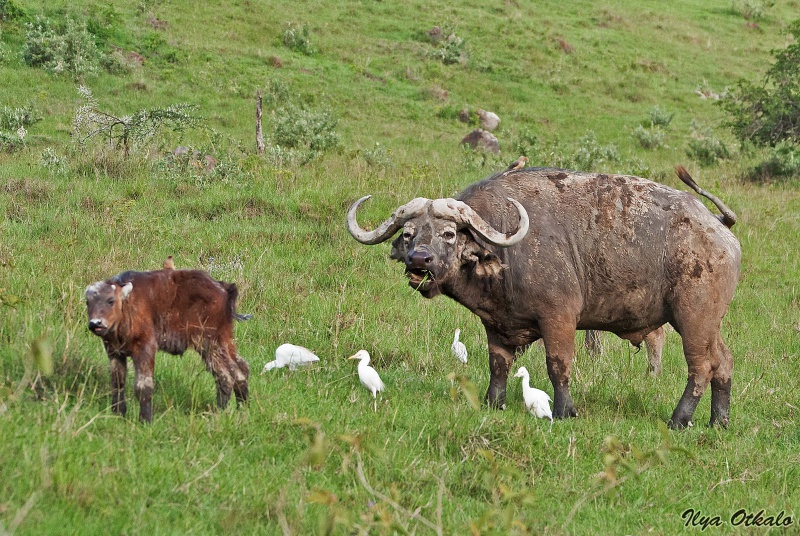 As for birds, in addition to flamingos, it is worth to note quite rare bird-secretary, which took a fancy to these places, and also a great egret, yellow-billed stork, Kaffir eagle, sea eagle, African fish eagle. In general, both on the shores and away from them in the territory of the reserve are a lot of birds and originally “Lake Nakuru” was exactly the ornithological park. Look how beautiful the crowned crane is . 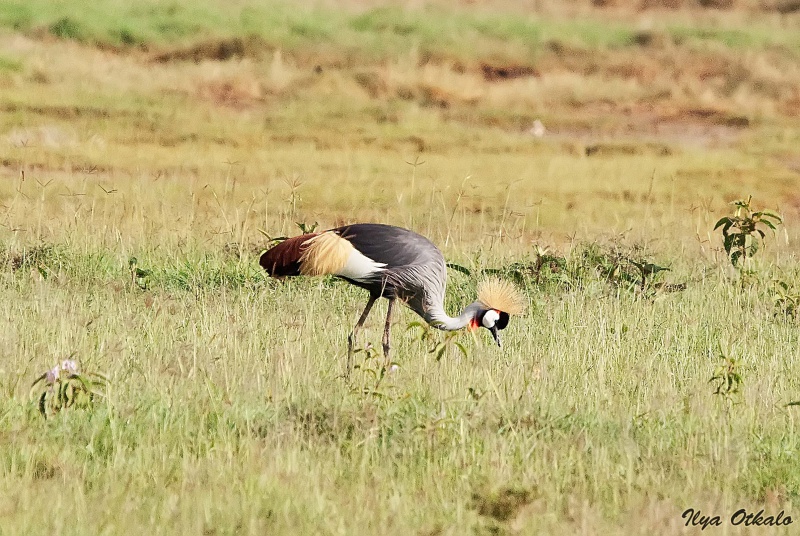 There are good lodges and campsites near the park. These are, for example:

Among the lodges near the lake is the comfortable Lake Nakuru Lodge. From here you can observe the fauna of the reserve from a pool or a lounge chair. 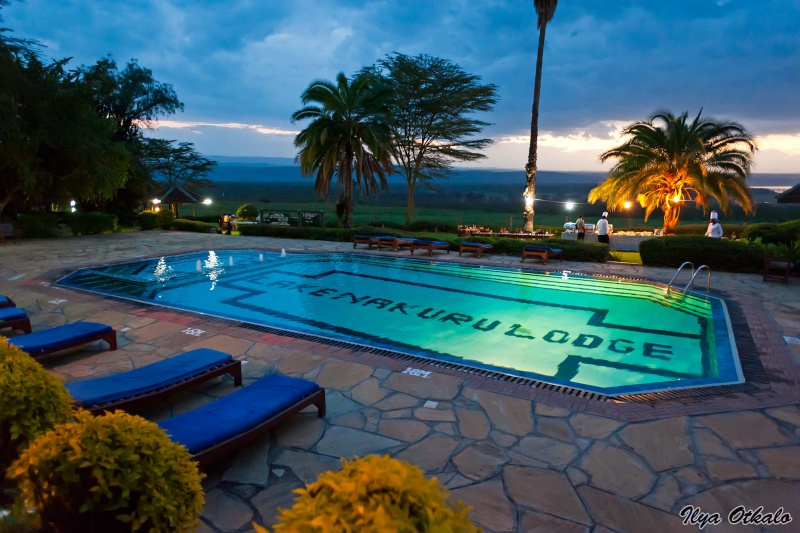 There are good camps in the park itself, budget and more expensive, where tourists will be provided with quality food, comfortable beds, electricity, water and Internet.

Under no circumstances should not go beyond the fenced area without trained escorts. There is a real wilderness around! 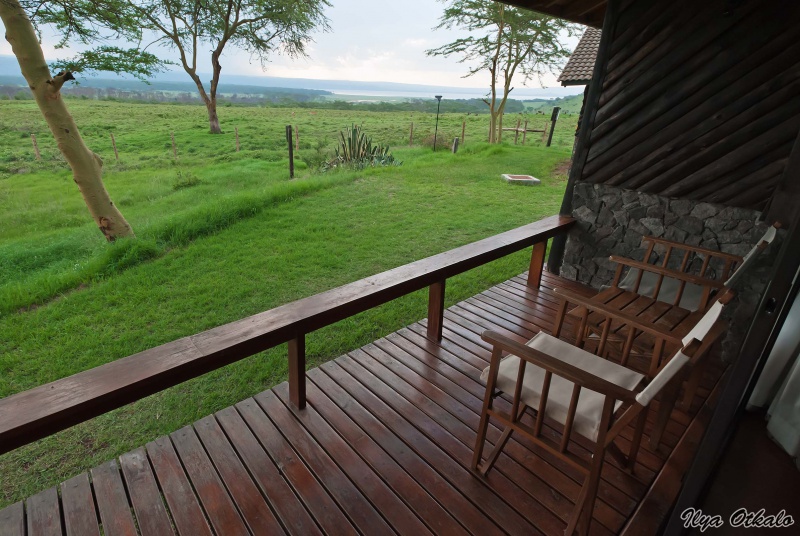 How to get to the lake?

The Kenyan capital of Nairobi is 156 km away on the A104 from Nakuru, the starting point for your trek through the national park. From the city to the entrance of the reserve is 4 km on the Flamingo road.

The best way to get there is by car. But if you want to travel to Kenya at your own risk and have a limited budget you can take a bus (they are called here “matatu”) from Nairobi to Nakuru.

Another option is by plane. The park has a landing strip “Naishi”, which is designed for tourist planes.