In the 18th century in India, on a cliff on Niwas Island in the city of Udaipur, almost in the middle of Lake Picola, was a summer royal residence. Today, thanks to the restoration work and original design solutions, the residence of the Maharajah “was transformed” into a beautiful hotel, rightfully deserving five-star rating. We are talking about a luxurious palace on the Picola Lake, better known as Jag Niwas, located in the Indian state of Rajasthan.

The palace of Lake Picola is built of precious and rare white marble, a deposit of which was found in the mountains of Udaipur. This is the most beautiful building material which can change its color depending on the time of the day. The total area of the palace is almost 16 000 square meters. A feature of the rooms on the second floor is their perfectly round shape, with a diameter of 6.4 meters. But this is not the only thing that can literally put everyone who crosses the threshold of the palace into mute shock. In a long list of attractions of the Indian residence: the throne of Shah Jahan, created from monolithic stone, masterpieces of art, unique works of painted glass, a mosque dedicated to the Muslim saint Kapoor Baba, unique fountains and ponds.

Almost all windows of the modern hotel offer its guests a beautiful view of the immaculate smooth surface of Lake Picola. In the evening hours, when the rays of the sun are about to disappear, the palace staff, many of whom, by the way, are descendants of royal servants, offer everyone to enjoy a wonderful dinner at the restaurant on a small island surrounded by blooming lilies. It is impossible not to mention another fact, the popularity and fame of this Indian landmark in some way to owe directors, who conducted here in 1983, shooting the film about James Bond.

History of the construction of the Pichola Lake Palace

The construction of the Picola Lake Palace was carried out from 1743 to 1746 under the direction of the Maharana of Udaipur. The mastermind and the founder of the Palace was Jag-Nivas (Jan-Nivas); actually that is why the new building was named after him. The main facade of the palace faces east, and it is no coincidence because many people in this country dedicate themselves to praying to the Sun God in the morning hours. The Picola Lake Palace, enclosed by majestic colonnades, amazing fountains and magnificent gardens, was the summer residence of many rulers of Udaipur. Here they found not only solitude, but also held so-called durbars or secular balls and councils.

In some historical documents there is a mention of the Lake Palace as a place where the famous Europeans persecuted by the enemies could find refuge. About 100 years after the erection of the Palace, in 1857, there was a Sipai uprising in the country and some families of Europeans were able to flee and hide behind the walls of the Lake Picola Palace. Maharan Swarup Singh, then ruler, decided to help the fugitives and ordered the destruction of all the available boats in the city, thus preventing the rebels from reaching the island.

Time slowly passed its course, the Palace on the Picola Lake gradually began to lose its former grandeur, and there was no talk of carrying out at least some restoration work. Many writers have referred to this masterpiece as “the unique water palace of Udaipur, crumbling under the influence of time and moisture”. Lake Picola Palace in IndiaMaharan Bhopal Singh, who ruled from 1930 to 1955, added a pavilion to the Palace, later called Chandra Prakash. A little later, Jag Niwas Palace was transformed into Udaipur’s first luxury hotel. The most famous American artist of that time, Deed Contractor, worked on the project. In 1971 the company “Taj Hotel Resorts and Palaces” became the owner of the hotel. Having decided to do their bit in the restoration of the historical and architectural monument, the new owners under the guidance of Jamshid D.F. built 75 more rooms to the main building. The subsequent global restoration, which touched the Palace of Lake Picola, was carried out very recently, only in 2000. Today it is in excellent condition and is listed by many tourist companies as one of the most important tourist attractions in the East.

The Palace of Lake Picola, for its location, and it is on the shores of three lakes at once, has another name – “Versailles”. Its marble walls are immersed directly in the water surface of the lakes. Behind them are several courtyards, magnificent fountains and even small lakes with artificial islands. This is one of the most memorable and recognizable Palaces of Rajasthan. Many famous people have been here, including Queen Elizabeth II, Lord Curzon (Viceroy of India), Vivien Leigh (Indian-born actress, famous for her role as Scarlett O’Hara in Gone with the Wind), Jacqueline Kennedy (U.S. First Lady 1961-63). Lake Picola Palace in IndiaAs mentioned above, in 1983 the palace was the site of a James Bond movie. A year later the British television series “Pearls of the Crown” was filmed here.

In addition, the Palace is now recognized as not only the most expensive hotel complex, but also the most beautiful hotel in India. Travelers who have been led to India will be interested to know that the Lake Palace is among the top ten best hotels in the country. Currently, the city authorities are doing their best to ensure that this monument of history and architecture also gets another title – the main tourist center of West India.

How to get to the Picola Lake Palace

There are different ways to reach the city of Udaipur. It is 42 kilometers away from the airport Dabok, which receives planes from cities: Goa, Delhi, Jaipur, and Mubai. In addition, for those who prefer the train to the plane, you can use the services of the railroad, though it will need to spend quite a lot of time. Travellers, as another option, offer to turn to the car carriers: bus routes to the Palace are laid from many Indian cities. At the end of the material I would like to add that, as many years ago, you can get directly to the Palace on Lake Picola only by boat, which even today transport travelers from the pier to the beautiful island.

The city of Udaipur, where the palace is located, has long been famous for its palaces of incredible beauty and unique style. Some of the most famous palaces can be found here. These include the City Palace, the Jagmandir Palace, the Picola Lake Palace, and the Monsoon Palace or Rain Palace. Also here you can see a collection of cars Maharaja, Vaishnava temple Jagdish Mandir, the residence of former Prime Minister Bagore ki Haveli, pink ornamental garden of XVIII century Saheliyon ki Bari, ethnographic museum and tourist village Shilpgram, Agar, a beautiful picturesque artificial mountain lake Badi ka Talab. There are many tourist routes passing through Udaipur, but nevertheless, it does not lose its special flavor. 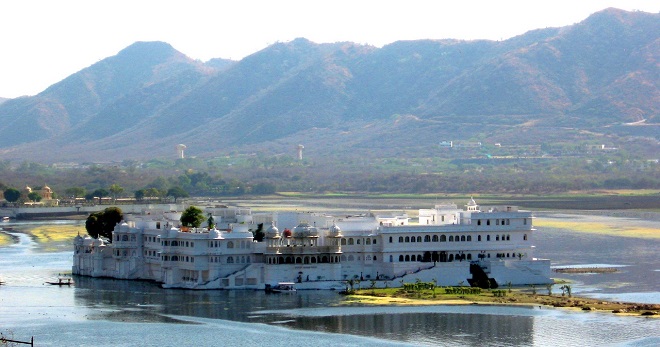 The stunning Taj Lake Palace Hotel, better known as the Lake Palace, is located in Udaipur, in the heart of Lake Pichola. It is a former royal residence of the 18th century and now a luxurious establishment resembling a precious lotus flower blooming out of a murky pond. Tourists admire it from the waterfront in Udaipur, and only the fortunate can treat themselves at night in a luxurious apartment.

In the mid-18th century. tiny rocky island called Jag Niwas in Udaipur attracted the Maharajah of Rajasthan Jagat Singh II. Without procrastination he commanded to build his summer residence on it. So in 1746 the chic Lake Palace appeared on the island. For a long time the maharajdi family spent their summer days here, but over time they lost both power and money; there was a catastrophic shortage of money to maintain the house. By the second half of the 19th century it was in a deplorable condition – the water surroundings and harsh weather conditions had done their work. The palace was decaying and falling apart, the snow-white marble was darkening, the once luxurious garden was falling into disrepair. 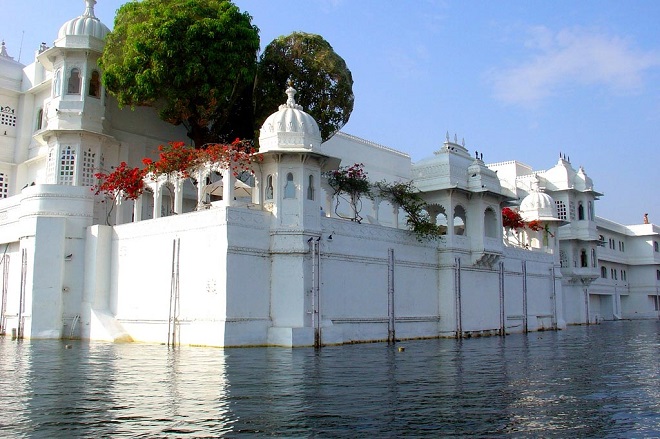 From palace to hotel

In the 1960s a descendant of Maharaj Bhagwat Singh decided to turn the dying castle into a hotel. He hired the best designers and builders, and by 1969 the hotel was ready. It is noteworthy that the palace almost completely preserved its original appearance, with the exception of small additions. A year later the hotel received the status of a five-star hotel, and a year later the Taj Company – India’s leading hotelier – took over the management of the hotel. Among the celebrity guests were Lord Curzon, Vivien Leigh, Queen Elizabeth, the Shah of Iran, the King of Nepal and Jacqueline Kennedy. 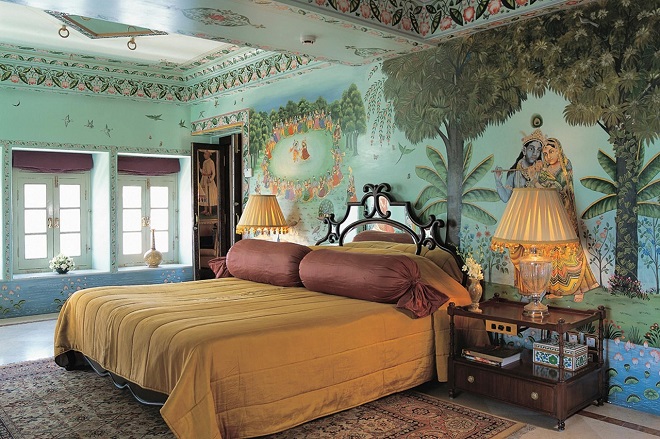 The luxurious residence overlooks the east: it was designed so that the residents could pray to Surya in the morning. Current guests at the Taj Lake Palace tend to wake up early to watch the spectacular sunrise as it rises from behind the city and casts a magical glow over the palace and lake. The interiors recall the dazzling chic of earlier times with their columns, terraces, and exquisite staircases. The upper floor is a perfect circle under the dome and has a black and white marble floor and colorful mosaic walls. 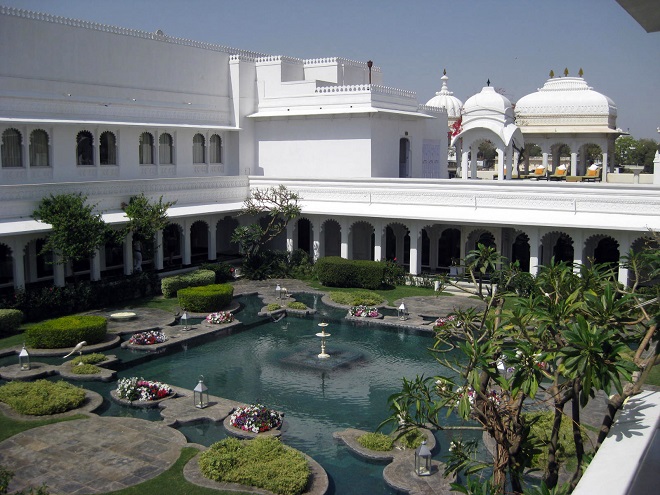 “The Lake Palace is one of India’s finest hotels, despite its modest capacity of only 80 rooms. Each has a luxurious interior in either Maharaja or modern style. Most rooms have breathtaking views of the City Palace, Aravalli and Mahla Magra hills, and Jag Mandir. In addition to accommodations, the hotel offers the following:

The easiest way to get to Udaipur is by plane, the nearest domestic airport Dabok is 40 km from the city. The Lake Palace can only be reached by boat from the pier on City Palace Road.