Mystery of a unique lake Shaitan

Lake Shaitan – is in the south of the Kirov region 39 km from the town of Urzhum, a geological nature monument.

Lake Shaitan is located in the Kirov region of the Russian Federation, near the town of Urzhum. The water body has the shape of a regular oval and covers an area of about two hectares, and its depth, on average, is 12 meters. The lake is located in a swampy area, surrounded by woods on three sides, and the passage to it is accessible only in dry weather.

Residents of the neighborhood, at all times shunned it, did not use the water, do not fish, do not swim in the summer and preferred not to go near it. Such a wary attitude was due to the intimidating name, since Shaitan was an evil spirit, the Devil, and a demon, and such names were not given without a good reason. Also frightening was the incomprehensible devilry going on in the waters of the body of water itself.

From time to time the water in Lake Shaitan gurgled and sometimes even fountained, and the residents of the neighboring village observed water columns up to four meters high and brief ten-meter fountains.

Another unique feature of the reservoir, are small islands floating on the surface. The drifting islets are covered with rather dense grass vegetation, and on the largest of them, except for the lush grass, you can see bushes and even small trees.

Lake Shaitan is located in Urzhumsky district of Kirov region, 39 km from Urzhum. The lake is a geological natural monument. A unique phenomenon of the lake – drifting islands on which grow bushes and small trees.

At the moment, what is happening in the waters of the lake is explained by science, but a century ago, it was nothing but “the devil’s tricks”. The locals believed that an evil spirit lived in the reservoir and that when it became angry, the water in it began to bubble, and water fountains spoke of the demon’s rage.

There is a legend that explains the origin of such an unusual body of water. Long ago, the territory where Lake Shaitan now stands was inhabited by two tribes. The tribes were at enmity with each other because they were divided by faith and worshipped different gods. One of the tribes worshipped the good creator-god, and the other tribe, the destroyer-shaitan.

In time, a petty feud developed into a more decisive action and culminated in a decisive battle between the tribes. The battle lasted all day and the coming of night did not stop it, but when morning came and dawned, the people of the Creator-god saw that on the battlefield there was not a single defeated enemy body, and the killed were fellow tribesmen. How such a thing could have happened, no one understood. How could members of the same tribe fight each other and not notice it? There was no way this could have happened without the intervention of Shaitan.

The lake is of karstic origin, up to 25 meters deep.

The next day after the battle, was full of grief and weeping, and women’s tears, mingled on the battlefield, with the blood of dead people and filled the low-lying field of battle. There was so much blood and tears that the ground could not bear the weight and fell.

In that place, a lake of Shaitan was formed, the waters of which seem to be dark as darkened blood. Since then, there has been a belief that the evil spirit Shaitan settled in the lake immediately after its formation, and the unusual features of the body of water only strengthened this assumption.

According to historical facts, more than a century ago, the land along with Lake Shaitan belonged to a large landowner Mosolov, and on the shore of the reservoir stood a large beautiful tower, which belonged to him.

Mosolov was a great industrialist, a very enterprising and practical man. He invented an amazing way to root out among the peasants the theft of wood on the territory of his possessions. Mosolov successfully took advantage of the peasants’ superstitious fears concerning the devil’s lake. For unauthorized felling, the guilty were taken to the middle of Shaitan Lake and let to swim to the shore to teach a lesson.

People were so much afraid of the lake that such an original method allowed to liquidate entirely unauthorized felling in the landowner’s possessions, though other methods did not give such a phenomenal result.

Shaitan Lake, its wandering islands and fountains: why are they feared by locals and tourists 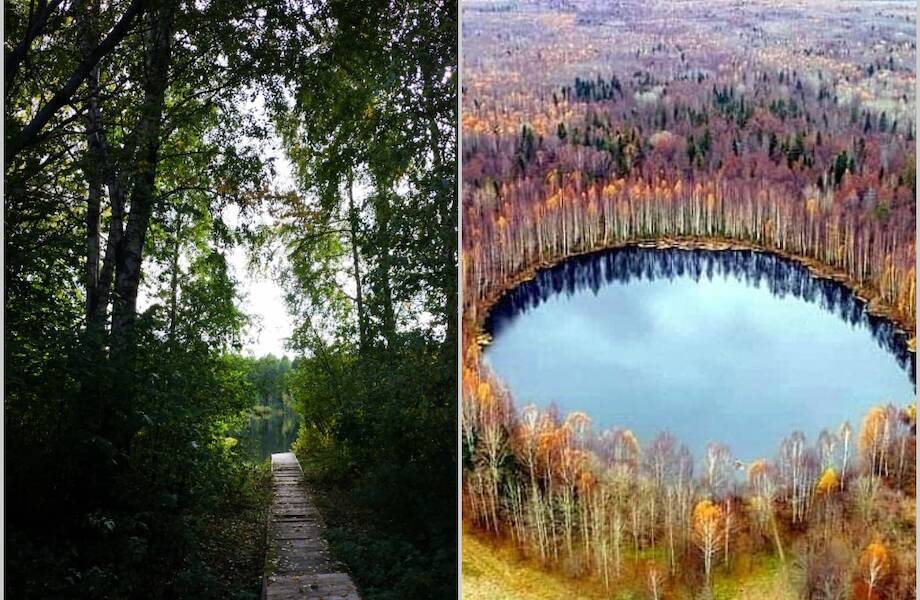 This body of water has been bypassed by locals since ancient times: islands appeared here from nowhere, periodically it seemed to boil, or fountains gushed from the water. So what is the mystery of Devil’s Lake?

A haven of evil spirits

People have always tried to explain what they don’t understand. For example, we told you about the most dangerous lake on the planet, which kills all life around it. It is located in African Cameroon, and the locals have always believed that an evil spirit lives here, but of course modern scientists have proven that this is not true. The lake Shaitan in Kirov region has no bloody history in the past, except the legends, but the horror it has always caused to the locals. It’s all about its peculiarities: islands constantly appear on the lake and then disappear. 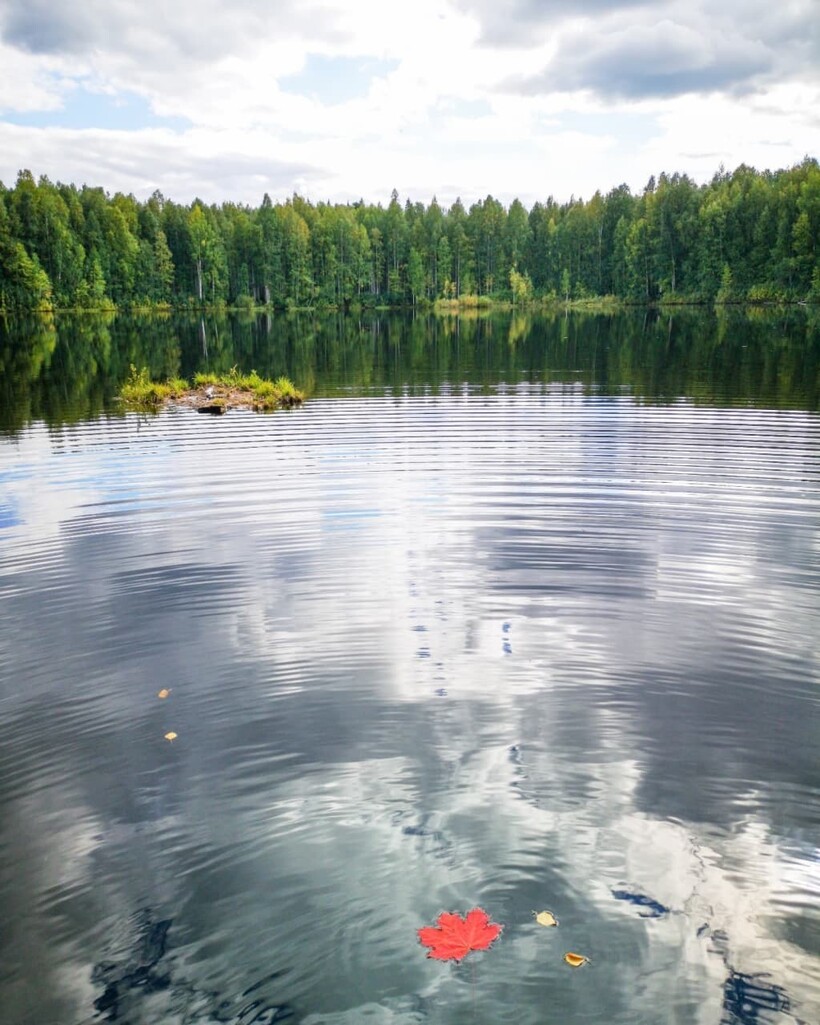 There are usually about twenty islands on the water’s surface, and these patches of land grow grass, trees, and sometimes they’re so big they can support several people. But the islands are not the greatest oddity of Shaitan: periodically in some places the water seems to boil, and sometimes fountains erupt from the bottom. And how not to believe that at the bottom of the lake someone lives, and certainly not good? 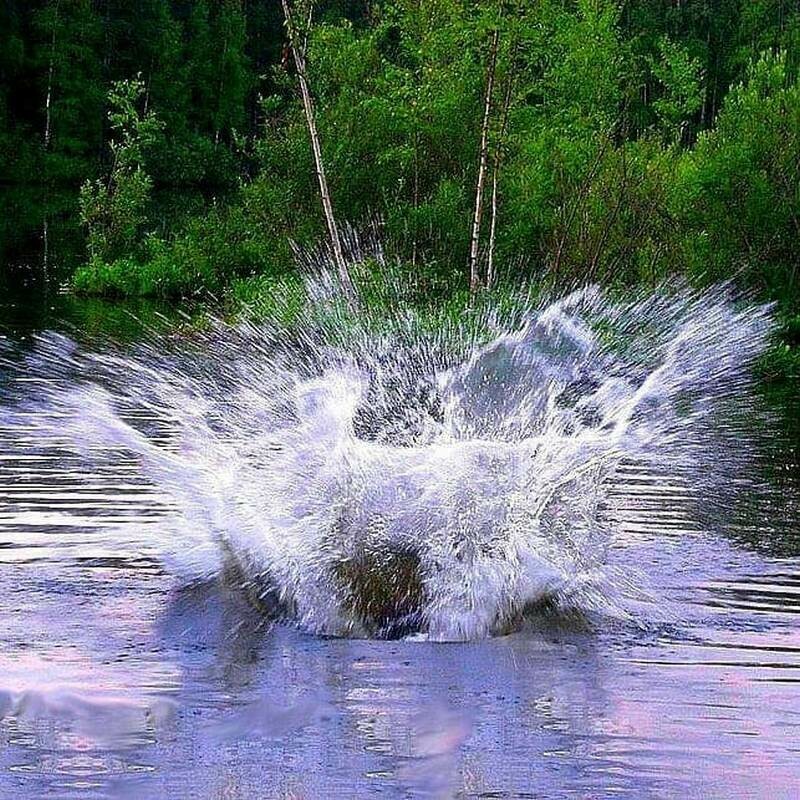 That’s why the lake has such a name: Shaitan means “devil” or “devil”, it appears as an evil spirit in Islam. So, the scary body of water has always been bypassed, people never bathed in it and were even afraid to fish here: no one wanted to anger the devil.

The lament of local women

However, there were some bloody stories about Shaitan, but they are no more than an old legend. The legend goes that there had never been a lake in the forest, but that two warring folk had lived there. One worshipped an evil spirit, Shaitan, and the other a good god. And one night there was a terrible battle between them. In the darkness it was impossible to see who was fighting with whom, and when the sun rose, the warriors who believed in the good god were faced with a terrible picture: their friends and loved ones were defeated, but not by the arrows of the enemy, but by their own weapons. 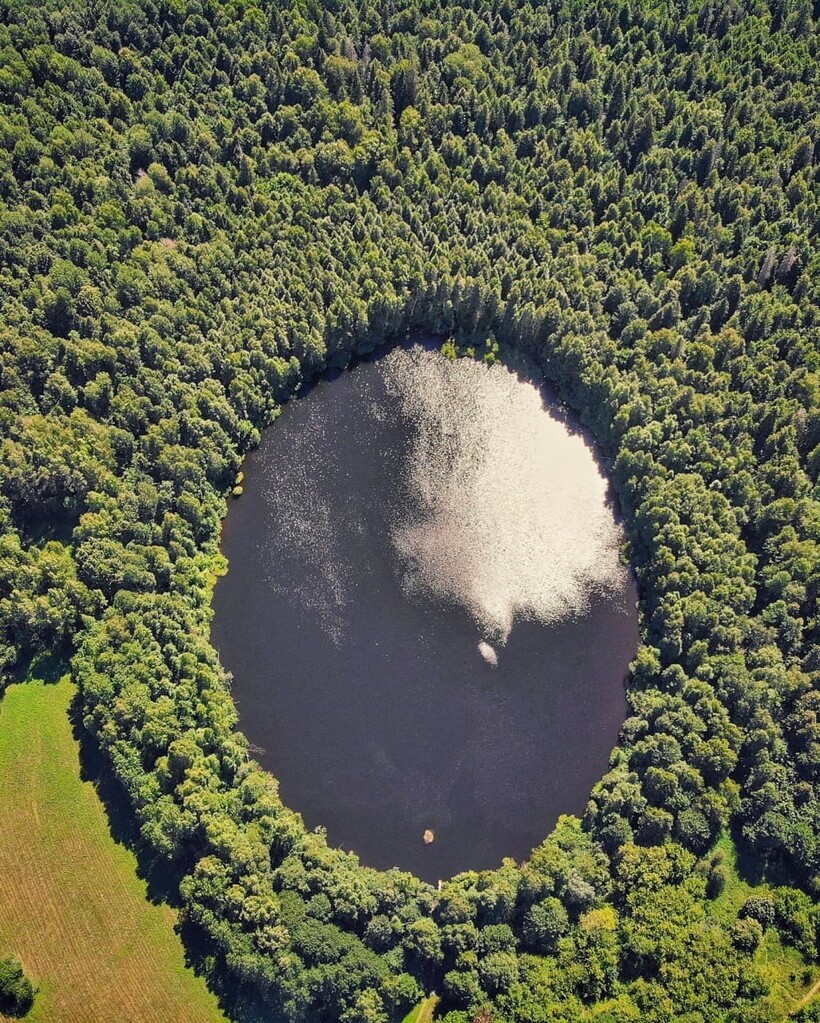 View of the lake from above. Photo: @olin1987/instagram.com

Then everyone decided that Shaitan had engineered the defeat, and the women began to weep for the dead. And they wept so long that the glade that had become the scene of the battle was filled with tears. And the earth became so heavy that it collapsed and turned into a lake. The water here, if you take it in your palms, is as crystal as the tears of those weeping maidens, but if you look at the lake, it is dark, almost black, like frozen blood.

Now do you understand why the lake has been so feared for centuries?

However, some people did swim here, but not of their own free will. In the 19th century these lands belonged to the landowner Mosolov, who built a house on the lake shore. 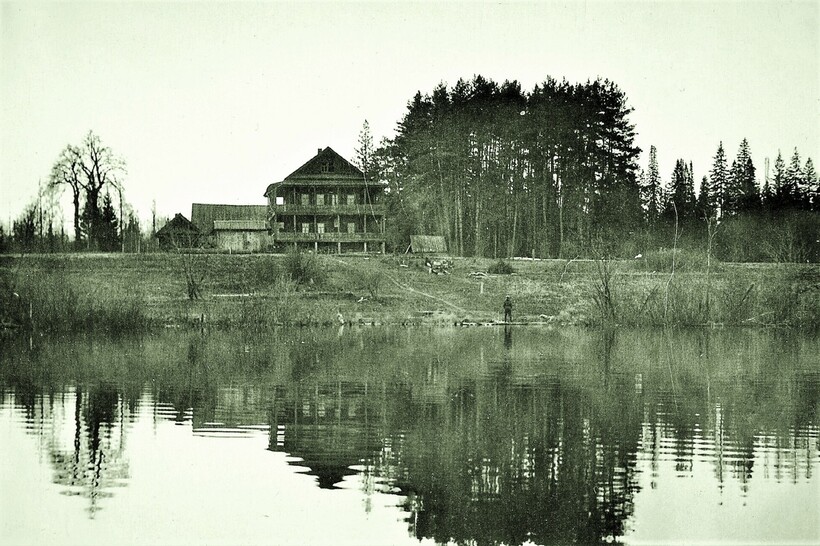 Mosolov’s house, which stood for more than a century. The end of the 1960s. Photo: rodnaya-vyatka.ru

On the Mosolov’s house on the shores of the lake Mosolov built a house for over a century, which was standing on the shore of the lake. The guilty person was taken out in a boat to the middle of the lake and lowered into the water. He had no choice but to swim to the shore. After this punishment, cutting in the forest stopped, because everyone was afraid of the lake.

READ
What to know about the Teletskoye Lake in Altai

Who else but an evil spirit?

But, of course, scientists in the twentieth century managed to solve the riddle of Devil’s Lake and debunk all the myths that shrouded it. There is no evil spirit in the lake, and the reason for the lake’s strangeness is its karst formation. Hence the fountains, the bubbling water, and even the drifting islets. The fact is that there are karst wells at the bottom of the body of water, through which the lake is filled with underground water. However, these holes periodically get blocked by bottom sediments, turning into a bottle filled with water. As a result, the spring at one point bursts the plug and forcefully comes out. 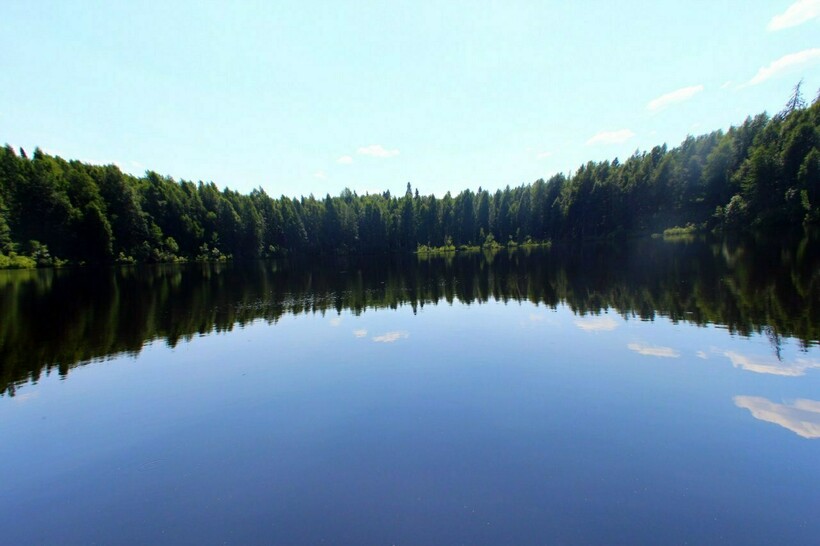 On the surface of the body of water, it looks as if some area starts to boil, the water is boiling here, and for several hours as well. And sometimes you can observe a rarer picture: the source bursts out as a three-meter fountain (however, the column of water sometimes ten meters in height). Imagine the sounds that surround the forest lake: muffled murmurs of bubbling that echo among the trees. Do you agree that such a picture may puzzle even a modern educated person for a while?

As for the nomadic islets, they too can easily be explained. Zybuns, a carpet of moss, grass, and small trees, stretch along the banks of the Shaitan. As they decompose, they form a semi-liquid soil, but it’s a very nutritious soil, so fresh plants are actively growing here. This, by the way, is how bogs appear: quicksands simply grow over the surface of reservoirs for decades. This is exactly the kind of shore at Shaitan. But when the water level in the lake rises in the spring, the water tears away these quicksands, sending them free floating. This phenomenon also occurs after underground springs fountain, which is why the islets drift on the lake. 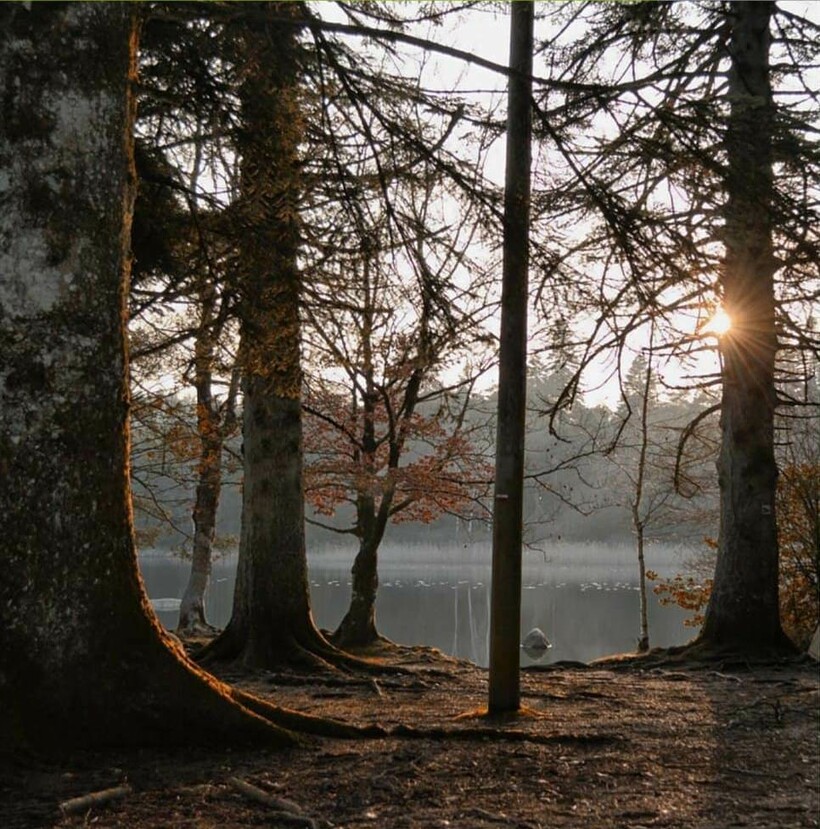 True, you can’t always see them, because often these green nomads get swept ashore. But sometimes they are especially impressive: for example, when a company of four can stand on a large quicksail. In addition, the water often overturns these islets, and they float with their roots outward.

So, no Shaitan lives here, but when you see a fountain in the middle of a quiet forest lake and an island floating upside down, you involuntarily think about some unknown force. But the power of nature should not be written off.

By the way, here we told you about other lakes in Russia, which may have their own Loch Ness monsters.