Synevyr is the largest mountain lake in Ukraine. It is surrounded by legends and mysteries. Tourists from all over Europe come to the Carpathian Mountains to admire its blue waves.

Lake Synevyr is literally the legend of the Carpathians. It is the largest and most mysterious lake in the mountainous Ukraine. You have to look for this pearl among the rocks and forests of the Inner Gorgany mountain range, in the lands of the national park of the same name. 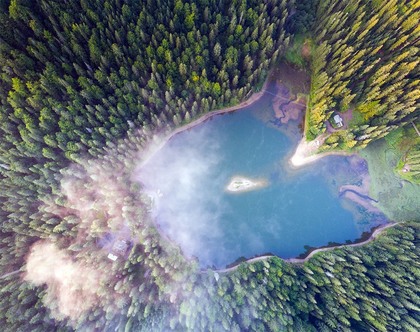 Sea Eye of the Carpathians is located at an altitude of about a thousand meters above sea level, its maximum depth is 24 meters. Synevyr is located high in the mountains and its waters are so deep that the lake is not warm even in summer. On the hottest days only a meter or two of water is warm, but you should dive deeper – and you will be burnt by icy cold.

When you dive deeper into the lake, you’ll get burnt by the icy cold. The lake was created by an earthquake, and three mountain streams flow into it, keeping the water level high at all times of the year. The smooth surface of the lake sparkles with blue, but a small island protrudes from the water exactly in the middle. This picture looks like a blue eye with a dark pupil in the center, so Synevyr got its second, very romantic name: the Sea Eye.

Synevyr is a cult place for tourists. Here come hikers with backpacks and tents. They go to the lake by cars and buses to admire the beauty of the Sea Oka. Arrange excursions from nearby villages. Therefore, the area around Synevyr is well equipped: built viewing platforms, installed decorative sculptures. But all these “signs of civilization” are so skillfully integrated into the landscape that they do not spoil it.

The lake is surrounded by old Carpathian firs – Smerek, it is very easy to breathe here due to the scent of pine, which fills the air. Although the surroundings of this tourist gem are always crowded, it is quite possible to meet wild animals here. The territory of the nature park is under protection, hunting, logging and any other interference with wildlife is prohibited in this area.

The sculpture that adorns the lake depicts two lovers: a boy named Vir and a girl Xin – according to the legend, it is from their names that the name of the lake was formed. The height of the monument is 13 meters. Who are the legendary lovers, in whose honor was named the large Carpathian lake?

The sculpture at the lake Synevyr

Legend tells of the daughter of a local count, whose eyes were blue and deep as the sky. One day while gathering flowers in the forest, she met a shepherd who played the flute and fell in love with him. The count’s daughter began to come into the woods more and more often to listen to the shepherd play the flute. The lovers continued to meet even after the count’s explicit prohibition – and then the enraged father ordered the shepherd to be killed by throwing a stone over him from a mountain. When Xing learned of her lover’s tragic fate, she embraced the stone and wept bitterly. Her tears formed an entire lake that still hugs that ill-fated rock to this day.

How to get to Sea Eye

If you come to one of the local villages to ski or just relax with your family, you are likely to be offered a day trip. In the village of Nizhny Studeny it’s easy to take an excursion to Synevyr – you’ll be taken to the lake and shown where you can have a picnic and where it’s better to just admire the views.

It is not difficult to get to the lake by your own car – you just need to get to Mezhigorie, and then turn to the village Synevyrska Polyana. The lake will appear a few kilometers to the north. You shouldn’t rely on public transportation, because the bus goes to Synevyr Glade only once a day. However, there is a hotel with a restaurant near the lake, so if you won’t manage to get out of the woods before dark, you will have a tasty dinner and a warm bed.

READ
All the most interesting places of Lake Baikal

Synevyr attracts hikers, but there is one huge problem: camping around the lake is not allowed, not to mention making a fire – an attempt to get in the protected forest fire will turn out to you a huge fine. That is why you can come to Synevyr only to admire it, to dream and leave without littering. However, there are many ecological trails leading to the lake, and you can include it in your hike plan. But you should take into account that you are going to spend several hours on Snevir.

To get to the lake is not difficult from Gicha mountain valley – from there you should go down to Sloboda village and find a blessed spring with drinking water – and from the spring to the Sea Eye of the Carpathians will not be far at all. If you don’t plan to go back to Sloboda, you can draw drinking water from the spring. Where you can stay for the night? From the lake it is easy to get to the Ozirna meadow, it’s a beautiful view and no one will stop you from making a fire. You can also see Synevyr from the meadow, so if you are a photo enthusiast, you can take some great shots. 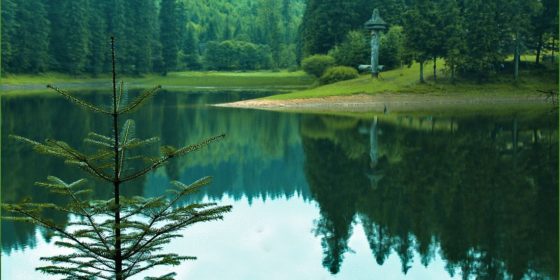 When the rich count found out that his daughter and a simple shepherd fell in love, he forbade the young people to meet each other, and when they did not obey him, he ordered them to kill Vir. The order was carried out almost immediately: the servants waited for the right opportunity and threw the young man off a cliff.

When Shin (as she was nicknamed because of her eyes of amazing blue color) heard about her lover’s death, she raced to the place of tragedy, wrapped her arms around a rock and wept. She wept so long that a lake of crystal clear blue water formed around her. And the stone near which she wept became an island in the center of the pool.

READ
Lake Victoria in Africa, on the world map

Since then the lake is called Synevyr, and on its shores in the Carpathians people put sculptures of couples in love carved from wood – newlyweds from all around come here to take pictures: Synevyr legend says that the lovers who arrived here on such a day, will never part and will never stop loving each other.

If you look at lake Synevyr (or as it is called also Sea Eye) from the nearby summit of Ozernaya mountain (1.5 thousand kilometers), then the lake really looks like a transparent blue eye with a pupil (it is played by a small island in the center) and thick luxuriant lashes (the lake is surrounded by a magnificent forest of coniferous and beech trees).

Located on the territory of western Ukraine, 153 km from Lviv to the south, Sea Eye is the largest lake of the Ukrainian part of the Carpathians, the mountain system in the center of Europe.

The largest lake in Transcarpathia is a part of the national park of the same name and is located within the mountain range of the Inner Gorgany. The area of the park is vast and exceeds 40 thousand hectares, six of which belong to the reserve zone (the length of the park from north to south is 30 km, and from east to west – 20 km).

The flora of the reserve is extremely rich: there are more than 900 species of plants, 38 of which are included in the Red Book of Ukraine. There are also many animals – zoologists have counted 236 species, including 22 rare species. And at a distance of 8 km from the Sea Lake there is even organized a rehabilitation center for brown bears, where animals that suffered from human hands live. They are not aggressive and do not scare people, so (but still not approaching) here is a unique opportunity to observe the bears’ way of life.

Peculiarities of the lake

Is formed the largest lake of the Ukrainian Carpathians relatively recently: about 10 thousand years ago after a powerful earthquake, after which the rocks fell down and blocked the path of the river, thus forming a dam and created a hollow, which is quickly filled with fast rivulets.

Lake Synevyr is located at an altitude of 989 m above sea level. The area of the Sea Oka is about seven hectares. The maximum depth of the lake is about 24 m (the northern part of the lake is much deeper than the southern part).

In the center of the lake is a small island called Lovers’ Island. In the middle there is a heart made of twigs (it was made for his beloved by the hero of the show “All for You”, before declaring his love to her and proposing to marry her). They say that if you stand on this island and ask the lake very strongly for a big and strong love, the Sea Eye will certainly give you the desired one.

On one of the shores there is a 13-meter wooden composition, which embodies the legend of Synevyr: one figure represents Sin, the other one represents Vir. Four mountain rivers and a lot of underground sources feed the reservoir. Water does not stagnate here: fifty meters from the southeastern shore, the brook of lake water, which is a tributary of the Teribli River, makes its way through the mountainside and flows down. Thus, the Sea Eye, even during numerous precipitation events (and there are many here) or snow melt, never overflows its banks or floods its surroundings. 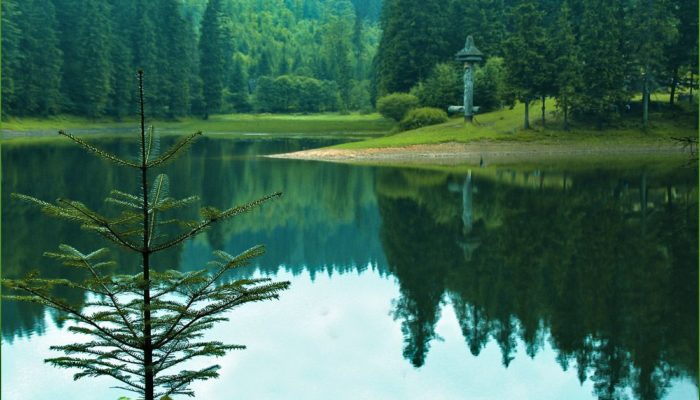 Near the lake there are springs with drinking water and streams with glycerin water for washing. The lake is home to a huge number of trout. It’s not allowed to catch them, but it’s allowed to feed them – these fish are rather ravenous and when fighting for food, they envelop instantly the piece thrown to them and make up with it in a couple of seconds, showing in this way the very real attraction.

The Climate of the Sea Ocean

There is nothing surprising that the water in the reservoir is constantly cold: it simply does not have time to warm up. The Synevyr weather is variable: even during the summer months at night and in the morning it is quite cool – from five to eight degrees of heat. And during the day the average temperature of July, the hottest summer month of the year, is 16.5 ° C (in January these figures are -5 ° C).

Healing air of the reservoir

The area here is not only extremely beautiful but also healing: clean mountain air with people who have lung diseases works wonders and can cure even people suffering from tuberculosis. Ukrainian doctors often advise their patients to go to the pond and climb to the top of nearby Mount Ozernaya: not infrequently, after such a hike (and the way up takes about five kilometers) disease receded forever.

Locals explain such healing in their own way, saying that after the patient climbs to the top and reached the place where his eyes will see the Sea Eye, the disease, frightened by the lake look, in fear escapes forever.