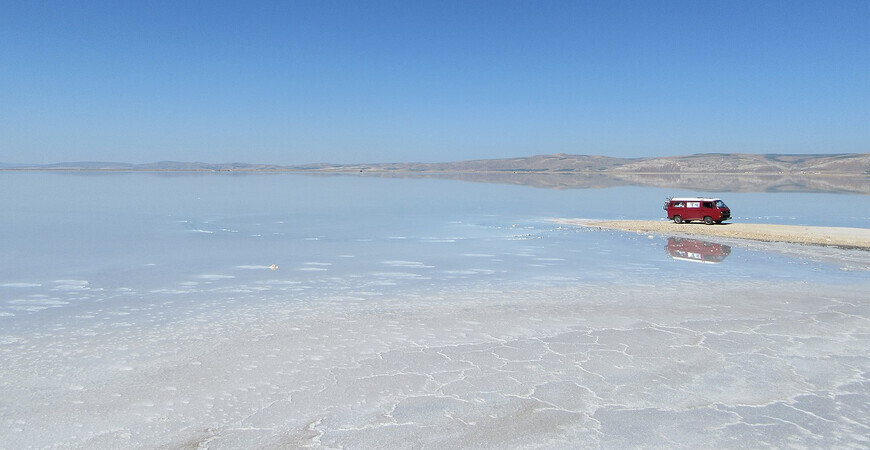 Turkey’s second largest lake is located in the central part of the country, on the road from Ankara to Cappadocia. Lake Tuz is 80 km long and 50 km wide but its maximum depth is less than 2 meters. It is second only to Lake Van in Eastern Anatolia in terms of area.

Lake Tuz has no drains, fed by streams, sediments and underground springs, so its water salinity is very high – about 340 grams of salt per liter. During the summer months, when the moisture evaporates, in some places the bottom of the reservoir is exposed, covered with a thick layer of salt. Sometimes it is up to 50 cm thick, which makes it possible to walk on the lake on foot. In the winter, Lake Ace is re-infused with water, but it is not suitable for swimming in any season.

There are three salt mines on the shore, producing nearly 70% of all the salt consumed in the country. Because of this, it is difficult to approach the lake – the enterprises fence off their territories with fences. However, there is still an entrance for tourists with parking, restaurants, and a commercial pavilion.

On the Internet you can find very picturesque photos of Lake Tuz with pink water and flocks of graceful flamingos. You can see with your own eyes such beauty in the rainy season, in the southern part of the reservoir, where there are several islets. However, to get there is problematic – prevented by fences and swampy ground.

Near the southern shore grows algae of the species Dunaliella bracken. It happens that after heavy rains, when the salinity level of water decreases, the algae begin to actively produce beta-carotene, which is why the water turns bright pink or even red. By the way, flamingo’s plumage turns pink also because of dunaliella – birds eat crustaceans, for which algae serve as food.

Besides flamingos, Lake Tuz is the nesting ground of almost 80 species of birds: white-fronted goose, steppe kestrel and other local species. The deserted character of the lake and the possibility to swim even in winter, as the reservoir never freezes, attract the birds.

To support the unique ecological environment, in 2001 the Turkish authorities granted Lake Tuz the status of a Specially Protected Area.

There is an old legend connected with the Lake Tuz in Turkey. According to it, once upon a time there was a vineyard growing on the place of the salt pond. It was owned by an elderly miserly woman. One day a tired dervish passed by and on seeing a fertile garden, he asked the owner for a bunch of grapes to quench his thirst. But she replied that she could not help, since this year’s crop had perished.

The dervish did not believe the woman; he got so angry that he wished her to turn into salt and ice in a fit of rage. His curse immediately came true and the vineyards were replaced by a huge salt lake.

In the reviews of tourists who have been to Lake Ace, you can find some advice on visiting the reservoir. Many write that you should bring aqua shoes or flip-flops – a long walk barefoot on the bottom of the lake is uncomfortable, because the salt crystals hurt your feet. Also be sure to take sunglasses – in the daytime the sun is reflected in the pond as in a mirror and strongly blinding. For the same reason it is worth stocking up on sunscreen with a high protection factor.

Among the rave reviews, sometimes there are negative points. Most of them are related to the organization of the tourist zone, where there are pavilions with salt and cosmetics. Often salesmen are too intrusive and insistently try to smear salt on tourists’ hands, showing that it is very useful. Many people are uncomfortable with such services.

The main thing tourists go to Lake Tuz in Turkey for is a photo shoot. The shallow depth of the reservoir allows you to take pictures with the effect of walking on the water. Especially beautiful photos are obtained at sunset, when the rays of the setting sun are reflected in the lake. You can take such pictures at any time of the year, but in summer you’ll have to go farther from the shore to get to the water.

A full dip in the salt water will not work, it’s difficult to find a place with sufficient depth. It’s better to confine yourself to a walk not far from the shore and to wash your feet. Just do not forget to wash off the salt from the skin and clothing. You can use a paid shower or bring fresh water.

Salt Lake Tuz is considered medicinal, it is rich in many different minerals and is actively used for cosmetic purposes. Creams, masks and scrubs on its basis, the salt itself and souvenirs are sold in stores on the shore.

How to get to Salt Lake Tuz in Turkey

Lake Tuz is located 150 km from Ankara and 105 km from Konya. You can get to the lake as part of a tour or on your own. Many travel agencies in Ankara organize trips to Lake Tuz and sightseeing buses to Cappadocia usually stop at the lake.

If you want to go to Lake Tuz on your own, you should leave Ankara and take the highway D750 southwards, in the direction of Cappadocia. The small town of Sheriflikochesar, the nearest settlement to the lake, will serve as a guide. The trip by car takes about 2 hours. Going along the highway you will see the exit to the lake, which is located in the northern part of the lake.

Route from Cappadocia to Tuz Lake on Google. Maps:

If you do not have your own car and rental is not suitable, you can order a transfer at the hotel or a special service KiwiTaxi.

Once upon a time Lake Tuz was considered the second largest lake in Turkey. Hundreds and even thousands of flamingos used to go there to find food and make their nests. The place was also very popular with people – some wanted to see it dyed pink, while others took a dip in the mineral-rich water. But today Ace Lake looks like a puddle at best, and sometimes it dries up completely. According to some scientists, Ace Lake is on the verge of extinction. Scientists have recently studied the data that was collected from satellites in Earth orbit. From this data, images have been created that clearly show how the lake has all but disappeared in just a few decades. Let’s take a look at these images and find out what caused the disappearance of the once huge lake? 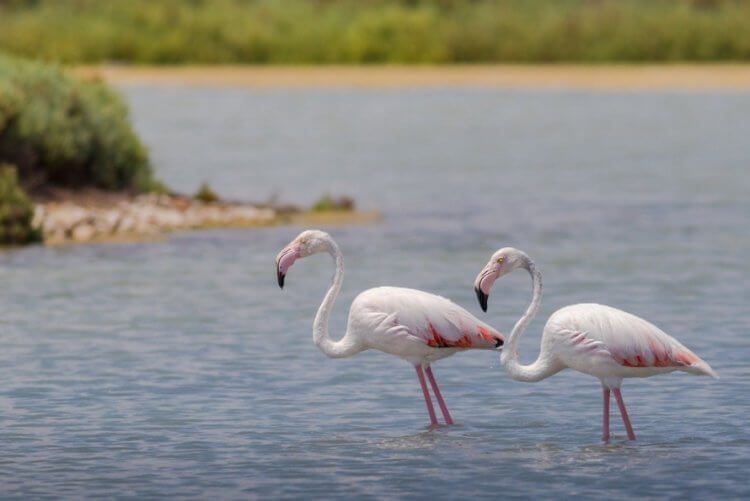 Lake Tuz is located 150 kilometers from the Turkish capital Ankara. In the best of times, the lake had an area of 1,600 to 2,500 square kilometers. It was fed by several sources, the main of which were underground waters that originate in the Turkish Taurus mountain system. The lake also received its water from the rains that fell in large quantities in the spring. 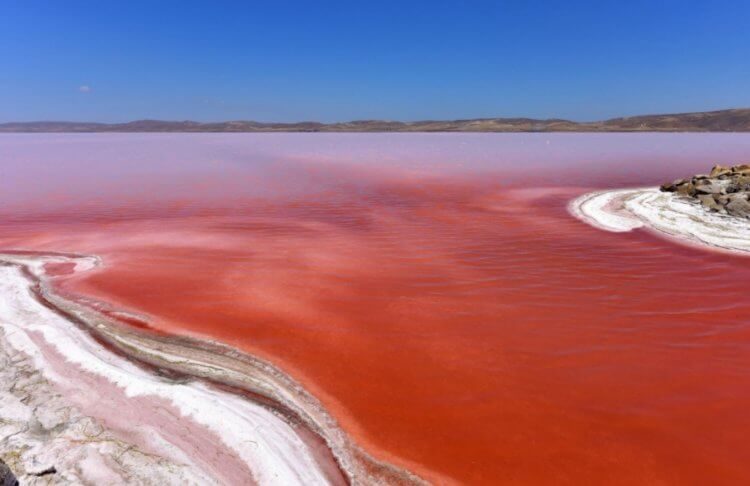 Lake Tuz, like many others around the world, is sometimes colored pink by microscopic algae

But today there is virtually no water in Lake Tuz, and there are at least two reasons for this. First, there are more and more droughts in Turkey – even the report of experts on climate change and the environment testifies to this. Secondly, the Mediterranean basin area is the most affected by climate change. Thus, if the temperature has risen by 1.1 degrees Celsius around the world since pre-industrial times, in this region it is 1.5 degrees Celsius. 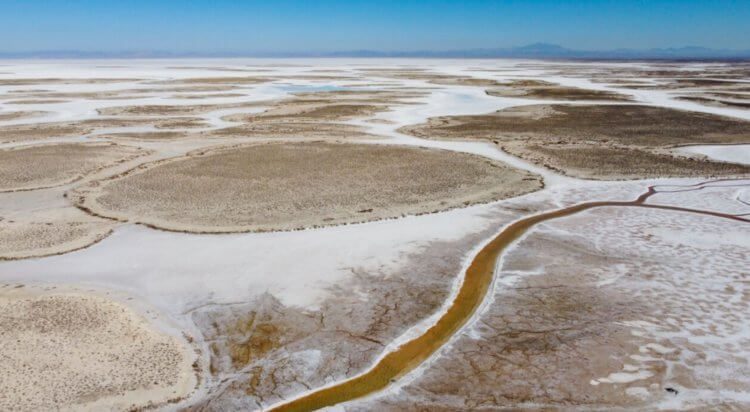 Today Ace Lake is suffering because of global warming

How is Ace Lake disappearing?

Researchers led by Professor Fulya Aydin-Kandemir recently decided to find out exactly how Lake Tuz has changed over the decades. To do so, they studied data that was collected by Landsat orbiting satellites between 1985 and 2016. Because these satellites are able to recognize different types of surfaces, scientists were able to find out exactly what the lake represented during different periods of time. The results of the scientists’ observations were published in the journal Regional Environmental Change. 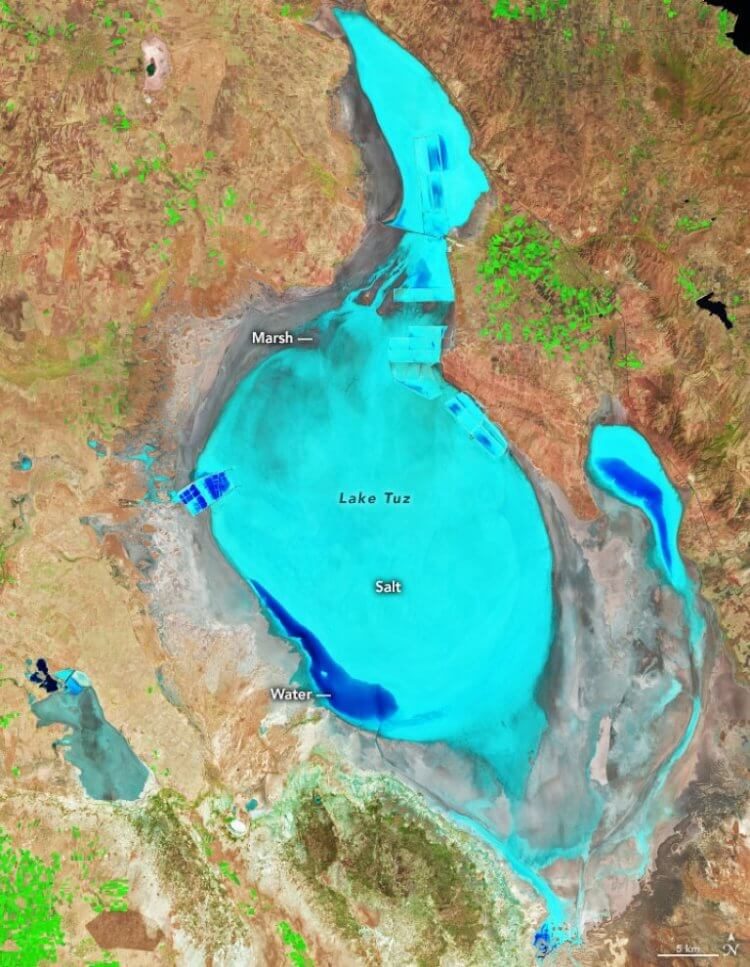 Image created thanks to the data collected by Landsat 8 satellite

Interesting fact: The Landsat research program was launched in the 1970s. Thanks to it, scientists learned a lot of interesting things about the state of the Earth’s surface and the changes that occur on it. In the images below, the water in Lake Ace is marked in blue, the marshes are shown in green, and the salt is highlighted in gray. You can notice that before 2000, there was plenty of water in the lake. In 1992, the water level dropped significantly, but this was considered relatively normal – at that time, there was a drought in Turkey. But even this could not completely drain the lake and the water covered about 16% of its surface. But at the moment things are much worse. For example, in 2021 there was so little water that the flamingos, which flew in for food, simply died. 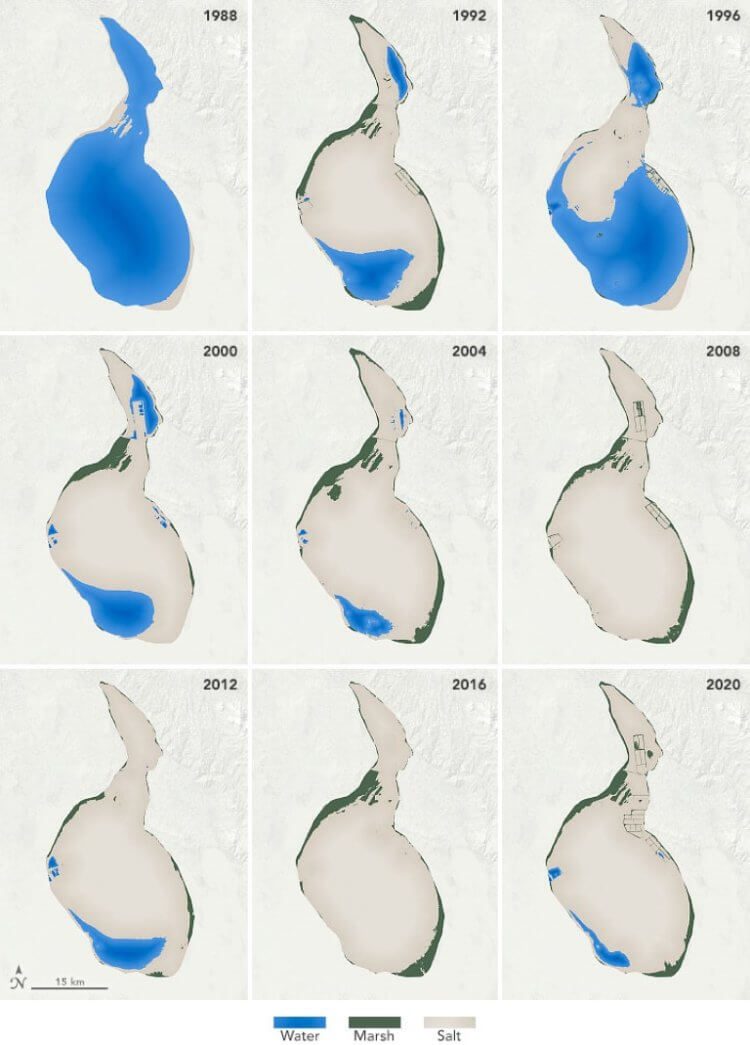 How Ace Lake has changed over the decades

The presence of constant water in the southwestern and western parts of the lake was vital to flamingo reproduction, because the bacteria they feed on were concentrated in these very areas, where salinity was lower, said the author of the scientific paper, Aidyn Kandemir. Report on the death of thousands of flamingos in Lake Tuz

The reason for the lake’s drainage

But why was the lake able to survive droughts in the late 20th century, and then suddenly lost its vitality after the 2000s? Researchers have observed that the emergence of serious problems with Ace coincided with “overuse of the groundwater and surface water resources that feed the lake.” For example, people have altered the flow of some rivers to irrigate farmland. And other rivers were blocked by dams to provide drinking water for the inhabitants of Turkish settlements. In addition, when droughts led to a shortage of surface water, people began to actively deplete the groundwater, which remained almost the only hope for Lake Tuz. 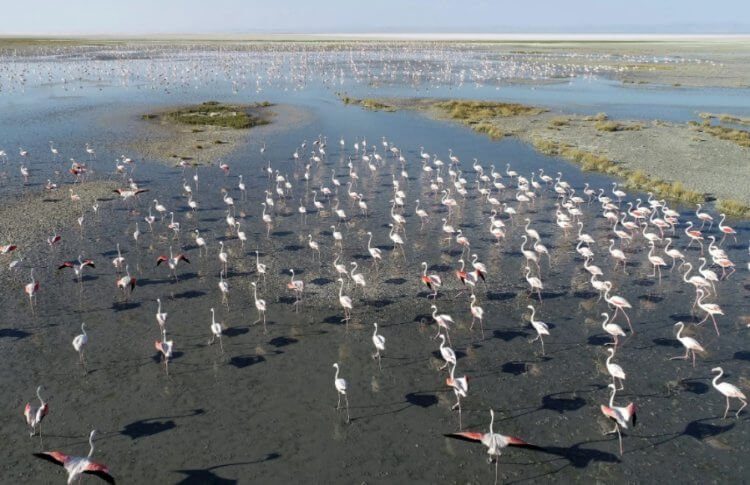 Lake Tuz was indeed the habitat of thousands of flamingos

Researcher Aydın-Kandemir noted that at the moment it’s impossible to predict the exact fate of Turkish Lake Tuz. Global warming will certainly negatively affect the water level, and if people do not stop using the sources which feed the lake, it will certainly disappear. And nobody is going to stop the exploitation of springs – where else are people going to get water from?