Seeing the blue surface of the lakes, shimmering in the sun in different shades, you can not even think that very close to the mountain, which is a year are bloody fights.

The formation of Bande Amir is considered magical, one might even say fabulous. Perhaps that is why the authorities have created a national park here.

The strangeness and fabulousness of the lakes has always amazed the local population and gave rise to more and more ideas about their origin. They rise at a height of 3 kilometers. They are surrounded by the magnificent mountain peaks of the Hindu Kush. They are quite young and are still growing along with the lakes.

At first glance, it may seem that the reservoirs are absolutely identical to each other. However, they are not. They differ in size, depth, and have their own special name. The common name of the complex of lakes is translated as “Ali Dam”. It is so named in honor of the Caliph and the first Imam Hasan Ali.

The largest lake is called Bande Zulfikar and stretches for 6.5 kilometers, and the smallest is Bande Panir with a diameter of only 100 meters.

Each lake is separated from each other by rocky formations resembling partitions. They are composed of travertine, a special limestone that, when weathered, enriches the waters with carbon dioxide. It is the carbon dioxide that gives the body of water such a beautiful soft blue color. Also, Bande-Amir contains a lot of carbon dioxide, which gives the water an unusual taste. This chemical composition is not very favorable for bacteria, inhibiting their growth and development.

The climate in the lake is dry and the mountains have no vegetation. Because of this, the blue smooth surface of the lakes against the background of lifeless mountain ranges looks spectacular and very unusual, attracting tourists and travelers for years and even centuries.

The blue lakes are very strongly associated with the history of the state. The first people appeared here more than 3 thousand years ago. In 330 BC the territory of Bande Amir was conquered by Alexander the Great. After the death of the emperor, the land went to the Seleucids.

In the 1st or 2nd century, Buddhism spread in the lake area and even a Buddhist temple was built.

By the middle of the 7th century, Bande-Amir became a part of the Kabul-Shahi principality. A little later, an important event in the life of Afghanistan happened – the Saffarid dynasty brought Islam to this land. In the 18th century, the Mughal Empire became the rightful owner here.

For many years, the inhabitants of Afghanistan believe that the lake is a creation of God, created not by nature, but by higher forces. And some attribute the emergence of Bande Amir to the arrival here of Caliph Ali. Every year hundreds of thousands of tourists come to the reservoirs to pray and pay for their sins.

The lakes and surrounding serpentine area are very popular with tourists and residents of Afghanistan.

To attract even more tourists, authorities in the middle of last century were going to organize here a state nature reserve. However, the unstable political and economic situation prevented the idea. But despite this, many foreign travelers still came to the lake. In 1970 the maximum number of visits was fixed.

In 1980, because of military operations in Afghanistan, the number of tourists declined sharply.

Many years later, in 2004, to remedy such a precarious situation, the authorities apply for inclusion on the UNESCO list. To reinforce their actions, they create a national park on the lakes called Bande Amir.

What is surprising is that no matter how many years of war have gone on, the lakes are completely quiet. None of the enemy states have views of the bodies of water. That’s why the local forests have preserved animal populations that are rare in Afghanistan.

Only local farmers grazing their livestock on the local fields threaten the lake area. Because of this, the soil is at risk of erosion. The situation is the same with the milk carp, which are harvested with the help of pomegranates. This fish is on the verge of survival and being listed in the Red Book.

In 2008, the authorities of Afghanistan created a set of rules to be observed by the population regarding the lakes, but they are not respected.

The six lakes of Bande-Amir, glorified in the legends of the peoples of Afghanistan, are elevated by the will of nature to a height of three kilometers above sea level. The Hindu Kush mountain ranges extend around them. The mountains are still relatively young by the standards of historical geology and continue to rise, obeying the tectonic forces, and the lakes rise with them. From the outside it only seems that the lakes are similar to each other, in fact, they differ in area and depth, and each has its own name. The common name of the lakes, Bande-Amir, is translated as “Ali’s dam” so the locals, mainly Shi`a, paid tribute to Abul Hasan Ali ibn Abu Talib al-Quraishi (599-661), the fourth righteous caliph and the first imam of Shi`a Islam. The largest lake is Bandeh Zulfiqar which is 6.5 km long. The smallest is Bande-Panir, about 100 meters in diameter. The deepest is Bande-Haybat: its average depth is 150 m. The lakes are separated from each other by natural barriers – the rocks that form natural dams. The rocks are made of travertine (lime tuff) which is subject to weathering and saturates the water with carbon dioxide. The latter, when combined with water, gives the lakes a characteristic turquoise color. The water in the lakes of Bande Amir is saturated with carbon dioxide. Once dissolved in water, it transforms into a weak carbonic acid, which gives the water a characteristic taste and prevents the growth of bacteria. The climate of these places is arid, the mountains are almost devoid of woody vegetation, and that is why the sight of cool lakes in the middle of lifeless stone shores rising high right out of the water has always impressed the travelers accompanying the caravans along the section of the Great Silk Road that passes here. The Bande Amir Lakes were in the very center of Afghanistan, which was desperately fought for by the local rulers and foreign invaders, and therefore it is not surprising that the most dramatic events in the history of the country unfolded on its shores. The lakes are located near the Bamiyan valley, which since ancient times has been a busy trade route: it is the only convenient passage through the Hindu Kush mountain system. The fate of the lakes is inextricably linked with the history of Afghanistan. The first settlements here appeared 3 thousand years ago. In 330 B.C. these lands were occupied by the troops of Alexander of Macedon and after his death the land went to the state of Seleucus. In I-II centuries Buddhism spread here through the Mauryan Empire and Buddhist monasteries were founded. By the seventh century, the area was under the rule of the Kabul Shahi, and in the ninth century, events occurred that radically changed all life in this area: the Saffarid dynasty brought Islam here. In the 18th century, it was already the land of the Mughal Empire. Nowadays, the locals assure visitors that the lakes were not created by nature, but by some mystical forces who built dams and partitions. They are also full of confidence that Caliph Ali visited it once, so the Afghans treat the lake serpentine as a religious shrine and come here to pray. Bande Amir is a serpentine serpentine of six lakes located in the Hindu Kush mountains in central Afghanistan. Each of the lakes has its own name and history: the real – geological – and folklore – set out in tales and legends. The natural lake serpentine is one of Afghanistan’s most popular attractions. In order to attract the attention of foreign tourists the Afghan authorities in the 1960s. 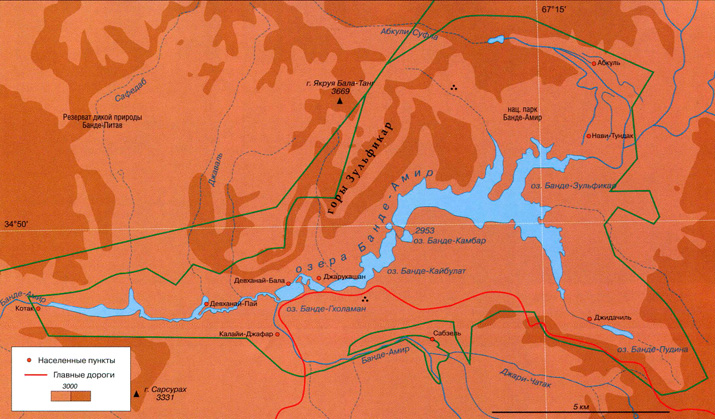 The idea of opening a nature reserve here, but political instability, the reasons for which can be found in the events of antiquity, prevented it. Foreign tourists, who had heard about the heavenly beauty of the lakes, visited these places at their own risk, and in the 1970s there were the most of them. But in the 1980s, the war engulfed the whole country and visits to the lakes plummeted. In 2004, the authorities of the country, trying to make Afghanistan more attractive in the eyes of the world community and to replenish the budget, applied for the inclusion of Bande-Amir Lakes in the list of UNESCO World Heritage Sites. To back up the application with concrete actions, they also reported in 2009 on the creation of Afghanistan’s first national park, Bande Amir. In the Hindu Kush, the Bande-Amir Lakes region has been relatively quiet despite the ongoing fighting throughout the country: none of the warring parties has shown any interest in this wilderness area. Therefore, species that have been completely exterminated all over Afghanistan are preserved here: the mountain goat (ibex), wild sheep, wolf, fox, and of birds – the unique Afghan snow finch. But it is not war that threatens this wonderful corner of Central Asian nature, but rather the peaceful work of local farmers: indiscriminate grazing destroys grasses, uprooting shrubs contributes to soil erosion, and fish – carp, called “milkfish” – are on the verge of extinction here because they are caught with pomegranates, which locals buy from the military, and electricity from autonomous generators. In 2008, Afghan authorities banned boats with gasoline engines from the lakes, but the ban is not enforced. To visit these places, you must be prepared for any trouble. The most important is the countless minefields that are scattered around the park and are not marked on any map. The local population living in the Bande-Amir Lakes area is almost entirely represented by the Hazaras – Muslims of Mongolian and Iranian origin. The life and culture of the Hazaras are poorly understood until today: the Hazaras themselves have never welcomed attempts by Europeans to get acquainted with their customs. The Bande Amir Lakes are located in the Afghan province of Bamiyan, the main attraction here are the grandiose 50-meter Bamiyan Buddha statues – the authentic evidence of the existence in this region of the center of Buddhism, long before the Islamization of the local population. The statues had been under construction since the second century for two hundred years. But the Taliban in power blew up the statues, claiming they were pagan idols and should be wiped off the face of the earth. The provincial capital, Bamyan, was the first city in Afghanistan to establish a tourist company that organized tours to the Bande Amir Lakes.