Lalibela is one of the oldest cities in the world whose underground temples are real masterpieces of engineering. They contain numerous artifacts of sacred significance to Christians.

The famous churches of Lalibela in Ethiopia must have been heard of by anyone interested in the history of Christianity. In this small town of no more than 15,000 people, one in ten inhabitants is a clergyman. Most of its inhabitants belong to the flock of the Ethiopian Orthodox Church.

The town received its sonorous name in honor of Gabre Meskel Lalibela, who ruled the country at the end of the XII century. Earlier there was a small settlement of Roja. After his death, the Ethiopian monarch, who founded the city, was elevated to the rank of saint.

According to a legend, after the Muslim conquest of Jerusalem, the king dreamed of creating in his country a perfect copy of it. Therefore, most of the buildings of Ethiopia’s Lalibela city fully reproduce similar structures of its prototype and even bear the same names. Even the river flowing through the settlement is called Jordan.

Before traveling to Africa, you should find out exactly where the sacred city of Lalibela is located. It is located in the north of Ethiopia, in the Symen-Wallo zone, which is part of the province of Amhara. The settlement rises about 2,500 m above the surrounding terrain.

Although at first glance the town does not seem too remarkable, many Christian pilgrims from all over the world consider Lalibela as the eighth wonder of the world. This is due to its main attractions – the unique underground temples carved out of solid rock. They have no analogues in any country in the world, so they are included in the list of world heritage of UNESCO.

Most of the rock churches in Lalibela date from the late 12th and early 13th centuries and were created without the use of cement or clay as binding materials. The slab beams are also missing. In total, there are 11 monolithic temples connected with each other by a complex labyrinth of underground tunnels. They are cut into the rock strata below the ground surface and feature a variety of decorative architectural elements. Here you will find Ancient Egyptian arches, Jewish Star of David, delicate Arabic lattices on the windows, Doric columns, and mysterious swastika symbol.

The process of building sacral structures in Lalibel was quite laborious. First, a hole of square or rectangular shape was drilled into the rock, from which a granite block was extracted. It was covered with paintings and beautiful ornaments, and then rooms with a vaulted ceiling were hollowed out inside it. They were also decorated with patterns with biblical symbols.

In some cases the church was built into an existing cave, simply by widening it and making new galleries in the thickness of the stone. According to scientists, several tens of thousands of people were involved in the construction process.

There is an interesting legend connected with the creation of the temples. It says that before he ascended the throne, King Lalibela was treacherously poisoned by his own brother Harbai. The monarch fell into a state resembling lethargy and was transported to heaven, where he spoke with God himself. God told him that He would save Lalibela from the effects of the poison, but that he should leave Ethiopia and hide in Jerusalem. After receiving a sign from above, he should return to his homeland, take the throne in Roch and build eleven churches. Lalibela was given detailed instructions as to exactly what they should look like. But his architects were not up to the challenge, so they were helped by angels.

One of Lalibela’s churches is rumored to contain the stone tablets of Moses with the Lord’s commandments to the Jewish people inscribed on them and an equally important artifact, the chariot of Zion. The cult buildings are divided into four groups:

READ
Church of the Intercession in Fili in Naryshkin Baroque

The temples of Lalibela even have a rudimentary water supply system, allowing to supply with artesian water not only the wells near the churches, but also the settlement itself, located on the top of the hill. There is a mysterious semi-darkness inside these religious buildings, and the bas-reliefs and frescoes are priceless works of art from the Middle Ages. The icons are placed directly on the floor.

Lalibela churches are open to the public from 12:00 to 0:00 daily. The cost of the ticket is 50 USD. All temples are active, so during the visit be sure to adhere to a strict style of dress: open shoulders, legs below the knee and no scarf on the heads of women are not welcome. Shoes must also be removed at the entrance. If you want to know more about the sacred place, it’s worth paying 100 USD – 150 USD for a guide from the locals.

Since there are no direct flights between Moscow and Lalibela, you must first fly to Addis Ababa, Ethiopia’s capital, using Gulf Air, Etihad Airways, Emirates, Aeroflot or many other airlines. The travel time is 10-11 hours and the cost of the ticket ranges from 18,000 rubles to 70,000 rubles.

Regular flights from Addis Ababa to Lalibela are operated by Ethiopian Airlines. After arrival, you should take a shuttle bus (fare 70 Br) to the city, because the airport is located almost 30 km from its center.

You can also take a bus from the Ethiopian capital to Lalibela, but it is tiresome: you will be on the road for at least 2 days.

If you want to get in touch with the roots of Christianity and learn more about Ethiopia’s culture and history, a trip to the unusual underground churches will broaden your horizons considerably.

One legend says that he who wishes to reach heaven must ascend to the top. All the great temples of the world conform to this statement, majestically raising their domes, spires and minarets above the earth to bridge the gap between the earthly and the divine. But in Ethiopia, a country where even the calendar has 13 months of the year, things are quite different. 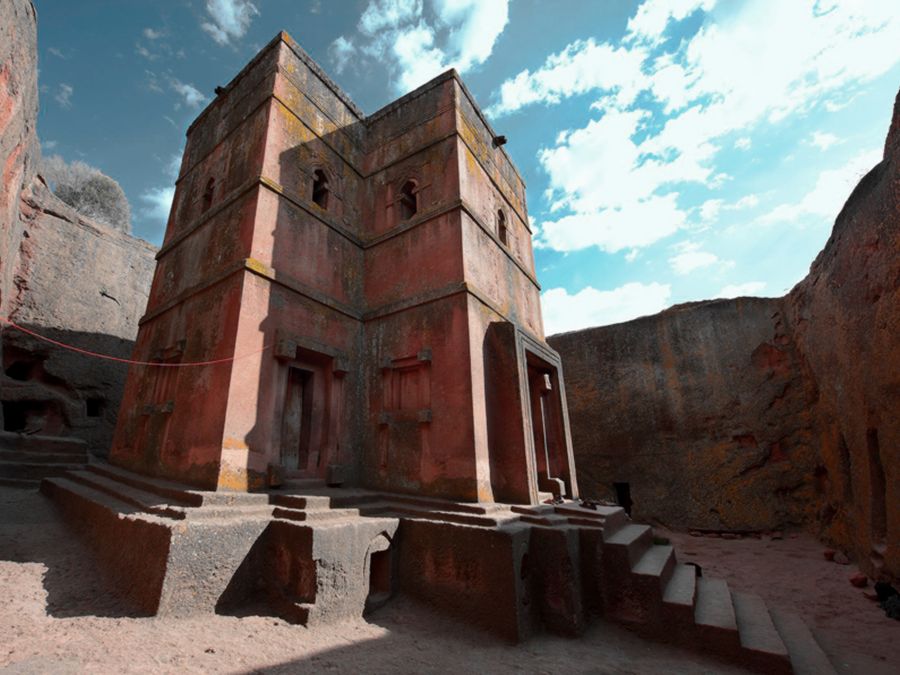 This African country is unique in that for a long time its main religion is Christianity, which developed in isolation from Rome and Constantinople. According to Christian beliefs of the Ethiopians, all the kings of the country descended directly from Solomon and the Queen of Sheba.

As for temples, the Ethiopians have never seen a pressing need to build high vaulted cathedrals or belfries of dizzying height. Ethiopian temples are carved into the rocks and are a kind of continuation of nature itself. 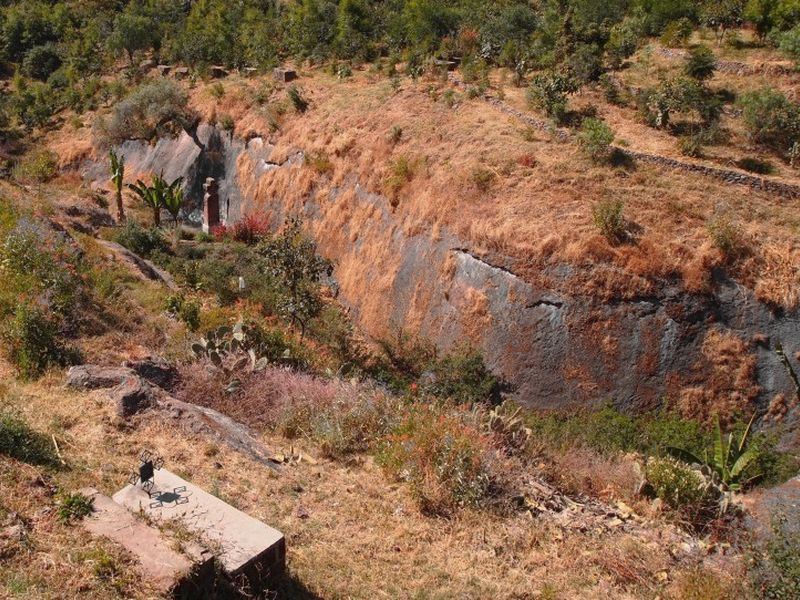 This is best illustrated by the churches of Lalibela. In this Ethiopian city there are 13 temples carved in the rocks, on which the settlement was founded. From the outside it is impossible even to guess that they are here. One can see the churches of Lalibela only if one climbs on the rocks themselves with their carved openings going into their depths. It is still a mystery how these unique underground temples were created. 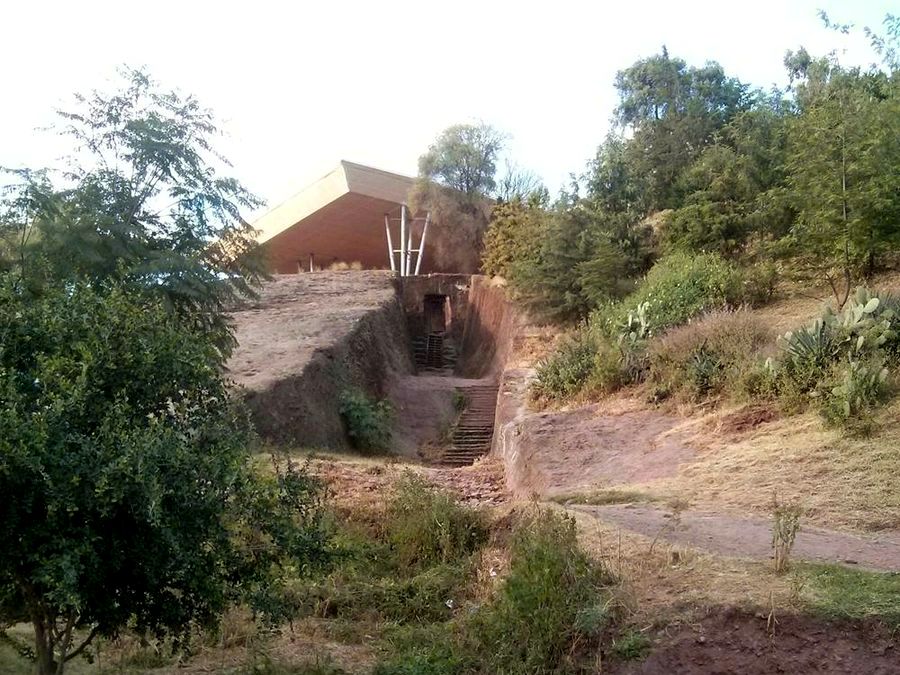 Ancient legends say that a vision with churches in the rocks came to the dream of King Lalibel, who ruled the country in the XII century. This is what prompted him to erect a “New Jerusalem” in the rocks on which the city rose. Nowhere is it documented exactly when the construction of the rock churches of Lalibel began. Since their creation seems to be a true miracle, one cannot help but be reminded of the story that these temples were erected with the help of angels in just one night.

An impression of the churches of Lalibela

Getting to Lalibela is not easy, but it’s worth it. At first you don’t know where to go, but then you understand what to see and how to look. It is noticeable that the temples here are arranged in two groups. The northwest group consists of seven churches, which include Beth Medhaneh Alem, the largest monolithic church in the world.

READ
Stavka of Gull, a frame church in Norway 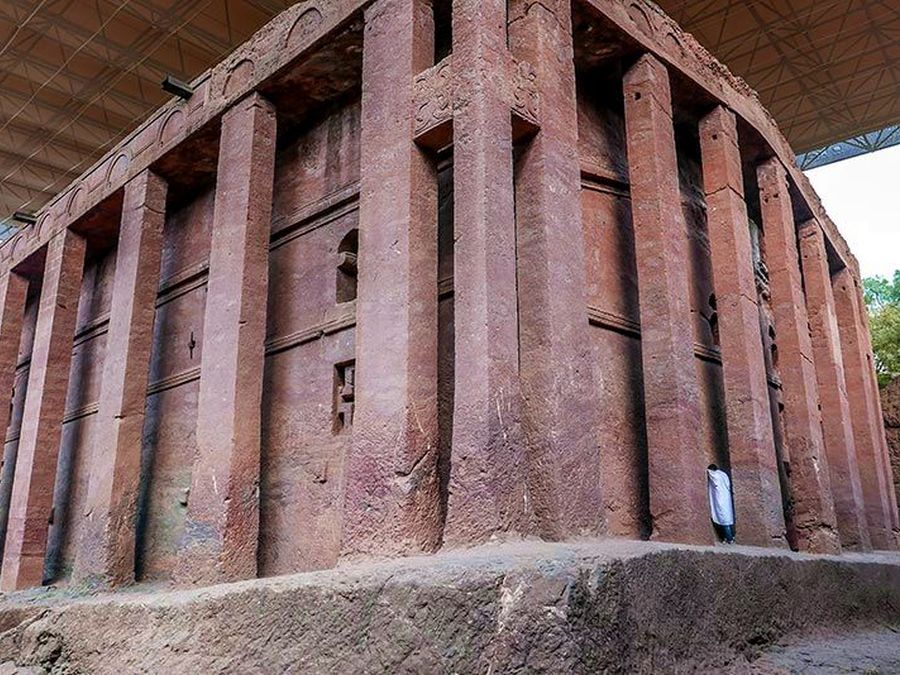 It is an astonishing structure. To the inhabitant of a megalopolis its height is insignificant – only 12 meters. But in the desert, such a structure looks majestic, and it is emphasized by 72 powerful columns, carved in the rocks. From here a narrow tunnel leads to the hidden church of Bete Maryam, dedicated to the Virgin Mary. Here the beautifully carved crosses are very memorable.

Some churches resemble dark cells, the effect of the mysterious atmosphere only intensified by the priests dressed in light clothes, sitting in secluded corners and reading the Bible. 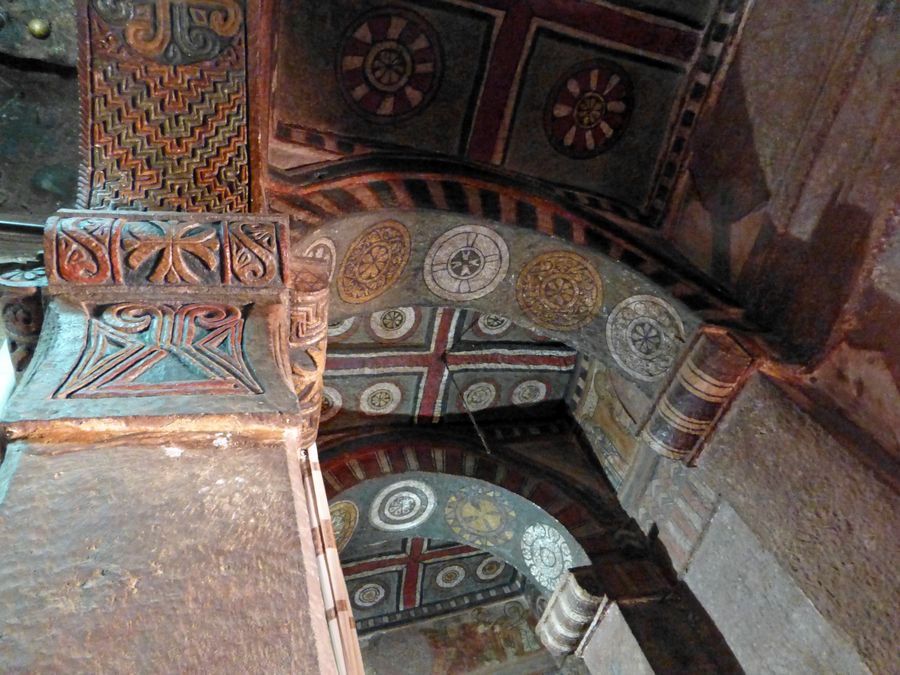 The southeastern group includes several churches (most probably the oldest in Lalibela) that were originally carved into the vaults of the caves that exist there. Deep tunnels unite a network of these underground structures, the center of which is Beth Amanuel. It is said that kings were threshed here because of the windows and columns. They are carved with imitation wood, and give the impression that they grow right out of the ground.

In my opinion, however, the most impressive church in Lalibela is the lonely and proudly solitary Temple of Beth Giorgis. It is better preserved than other buildings and strikes with its strange elegance, a symmetrical 15-meter tower in the form of a cross amidst natural rocky walls. All of its decoration, both inside and out, seems perfect, down to the smallest details. The church is dedicated to St. George, the patron saint of Ethiopia. 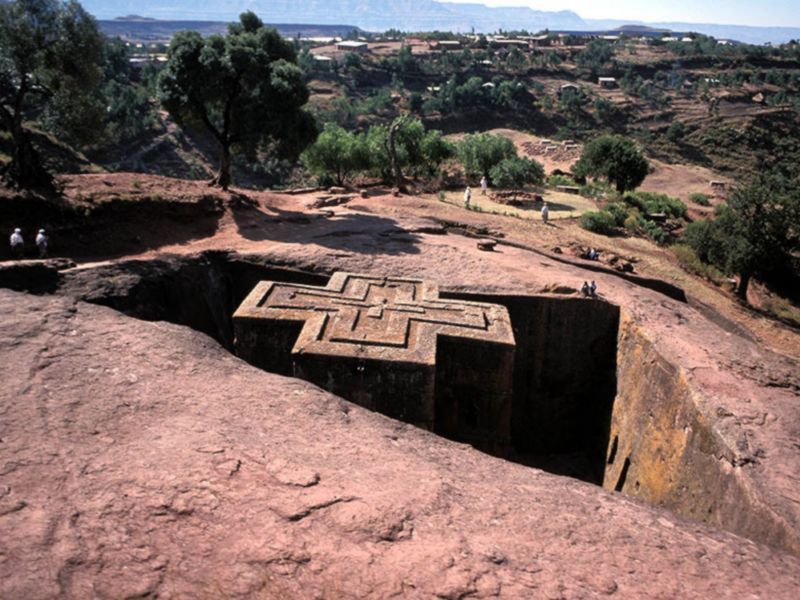 At the entrance to this temple there is a bizarre depression in the rock. According to the legend, these are the hoofprints of St. George’s horse. Standing on this spot, the horse struck a hoof, left this mark, and here King Lalibela erected the temple. The pothole really resembles a mark of a horse’s hoof. 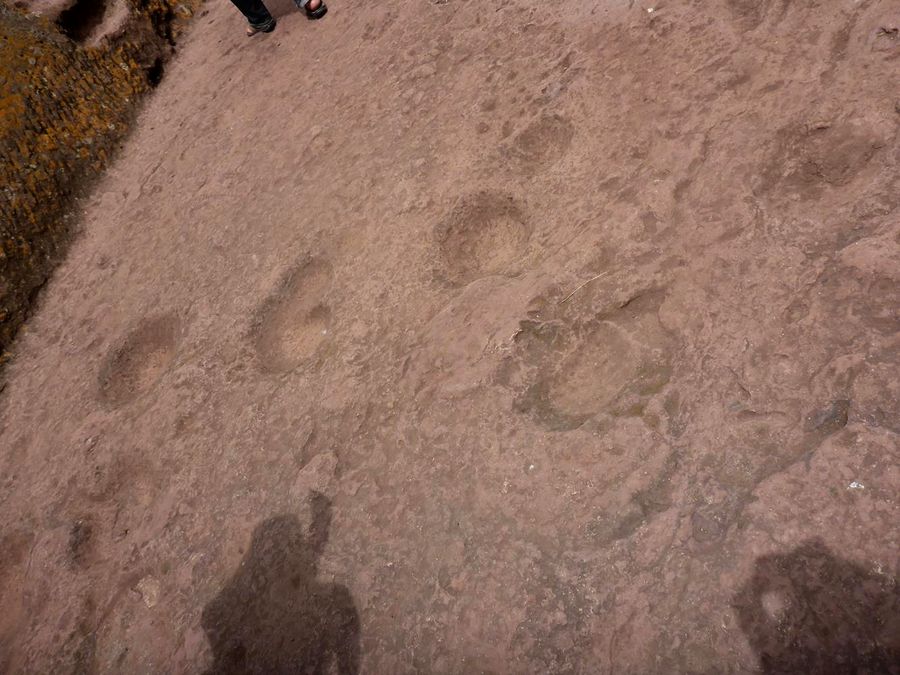 It’s mystical. But being here, you can believe any mystical stories. After all, the Ethiopian Lalibela is an amazing place that destroys all stereotypes about Christianity. Sometimes the machinations of a higher power in the creation of this architectural masterpiece may seem like the best explanation of how such impressive rocky temples came to be.