The Châteaux of the Loire. The royal luxury of the French province.

Chateaux, in whichever city or country they are situated, belong to the category of sights that interest almost everyone. After all, castles represent the most militant and at the same time romantic part of human history. In the Middle Ages it mattered to have thick reliable walls, able to withstand a long siege and protect their masters from external enemies. Owning a castle-fortress meant power, secured the rights to titles and lands. During the Renaissance and Modern times castles lost their defensive functions, becoming more like elegant urban estates with flower gardens, shady alleys and fountains.

Now imagine a country with every kind of castle imaginable – castles, hunting castles, royal residences and noble mansions. Spain, Germany, Great Britain, Austria can compete with each other by quantity of castles, but the most beautiful, legendary, mysterious, with the most amazing stories of love, revenge and betrayal are in France!

Fans of castles can spend half their lives in France trying to visit at least some of them. The task, however, is made easier by the fact that over 70 castles, belonging to kings (mostly of the Valois dynasty) and noble families, are located in a relatively small area in the Great Loire Valley. It becomes even easier when only 40 castles are ranked by scholars as major ones and only 10 are really worthy of obligatory visit as outstanding monuments of history and architecture.

Château Beauregard is less famous than the others, but boasts a unique historical portrait gallery with portraits of statesmen:

My guidebook, bought on the occasion of a visit to the Loire Valley in June 2012, lists Blois, Amboise, Chambord, Cheverny and Clos Lucé as must-sees (of those I visited). The only thing I would like to add to this list is the castle that is considered the most beautiful – Chenonceau. It is not surprising, because Chenonceau is a “ladies’ chateau” as it is called, and its most famous owner was the almighty favorite and the only love of Henry II, Diane de Poitiers, famous until the end of her life for her exceptional beauty. It was at her wish that Chenonceau acquired its unique “postcard” look thanks to the arch bridge across the river, over which the elegant galleries were built…

But there was no luck with Chenonceau on this trip. It was not fate – and that often happens in love, not only in travel. So Chenonceau awaits me at another time and under different circumstances.

But I was able to visit Chambord, Cheverny and Beauregard relatively easily in one day. It can even be done as part of a trip from Paris: arrive in the morning in Blois and leave back on the evening train.

From the SNCF station in Blois, there is a bus that runs from Chambord to Cheverny to Beauregard. You buy a ticket for the whole day and drive between the chateaux, checking the bus timetable and matching the time listed in the brochure at the stop.

There are disadvantages to traveling by bus: binding to a certain time and a certain route. But there is a plus, which I will talk about a little later.

The first castle along the route is Chambord. I decided not to leave the largest castle for last, when I have no energy left, and start immediately with the main one.

Chambord (along with Chenonceau) is the calling card of the Loire Valley and one of the most recognizable castles in France. This is evidenced at least by the fact that the cover of my guidebook has its photo.

I was unlucky: unfortunately, part of the facade of Chambord was covered by scaffolding, which somewhat spoiled the overall impression.

Chambord is classified as a Renaissance chateau, a castle that combines traditional French Gothic forms with elements of a Renaissance palace, which was intended for recreation and entertainment rather than defense. But in fact it is still a medieval castle with its strong walls and massive round towers around the central citadel, which is designed to emphasize the firmness of the power of “the lord of all the French.

All the grandeur, scale (it is the largest castle in the Loire Valley) and beauty of the Chambord Castle can only be appreciated from a distance, but at the time I could not find a good angle to capture all its wings and the endless cacophony of towers with their lead roofs and abundant decoration in one shot.

Le château de Beauregard is located in Selle in the Loire-et-Cher department, 10 km south of Blois. It was declared a monument of history and culture in 1840, and is open to tourists.

History of the Château

Since the end of the 15th century, the Château de Beauregard belonged to J. Dulce. At the end of the XV century, the Château de Beauregard belonged to Jules Dulce, master of the mint of the Duke of Orleans. Under Louis XII, it was confiscated in favor of the king for the crimes of the previous owner against the crown. His successor François I stayed in the château several times during hunting jaunts, and in 1521 he sold it to his uncle René of Savoy.

In 1545, the owner of the castle became Secretary of State for Finance in the government of Henry II J. Thiers. Under him, the Beauregard Castle gets a completely different look. The old residential building was expanded with new rooms and a central gallery connecting two separate buildings was built. The Italian painter N. del Abbate was invited to decorate the interior of the castle. By the walls of the south wing a garden with rare plants, typical for the Renaissance period, is created. 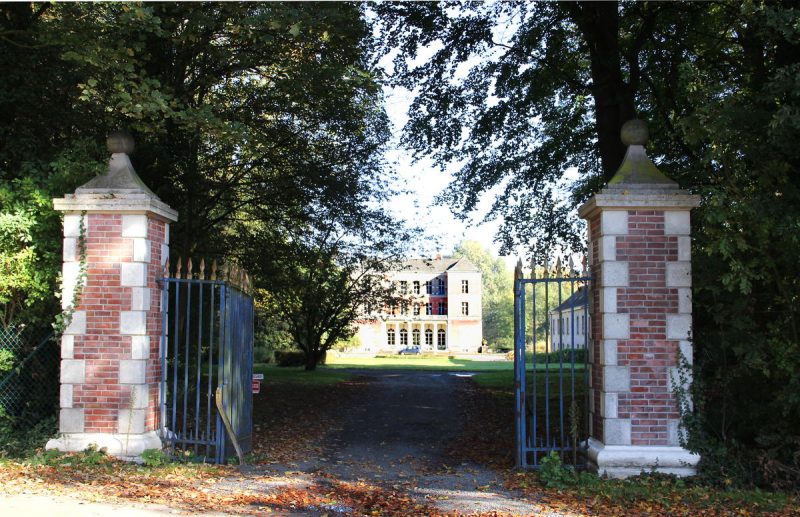 In 1617 the castle was acquired by the Royal Treasurer P.Ardier who gave it its present appearance. On his orders, the old castle was demolished and in its place two new wings were built. Under him, the collection of the famous portrait gallery begins to form. His son, the French chancellor and president of the Court of Accounts, P. Ardier, continued to renovate the castle. 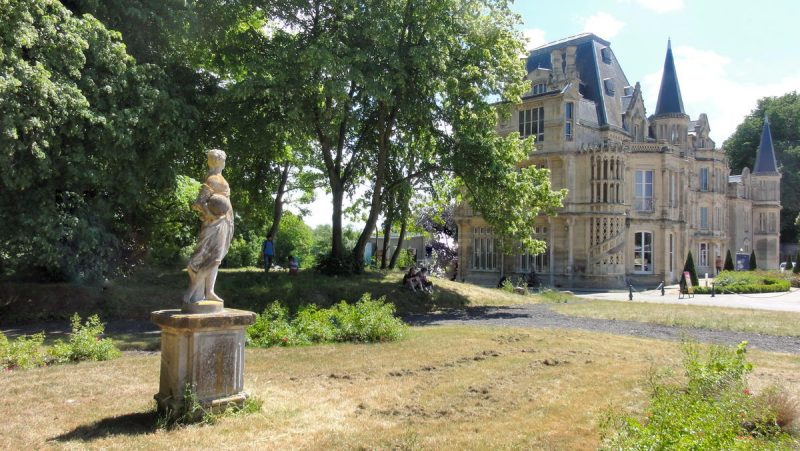 After 1816, the castle belonged for some time to the Viscount de Préval, the Duchesse de Saint-Adelgounde and members of the Duke Talleyrand’s family. In 1850, Count Cholet became its owner, under whom architect J. Morandier restored the dilapidated castle. In 1864, at the initiative of P. Mérimée, it was included in the list of historical and cultural heritage of France.

READ
Olessky Castle in Lviv region, How to get there History 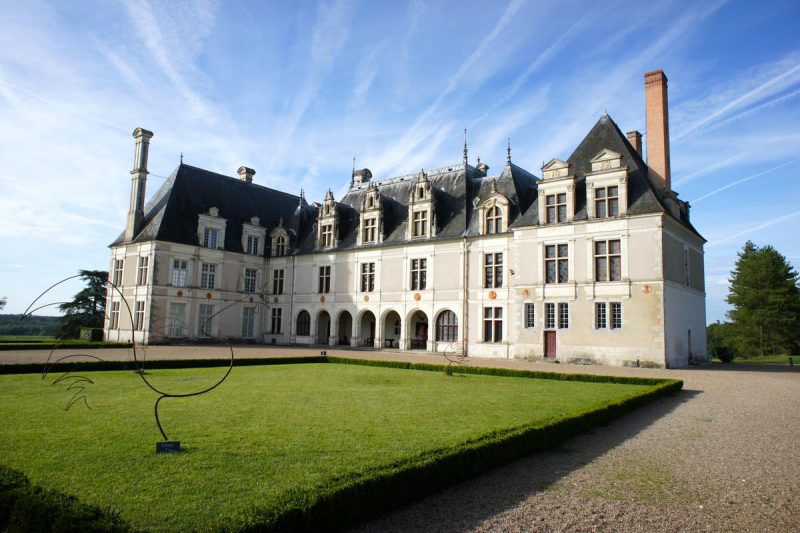 Since 1925, Château Beauregard has been privately owned by the aristocratic Gosselin family, the Comte de Chéron. Since 2010, an international exhibition and auction of portraits has been held at the château every year.

Between 1620 and 1638, P. Ardier created a portrait gallery of 327 paintings. The main criterion for selection was how much the activities of this or that politician had influenced the history of France.

Out of a number of historical figures, he chose 14 French kings, beginning with Philip IV, the Dukes of Naples. Florence and Milan, King Edward III of England, D. Talbot, the Black Prince, the Turkish Sultans Murad I, Suleiman the Magnificent, and many other rulers of Spain, Sweden, Hungary, and Austria. 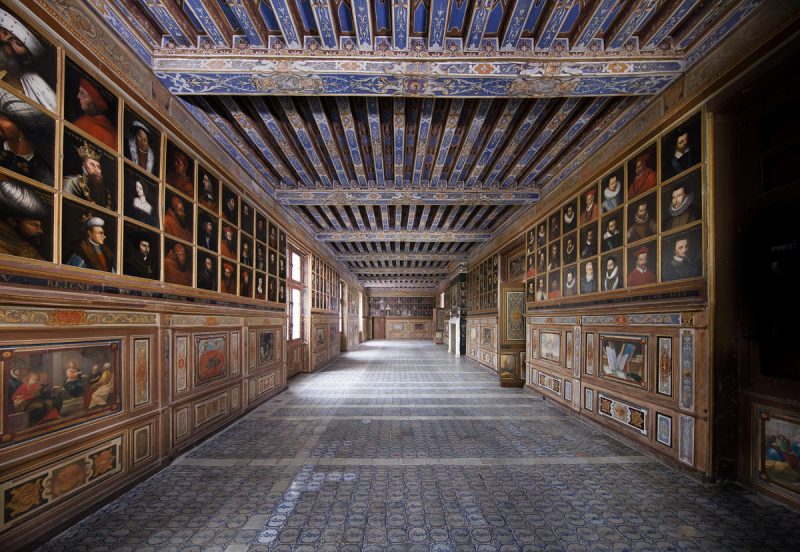 The gallery of women’s portraits includes 21 pictorial works depicting mainly rulers of England and Spain. In the French part of the collection are portraits of Isabella of Bavaria, Joan of Arc, Catherine and Maria de Medici, Anne of Austria and Mary Stuart, who could also lay claim to the French crown.

The portraits were painted by copyists of Van Dyck’s famous works. J. Fouquet, Velázquez, F. de Champagne in the art galleries of neighboring castles or based on images of church stained-glass windows and ancient coins.

The first 1500 saplings for the garden near the Château de Beauregard were given to its owner J. Thiers by King Henry II in 1551. Among them were oak, elm, beech and hazel taken from royal forests, but the owner of the castle was known among his contemporaries as a lover of rare exotic plants.

In the Renaissance period it was a geometrically regular garden with a regular layout of alleys, large wooden galleries, light arbours and pavilions and a central fountain. In the XVII-XVIII centuries. the garden was given utilitarian value, so most of its area was occupied by cherry. plum, almond, walnut and vineyards.

READ
Berry Pomeroy Castle in Devon, its history and description 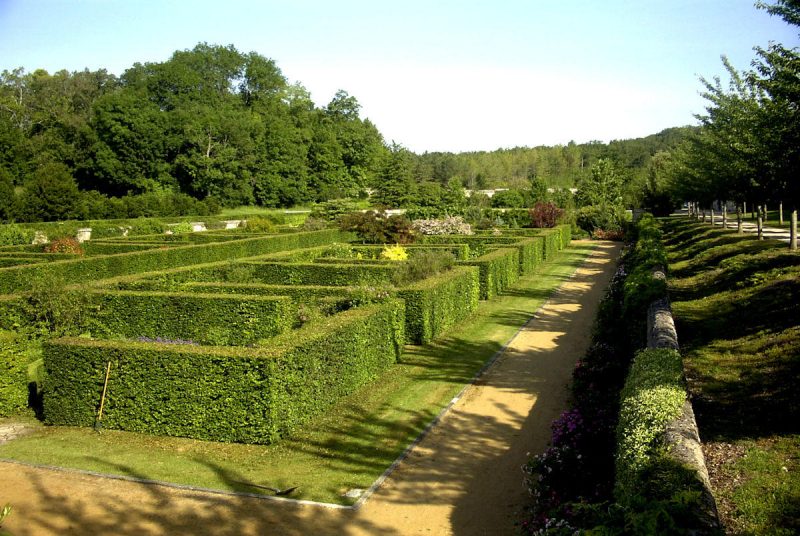 At the end of the XVIII-beginning of the XIX century. fashionable English school of landscape architecture leads to the disappearance of the old garden in the French style. At this time, the botanical collection of the garden is enriched with various species of cedars, magnolias and tulip trees.

In 1992 the garden was reconstructed according to the project of the landscape designer J. Clement. His concept was to create a garden combining the heritage of the past and modernity. It consists of 12 mini-gardens in which plants are grouped by similarity in shades of foliage and flowers. The predominant color is symbolically associated with some historical event or section of the portrait gallery. For example, plants with red flowers predominate in the garden of the Night of Bartholomew.