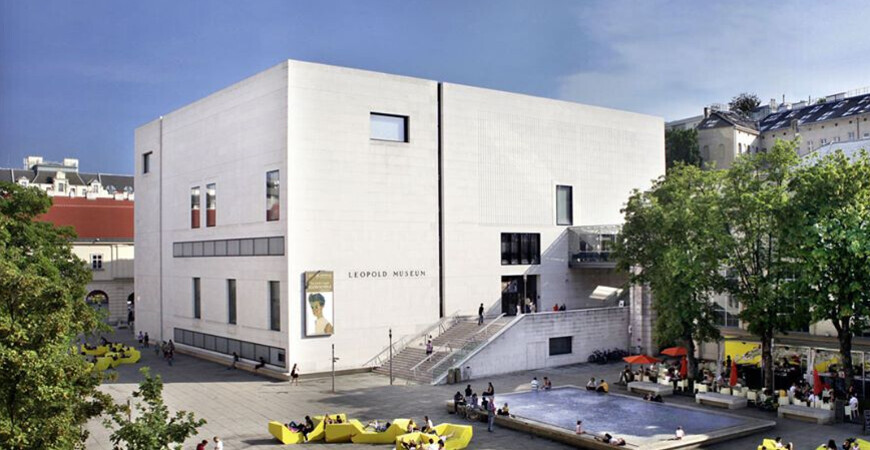 Leopold Museum is an art museum of contemporary art located in the Museum Quarter in the Austrian capital city of Vienna. It was founded in 2001 by a married couple: Rudolf Leopold and his wife Elisabeth Leopold. The white shell building is immediately visible and is one of the highlights of the MuseumsQuartier and the most visited place in the area. During the year, the Leopold Museum receives about 400,000 visitors.

The Leopold Museum building is a white cuboid in shape and sits next to another, black cuboid, the Ludwig Foundation Museum of Contemporary Art. The two new buildings contrast with the historic buildings of the former stables of the imperial court, which share the courtyard. The rectangular Leopold Museum building was designed by the architectural firm Ortner & Ortner. Lorides and Manfred Ortner, brothers, are the designers of the entire Museum Quarter in Vienna, and it is one of the largest cultural centers in Europe.

The museum building is 46 meters long and 40 meters wide, and rises to a height of 24 meters. The total area of the museum is 12 600 square meters. Entrance to the building is via a staircase 10 meters wide, which is equipped with barrier-free access. The floors of the exhibition halls are covered with oak parquet, decorative metal parts are made of patinated brass. From the top floor of the museum visitors have a wonderful panoramic view of the Old Town of the Austrian capital.

The Leopold Museum houses one of the world’s most important collections of Austrian visual art from the second half of the 19th century and the Modern age, with around 6,000 works of art. The collection of the married couple Rudolf and Elisabeth Leopold, which was built up over five decades, forms the basis of the museum’s collection. The national government, with the support of the Austrian National Bank, bought some 5,000 works of art from the owners, and Rudolf Leopold became the museum’s director for life.

Their extraordinary passion for art allowed them to collect and preserve works by artists such as Egon Schiele and Gustav Klimt, which until the 1960s were considered taboo, so they could be acquired for relatively modest sums. The core of the collection consists of Austrian works of art from the first half of the 20th century.

The Leopold Museum has the world’s largest collection of paintings by Egon Schiele, with over 220 works, which gives the most complete picture of the work of the great artist and the most important representative of Austrian expressionism. Also on display are works by Gustav Klimt, another pioneer of modern painting – one of the founders of the Art Nouveau movement in Austrian painting.

The Leopold Museum’s collection includes major works by Richard Gerstl, Oskar Kokoschka and Alfred Kubin, as well as works by 19th century artists such as Ferdinand Georg Waldmüller, August von Pettenkofen, Emil Jacob Schindler and Anton Romako. In addition to preserving the collection, presenting it publicly, and continuing scientific reevaluations, a key objective of the Leopold Museum today is to expand the art collection through new acquisitions.

In accordance with the holistic concept of art, furniture and decorative objects from the Wiener Werkstätte, founded by the architect Josef Hofmann and the painter Koloman Moser, are presented here. One collection is devoted to decorative arts from Africa, Oceania and East Asia.

The museum has exhibitions devoted to the history of modern art and reveals interesting facts about many artists working in the modernist style and other new trends. Visitors can learn about the birth of modernism in Vienna, get acquainted with German expressionism and learn about the art of the future.

The Leopold Museum is open every day except Tuesday from 10:00 to 18:00. The box office closes half an hour before closing time. Ticket prices:

Tickets can be purchased at the museum’s official website or through the links below:

The museum has a cafe, Leopold, which offers guests a varied menu with Asian and other international cuisine, complemented by local classics. From sushi, kebabs, pulkogi and Vienna schnitzel to warm chocolate muffins, there is something for every taste. Café hours are Monday through Friday, 9:30 a.m. to 1 a.m. Saturdays, Sundays and holidays, 9:30 to 12:00. A special guest package costs €25 and includes visits to the museum, all current exhibitions, use of the audio guide and breakfast in the café.

The Museumsquartier station on Vienna’s 2nd subway line is just 350 meters from the Leopold Museum. It is about 5 minutes walking distance.

There are several ground public transport stops nearby. The nearest ones are:

It is more convenient to call a cab in Vienna with the help of mobile applications of such operators as Uber, Taxi 40100, Free now (mytaxi). If you are going to the museum by car, we recommend you to use the parking lot, located right in front of the main entrance to the MuseumsQuartier. It is open 24 hours a day.

The Leopold Museum is a modernist museum with the largest collection of Schiele and Klimt paintings. The museum is equipped with the latest technology. Stained-glass windows offer an excellent view of Maria Theresia Square and the Museum Quarter. 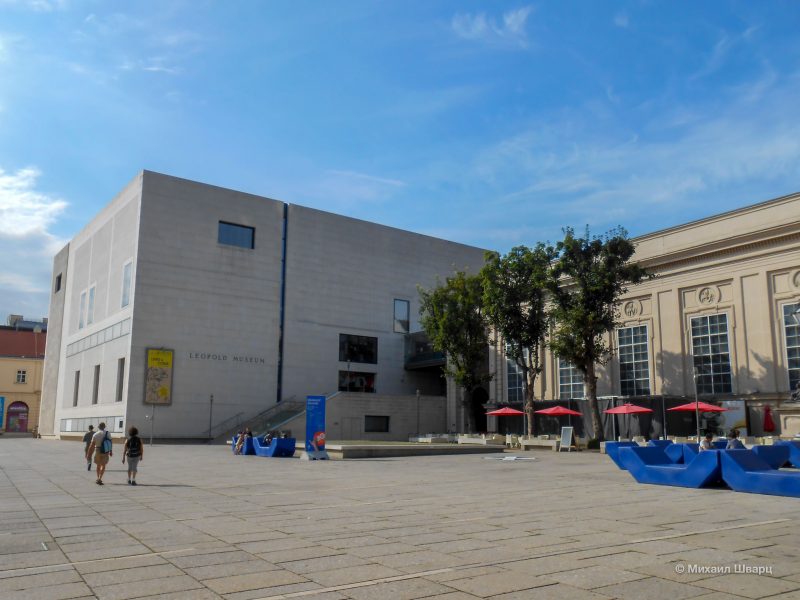 Masterpieces in the heart of Vienna

The Leopold Museum is the most haunted art treasure in Vienna’s MuseumsQuartier. The building at Museumsplatz 1, built in the shape of an elegant white cube, presents the public with thousands of masterpieces.

The Leopold Museum collection is based on a private collection of paintings gathered over many years by the Leopold spouses Elisabeth and Rudolf.

Rudolf Leopold was a successful ophthalmologist with his own practice. In the history of Austria he went down in history as a passionate collector and an art lover. His private collection of paintings began with works by old masters. Subsequently, he and his wife switched to modern painting, collecting the works of modernists, expressionists, the works of art in the Secession style. The couple left the practice of medicine and since then has been engaged only in collecting paintings.

The Austrian authorities have bought from the family Leopold five thousand works of art. In 1994, was adopted a special law “Lex Leopold”, which proclaimed this collection of property of the Austrian Republic. In 2001, the Leopold Museum was opened. Professor Rudolf Leopold was appointed its permanent director (since his death in 2010 the permanent exhibition of the museum is managed by his son).

White Cube in the Museum Quarter 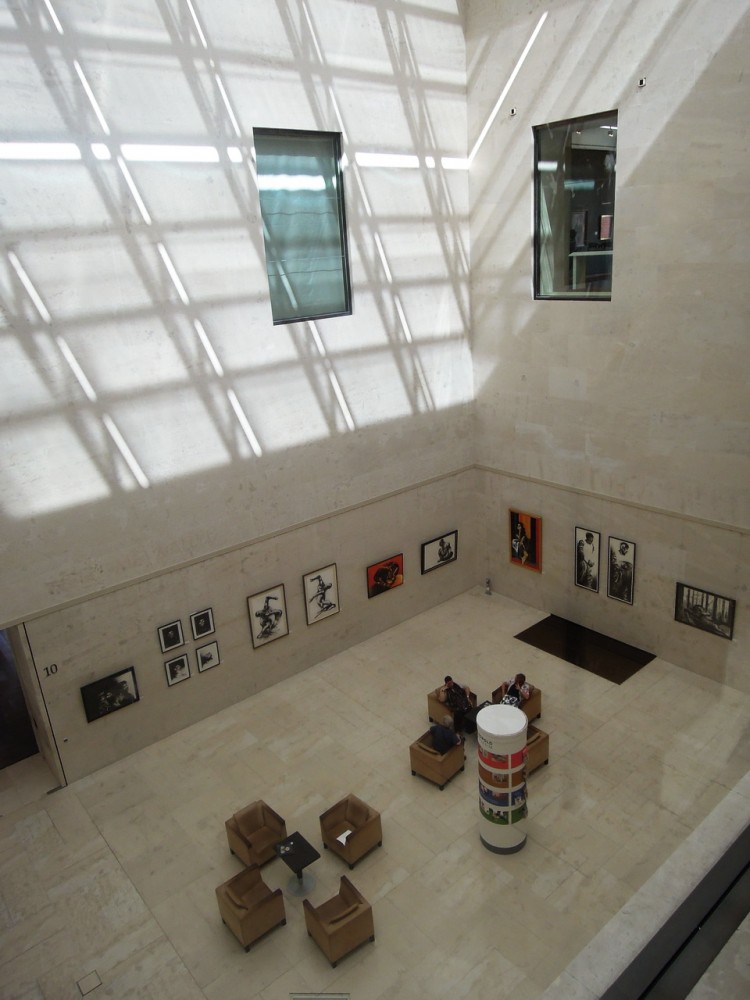 The imposing museum building, lined with white shell rock, was built by the renowned architectural firm Ortner & Ortner. The building’s laconic exterior contrasts with its quirky layout. Inside the building – extravagant interiors, oak parquet, abundance of brass details covered with artificial patina. The panoramic windows of the museum offer a unique view of Maria Theresa Square and the Hofburg.

The Grand Atrium, filled with light, is the starting point for a visit to the museum. The exhibition space of the three upper floors is concentrated around the upper and lower atriums. There is no natural light on the lower floor – graphic works are on display there. 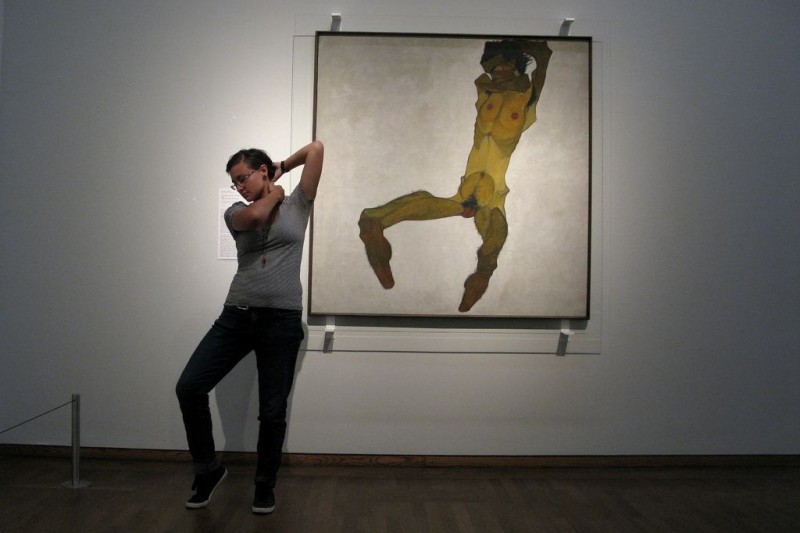 The main asset of the Leopold Museum is an exhibition of paintings by Egon Schiele. Rudolf gathered the world’s largest collection of works by the outstanding representative of Austrian expressionism: “The Setting Sun”, “Houses, or City on an Island”, “Cardinal and Nun”, “Dead City”, “Self-Portrait with Flowers-Flowers”, “The Lying Woman”. All valuable canvases of important creative stages of the artist.

The Leopold Museum also provides original documents and interesting information about the life of the artist and his creative development from Jugendstil to Expressionism. 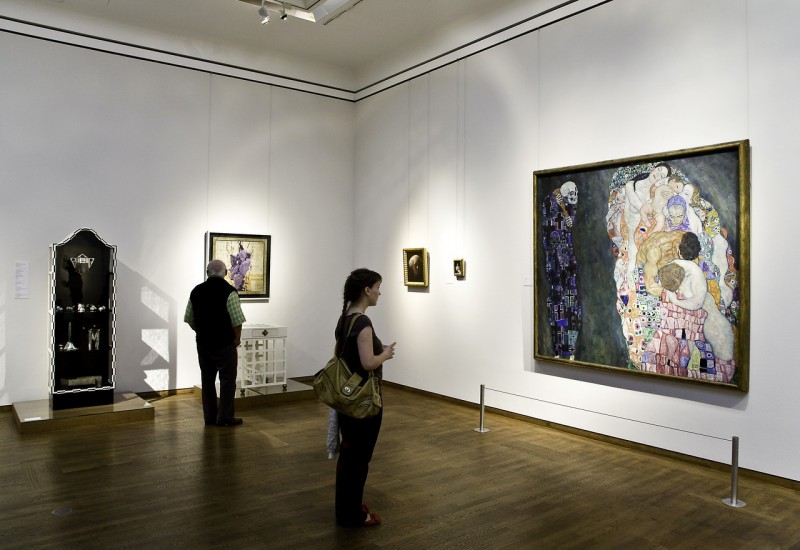 The exhibition presents some of modernist Gustav Klimt’s most significant canvases: “A Quiet Pond” or “Attersee” and the monumental canvas “Death and Life”. The artist was a founder of the Vienna Secession. 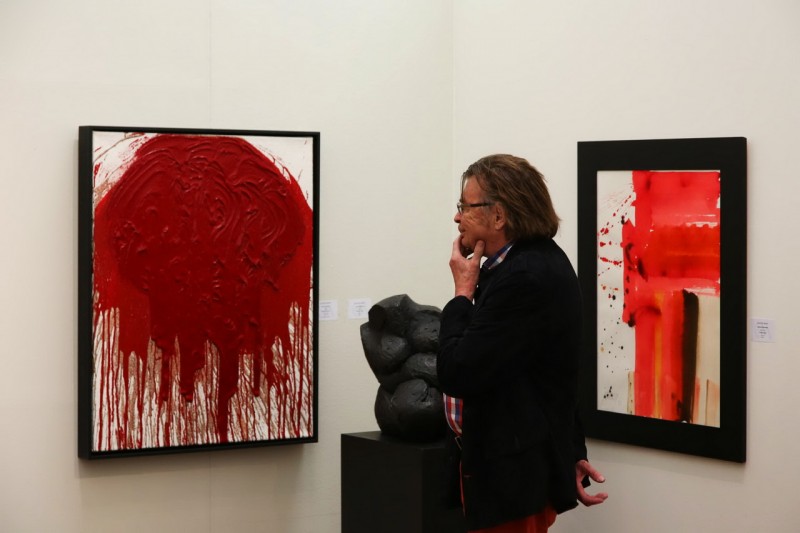 In the halls of the museum, photo by Lorenz Seidler

Paintings by Kokoschka and Moser, Waldmüller, Gerstl, Romako and other prominent 20th century artists can also be seen here.

In addition to art paintings, the Leopold Museum also contains unique art objects from the Vienna Art Workshop, works by Hofmann, Moser and other design masters.

In addition to the main exhibition, the museum constantly hosts special exhibitions. 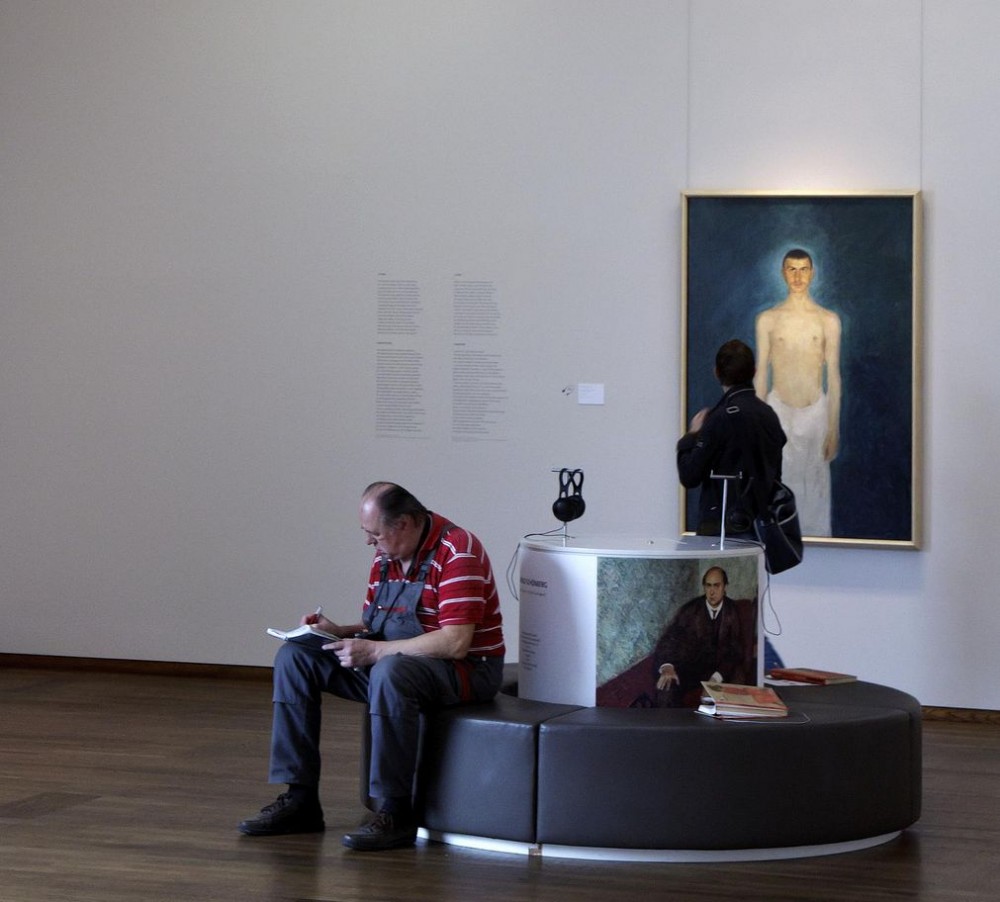 The museum has a Leopold Museum Shop. Visitors are offered a collection of postcards and catalogs, art books, prints, silk scarves and jewelry based on works by contemporary artists. 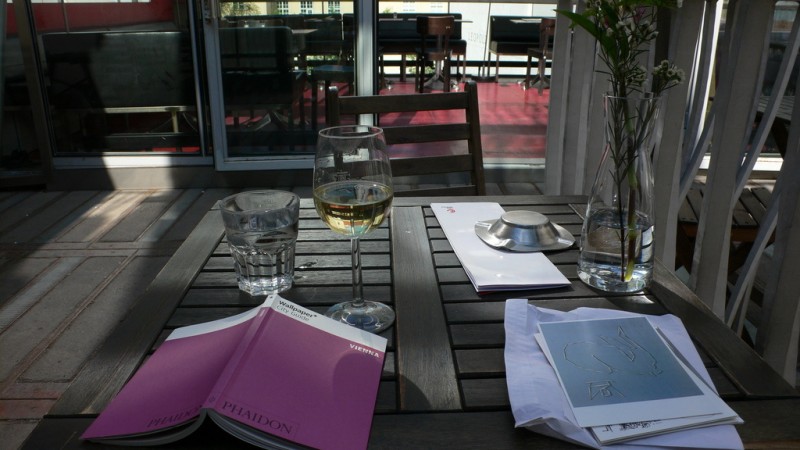 The conceptual café Leopold was opened in a museum building. It is a favorite hangout of the Viennese hangout. Indulge in apple strudel and mélange coffee on a warm summer day on the museum’s rooftop terrace or in the glassed-in conservatory if it’s cooler.

Ticket prices can be found on the Leopold Museum website. It is possible to get an audio guide in German, English, French and Italian.

Tickets can be purchased online:

Take the U2 to Museumsquartier, the U3 to the Volkstheater or the streetcar 1, 2, D to the stop Dr.-Karl-Renner-Ring.