Lerdahl tunnel – the longest road tunnel in the world

The Lerdahl Tunnel is currently the longest vehicular tunnel on the planet.

We focus our attention on the word “automobile”, as there are longer tunnels, but they are used by railway transport. This is why we do not include them.

In Norway it is almost impossible to travel between towns without crossing the mountains. Those who have traveled in Norway know how beautiful the country is. Unfortunately, its complicated geography, abundance of mountains, glaciers and maze-like fjords sometimes create conditions in which some Norwegian communities remain cut off from each other and from civilization during the winter. In order to build communication routes that do not depend on weather and seasonal conditions, it is often necessary to create them right through the rocks, that is, to build tunnels. 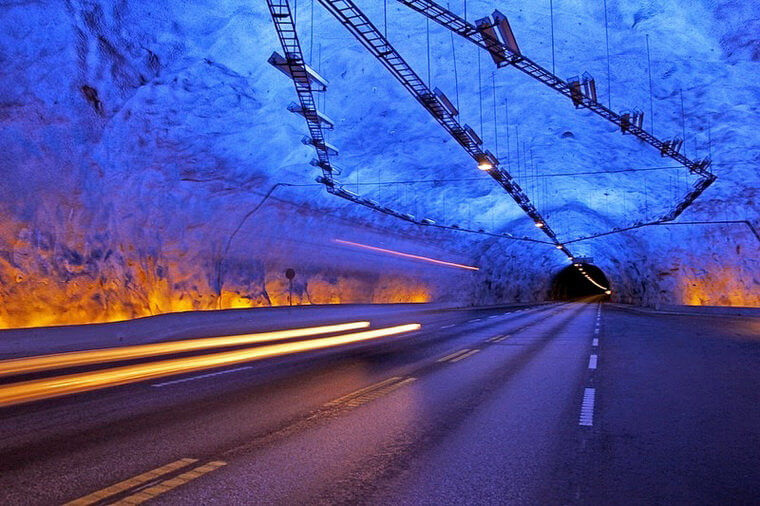 In general mankind is trying to make the distances between points on the globe as easy and short as possible. The legendary Panama Canal is one such logical project.

The Lerdahl Tunnel is one of the roads linking remote areas of the country.

Where is the Lerdahl Tunnel

The tunnel connects the municipalities of Lerdal and Eurlann in the Sogn og Fjordane region of southwestern Norway and is a section of the E16 road between Oslo (the state capital) and Bergen, the country’s second largest city. 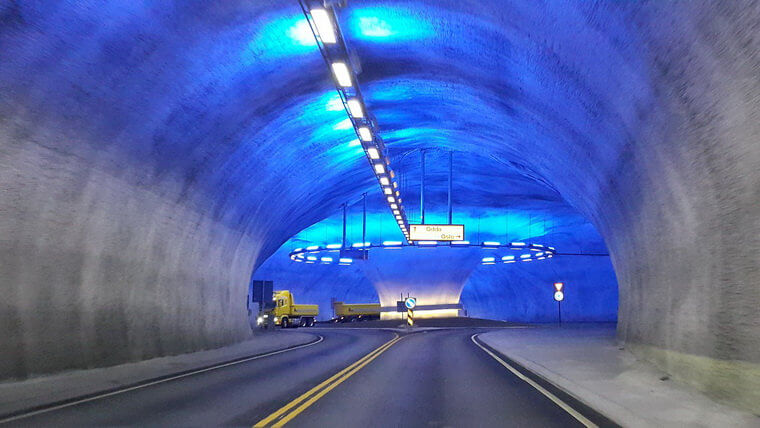 The Lerdahl Tunnel in numbers

Learn about the Øresund Tunnel Bridge between Denmark and Sweden. If the wording “Bridge Tunnel” confused you, be sure to read the article at the link above and find out why that is the most correct definition.

Safety of the Lerdahl Tunnel

One of the main challenges facing the engineers was keeping drivers alert during the 20-minute monotonous drive with the same scenery outside the window. This is really important for drivers, who can lose concentration, leading to an accident. 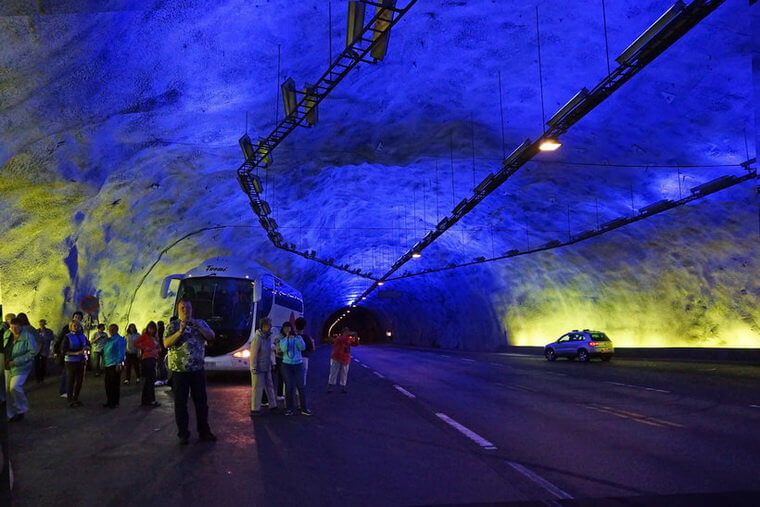 To this end, the Lerdahl Tunnel has small bends between straight sections of road, and every 6 km of the way you can find large caves. There are three such caves in total. They are designed to break up the monotony of the road, to give the driver an opportunity to rest or turn around if necessary. For people with claustrophobia such caves will be a kind of an outlet. The caves divide the entire tunnel into 4 roughly equal sections. In addition to the three large caves, there are emergency niches every 500 meters.

Lighting and a rumble strip

Special attention was paid to lighting. The main tunnel (the areas between the caves) is lit in white to simulate daylight. In the caves there is blue lighting with yellow lights around the edges to give the impression of sunrise. 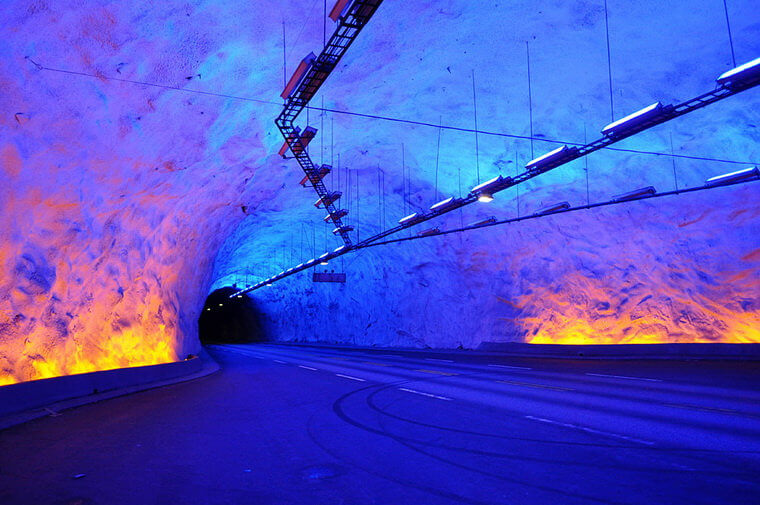 The lighting of the Lardale Tunnel

In the center, a “rumble strip” is present between the traffic lanes. This is a special grooved surface, which produces increased noise from the wheels when driving over it. Thus, even if the driver loses vigilance, he will immediately concentrate on the road. 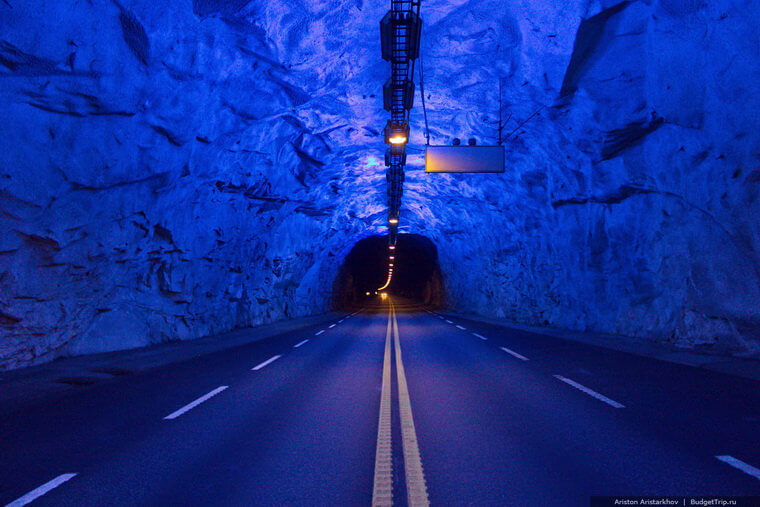 Pay attention to the markings in the center. It has a grooved surface. This is the rumble or noise striping.

Be sure to read about the Yungas Death Road in Bolivia. It is not a tunnel, but it is one of the most dangerous tracks in the world.

The air purification system in the Lerdal Tunnel

The tunnel does not have many ventilation outlets. Therefore, the second major design challenge was the air supply and purification system. The Lerdahl Tunnel was the first tunnel to be equipped with its own air cleaning and ventilation system.

Large fans draw in air from both entrances and contaminated air is discharged through one single ventilation outlet. This outlet and the cleaning unit itself are located in a separate 100-meter-long cave, 9.5 kilometers from the southern end of the tunnel on the Eurlann side of the municipality. Plus there are electrostatic and carbon filters that, in addition to removing dust, purify the air from nitrogen dioxide.

There are no emergency exits in the tunnel. In case of emergency or fire, there are a number of precautions. There are emergency telephones marked “SOS” every 250 meters. They allow you to quickly contact the police, fire or medical services. Fire extinguishers are placed every 125 meters. And if an emergency phone is used or a fire extinguisher is removed, stop lights and “turn” and “exit” signs light up throughout the tunnel, and “tunnel closed” signs turn on at both entrances-exits. 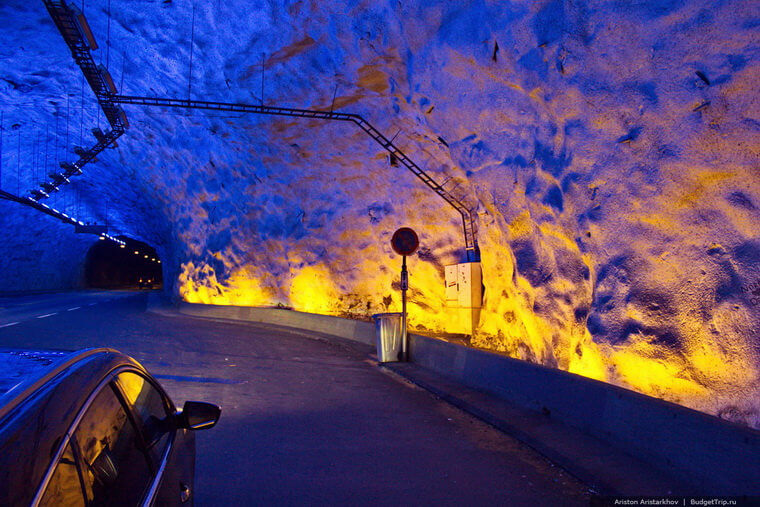 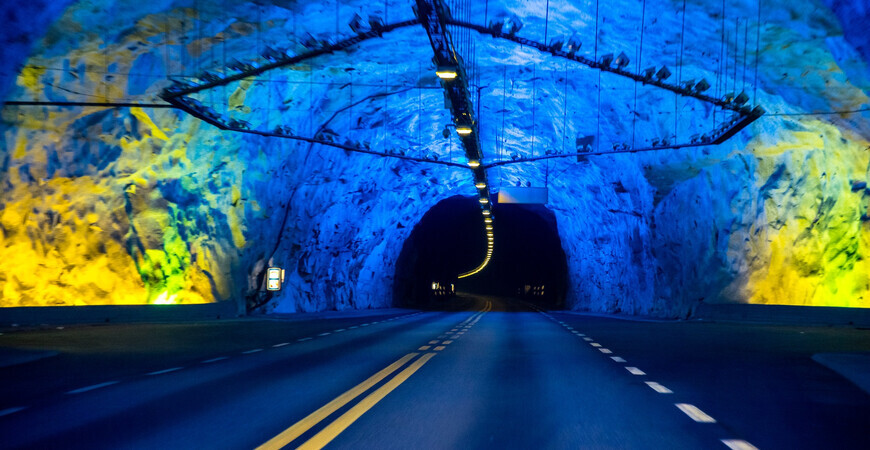 The Laerdal Tunnel provides year-round traffic between Bergen and Oslo. A section of the E16 highway passes through a rock in the Sogn og Fjordane fjell between Eørland and Laerdal, and the distance from the entrance to the exit is 24.51 kilometers. The Lerdahl Tunnel is currently the world “record holder” in terms of length, having “overtaken” Japan’s second longest tunnel, the Yamate Tunnel, by 6.31 kilometers.

Construction of the grandiose construction began in 1995 and ended in 2000. The road has two lanes for traffic in both directions, with the possibility of overtaking and U-turns. The project cost the Norwegian budget 113.1 million American dollars and became one of the ten most expensive in the world. Before the Lerdahl Tunnel, the route from Bergen to Oslo included a ferry connection or winding mountain roads that were partially closed during the winter. From June to October 15, drivers can also travel from Eurlann to Laeredal and back via Norway’s Aurlandsfjellet (Snow Road), which runs over the Eurlann Fjord.

The tunnel is built in a rock 1600 meters high. It is 9 meters wide and 5-7.5 meters high. During the five years of construction more than 2.5 million kilograms of explosives were used and more than 2.5 million cubic meters of rock was removed. The vaults were reliably reinforced with 200 thousand rock bolts up to 2.5-5 meters long and 45 thousand cubic meters of reinforced shotcrete.

It takes an average of 20 minutes to drive from the entrance to the exit. If desired, it is possible to drive back: 15 turning points are provided for turns. Despite the presence of curves, the distance for the direct view from any point is not less than 1 kilometer. About 1000 vehicles pass through the tunnel per day. At the busiest hours the traffic was up to 400 cars per hour.

The Lerdahl Tunnel project was developed jointly with the SINTEF research company (the Industrial and Technological Research Association). Specialists wanted to ensure maximum traffic safety and at the same time make the long stretch of road less monotonous.

During the 20-minute trip drivers should be in a “tone”, which contributes to smooth curves after small straight sections and changing colors of the backlighting. In some sections there are relief markings between the lanes, when the driver hits them he feels a slight jolt and hears the noise of the wheels. These methods are designed to reduce accidents due to weakened concentration.

The tunnel is conditionally divided into 4 equal sections with the help of 3 zones for stops and separation of large-sized vehicles, which are located every 6 kilometers. In these areas there are wide rock pockets where you can park and get out of the car. The main sections of the track are equipped with white “daylight” lighting, while the extended sections are illuminated with blue and yellow, imitating the colors of the dawn sky.

READ
The Atlantic Road and the bridge to nowhere. Norway. Description, photos.

The tunnel uses a unique longitudinal ventilation system. A cleaning station with electrostatic and charcoal filters is located 10 kilometers from the entrance (on the Eurland side) and an air exhaust shaft is 18 kilometers away. The station has a multi-stage cleaning system for particulate matter, nitrogen dioxide, unburned fuel residues and other pollutants. The system switches on automatically when the concentration of impurities exceeds the established norm.

On the tunnel vaults there are LED traffic signs “stop”, “turn” and “exit”, which light up in case of emergency. On both sides there are fire extinguishers (every 125 meters) and SOS telephones (every 250 meters) to call the police, firemen and ambulance. If necessary, you can use a cell phone, as there are cell phone antennas in the tunnel.

For the separation of buses and trucks there are 15 turning points, at the entrance of which the “turn” and “exit” signs are lit. In case of breakdown the driver will be able to stop in one of the special pockets, set up every 500 meters. The speed limits are monitored by CCTV cameras, installed inside the tunnel and at the entrances.

The Lerdahl Tunnel is part of the European road E16, which runs through Norway (Bergen – Oslo), Sweden and the UK. The nearest settlements are the towns of Voss, Laerdal, Eurland, Flom and Borgund. The passage is open 24 hours a day and is free.