The City Palace of the Princely Family of Lichtenstein was the first important high baroque building in Vienna. Today it is home to an exhibition of Biedermeier and Classicist works of art from the private Lichtenstein collection. 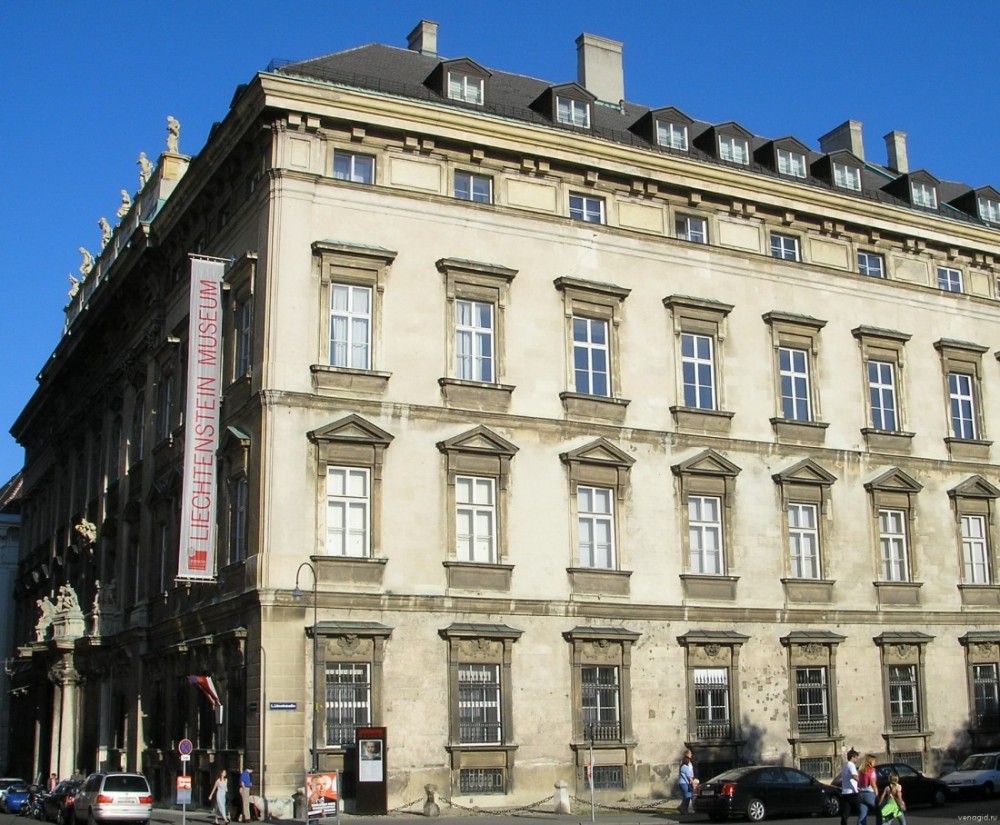 Built in 1705, the Stadtpalais Liechtenstein was Vienna’s first major High Baroque building. Construction of the palace began in 1691 for Count Dominik Andreas von Kaunitz. After three years of construction, the building was bought by Johann Adam I, Duke of Liechtenstein.

The Lichtensteins purchased the building to make it their family town residence. Designed by Italian architect Domenico Martinelli, the palace was to be a jewel in the baroque style, new at the time.

The architecture of the City Palace

A striking example of Baroque architecture was the main façade of the palace, facing Bankgasse Street. Its monumental portal was decorated with slender Ionic columns that supported a massive cornice with a balustrade. Rectangular window openings were decorated with characteristic french arches and cornices.

Internal finishing of the palace 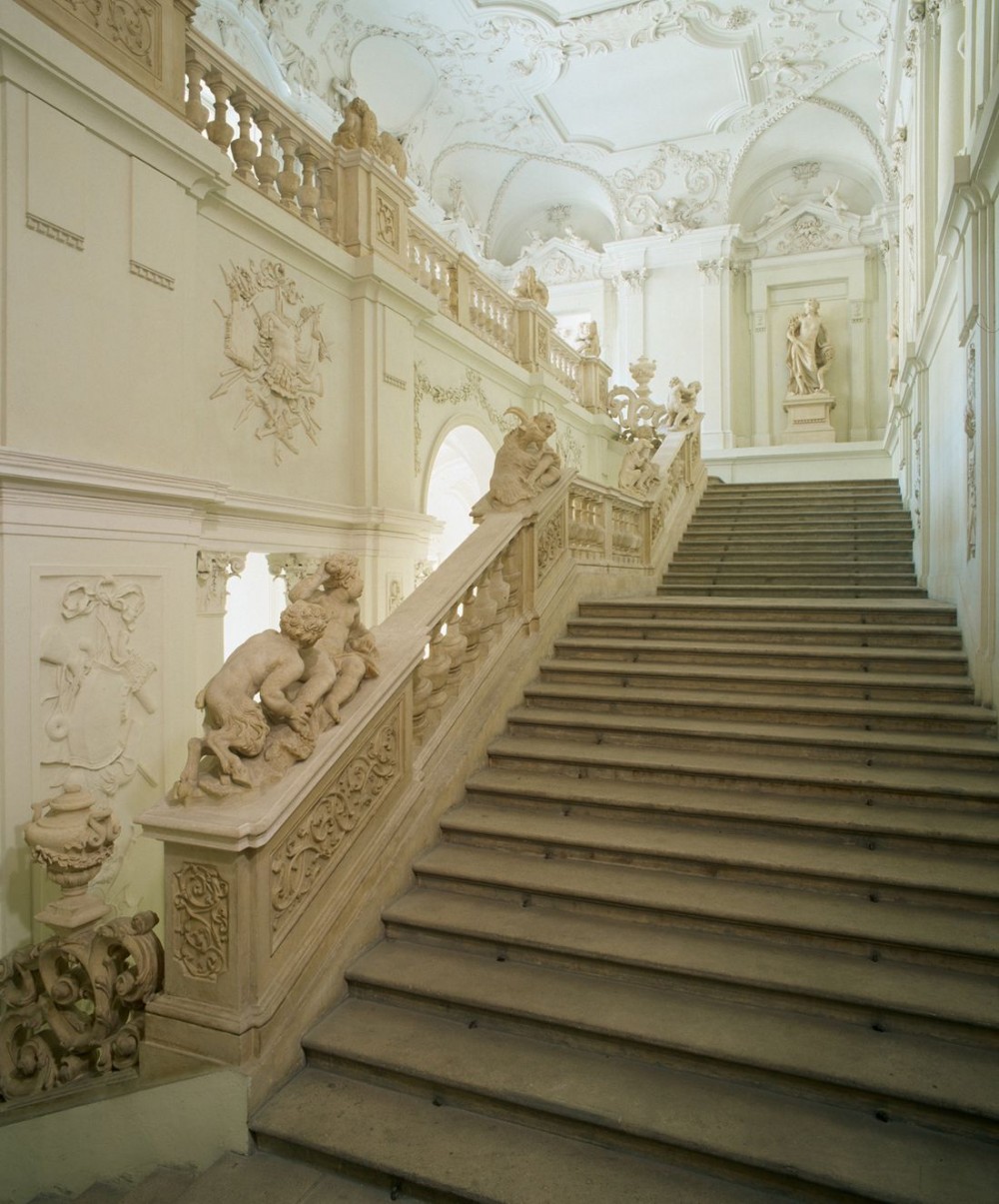 The attic was sculpted by Giovanni Giuliani, who also did the interior design. Plastering work was carried out by the famous Italian master Santino Bussi. The main staircase was built in 1699 by Viennese craftsman Michael Hall; the stone carving on it was done by Wolfgang Steinbock. On the second floor of the palace till 1806 there was an art gallery belonging to the princely family.

Decorative design of the Liechtenstein Palace

The palace has been altered several times. In the mid-19th century, Prince Alois II of Liechtenstein, an Englishman, wanted to reconstruct the building in the Neo-Roco and Neo-Gothic style. He invited the London specialist Peter Hubert Devigny. The architect worked on the reconstruction for twelve years. The result of his work were magnificent ceremonial halls. The ballroom of the Liechtenstein Palace was decorated with moving mirrors, stucco decorations, and a generous covering of gold leaf. The palace parquetry and furniture were created by Karl Leistler and Michael Thonet. 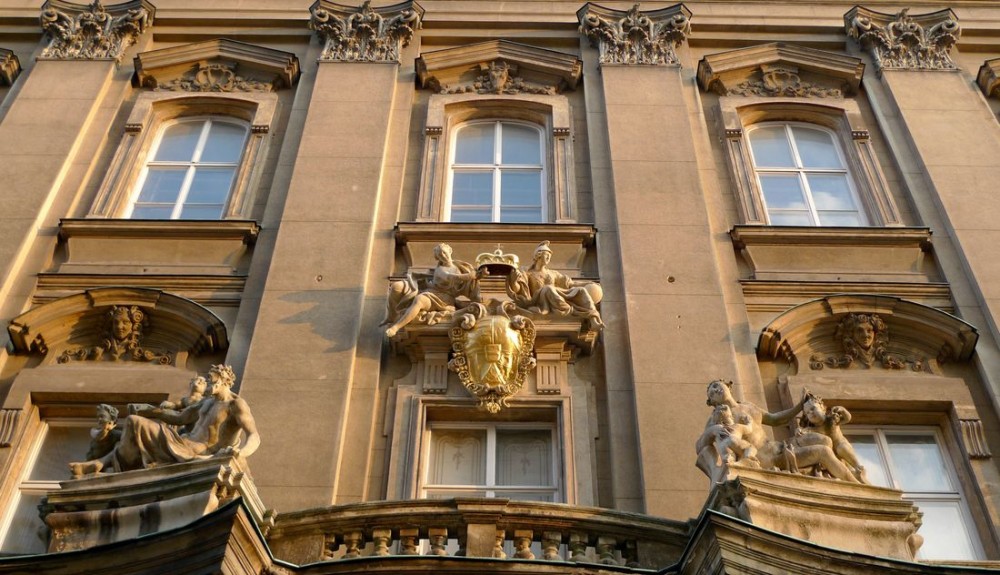 Front of the palace, photo by Thomas Ledl

Technical innovations of the palace

Apart from the decorative design, there were also quite a few technical improvements. An elevator, an intercom system with post offices and an air heating system were installed in the palace. In the ballroom a double lighting system was used, which produced a unique visual effect. In the middle of one of the saloons a swimming pool with a fountain was arranged.

Reconstruction of the City Palace 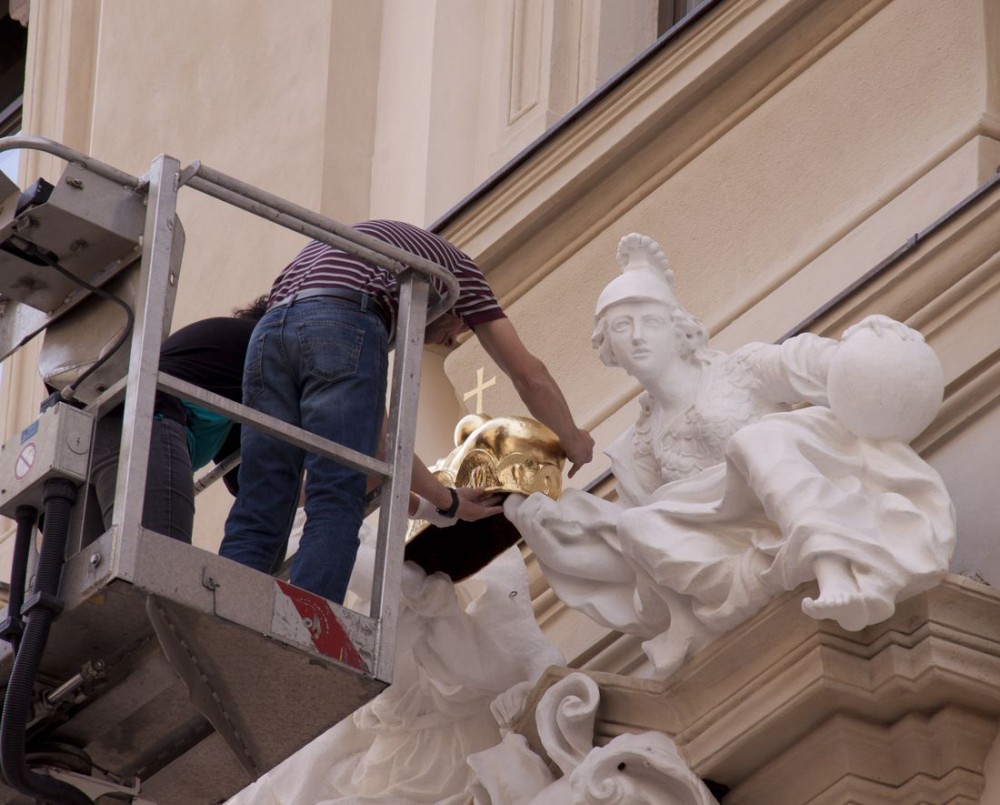 Restoration of the City Palace

The palace escaped destruction during the Second World War, but it was seriously damaged by bombs falling nearby. The first reconstruction was not possible until the mid-1970s. The building required several stages of restoration.

In the spring of 2013, the palace was completely renovated – the reconstruction was led by architect Manfred Wedorn. The gilding and silk upholstery on the walls, the original furnishings, and the famous grand staircase were restored. Candles and candelabras were replaced with LED lanterns. 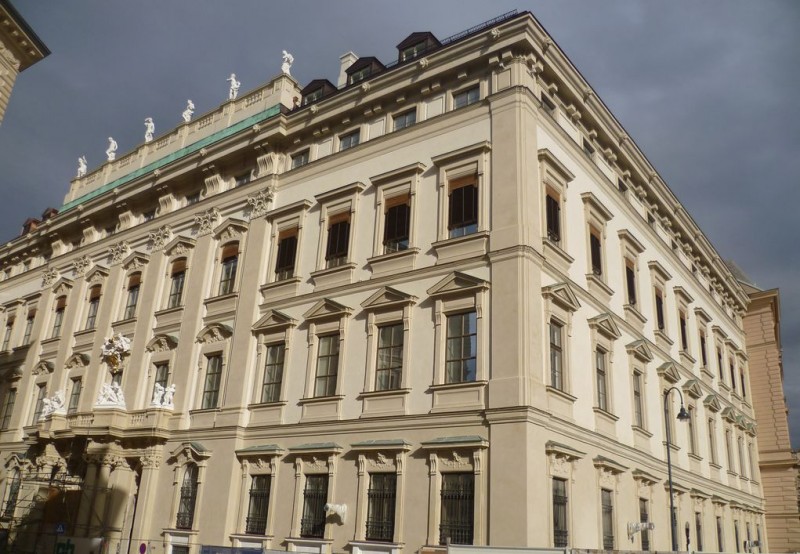 An exhibition of Biedermeier and Classicist works from the private collection of the Lichtenstein family can be seen within the restored palace. In the building you can see the Tonnet furniture, vases, engravings, tableware and decorative dishes of the Imperial Porcelain Manufactory.

The palace offers guided tours – including the famous “Night of Museums”. The front rooms of the Stadtpalais are rented out for festive events. Another Liechtenstein palace, the Garden Palace, is located on Fürstengasse. 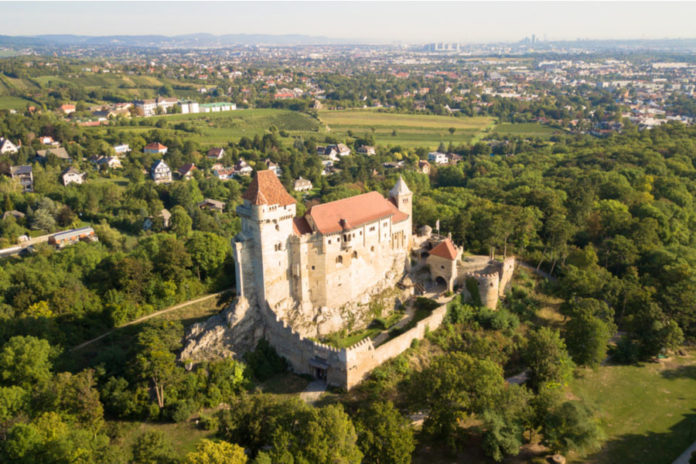 Austria’s Castle Liechtenstein (Burg Liechtenstein), on the southern edge of the Vienna Woods, is a popular landmark on the outskirts of Vienna.

For a long time it belonged to the Lichtenstein dynasty: it is believed that the name of the ruling family came from the castle’s name.

The castle was built in the 12th century. It was founded by the first representative of the princely dynasty – Hugo von Liechtenstein (Hugos von Liechtenstein). The Lichtenstein family used the castle as a temporary residence from 1130 to 1295.

READ
Where is the Grand Catherine Palace

The location was not a coincidence – the fortified structure was situated along the line of several thermal springs on the territory of the present-day states of Austria and Bohemia.

Since the 14th century the castle was passed from one noble family to another. At various times it was owned by King Matthias Corvinus, the House of Freisleben, the Khevenhiller dynasty and the Aichelberg dynasty.

In the 16th and 17th centuries the fortress was attacked by the Ottomans and was almost completely destroyed.

After Johann I Josef – Prince of Liechtenstein – bought the castle (or rather its ruins) in 1807, it was decided to rebuild the original castle.

The Second World War also did not pass without leaving a trace for the building. The damages caused by the war were repaired in the middle of the 20th century by volunteers of the town of Maria Enzersdorf.

Between 1975 and 2007 the castle was leased to the town authorities. Today belongs to the Principality of Liechtenstein.

Nowadays the castle is open to the public – anyone can walk around the halls and towers, but only with a guide.

The architecture of Liechtenstein Castle

The structure has a rather unusual shape: built on a rocky hill, it looks elongated. This is not surprising, because its length reaches about 50 meters with a width of only about 15 meters. 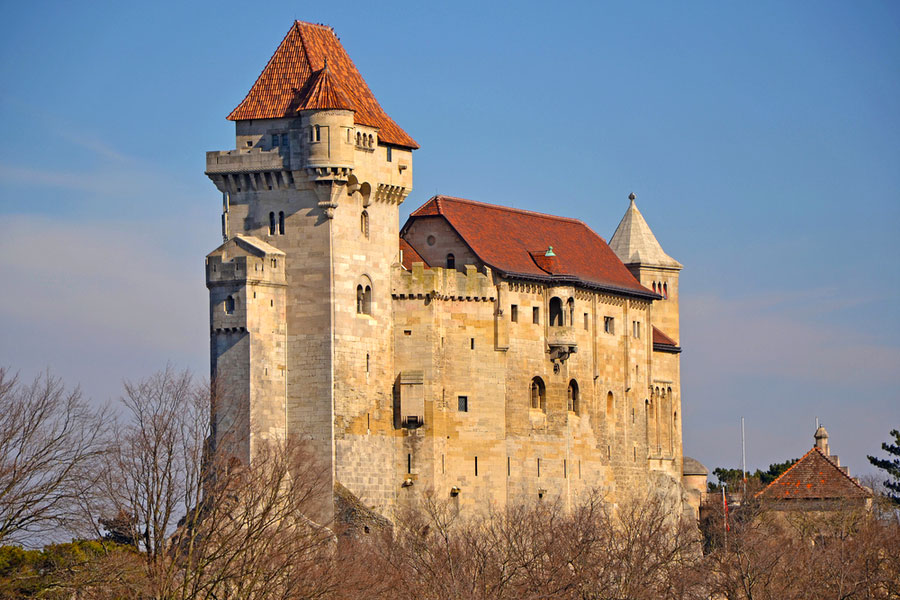 It is alien to wide courtyards, rounded spaces typical of many medieval castles. It looks as if it is staring upwards – not only the elongated towers, but also the 300-meter high hill at its base contribute to such a feeling.

The name of the fortress translates as “Light Stone”. The structure does look quite light: the beige walls of the main building and towers contrast with the bright red roofs.

The massive walls are interrupted by lancet windows, which are not very numerous. Among the decorative elements are the tower structures, cornices and toothed walls in the upper part.

The whole architectural appearance is intended to indicate the monumentality and impregnability of the construction.

For the construction of the castle was used material of appropriate colors from the quarry, located near St. Margareten (Sankt Margarethen im Burgenland). The result is a castle of beige, from which its name comes.

What to see inside

The interior is interesting in the Great Hall with beamed vaults: it contains weapons and pieces of furniture dating from the 19th century.

In the other rooms you can also admire furniture from past centuries, some of them still have reliefs and other decorative elements.

Walking through the halls under the stories of the guide, you can get a full impression of how people lived in this castle during the Middle Ages. The interiors perfectly convey the atmosphere of a bygone era.

If you go out on the balcony, located on the east side, you can admire a magnificent view of the surroundings of Vienna.

One of the most notable buildings is the Chapel of St. Pancratius (Sanctus Pancratius). It was erected in the early 12th century during the construction of the castle. Until now it is used for services.

The chapel contains an image of the Crucifixion, made with red chalk in the 13th century. It is a true jewel of the medieval age.

The castle can only be visited with a guided tour: tours are given every hour through all the open rooms in English and German. Just come and see the interiors without a guide is not possible.

Be careful: the schedule of tours varies depending on the season, so check the official website.

How to get to the castle Liechtenstein

The castle is located at the address in Maria Enzersdorf on Am Hausberg 2.

From Vienna you can take the S-Bahn (S2) – get off at Mödling. Then you need bus no. 262, which will take you to Maria Enzerdorf Siedlungsstr. From this stop you will follow the signs to the place of interest.

Another option is to rent a car and drive yourself from Vienna in the direction of Maria Enzersdorf / Mödling. You can choose your rental car from the Rentalcars.com website.

Tours in Castle Liechtenstein run according to the following schedule:

It is also possible to pass with a family ticket:

The schedule and prices are subject to change – see the official website of the Castle of Liechtenstein at www.burgliechtenstein.eu/en/home.html for exact information.

If you do not want to go to the castle on your own, you can take a guided individual excursion from Vienna. A local guide will take you by car to Castle Lichtenstein, give you a tour of its halls, and then show you other beauties of the Vienna Woods.

This includes a visit to the famous Heiligenkreuz Monastery, a drive through the St. Helena Valley with magnificent scenery, a descent into a grotto to see the largest underground lake in Europe, a visit to the town of Baden and a taste of the local wines.