About 50 km northwest of Mysore is a Tibetan settlement that has been conventionally named Little Tibet. Some 50,000 Tibetans have found their second homeland here.

The Tibetans found themselves in southern Karnataka, 3,000 kilometers from their homeland deep in the Himalayas, not by choice.

They were forced to flee in the late 1950s and early 1960s from extermination by Chinese occupation forces. During those difficult times for the Tibetans, the Indian government provided them with shelter and land for settlement. One such site was an area in southern Karnataka.

The Tibetans are a very patient and hardworking people. Within a few decades they created an island of their own civilization with many farms, temples, settlements, schools, hospitals, and even one of the world’s largest Buddhist universities, Tashi Gomang.

In Little Tibet you can find Tibetan monks dressed in red and shaved naked, numerous Buddha statues, prayer stupas, and ritual objects. For Indians, this is no less exotic than for foreign tourists, as almost no one in India practices Buddhism, except the inhabitants of the most inaccessible mountainous province of Ladakh in the northeast of the country. 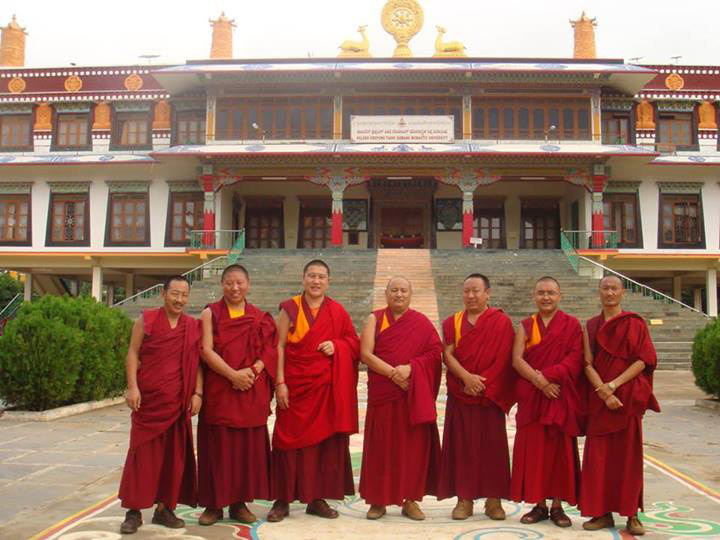 Ladakh is Tibet, its western half. The eastern half of Tibet is occupied by China, which is systematically destroying the ancient Tibetan culture. Therefore it is completely senseless and even contraindicated to go to Chinese Tibet for the sake of pilgrimage, as instead of spiritual enlightenment you may feel spiritual pain from the violated faith and destroyed antiquity. But Tibet is still alive and even thriving in Ladakh and also in Little Tibet in Karnataka.

READ
Orleans: the sights of France

The rapid population growth typical of Asia was limited in Tibet by lack of food. Most of the children died in childhood from hunger, cold, and disease. Monasticism became a natural safeguard against the excessive growth of a population that nature could not feed.

In a similar situation, the nomadic tribes of Mongolia occupied, killed and plundered half the world before becoming obese with looted wealth, weakening and losing all former power and wealth. The Tibetans, on the other hand, embraced the way of the Buddha, thus saving the world from a repeat of the destructive path of the Mongols. They directed their energies to praying and building monasteries, and a surplus of young men and women to monasticism.

The religion of Buddhism does not encourage one to acquire any material possessions. On the contrary, a complete rejection of them is encouraged. As a result of this worldview, Tibetan society in the second half of the 20th century remained at the level of development of thousands of years ago. Tibet was easily overtaken by a more militant and technologically advanced China, with a large proportion of Tibetan survivors escaping the occupation to neighboring India.

But even in India the Tibetans remained faithful to their religion. Their main business has been the building of monasteries and the practice of monasticism. Nearly half of all Tibetan men and women were monastic from childhood to old age. This eventually led to the degeneration of Tibetans as a nation. Today, Tibetans are one of the poorest and smallest nations in Northeast Asia.

But this is only true of the material side of the Tibetan monastic way of life. In terms of spirituality, the Tibetan nation is the custodian of essential values. In fact, Tibetan monks pray for the whole world, which is bogged down in the pursuit of the golden calf, which devours and kills the ecology of the planet.

Tibetans are devoid of any greed. They spend most of their time in prayer. When they are not praying, they build monasteries, grow food, and do subsistence farming. No other nation on earth leads such a way of life.

The Dalai Lama is truly remarkable for his wisdom and humility. He never tried to pass himself off as God on earth, never sought fame, power or personal enrichment, never called for self-worship, and never waved his hands over the crowd promising a guaranteed cure for all diseases. The way of Dalai Lama 14th on earth is very difficult and tragic, he passed it with patience and dignity, and in maturity he became a wise spiritual guide. 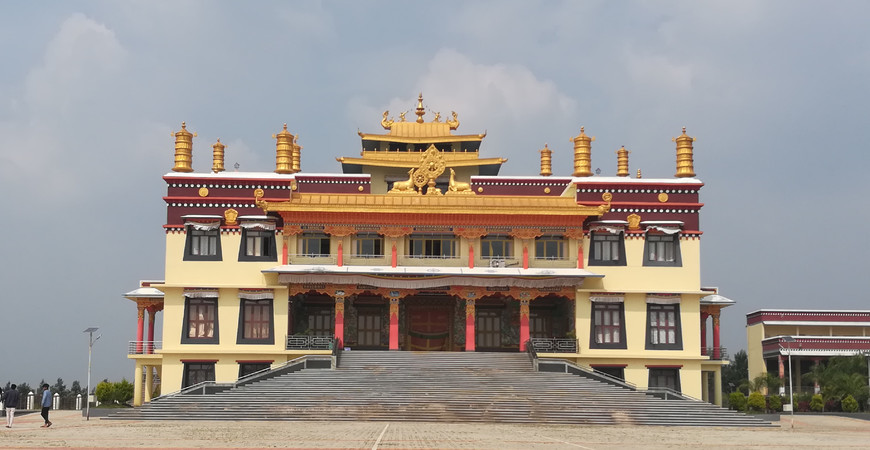 Little Tibet, one of the largest Buddhist communities in India, is located in the town of Bilakuppe (Bylakuppe). This site is famous for its complex of monasteries and temples of the Vajrayana Buddhist tradition, and for being home to Tibetans who preserve their culture and religion in India.

History of Little Tibet in Bilakuppa

Little Tibet in the Indian state of Karnataka was founded in the 1960s due to political events in China. It was first a camp for refugees from the Tibetan region, but today it is a small town where thousands of Tibetans live.

Originally a refugee camp housing only 3,000 people, the population of Little Tibet has now grown to nearly 16,000 residents, 7,000 of whom have taken monastic vows.

Externally, Little Tibet is very different from the nearby towns: it is decorated with bright prayer flags visible from afar, with prayer drums with mantras and prayers inside in the courtyards. The architecture of the temples and other buildings in Little Tibet is in the classical Tibetan style with rich decorations.

The city is divided into settlements or camps (camps) with monasteries of different Buddhist schools. In each settlement there are about 30 families whose way of life is closely connected with the monastic life. The locals are mainly engaged in agriculture, trade and restaurant business.

There are a total of 7 settlements in Little Tibet, separated by a short distance of 4-6 km, which can easily be overcome on foot.

Little Tibet has a school founded in 1984, a modern hospital and a clinic of traditional Tibetan medicine. There are several bank branches, a police office, a post office, and hotels. There is a bus stop and you can rent a cab.

The settlement continues to develop. In 2016, the new Tashi Lunpo monastery of the Gelug tradition opened here, and the Dalai Lama himself attended the celebration.

When visiting the monasteries of Little Tibet, do not forget the rules of conduct in religious places. In the halls and corridors are not allowed to run and behave noisily. It is strictly forbidden to touch the paintings and sculptures. In the temple hall it is better to refrain from talking, so as not to interfere with those present in the religious practice.

Many tourists take the opportunity to learn more about Buddhist teachings and stay in Little Tibet for several days. The monks are friendly to visitors and try to answer questions in English about Buddhism, the monastic way of life, etc.

Indian citizens can stay overnight at Baileikapp, but foreign nationals should obtain permission (Protected Area Permit) in advance, as the Little Tibetan area has a special status.

Snack tourists can eat at restaurants with Tibetan cuisine, which offers national soups, fried and boiled momo, which are similar to dumplings or manti, and other dishes.

Little Tibet in Bilakuppa is unlikely to appeal to those looking for exciting adventures. It is a tranquil place with beautiful nature with a measured monastic life that you can experience.

Attractions of Little Tibet in Bilakuppe

The complex of Buddhist monasteries and study centers in Little Tibet includes monasteries:

In 1963 the first monastery, Namdroling of the Nyingma tradition, was founded in Bailaikapp. It is now the most popular among tourists and is home to 3,000 monks. Its Golden Temple is especially famous, with huge gilded statues of three Buddhas in the main hall: Padmasambhava, Shakyamuni, and Amitabha.

The Sera Monasteries of Little Tibet are home to 5,000 monks. Here twice a day, morning and evening, there are philosophical debates among the monks on a question-and-answer basis. Sera Jae Monastery has a science center that parallels modern scientific research with the ancient knowledge of Buddhism.

There are regular festivals in Little Tibet. The most colorful of these is Losar, the Tibetan New Year, which is celebrated according to the lunar cycle. If you want to visit Bilakuppe and see Losar, you should find out in advance when it will be celebrated: in February or March. During the 15 days of the New Year you can see solemn processions, mystery dancing llamas and a huge tanka (a sacred image on cloth), hung right on the wall of the building.

Throughout the year in the monasteries of Little Tibet there are rituals and various events that you can attend. Here is the schedule for the year at Namdroling Monastery.

The schedule of Little Tibet in Bilakuppa

Access to Little Tibet is open to tourists all year round, but the most beautiful temples can only be visited during their opening hours. These are usually from 7 am to 7 pm.

Visiting Little Tibet is free, but if you want to stay a few days, you have to pay for a permit. You can do this in Delhi, for example.

Hotels at the monasteries are inexpensive, an ordinary room for two will cost about 500-700 Indian rupees. Money from the sale of souvenirs and other activities goes to the development of monasteries, hospitals and schools in Little Tibet.

How to get to Little Tibet in Bilakuppa

The complex of Little Tibet in the tours usually present tourists as a tourist attraction in Goa, but it is located in the state of Karnataka, in the small town of Bilakuppe (Bylakuppe), which is connected with a network of public transport to all major cities in southern India. It is easily accessible from Kushalnagar, where one can hire a cab or walk.

There are also many sightseeing buses to Little Tibet from any city in Goa. If you prefer an independent vacation, it is worth renting a car or scooter, which is very common here.

The map below shows the route from Panaji, the capital of Goa, to Bailaikappa via Mangaluru (Mangalore) on Highway 66 with a turn onto Highways 275 and 88. This is the shortest route, but you can also get to Little Tibet by another road. You have over 550 kilometers to cover on not the most comfortable Indian roads, so be prepared to spend a lot of time on the way.

The Buddhist temples of Little Tibet are located along Golden Temple Road near the entrance to the settlement on the north side.