Livadia Palace in the Crimea 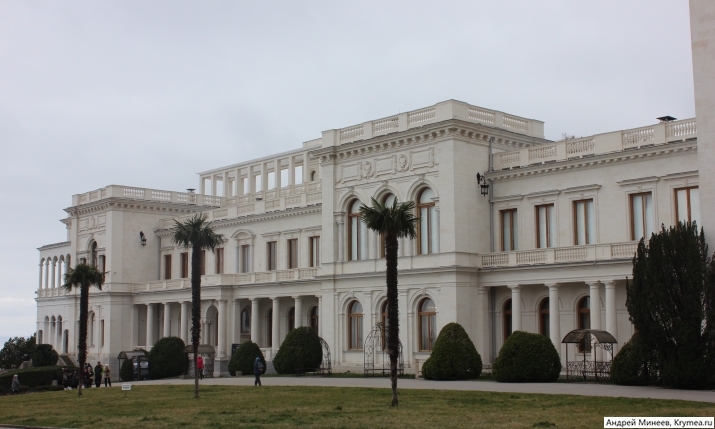 Livadia Palace is the main attraction of the village of Livadia near Yalta. The palace was built for the royal family and was the main residence of Nicholas II in the Crimea. Today it is a museum, which constantly hosts thematic exhibitions. 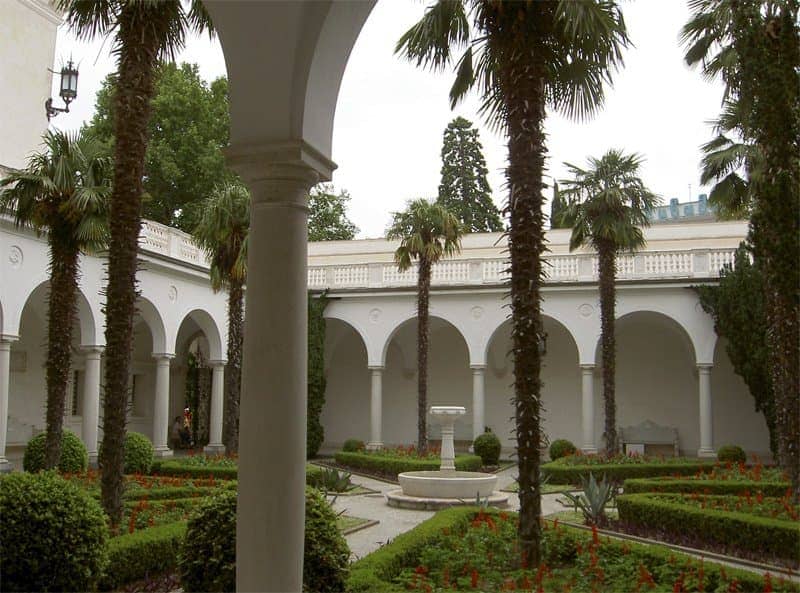 Livadia Palace of Nicholas II, the last emperor of the Romanov family, is one of the main sights in Big Yalta. The history of Livadia Palace began in the 19th century, when the estate was owned by Lambros Katsonis, the commander of the Balaklava Greek battalion. After his death, the estate passed to Theodosius Reveliotis.

In 1834 the estate of Count Pototsky was built here. On the site of a small house, which passed to Leo Severinovich from Theodosius Reveliotis, according to the project Elson was built 35 buildings, among which:

The project included a park and a greenhouse. Thanks to this Livadia Palace (in its original form) is considered the oldest palace park on the South Coast.

In 1860 the Count died, and his heirs decided to sell the palace to Alexander II, who wanted to cure his wife and Empress Maria Alexandrovna tuberculosis. 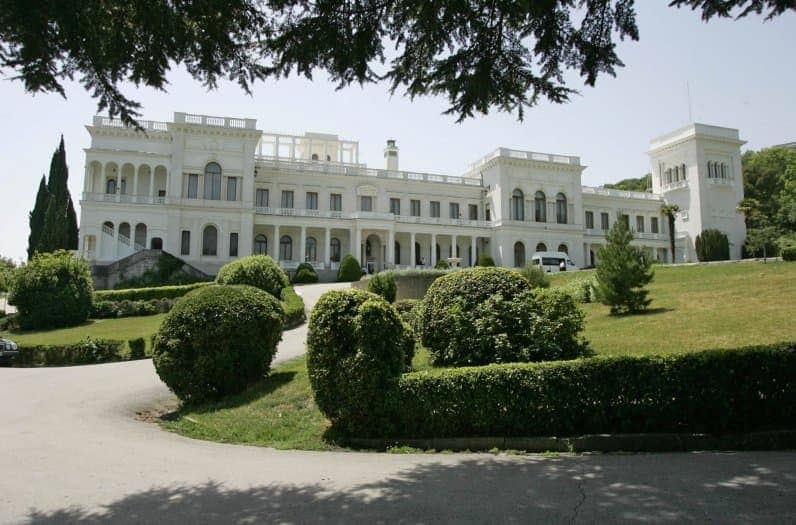 Livadia Palace of the Romanovs

The Emperor bought the lands in 1861, after which the construction of a new palace, called Livadia Palace, began. The project was entrusted to Ippolit Monighetti. As conceived, it included: 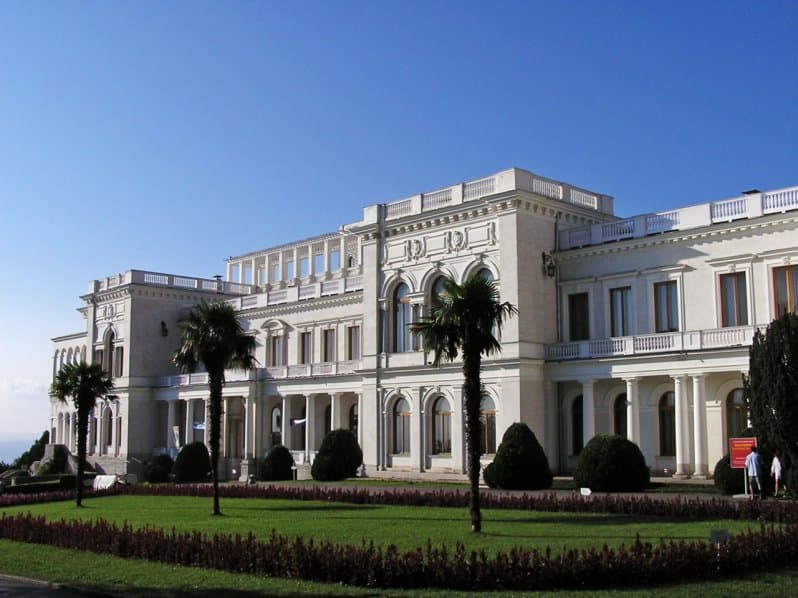 The reconstruction of the Livadia Palace lasted from 1862 to 1866. It reflected the Empress’ desire to make the palace as simple as possible.

However the palace in such a form did not live up to the contemporaries. The Great House was soon rebuilt, and the Small House was blown up by the Nazis during their retreat. The restored Heir’s House was rebuilt 20 years after its construction – the walls were cracked because of rising groundwater, so the palace was moved in its original form to another place. 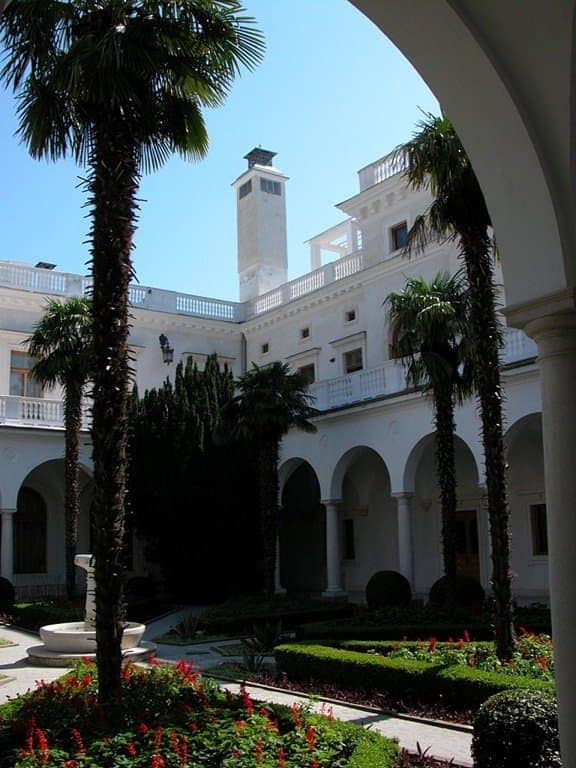 In 1904, the main Livadia Palace, the photos of which are now completely different from the original version, also needed repair. The tsar decided to completely replace it and build a White Palace in its place.

For the construction of spared no expense: Livadia was the center of foreign policy life of the country – here were received diplomats and foreign rulers. Construction was engaged in two architects: Nikolai Krasnov (who had experience in building Dulber, Yusupov Palace and Haraks) and Gleb Gushchin. 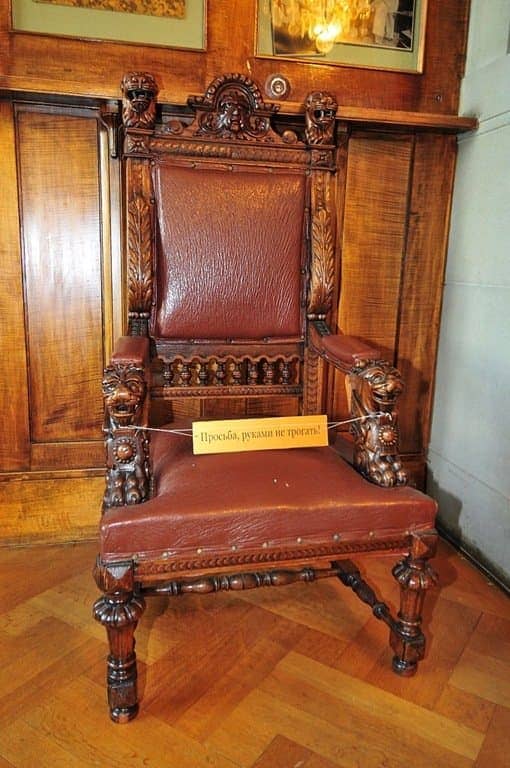 The official opening took place in 1911. It had 116 rooms and 4 courtyards. Nicholas II created the Livadia Palace for ages and planned to live there for a long time. But he stayed there only 4 times. Even abdicating the throne, he wanted to move to live in his beloved Livadia. But instead the emperor was sent to Tobolsk.

The Livadia Palace and the Yalta Conference

The palace was destroyed in 1918 when German troops invaded the palace. Then White Guards and bodies of the Ministry of Agriculture of Bolsheviks were located there.

After that Livadia Palace (Crimea) repeated the fate of the other Romanov residences (for example, Massandra Palace) – they opened a sanatorium there. In 1925 it was opened for the peasants (the tickets and admission were free of charge). In 1931 it was declared a climatic health resort. 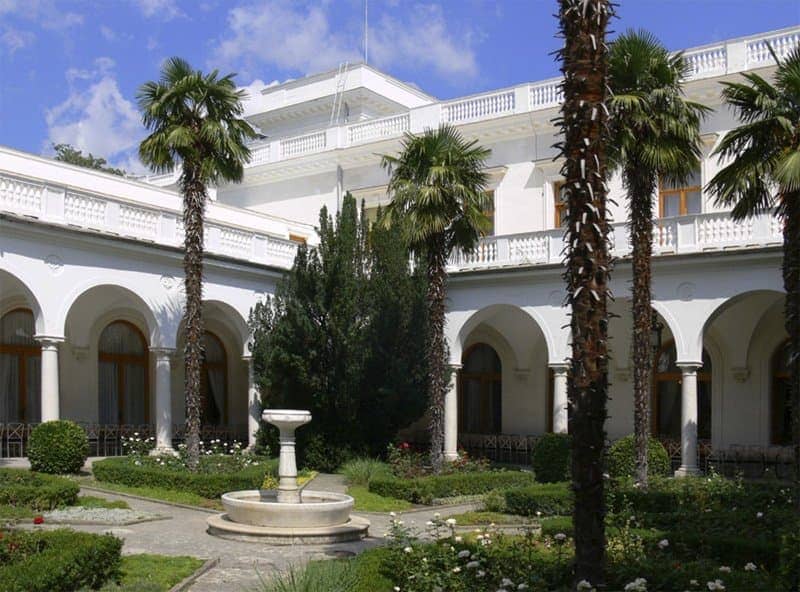 The practice of receiving VIPs continued after the collapse of the empire. In 1945 the Yalta conference with Roosevelt, Churchill and Stalin took place in the palace. Then Livadia Palace was given to the NKVD and another Gosdacha was formed here.

In 1953 it became a trade union health resort. And in 1974 an unexpected for the Romanov palaces during the Soviet time event happened – it was opened for tourists. There were two exhibitions: 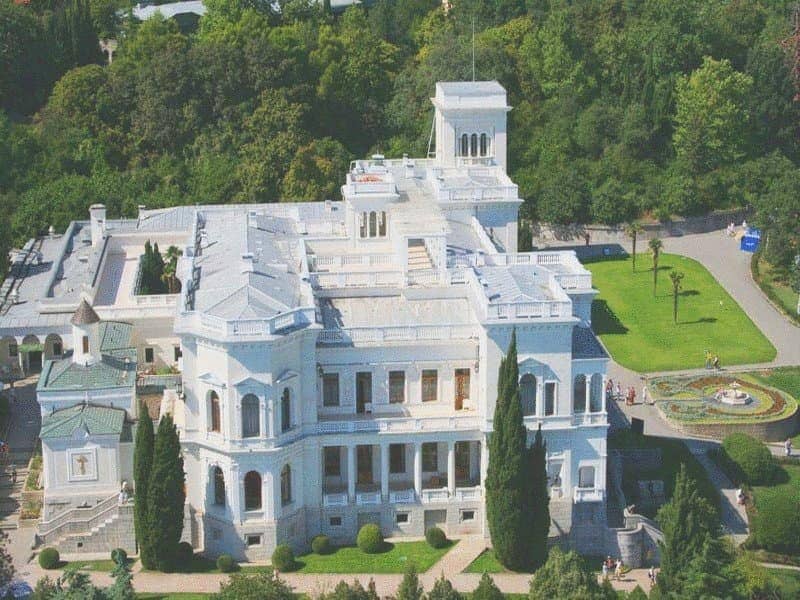 In the palace many films were shot. Among them there are such famous films as: 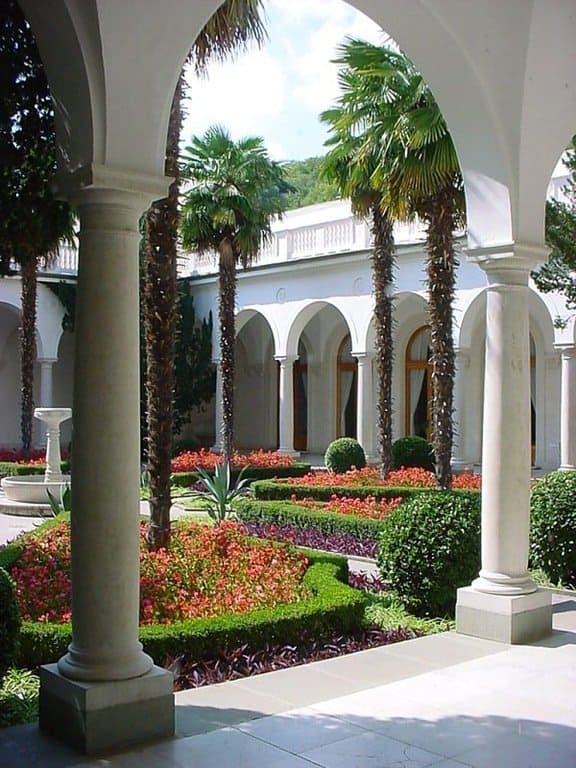 At the same time, meetings of heads of state are still held in the famous White Hall. Near the palace are monuments to those who contributed to its popularization. So on February 5, 2015 opened the pedestal of the participants of the Yalta Conference – Stalin, Churchill, Roosevelt. And a little later (May 19) at the palace installed and bust of Nicholas II, who gave the world this magnificent example of Russian architecture. In 2017, a monument to Alexander III was also installed in the park. 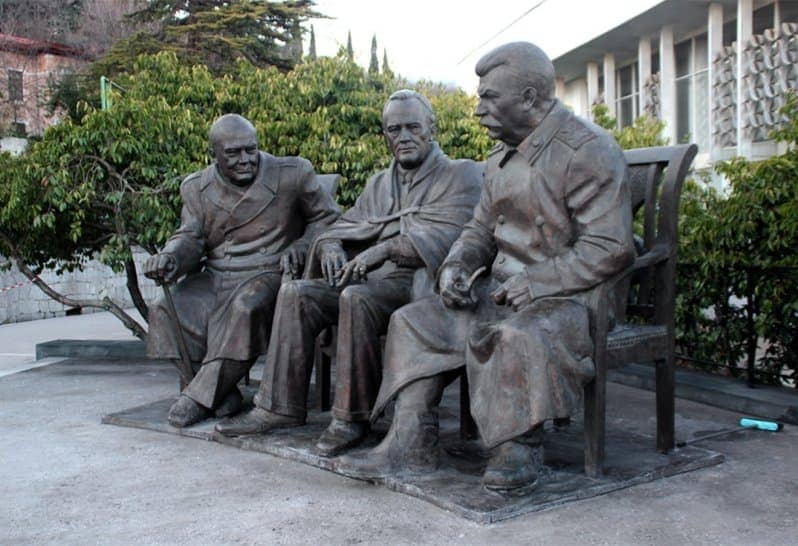 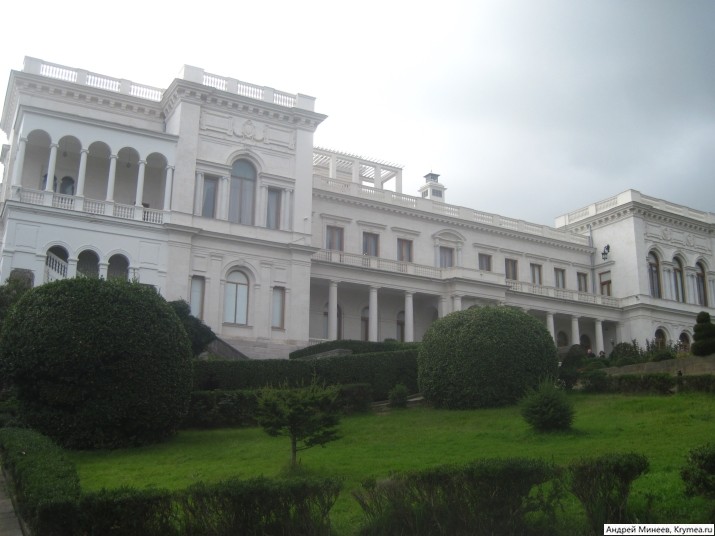 There are many other interesting places near Livadia Palace: right from the porch begins the famous Sunny (or Tsar’s) Path, leading along the coast to the Swallow’s Nest. The 7-kilometer-long walking trail is still in demand by tourists today, although it is largely built up with residential buildings that hide some of Yalta’s delightful views.

Next to the palace is the Vladimir Khromchenko Organ Music Center. 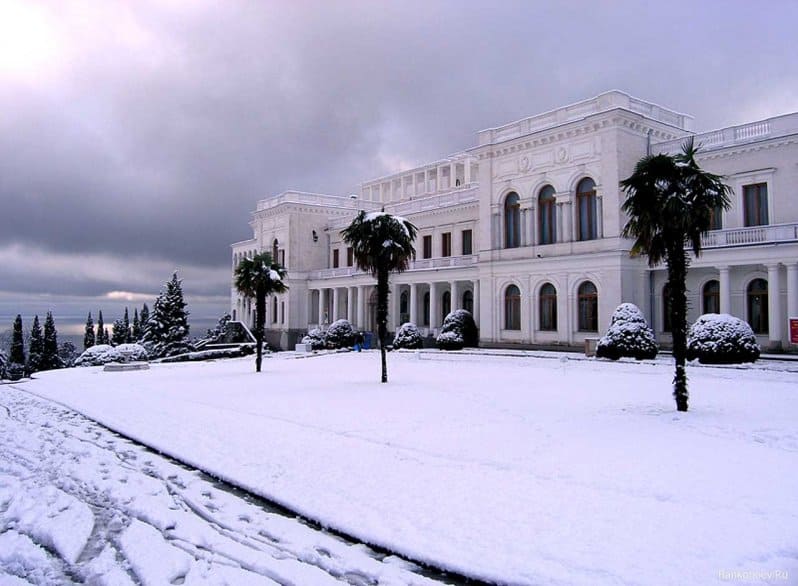 You can get into the Livadia park for free. But you have to pay to visit the exhibitions inside the palace. There are different price lists depending on the chosen program. If you choose a general tour to the Livadia Palace, the price of the ticket in 2022 is:

The palace in 2022 works Monday through Sunday. Without days off. Working Livadia Palace in Yalta from 10:00 to 19:00. Learn more about Livadia Palace, working hours 2022 tell his official website – Livadia Palace.rf.

White Palace became a museum in 1993. It has the following expositions: 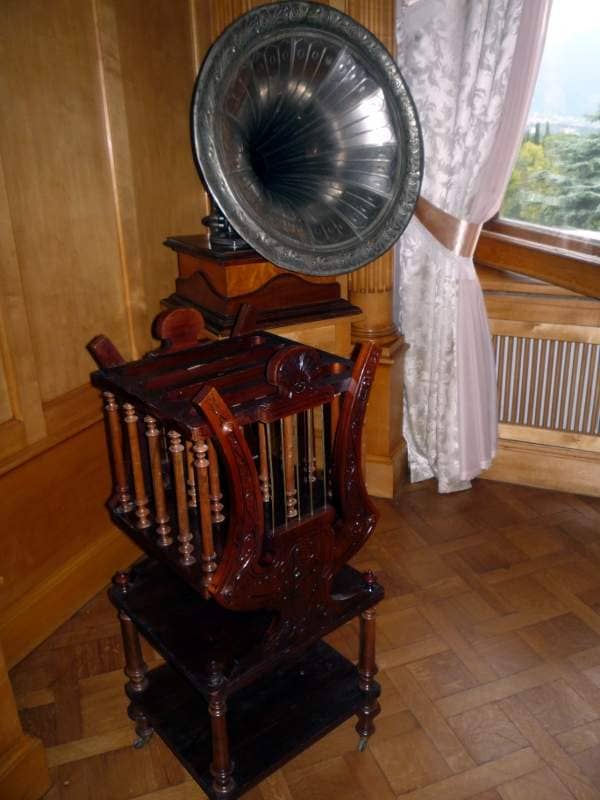 Livadia Palace – how to get there from Yalta

Here I will answer the question Livadia Palace – how to get to this place of interest? To get to the museum is easiest from Yalta. It is enough to take a bus at the bus station (№ 5, 11, 27, 32) and get off at the “Livadia” stop. The address of Livadia Palace is 44A Baturin Street in Livadia village.

If you want to get there, just follow the signs. 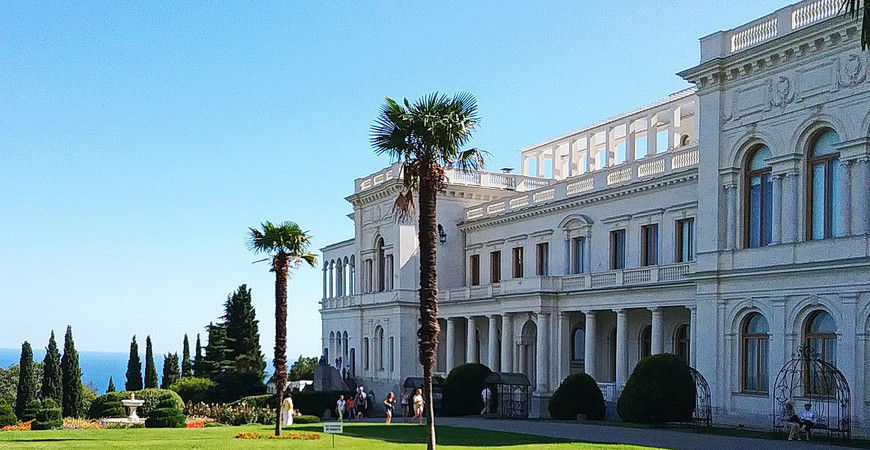 Livadia Palace is located on the southern coast of Crimea not far from the city of Yalta. It was built for the recreation of the imperial family. Three generations of the Romanovs spent their summer vacations in this palace. The most striking historical events and fates of the people of the XX century are connected with it. Throughout the century it has been given different roles: residence of the Romanov family, a sanatorium, a hospital and a state summer residence №1. Many times the palace hosted international meetings and conferences. Today the Livadia Palace is open for everyone.

Guided tour of the main exhibition:

The cost of visiting the interactive exhibition about the Imperial family – 100 rubles.

Detailed information on the official website of the Livadia Palace.

History of the Palace

Livadia Palace was built over a century ago. Its history goes back to 1911. The project was made by the Yalta architect Nikolai Petrovich Krasnov by order of Emperor Nicholas II. In the shortest possible time of 16 months he managed to complete the construction of the palace and park complex of several buildings. On completion, Nicholas Romanov was delighted with the work. Every summer for four years, the imperial family vacationed and exercised in his secluded estate in Livadia. The palace became a favorite place for its guests. In 1914 the Romanovs left the palace and never returned.

When the Bolsheviks came to power, the Livadia Palace was converted into the first peasant sanatorium. After Yalta was liberated from the Nazis during the war, the palace became a hospital for soldiers.

In February 1945 when the palace was chosen for the Soviet, British and American governors’ conference in Yalta (Crimea) it became a separate page of its history. At this time the whole American diplomatic delegation with President Roosevelt was accommodated there.

After the war up to 1953 the palace was assigned as State Dacha №1 for the higher authorities of the country. Only in 1993 it became a state museum. Nowadays it is called “Livadia Palace Museum”. Since 1998 international meetings of high ranking officials are regularly held in its halls.

In the halls of the Livadia Palace there is a museum with two permanent exhibitions. The first one is devoted to the family of the last emperor, the second – to the Crimea Conference of 1945. There are also regularly organized temporary thematic exhibitions. Specialists count about 116 rooms, made in different decorative styles.

They include display rooms: the Italian and Arab courtyards, the state dining room, the vestibule, the waiting room, the billiard room, the study of the Emperor and Empress, the bedroom of Their Imperial Majesties, the library, the drawing room, the small dining room and the classroom for children.

One of the most famous photos of the “Big Three” – Stalin, Roosevelt and Churchill – was taken in the Italian courtyard of the Livadia Palace.

The permanent exhibition is dedicated to one of the main hobbies of the last emperor. There are collected photographs and pictures on hunting themes. Hunting trophies of Nicholas II can be seen at the exhibition “Tsar’s Hunting”.

Tours of the Livadia Palace

READ
Schönbrunn Palace in Vienna, description and how to get there

The sightseeing tour lasts for 1 hour and 30 minutes. During it visitors can see the ceremonial halls of the first floor, listen to the story of the guide about the events of February 1945, connected with the work of the Yalta Conference. The second floor is dedicated to the three generations of the Romanovs and their stay on the South Coast of Crimea. There is a wonderful view to the sea from the upper terrace.

How to get to the Livadia Palace from Yalta

Livadia Palace is situated not far from the Southern Black Sea coast, in the Livadia Village, Yalta District of Crimea. It is situated about 3 km from Yalta, on the eastern slope of Mogabi mountain. You can reach the palace by public transport or by car.

From the railway station in Simferopol there are buses and trolleybuses “Simferopol-Yalta”. Get off at the bus station Yalta.

From the bus station or the city center in Yalta:

Then a five-minute walk through the territory of Livadia Park.

It will take about 30 minutes by car from the center of Yalta. This is a good way to get there by the South Coast Highway or the Sevastopol Highway.