Victoria Falls and Livingstone Falls Discovered by a Scottish Explorer

Did the poor Scotsman David Livingstone ever think he would one day be recognized as one of Africa’s greatest explorers? Could he have imagined that he would receive the Gold Medal from the Royal Geographical Society of London? Did he know that a group of mighty waterfalls on the Congo River would receive the eloquent name “Livingstone Falls”? Probably not. But the traveler who sets out on the road without setting himself great goals is a bad one….

The famous traveler, explorer and geographer David Livingstone was born in a small Scottish village in 1813. To enter university, he had to study several languages (Latin and Greek) and mathematics. The life of the future scholar was not easy. To be able to learn, he was forced to work hard.

At university, the goal-oriented young man chose a course in theology and medicine. He managed to get a doctor’s degree. After graduation, as a missionary (a leader of a religious organization that promoted the conversion of unbelievers to Christianity), Livingstone traveled to Africa. 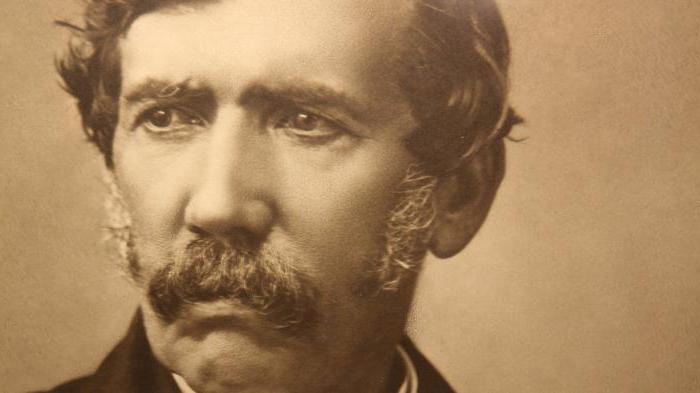 For a full 15 years Livingstone traveled to remote parts of Africa. He studied the continent’s geography and indigenous languages, fought against slavery and the slave trade, and established religious missions. He walked more than 50,000 kilometers across the continent. In doing so, he described many rivers, lakes, and waterfalls. One of the waterfalls discovered by Livingstone is famous all over the world – Victoria Falls. And a whole group of waterfalls is named after him.

Read more about the group of waterfalls

The Livingstone waterfalls are considered the largest in the world in terms of water flow rate per second. The group includes 32 waterfalls, rolls and rapids on the Congo River. They are located on a stretch of the river, which is 350 km long. Many of the waterfalls have names of their own. 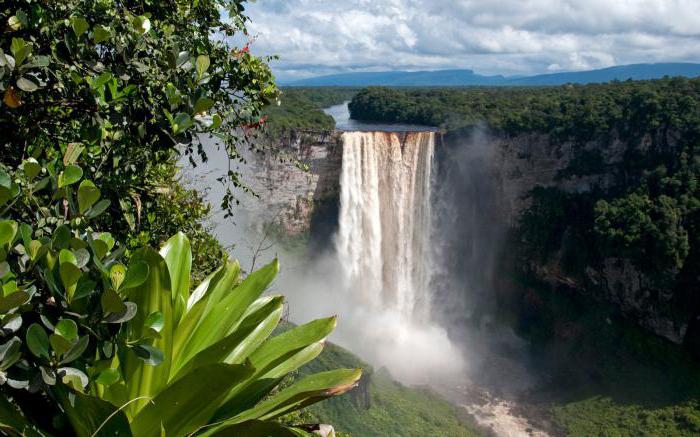 The section of the river where Livingstone Falls are located has several distinctive features. The flow of water here passes through a narrow channel, the maximum width of 800 m, and the minimum – 300 m. The depth of the river at the site is about 230 m.

Who gave the name?

David Livingstone was a modest man. He explored the headwaters of the Congo in detail, but he did not give the name to the waterfall system to him, but to Henry Morgan Stanley. He also explored Africa and, on one expedition, searched for Livingstone’s missing band, who had contracted malaria and was very ill. Stanley, on behalf of the New York Herald, delivered a shipment of food and medicine to David. However, Livingston refused to return to England with it. 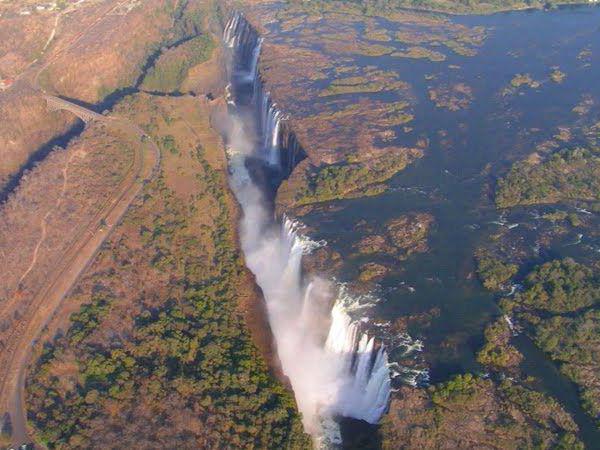 It is worth adding that the Scottish explorer never made it to the lower Congo. Henry Morton Stanley, on the other hand, traveled these places himself. Of course, this man was somewhat of an adventurer and somewhat embellished his adventures, but he dedicated the Livingstone Falls system to a man he respected and valued as an explorer of Africa.

One of the amazing places that it was Livingston who discovered is Victoria Falls. It is rightly called the main attraction of South Africa. The waterfall is located on the Zambezi River. One side of it belongs to the state of Zambia, the other is in Zimbabwe. The waterfall is unique. This is the only place in the world where water falls from a height of over a hundred meters, the stream, the width of which exceeds 1 km. 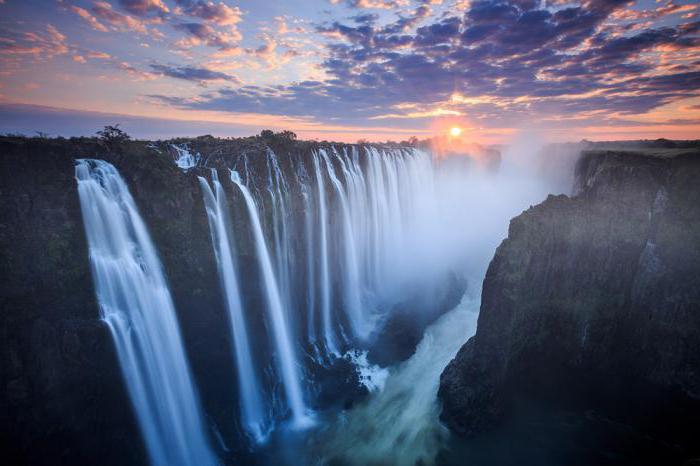 What else did Livingstone notice? The waterfall in Africa, on the banks of which he became the first European, raises so many splashes that they can be seen from many kilometers away. The cloud of spray is adorned by a bright rainbow. It is now known that it can rise up to 300 meters above the river. The falling water enters a narrow gorge that winds along a sandy basalt plateau.

David Livingstone was very protective of local place names. He always tried to preserve them and make them official. But in the case of Victoria Falls, he just couldn’t help himself, and the only time he deviated from his rules. He was so amazed by the grandeur of the sight that he considered it worthy to immortalize the name of the Queen of Great Britain – Victoria. The scientist also allowed himself a boyish prank. He carved his initials on a tree and the year in which he found the place. In the traveler’s diaries, a record was made of the majestic discovery on November 17, 1855. 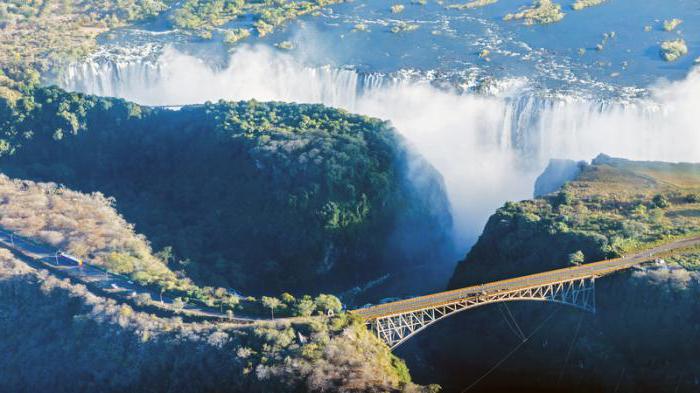 The local population called the waterfall “Mosi-oa-tunya,” which can be translated as “the smoke that rumbles.” Rumors of a grandiose waterfall had been reaching the explorer for four years. But it was very hard to believe that such a grandiose place existed in nature.

Victoria Falls was majestic and beautiful, but when the emotions subsided, it caused the traveler a sense of frustration. It was an insurmountable barrier on the way inland. Advancing through Africa along the Zambezi River, Livingstone thought it more important to discover the Batoca Plateau. Here the missionary planned to establish a settlement accessible by a navigable river. But because of the waterfall crossing the river, it was not navigable along its entire length, and the settlement remained only in the plans. 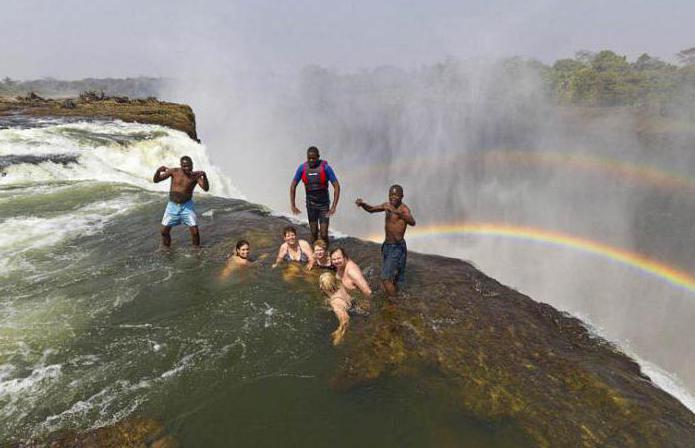 Tourists did not get to see what Livingstone discovered until 1905. At that time the railroad to the town of Bulawayo was built. This state of affairs continued until the end of British colonial rule. Today on the Zimbabwean side an entire town was built for tourists – Victoria Falls. It is home to the national park of the same name. Constant war and unrest affect the flow of tourists, but even they can not stop it completely.

On the Zambian side, the shore of the Falls is part of another national park, Rattling Smoke. Many tourists pass through here as well. And the waterfall is also a UNESCO World Heritage Site. 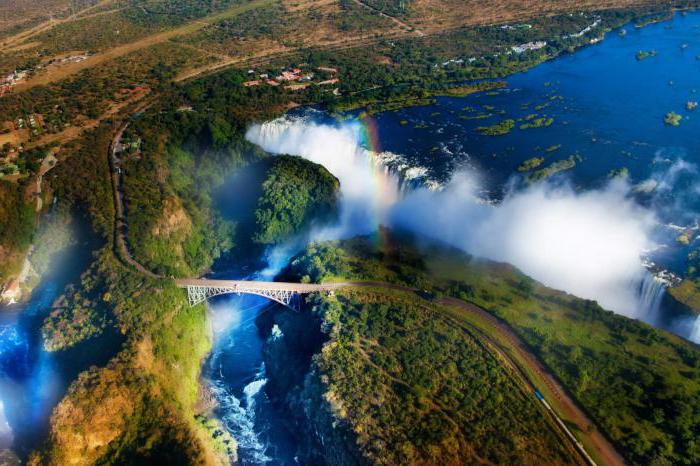 Will the name change?

As strange as it may sound, the question is not rhetorical. Despite the fact that David Livingstone did much for the black African population, defending their right to freedom, without considering that he undermined his health and died in the process of exploring the continent, today there are people who disagree with the name he gave. The ruling party of Zimbabwe considered the name “Victoria” a glorification of colonialism and by its decision returned the historical name “Mosi-Oa-Tunya” to the waterfall. Will this entail a global change? It’s hard to say, but local maps are gradually changing the name.

Livingstone Falls on the Congo River

A group of rapids and cascades is located on the border of the state of Congo and the Democratic Republic of the same name. Here are the Livingstone Falls, a natural landmark in western equatorial Africa.

History of the name and discovery

Cascades on the Congo River should not be confused with the famous Victoria Falls, which is located on the border of Zimbabwe and Zambia. The latter was visited by the geographer Livingstone, while the group of rapids was not. However, the traveler’s colleague Henry Morton Stanley, a journalist and explorer, was present there. 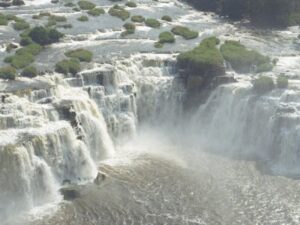 Correspondent participated in the expedition, which went in search of the missing David in 1971. Six years later, Stanley surveyed the Congo Current and became the first European to see the water rapids. The journalist later named the network of waterfalls after the great explorer Livingstone.

Henry Morton Stanley crossed Africa twice and discovered miles of river that led inland. The traveler contributed to the history of exploration of the continent and the waterway of the Congo.

Livingstone Falls is located in central Africa in the lower Congo, occupying 350 kilometers of river length. The rapids have a rough current, the water velocity is high. And the channel of the Congo in the lower reaches is narrow, which for a full-flowing river of 300 m is not enough. The speed of the water flow reaches 42 thousand cubic meters per second.

In terms of fullness, the river is second only to the Amazon. If you consider that the rapids are considered a single waterfall, the cascades will be the first in the category of water flow. Now there are 2 hydroelectric power plants operating there, the opening of others is planned. 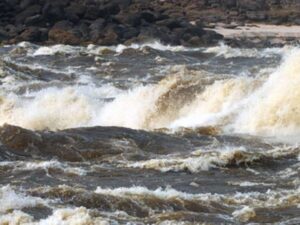 Cascades on the Congo River.

There are 32 streams of varying heights (some sources call the figure 70 pieces, including small ones). The largest waterfall is Inga, 900 meters wide. Here there is a section where the water flies down from a height of 20 m.

Another powerful waterfall – Boyoma (before 1983 it was called Stanley after the journalist-researcher), which consists of 7 rapids 60 m high. The cascade is 150 km long and is interrupted by safe deep water sections and flumes. The height of the fall of the Boyoma Falls is 40 m. Every second 17 cubic meters of water fly over the turbulent stream, which made it possible to enter the Guinness Book of Records.

The road to the waterfalls

You cannot get to the Republic of Congo directly. From Russia, there are no regular flights to the state, only flights with connections. There are flights from Rome, Brussels, Paris, Zurich and Lisbon to the capital of the country. There are flights between Brazzaville and the coastal city of Pointe-Noire, which also has an international airport. Therefore, it is possible to travel to the Congo by plane.

If this route seems complicated for tourists, the alternative is direct flights from St. Petersburg and Moscow to the neighboring state – the Democratic Republic of Congo. It takes 14 hours to reach the capital of Kinshasa. Russians need a visa to visit African countries.

From Kinshasa to Brazzaville you can take a ferry, and this way of traveling is not safe. Although the route passes by the river in places where the current is calm, the ships are often overloaded or in improper condition. Tourists are not recommended to travel on the water if they don’t have to.

It is possible to cross the border by bus, but this method of travel is not developed and expensive.

Livingstone Falls ends in Matada, a port city located in the Democratic Republic of Congo. The settlement is located on the left bank of the river, so tourists staying here do not have to make a long walk.

sightseeing tours do not include a visit to Livingston Falls. The rushing streams are shown from afar; tourists see the rapids as they pass through. Foreigners are encouraged to visit only the largest Inga or Boioma Falls. You can see the grandeur of the river on a sightseeing flight over the Congo (tickets are purchased in advance). 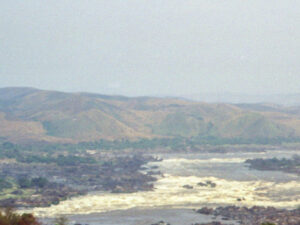 The swirling torrents of the Congo River

Extremes set out from the source of the waterway to repeat Stanley’s journey. The difficulty of the journey is the longest road along the river, and Livingstone Falls are not marked on the map of Africa. In the guidebooks you can only find a description without details and coordinates. Because of the political situation in both states, conflicts are possible, and the Congo flows on the border.

Livingstone Falls is a unique natural phenomenon. Getting to the rapids of the river is not easy, the journey will require monetary and physical costs. To go the way of the pioneers, it is worth preparing for the difficulties.