10 Little Known Facts about Scotland Yard in the Victorian Era London Police Scotland Yard, once a household name in the Soviet Union thanks to the Sherlock Holmes movie series, has been around since 1829. Originally the headquarters of this police institution was located in Great Scotland Yard Street in Whitehall and in 1890 it moved to a new building on the banks of Thames, which became known all over the world as New Scotland Yard. In this review, a few little-known facts about the London police during Queen Victoria’s reign.

1. Scotland Yard was built by prisoners. 1890 Between 1890 and 1966, two buildings known today as the Norman Shaw buildings, named after their architect, Richard Norman Shaw, served as the headquarters of the Metropolitan Police. The buildings are located on Victoria Embankment and are in the Victorian Romanesque style, on a granite base with classic red and white Portland brick and white stone finishes. The granite was quarried by inmates of Dartmoor and other prisons. They also worked to finish the facades of the buildings.

2. The underpass to the House of Commons and House of Lords 1880 Norman Shaw’s North Building of Scotland Yard stands on a foundation originally not intended for it at all. In fact, it was to serve as the foundation for the National Opera House, laid in December 1875 by Prince Alfred. However, there was not enough money for the construction and it was discontinued. And in 1880, the Metropolitan Police bought the land and Scotland Yard was built on the site.

The foundations and underpasses were retained. According to James Henry Mapleson, the opera impresario who worked on the construction of the opera house, there are underground passages connecting Scotland Yard with the House of Commons and the House of Lords, as well as with the railway station. 1906 Although Norman Shaw’s design for the north building was approved by the police, when construction was completed in 1890, it was found to be no longer sufficient for the increased needs of the Metropolitan Police. It was not until 1906 that the second building, the southern one, with its extensive network of subway lines, was finally completed as well. The photo from 1898 shows the northern building, and in the middle, in the foreground, one of the stations can be seen.

4. the maintenance of the cabs 1862 In the Victorian era, the Scotland Yard Metropolitan Police were charged with the role of inspecting cab and omnibus drivers for licenses. In 1862, each of the drivers of four-wheeled vehicles had to obtain a number and pay a license fee (one shilling per day of work). Everyone who intended to become a driver filled out a special form and handed it in to Scotland Yard.

There they had to pay another five shillings for the badge and half a crown for the tickets. After examining the vehicle and passing the examination, they could begin work. But every year the vehicle had to be inspected.

5. Working without days off 1910 In 1870 industrial workers in England were officially granted the right to rest. From 1874, their workweek was 56 hours, 10 hours from Monday to Friday and 6 hours on Saturday. As for police officers, they had no right to rest during the Victorian era. It was not until 1910 that they also had an official day off. Winston Churchill brought this law through Parliament. 1886 In Victorian England, police officers were neglected by the authorities, and in periods of popular unrest, they also experienced contempt from the protesters. In 1866, a riot broke out in Hyde Park, prompted by the decision of the Foreign Secretary to ban a rally of supporters of the League of Reform, in repression of which 28 policemen were killed. However, the police did not receive any sympathy from the authorities.

In 1886 the Riot Compensation Act was passed. The Victorian view was that the police had a duty to stop riots. If they failed to do so, they had to make amends for the damage caused. 1868 During the Victorian era, members of the Surveillance Unit at Scotland Yard helped former prisoners start an honest life. And if a person took a job, the police officers did not inform the employer of his past. These departments kept archives of all the cases of those released from each prison to keep track of possible contacts between them. Police investigators used these archives to look for similarities to previous crimes. 1869 The Crime Museum, or “Black Museum,” contains items that are evidence in the investigation of the most high-profile crimes. Unlike regular museums, for a long time only police officers visited this creepy repository, but in 2013 the museum opened to the general public. In 1869, police officers were allowed to seize objects belonging to prisoners to educate their officers. That’s when Inspector Nim organized the first exhibit. He also owns the very idea of establishing such a museum. 1888 The brutal Whitechapel murders of 1888 remained unsolved. Five women were victims of an unknown criminal named Jack the Ripper. But six more, presumably his own victims, have since been discovered. Five of them were identified, and a sixth, an unknown woman, was found in the basement during the construction of the Norman Shaw North Building for Scotland Yard. 1884 On May 30, 1884, at night, an explosion occurred at Scotland Yard that severely damaged the Metropolitan Police Criminal Investigation Department buildings and the office of the Special Irish Branch. Fortunately, only neighbors and a cab driver were injured by shards of glass. Two other explosions occurred elsewhere in the city. All of these terrorist attacks have been linked to the Fenians, members of the Irish Republican Brotherhood.

For residents of the former Soviet Union, Scotland Yard is inextricably linked to the name of the legendary movie detective. We collected 8 real facts about the most famous fictional detective Sherlock Holmes.

The daily routine of Scotland Yard.

185 years ago, on September 29th 1829, the criminal police of London was created and was called Scotland Yard. Archival photos of the largest police institution in England – in the photo gallery of Ria.ru. 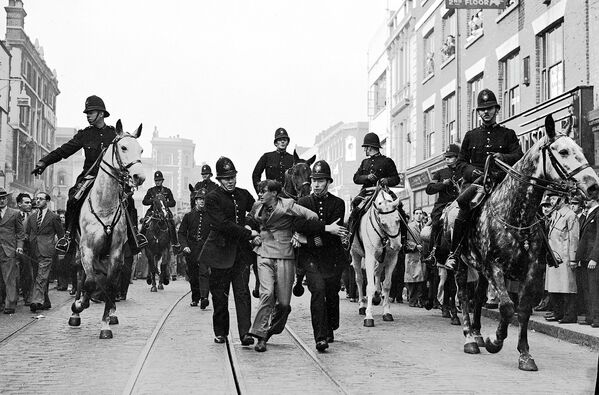 © Fotobank.ru/Getty Images / J. A. Hampton Demonstration of an armored car for Scotland Yard. 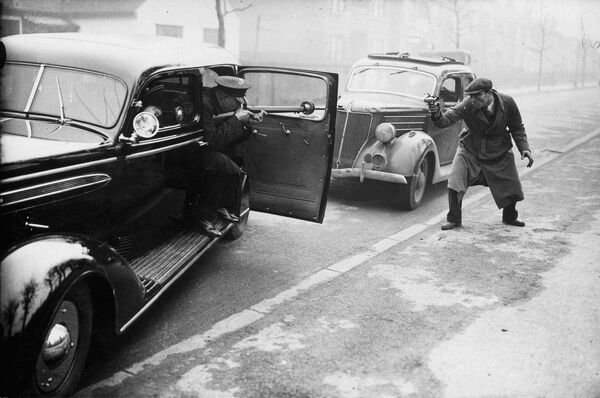 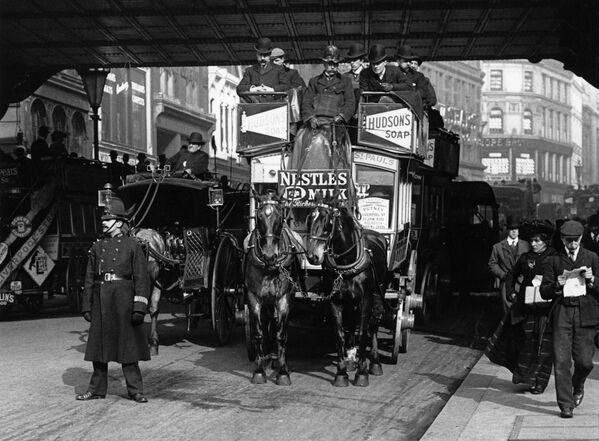 © Fotobank.ru/Getty Images / Hulton Archive By 1890, the staff of the London Police had grown from the original 1,000 officers to 13,000. Scotland Yard now employs 27,000 people who are responsible for an area of 787 square kilometers and a population of 6,750,000 people living in and around London. 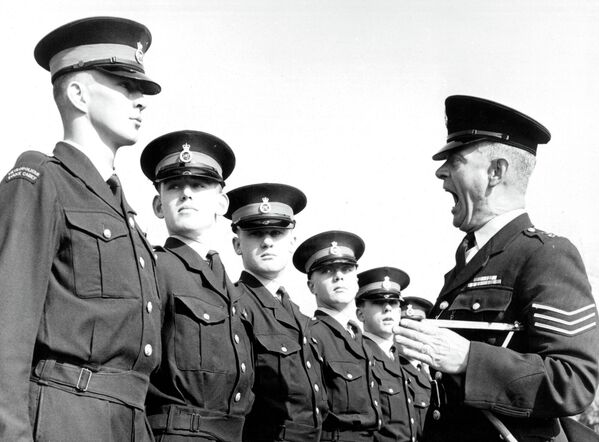 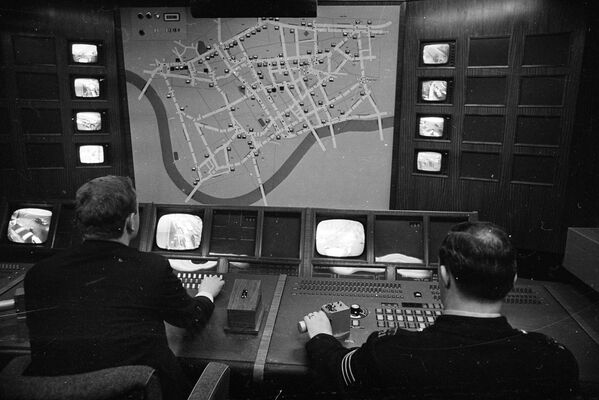 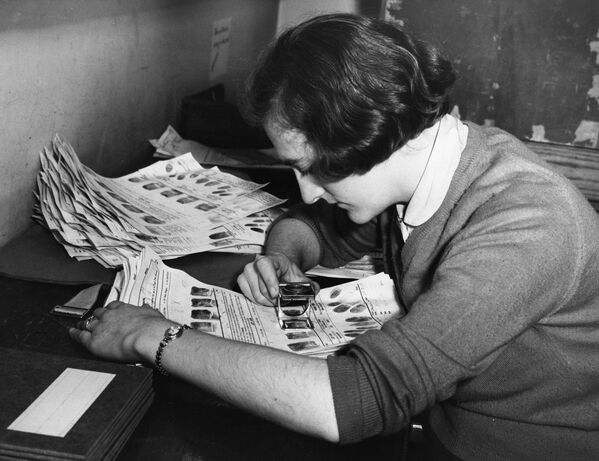 © Fotobank.ru/Getty Images / Keystone A Scotland Yard policeman escorts ducks on their way to the Thames. 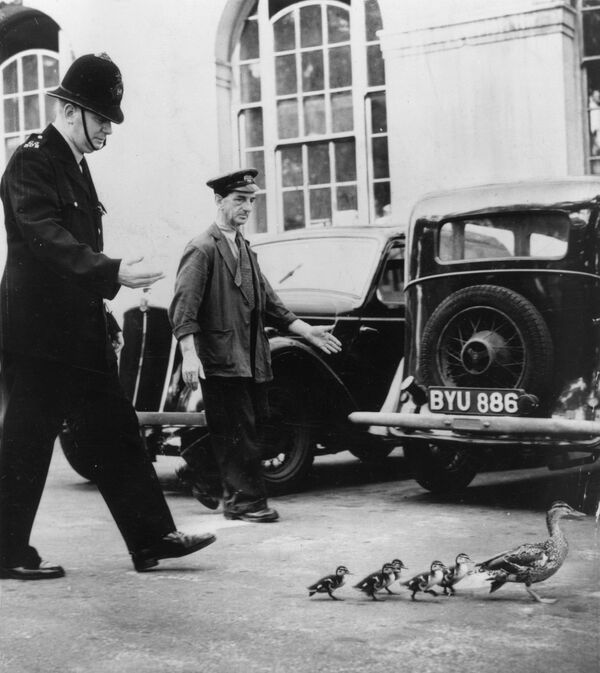 © Fotobank.ru/Getty Images / Steve Eason Police during a protest against Thatcher’s unpopular per capita tax in Trafalgar Square in London in March 1990. 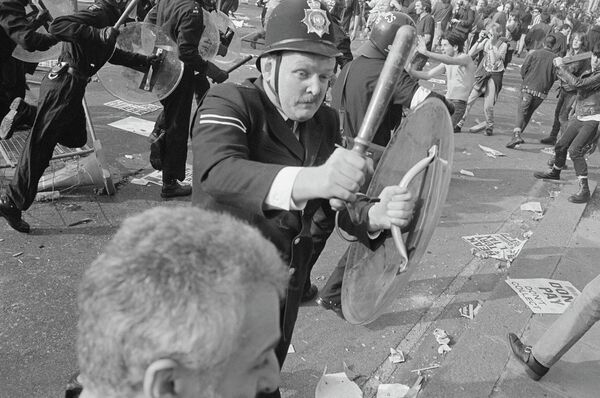 Police during a demonstration against Thatcher’s unpopular capitation tax in Trafalgar Square, London in March 1990.

© Fotobank.ru/Getty Images / Hulton Archive Ballistician Robert Churchill examines a bullet with a microscope to make a report for Scotland Yard investigating the murder of a policeman, 1927. This investigation, which resulted in the conviction of two criminals, was one of the first to use ballistics as evidence. 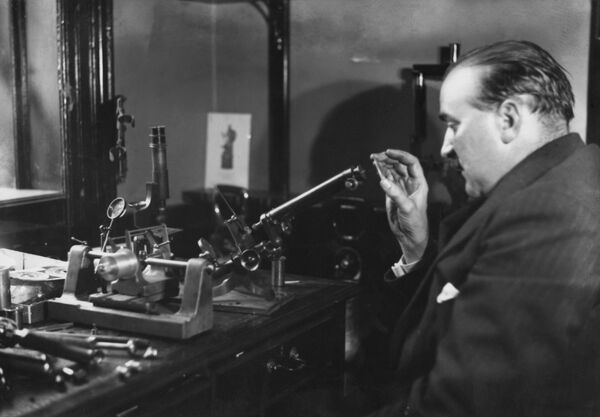 Ballistician Robert Churchill examines a bullet with a microscope to make a report for Scotland Yard investigating the murder of a policeman, 1927. This investigation, which resulted in the conviction of two criminals, was one of the first to use ballistics as evidence. 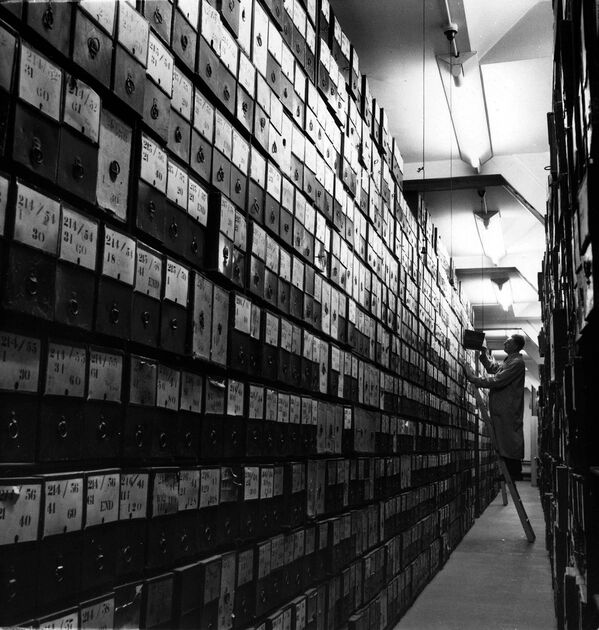 © AP Photo The Beatles musicians with police officers during the filming of “Help!” (Help!), 1965. 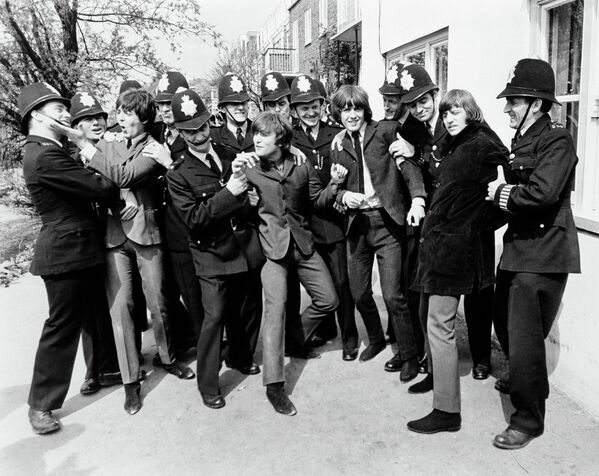 © Fotobank.ru/Getty Images / Reg Speller A policeman with a gun seized during a gun amnesty on September 29, 1961. 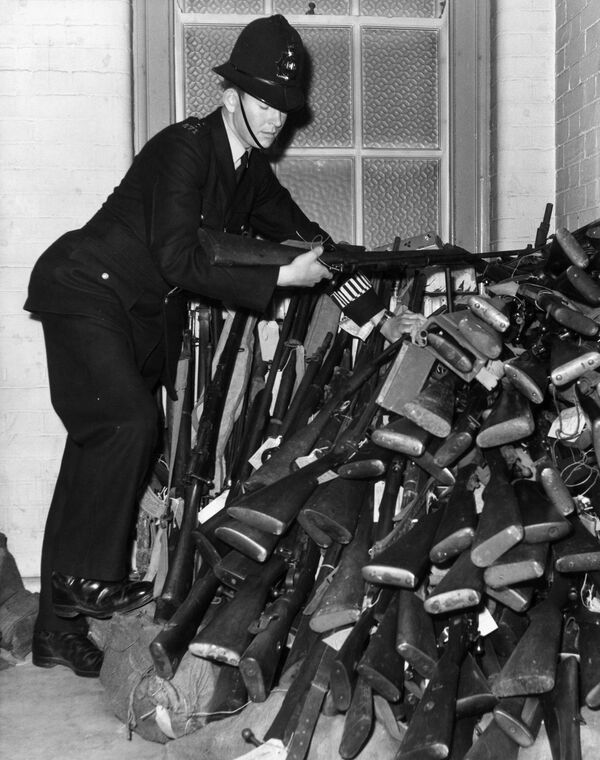 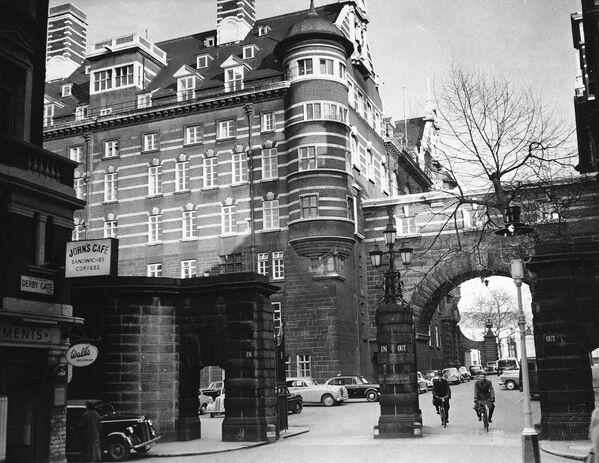 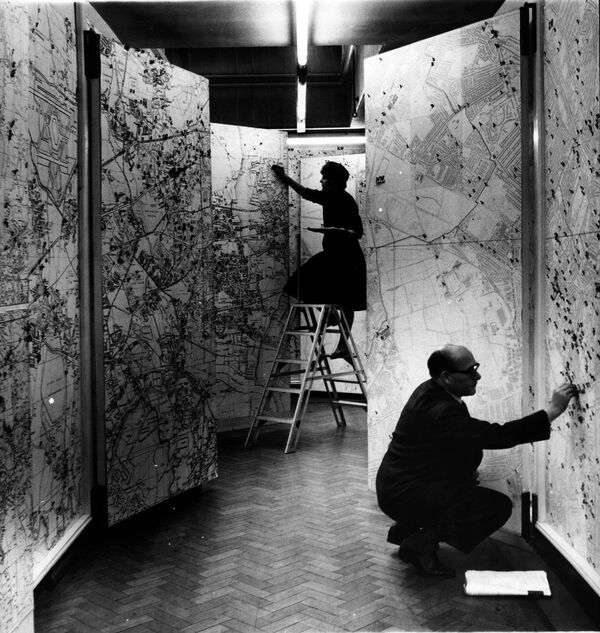 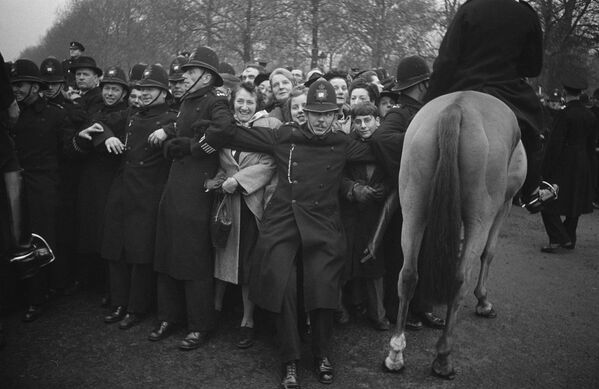 November 20, 1947. Police hold back a crowd outside Buckingham Palace during the wedding of Princess Elizabeth, the future Queen Elizabeth II, and Philip Mountbatten, Duke of Edinburgh.