The museum is closed Wednesdays, Thanksgiving and Christmas.

The Los Angeles County Museum of Art (LACMA) is one of the largest art museums in the United States. Its collection includes more than 100,000 works representing the development of art from ancient times to the twenty-first century, and its many exhibits and showrooms are visited by more than one million viewers annually.

The Los Angeles County Museum of Art was established as an independent cultural institution in 1961. It was formerly part of the city’s Museum of History, Science, and Art, which had been located near the University of Southern California since 1910.

In 1965, LACMA moved to the newly constructed complex of buildings on Wilshire Boulevard in downtown. Since then, it has steadily increased its exhibits and exhibition space with the construction of new buildings. In 1988, for example, the Japanese art pavilion, designed by architect Bruce Goff, was opened.

A beautiful garden is laid out near the museum; it is decorated with bronze statues by Auguste Rodin. The lantern columns by sculptor Robert Graham are also part of the LACMA grounds.

The museum is governed by a board of trustees, determining its overall direction. To join this body, an initial contribution of $100,000 must be made. The same amount must be paid annually. All monies received are spent on the purchase of new exhibits, charity and various needs of the museum. The current board has fifty members, including Barbra Streisand, Brighton Grazer, Michael Linton, Daria Zhukova and other famous people.

In 2004, the board decided on a complete renovation of the museum, which is to take place in several stages. First and foremost, the redevelopment is aimed at acquiring new comfortable spaces for exhibitions, housing collections, as well as administrative offices, restaurants, stores, and rooms for educational programs and film screenings.

The museum’s collection is strikingly diverse, featuring ancient Egyptian, ancient Greek and Roman, Islamic, African, Japanese and Asian art, as well as photographs, graphics, costumes and much, much more.

The foundational collections include an extensive collection of European painting and sculpture, which includes works created from the twelfth to the early twentieth century. Its masterpieces include Georges de La Tour’s Mary Magdalene with the Smoking Flame, Rembrandt’s Harmens van Rijn’s Resurrection of Lazarus, and Edgar Degas’ Sisters Belles and (Giulia and Giovanna Belles). Edgar Degas. Works by Pablo Picasso, Henri Matisse, Henry Moore, Paul Klee, Juan Miró, Alberto Giacometti and other 20th-century masters can be found in the section devoted to contemporary art.

A special place in the museum is occupied by works from the collection of American and Latin American art. LACMA is proud of its Decorative Arts and Design collection, which showcases the development of crafts in both Europe and the United States and includes over 350 priceless pieces.

The museum’s exhibition activities are staggering in scope and grandeur. Some of the best exhibitions include “Tutankhamun and the Golden Age of the Pharaohs,” “Masterpieces by Vincent Van Gogh from his Museum in Amsterdam,” “French Impressionists,” “The Modern West: American Landscapes, 1890-1950,” “In Wonderland: Surrealist Adventures of Women Artists in Mexico and the United States,” “Children of the Feathered Serpent: The Heritage of Quetzalcoatl in Ancient Mexico.”

LACMA also hosts book launches, artist meetings, workshops and more. In 2011, it announced a partnership with the Academy of Motion Picture Arts and Sciences, which should result in the opening of a film museum. Here regularly, almost every week, there are screenings of films of different directions. In addition, the museum organizes jazz music concerts, educational and entertainment events for viewers of all ages.

This vessel, originating in Central Iran, is the earliest example of pottery in the collection of the Los Angeles County Museum of Art. It was discovered in the 1950s during excavations of a late fifth millennium BC settlement near the village of Ismailbad.

The piece is beautifully preserved and has a simple shape typical of the ceramics of the region. The decorative motifs decorating the upper part are stylized images of goats enclosed in squares, which in turn are framed by a geometric ornament consisting of parallel strokes.

Osiris is the main god of ancient Egypt, his name appears in almost all myths, allegories and legends of the country. He is the eldest son of the earth god Geb and the sky goddess Nut, who was married to his sister, the fertility goddess Isis. Osiris was originally the god of the life-giving forces of nature, later the king of the afterlife.

The Egyptians depicted him as a mummy with crossed arms on his chest, which were the attributes of power. In some cases the god was represented with a bull’s head, as people believed he often reincarnated as Apis the bull. As a rule (especially in frescoes) the face and body of Osiris were painted in green. Sculptural images of the god were placed in the tombs as a symbol of the coming resurrection.

The statuette in the museum collection represents Osiris in the high crown of the pharaoh of Upper Egypt, with a false beard. The attributes he was holding have not survived.

The first reason everyone goes to the Los Angeles Museum of Art is to take a photo next to the white lanterns located right at the main entrance of the museum.

However, LACMA, among other things, is the central contemporary art museum in the city. 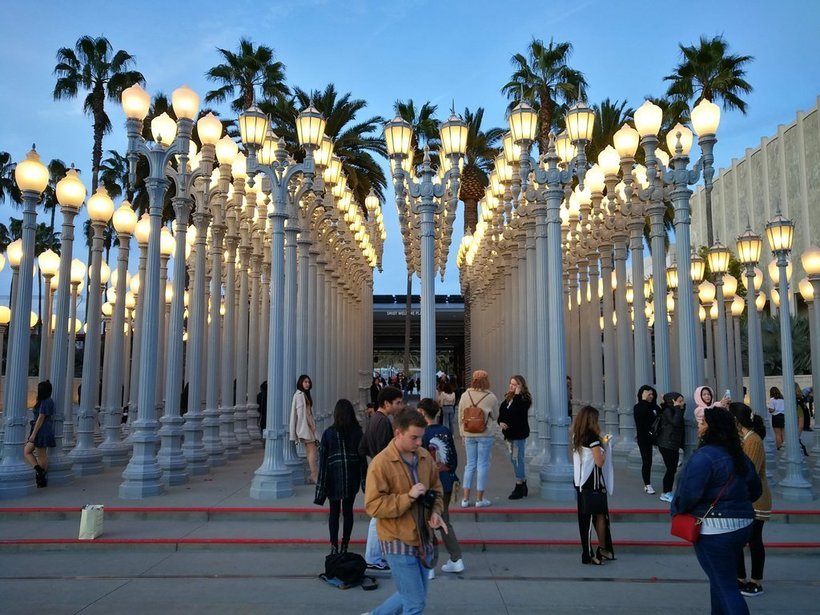 I always repeat that if you are in town as a tourist, you should go to all the museums on weekdays. That way you avoid the crowds and the lines. In Los Angeles, though, except for the well known tourist spots, there are generally not many people on the streets.

By the way, the museum shares the grounds with La Brea Ranch, an excavation site where the remains of extinct animals such as mammoths and saber-toothed cats have been discovered. You can check it out the day you visit the museum.

No museum tickets were required to visit the lanterns and the sculpture.

The museum is divided into several pavilions.

Is it worth going?

Even if you’re not an art lover, I still suggest visiting the museum grounds if you find yourself in the area (the famous The Grove Mall and Farmer’s Market are nearby). If only to take a photo with the lanterns in front of the museum, because it’s as cherished for tourists as a photo with the Hollywood sign.