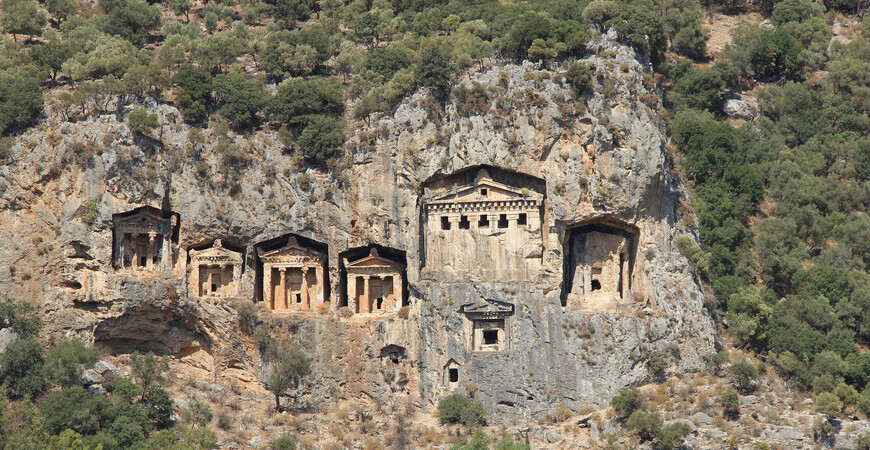 Rock tombs of Lycian kings in Turkey are a unique type of burial and archaeological monuments from the 1st millennium BC. The sarcophagi carved out right in the mountains are very similar to temples and dwellings, which is why uninformed tourists often take them for ancient cities.

Lycian tombs appeared in the territory of modern Turkey during the heyday of the ancient state of Lycia. It is known that Lycian culture was on a high level: they constantly participated in battles, knew the alphabetical writing and absorbed the experience of other nations. In 546 B.C., Lycia was part of the Persian Empire, later became part of Alexander the Great’s Empire, then belonged to Ptolemaic Egypt, after the Roman Republic, the Byzantine Empire and finally in the XI century was ruled by the Muslims.

History of the Lycian tombs

Kings, aristocrats and even ordinary citizens of Lycia were buried in rock tombs, which have reached us in a looted and dilapidated state.

This unusual form of burial clearly reflects the beliefs of ancient people about the afterlife. They believed that the souls of the dead turn into winged creatures (sirens) and ascend to heaven, because the higher is the grave, the easier it is for the soul to escape. Although no remains have been found in the necropolises, historians believe that the Lycians buried their relatives in a sitting or standing position, again guided by the idea that from such a position it was easier for the soul to ascend.

The carving of tombs in the rock also had a practical meaning: it was easier to carve rooms in the massif than to build them out of large stones. It also helped in warding off thieves who stole valuables from the crypts.

The design of the tomb depended on the financial means of the family of the deceased. The simplest tombs were made in the form of small hollows in the rock, covering the entrance with stones. For kings and aristocrats carved necropolises similar to temples and palaces, they still impress viewers with their grandeur. Weapons, coins, gold jewelry, household items, food and other things which, according to the Lycians, would be useful in the afterlife were placed in the tomb together with the deceased. After the ceremony, the entrance to the tomb was closed with a massive door or a large stone.

READ
The Acropolis of Athens in Greece, photo and description

Unfortunately, the tradition of putting valuables in the tomb attracted looters. In the Middle Ages, left unattended, the Lycian tombs were looted and have survived until today, empty and without doors.

The last tombs in Dalyan date from the Roman era. In the vicinity of the Turkish town there are 9 large tombs, designed as ancient temples and a dozen caves. One of the tombs stands out clearly from the others. There is a legend that Alexander of Macedon was buried there, but there is no evidence.

Excursions to the Lycian tombs in Dalyan

Since it is forbidden to approach the Lycian tombs, tourists are limited to viewing the rocky necropolis from the opposite bank of the Dalyan River or from a boat during a boat trip. The boat trip is the most popular attraction for visitors to Dalyan: besides viewing the tombs, it includes a visit to Iztuzu Turtle Beach.

The ancient city of Kaunos

Most often tourists are shown only the Tombs of King Kaunos, the ruler of the port city of ancient Caria. They are located a few kilometers from modern Dalyan, in the province of Mugla. However, further south there is an entire archaeological complex known as the Ancient City of Kaunos. Researchers have uncovered here the Heraklion Fortification, an ancient theater with an audience of 5000, a palestra with Roman baths, six temples and fragments of Hellenistic and Roman buildings.

It is difficult to get to Kaunos by land, so it is better to know the rules beforehand and arrange a boat trip.

Lycian tombs in other cities in Turkey

In addition to Dalyan, there are large funerary complexes in Fethiye and Demre. In Fethiye, the landmark is known as the Tomb of Amintas . It has an impressive scale – about 12 meters in height.

Perhaps the most impressive are the Lycian tombs in the ancient city of Demre Mira . In addition to the grandiose burial complex in Demre, the ancient amphitheater and the Church of St. Nicholas have been preserved.

Please note that there is a charge to visit the town of Kaunos and the Lycian tombs (where access is permitted). When purchasing a tour in advance, please verify whether the tickets are included in the price.

You can see the ancient tombs in Dalyan throughout the year: from April to October the water rides are from 09:00 to 19:00, from November to March until 17:00.

If you are in Dalyan, you don’t need to buy a tour to see the Lycian tombs. They are clearly visible from the opposite bank of the Dalyan River. There are several spots on the waterfront with good views – at the Monument of the Turtle, from the outdoor terraces of local cafes.

View of the tombs from the terrace of the cafe: google panorama

Public transportation in Dalyan is poorly developed, but the town is small and it’s easy to walk to the site. From other localities in Turkey, the best way to get there is by car, your own or a rented one.

The Lycian Rock Tombs in Dalyan, Fethiye and Mir (Turkey)

According to ancient Greek myth, the goddess Leto, who gave birth to Apollo and Artemis in a mountainous region in southeast Asia Minor, gave her the name Lycia in memory of the wolves that guarded her.

The Lydia was an ancient country in the south of Asia Minor that was located in the territory of the modern Turkish provinces of Mugla and Antalya. In the 1st millennium BC, Lycia was inhabited by the Lycians, descendants of the Luvians who, before assimilation by the Greeks, spoke one of the Hitto-Luvian languages and used alphabetic writing. From the middle of the 6th century B.C., Lycia was under the Persian rule (the east part of Lycia was ruled by the Lycian King Pericles in the 4th century B.C.). At the end of the 4th century B.C. Lycia was a part of the power of Alexander the Great. From 295 to 197 BC it was under the rule of the Ptolemies. In 197 BC, Lycia became one of the Seleucid domains. Later many cities of the region united in the Lycian Union. In the first century BC, Lycia was part of the Roman Empire as an autonomous state. In 43 AD, Emperor Claudius formed a Roman province on the territory of Lycia and Pamphylia. The Lycians occupied the valley of the Xanthus River, as well as the surrounding territories, up to about 50 km upstream, and from the mouth along the coast of the Mediterranean Sea. The largest city of Lycia was Xanthos, located on the Xanthus River, 7 km from the sea. After the temporary freedom under Nero, Lycia was permanently deprived of its autonomy. Theodosius separated it from Pamphylia, with Mira as the capital of the region. After 395, Lycia was tied to the Byzantine Empire, and from the 11th century it came under Muslim rule.

Of all the cultural heritage of the Lycians, the tombs are particularly well preserved. The Lycians believed that the souls of deceased people migrated from the tombs and turned into winged siren-like creatures. That is why the Lycian tombs were often located on the mountainsides or rocky slopes along the coast. More than a thousand tombs have been discovered in what was then Lycia, the most common of which are tombs carved into the rocks.

Sometimes the Lycian tombs are examples of a Greek, specifically Ionic style, sometimes imitating the wooden buildings typical of Lycia; the statues are all imbued with the spirit of true Greek art (http://ru.wikipedia.org).

The oldest and rarest form of funerary monuments is the Lycian tombs with columns. These tombs were usually the graves of famous people. They were usually a monolithic slab, pointed upward, which stood either on a stepped base or on a mountain. A Lycian tomb often consisted of two rooms, one of which was carved at the top of the tomb and was square in shape. The stone slab representing the lid had various shapes and the upper room was decorated with reliefs. The most common form of burial was the Lycian sarcophagi, which were gigantic in size. They consisted of several parts: a burial chamber, a base and a lid topped with a crest. Often the sarcophagi were decorated with reliefs. Scholars place most of the surviving tombs in the Roman era. They were generally simpler and smaller than their older predecessors ( http://www.fantasy-travel.ru )

In the 6th and 4th centuries BC, rock tombs were built in Lycia with porticoes repeating elements of the wooden structure in stone. Some of the columns of the Lycian tombs are considered prototypes of the Ionic order in architecture. At Tris, Lycia, the ruins of Hera (temple of Hera) were discovered. Like the more famous Monument of the Nereids at Xanthus, the Lycian Heraion, created in the Hellenistic period, is a combination of a temple and a tomb monument to a ruler. Its architecture is a fanciful mix of Greek and Oriental traditions. The high fence had a gate decorated with reliefs of winged bulls. Inside there was a sarcophagus. The frieze along the perimeter of the enclosure has painted limestone reliefs showing dancers and musicians and episodes of Greek mythology (Yandex Dictionary ‘ Dictionary of Fine Arts. – 2004-2009)