Salt mining near Solikamsk has a long history. It was evaporated from the springs back in the times of Rodanovsky culture (since the IX century). And at the beginning of the XV century the Kalinnikov brothers, mansions from Vologda, founded saltworks near the present village of Verh-Borovaya. In 1430 they moved them to the neighborhood of today’s Solikamsk, because the brine was richer there.

With the arrival of the Russians brine began to be extracted from the wells, which were called pipes. Initially, the brine was lifted by small buckets (this process is depicted on the coat of arms of Solikamsk), then used a rod pump to place the rods over the mouths of pipes installed quadrangular log cabin brine lifting tower. Initially the pump was driven by horses, but since the 19th century steam engine was used. Then the raised brine was stored for some time in the salt stalls and evaporated in the brine jars.

How were brine wells made? Firstly, there was dug a small hole and matitsa or matichnaya pipe was installed in it which had inner diameter of 40-50 cm, wall thickness of about 10 cm and length of up to 24 meters. It was made of thick pine logs. Further drilling was carried out with the percussive-turning method. First the casing and then the paddle pipes were lowered into them. The lowest interval was not cased – there gathered brine. It was not easy to sink wells and, as a rule, they took several years to complete. It was the most expensive element of salt production (http://m-der.ru/).

The depth of the wells usually did not exceed 100 meters. Brine was extracted by leaching interlayers of rock salt in the Lower Permian saline sediments – the so-called transitional pack of salt and marl formation (Solikamsk Formation of the Ufa Stage) and from the rock salt blanket (Berezniki Formation of the Kungurian Stage).

Salting in Solikamsk developed quite successfully, although since the 17th century, the main volume of salt produced in Usolye and the surrounding area (Lenva, Dedyukhin). Over time there was some decline in production. In 1818 in Solikamsk there are no working jams at all. But after a while salt production was restored again. In Solikamsk there were 2 saltworks – Georgievsky and Troitsky (belonged to the well-known Ryazantsev family). Only old photos remained from the first one, and from the second one the most famous brine extraction well – Lyudmilinskaya. 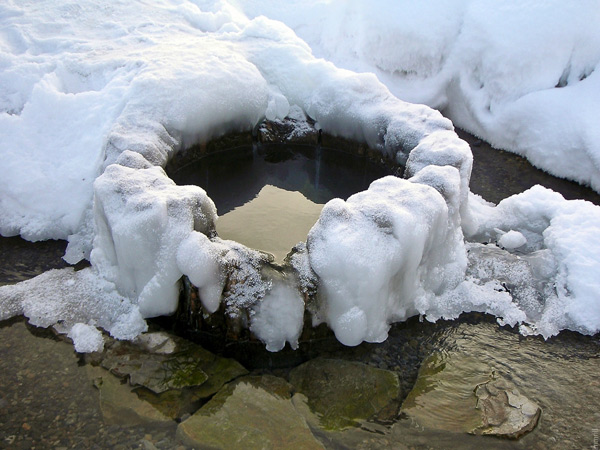 It was drilled in 1906 and named in honor of the wife of the then owner of Troitsk Salt Plant I.V. Ryazantsev. It is interesting because during its sinking at a depth of 97.9 m salt with red interlayers was found. In 1907 when digging the Petrovskaya pipe (located 320 meters to the south of Lyudmilinskaya pipe) at a depth of 92.9 meters red salt was found (Kudryashov, 2001). In 1910, a large amount of potassium chloride was found in these samples. All this prompted the discovery in 1925 by geologist P.I. Preobrazhensky of the Verkhnekamskoe deposit of potassium salts.

Here is its section from the article of A.N. Ryabinin “On the geological conditions of potassium salts in the Solikamsk region, Perm province” (1918) 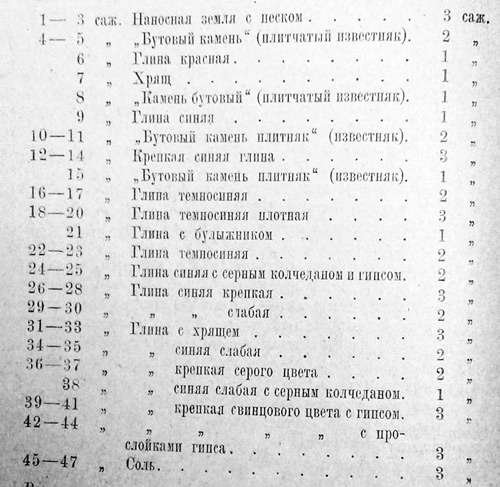 After the revolution the Troitsk Salt Plant was nationalized and placed under the control of the “Permsol” trust, but due to the depreciation of the equipment the plant was closed in 1924. Apparently, at the same time all the factory buildings were demolished. Obviously, by the time the plant was liquidated the only active well was Lyudmilinskaya, which explains its preservation.

And not for nothing it is one of the symbols of Solikamsk today – because it is a living part of the town history. Thanks to the salting activity Solikamsk appeared. It is important that in the samples from this well chemical analysis for the first time proved the presence of potassium in the Upper Kama salt. It can be said that the giant Uralkali ore management facilities grew out of this small borehole.

I visited it this winter, but before that I couldn’t get there. Surprisingly, even at this time of year the trail to it is not overgrown. The water in the well is really salty, you can smell hydrogen sulfide all around. They say that people even bathe in it. 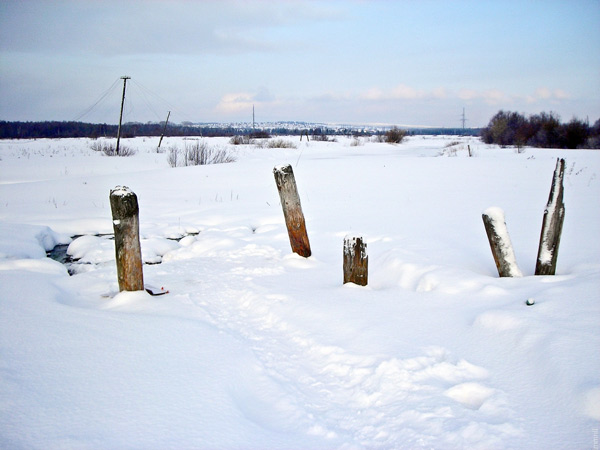 General view. You can see the strange logs, probably the remains of a decorative structure. 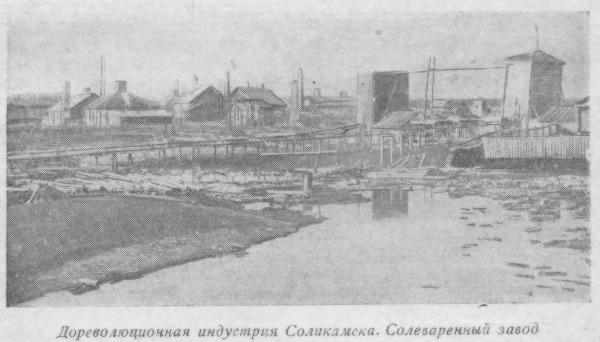 And 100 years ago this place looked different. Photo from the magazine “Potassium”. 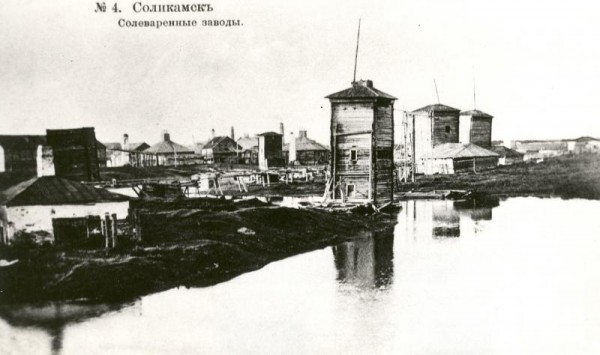 Photo from the Internet. 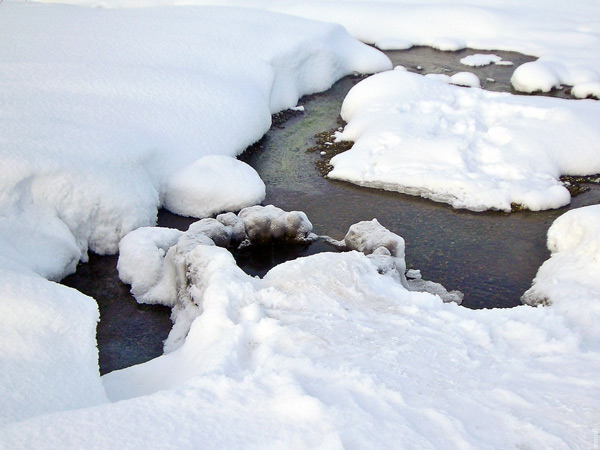 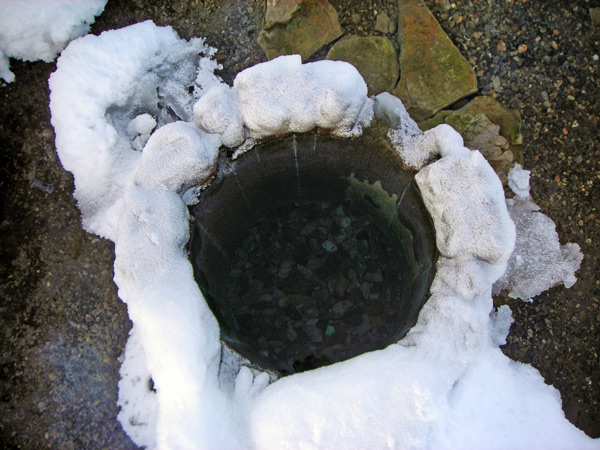 Matitsa. The well itself is plugged with sand and gravel mixture.

And this is a section of the brine tube and tower from http://m-der.ru/. 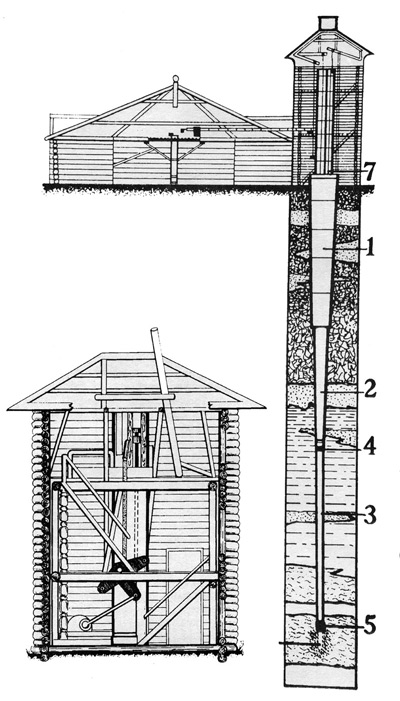 Casing pipes 3. paddle pipes 4. blockage at the lower end of the casing to prevent the ingress of groundwater 5. the lower part of the paddle pipes 6. the brine tank 7. the machine pipes to lift the brine by the piston pump

Why one of the symbols of Solikamsk is the Lyudmilinskaya well

Ludmilinskaya salt cave is an industrial site of the early XX century in Solikamsk, which has now become a landmark of the city.

The Ludmilinskaya salt well is one of the landmarks of Solikamsk and, perhaps, the main symbol of this Ural town. Solikamsk is located in the northern part of the Perm Territory, 185 km north of the regional capital. The name of the town is connected with the salt mines, which were organized by Vologda merchants back in the 15th century.

The Ludmilinskaya salt well is located on the bank of the Usolka river near the historical center of Solikamsk in the northeastern direction from the town’s Sobornaya Square. The exact location – the intersection of Herzen Street and the Usolka River embankment. The nearest landmarks – located near the Cultural and leisure center and the Palace of Sports “Kaliyets”.

How to get there from Ludmilino well

Solikamsk airport hasn’t been accepting aircraft for a long time, so travelers have only two ways to get to the city: by motor transport or use railroad transportation.

Solikamsk has no direct railway connection to Perm, but you can get here without a change from Ekaterinburg.

From the railway station of Solikamsk to the salt well you can get by buses #11, #11U, #20, #22, #24, #27. The necessary stop – “Sberkassa” in the street 20 years of Victory. From the stop you should move along Herzen street in the direction of Usolka Embankment, where the well is located.

It is rational to start the trip by private car from Perm. The distance between the two cities by road is about 212 km. You need to leave Perm on the Eastern bypass, which turns into the Solikamsk tract. The travel time is about 3 hours and 30 minutes. After the arrival to the city you should go along the street 20 years of Victory till the crossing with Gertsen street, then turn to the last one and go to Usolka River Embankment.

From Perm you can also get to Solikamsk by intercity bus. The cities are connected by a direct route Perm – Solikamsk, you can also get to your destination by passing buses Perm – Krasnovishersk and Perm – Nyrob. Frequency of buses – about once every half hour, the beginning of movement – at 06:25, the end – at 20:00. Estimated travel time – from 3 hours 45 minutes to 4 hours 30 minutes.

READ
How much alcohol costs in Thailand

Buses arrive to Solikamsk bus station from which you have to walk 250 meters in the south direction to the bus stop “Center” at 20 years of Victory street. Then you should take one of the buses and drive to “Sberkassa” stop.

The history of the well.

For a long time Solikamsk was the leader of salt-mining industry in Russia, but by the middle of the 19th century the industry fell into decay. Modernization of the industry demanded the construction of new plants, one of which was Troitsk salt plant of I.Ryazantsev.

In 1906 the factory worker N. Ryazantsev was commissioned to drill a well on the territory of the plant to determine the depth of occurrence of salt layers. The salt found at a depth of nearly 100 meters was not suitable for food, so the salt samples were sent for analysis to determine the exact chemical composition. The result showed that the salt samples had elevated levels of potassium chloride.

In 1910 the drilling was completed and the well was equipped with a pump. The borehole was named Ludmila after the wife of the plant owner Ludmila. The extracted salt after boiling gave out brine of 24% strength and was used in industrial needs.

The life of the well was not long – immediately after the revolution, Trinity plant was still working, and in 1923 it was closed due to the impossibility of complete reconstruction. The buildings of the plant were demolished, the only thing that now reminds of the once working enterprise is the Lyudmila well.

However, the well itself was not abandoned. In 1925, a new analysis of salt samples from the well discovered sylvinite in the rock – a raw material for the production of potassium fertilizers. Further research led to the discovery of the largest deposit of potassium-magnesium salts on the Upper Kama. It turned out that Solikamsk is literally located on the surface of the deposit, its size is 140 by 60 kilometers. It is from this small well that the largest industrial area of the Upper Kama, the leaders of which are nowadays such giant companies as Uralkali and Silvinit, originated.

Nowadays the only thing left of the full-fledged salt well is a matte pipe made of thick pine logs with an inner diameter of 50 cm. The 12-meter high brine tower, which towered over the well, has long been lost. The Lyudmila well remains active – water continues to flow to its surface. For safety purposes, the well was plugged with sand-gravel mixture.

A few years ago, the area around the well was landscaped to facilitate tourist access. A small parking lot was arranged, a small wooden sculpture of a mermaid was installed in front of the well, and the space around the hole was equipped with wooden sidewalks. The importance of the potash industry for Solikamsk made it possible to turn the Ludmilinskaya borehole into a real symbol of the city.

Those who wish can taste the hydrogen sulfide-scented water or even bathe in it. Locals say that the water from the well, enriched with potassium salts, is beneficial to their health, so many people decide to take a swim in it. The good thing is that the water in the well does not freeze all year round, and access to the well is open 24 hours a day.

Of course, the Lyudmila salt well outwardly is not particularly impressive and looks more like an ordinary technical well. However, if you know that the hole goes into the ground for 100 meters, and it is from this modest well a powerful industry originates, it becomes clear the importance of this monument for Solikamsk and the whole Upper Kama region.