Mactan Island – the nearest island to Cebu, located opposite the city of Cebu, separated from the main island by a strait width of less than a kilometer at the narrowest point (Mactan on the map ). Refers to the province of Cebu, and is one of its most popular and developed resorts. Here is the main and only in the province international airport Mactan Cebu, through which tourists arrive in this part of the country. Mactan Island is often referred to as the city of Lapu-Lapu, but in fact, Lapu-Lapu is one of the island’s cities and its capital.

Despite its popularity, Mactan is a controversial resort with its own characteristics. It is not a natural paradise, as commercial guidebooks say, but a concrete and road-cut island, almost a megalopolis. Although it is quieter than Cebu City, step outside the hotels or the resort area along the southeastern shore and you are greeted by filthy streets with poor people and beggars, congested roads, exhaust fumes, and the stench of the many local cafes. All descriptions of the resort on commercial guidebook sites, as a paradise island with pristine nature and pristine “bounty” beaches – complete nonsense. Well, another point that tourists from European countries do not always like – a large number of Asian tourists from Korea, China, Hong Kong and other Asian countries, with their usual manner of rest and move in large and very noisy groups.

Recreation on Mactan – the beaches and diving. All the beaches here with coarse yellow sand mixed with fragments of coral and shells. What’s good, the beach is protected from the waves by neighboring islands. But there are not many beaches on Mactan: almost all the coast here is stony, or destroyed and polluted by human activity. What remains belongs to the expensive resorts with their own territory and artificial beaches, the access to which from the outside is blocked completely, or is possible for a fee, and not a small one.

And the remaining few public beaches are always crowded with locals and not very clean, so if you need a budget beach holiday, you should look for other places, such as going to Moalboal or the neighboring islands of Panglao, Bantayan, Malapaskua, etc.

But what Mactan can really surprise is the very rich underwater life, which makes it one of the most popular places for diving. Prices for diving are low, from 1100 pesos ( 1167.45 rubles), and for only 250 dollars you can take a training course. Therefore, the island of Nerekdo is used as a starting point for 3-4 days to get a basic certificate, and then go to the other, more interesting islands in the Philippines.

In general, summing up, it is a well-developed resort for beach holidays and diving, but it will suit you only if you are willing to shell out a considerable sum for the accommodation in a comfortable hotel with its own beach. Otherwise, it is not worth to stay here for a long time, for a budget holiday, it is not suitable at all. 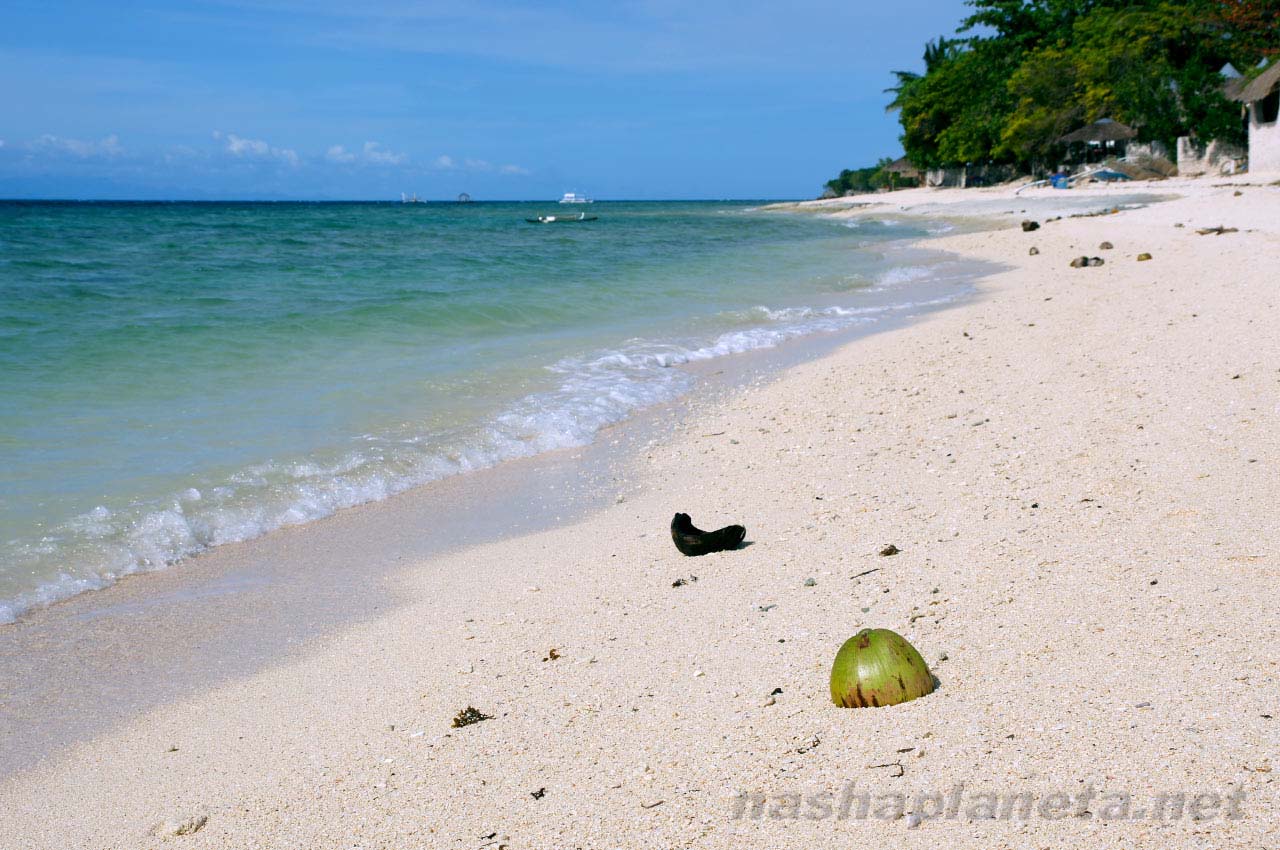 As we mentioned before, the beaches on Mactan are mostly owned by hotels, although this is illegal. They build up areas around the beaches and restrict passageways, so it’s just impossible to get onto them. Some hotels allow passage for a fee: that is, you kind of pay for the service (dinner at the restaurant, rent a gazebo or deckchair), and then you get the right to go to the beach. Free beaches are few, they are always crowded with local holidaymakers, not very clean and comfortable for recreation and bathing sophisticated tourists. Here are for reference the most popular paid and free beaches:

If you’ve decided on a beach and a place to stay, you can find and book a hotel in Mactan on these sites, or through Agoda’s search form:

Warning. Systems Booking.com, Agoda, AirBnB, Trivago and other foreign sites showed themselves as extremely unreliable partners and completely closed the possibility of booking hotels and accommodations on the territory of Russia, including with financial losses for Russian citizens. If you need to book accommodation without consequences we advise you to use Russian search and reservation systems for accommodation and hotels and avoid using Booking.com, Agoda etc. Read more here. 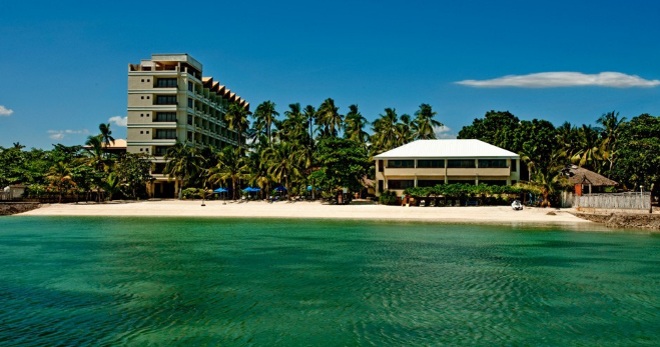 Mactan is small but one of the most popular islands in the Philippines: it’s famous for its dive sites, beaches and excellent hotels. Every year it is visited by many lovers of passive and active sea vacations.

To find Mactan on a map, you first need to find Cebu, which is actually not difficult: this narrow and long island is nestled in the heart of the Philippines. Next to its east coast, opposite the capital city of Cebu (which is almost in the middle of the coast) is Mactan.

Administratively, Mactan consists of 2 parts: the town of Lapu-Lapu, which occupies most of the island (about 58 square kilometers), and the municipality of Cordoba. The settlement of Lapu-Lapu was founded in 1730, and received city status in 1961.

The island covers an area of 65 sq. km. and is home to about 470,000 people. The inhabitants are engaged in tourism business and agriculture. Besides, the island is home to several fairly large industries that are some of the most successful industrial enterprises in the Philippines. Many of them are located in the Mactan Export Processing Zone (MEPZ), a duty-free industrial zone opened in 1979, which includes more than 35 commercial enterprises, about 50% of which are Japanese-owned. Factories manufacturing high-end furniture, guitars and other wooden instruments are well known outside the Philippines. 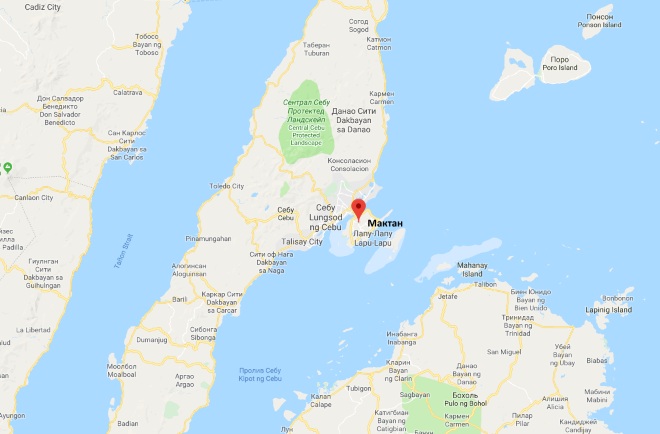 Like Cebu, Mactan has a tropical climate. The dry and rainy seasons are determined by the prevailing winds: from May to October, and sometimes until mid-November, the monsoon “habakat” from the Pacific Ocean brings to Mactan humid air, during which time the island receives tropical showers. At other times, dry Amihan winds prevail, and this is the best time to visit the island.

The average annual temperature on Mactan is +26 ° C, its seasonal variations are practically absent. The water temperature along the coast practically never drops below +24 ° C.

Mactan’s beaches are some of the best in the Philippines, because the island is geared specifically for tourists. The most attractive of them can be called:

All 3 beaches are chargeable, and the price also includes lunch/dinner at the beach restaurant. You can also take a boat to Pandanon Island, known for its white sand beaches and clear water, in less than an hour.

Mactan diving is considered one of the best in the Philippines. The most popular dive site is the Shangri-La Marine Reserve, located off the northeastern shore of Mactan. This site is suitable for beginners and experienced divers alike. Other popular sites are:

Most of the island’s attractions are its natural beauties. However, there are also a few cultural sites that are a must-see while vacationing here. These on Mactan Island include the monument to Magellan, most often depicted in the photo, along with a monument to the chief Lapu-Lapu and the excellent Mactan beaches. The fact is that it was here that the tribe led by Lapu-Lapu fought the Spanish invaders under the command of Magellan, and it was here that the famous navigator died at the hands of the natives (as commonly believed, just by the hands of the leader). The Philippines immortalized the memory of the first fighter for independence, and the navigator: Magellan’s monument stands on his grave, a statue of the leader – nearby. It is also worth visiting the marine reserves and the aquarium. 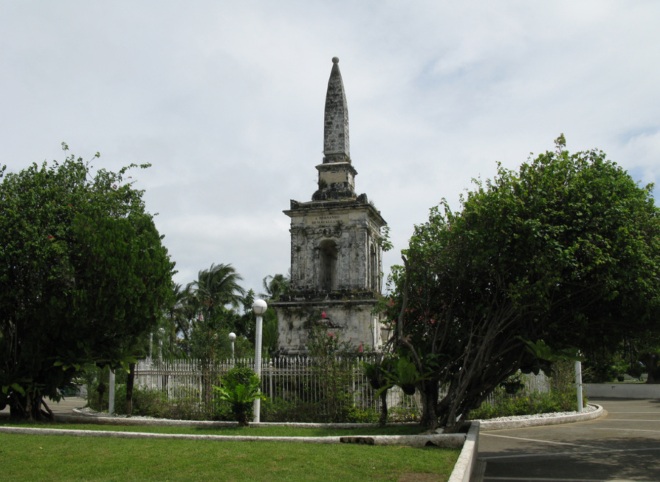 There are a lot of hotels on Mactan, which is not surprising: a large number of vacationers come here during the season. All hotels are located in Lapu-Lapu. The best in 2018 guests recognized:

Mactan is famous for its restaurants and cafes – it is believed that the best eating establishments of Cebu province are located here. The most fashionable restaurants are located near the airport. There are Filipino, Chinese, Japanese, Korean and European – Italian, Spanish and French – cuisines. Almost all can taste the freshest seafood.

The best among moderately priced restaurants in 2018 are:

Mactan does not offer a particularly memorable shopping experience. The best place to buy souvenirs is at Gaisano Capital Mactan, which is the largest shopping center on the island, or at Marina Mall, located near the airport. It is also worth visiting the park in Punta Engano – a large part of the souvenir stores are located here.

Tourists often take from the island guitars and other musical instruments made of wood, made here on the island. Also popular are other souvenirs made of this material, such as masks. 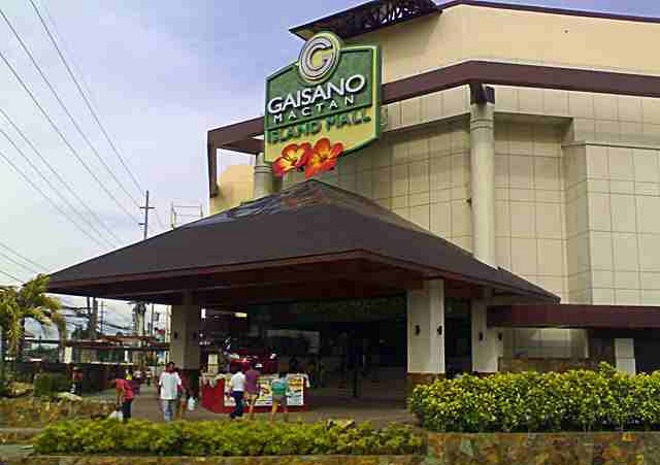 Transportation on the island

There are buses and jeepneys to Lapu-Lapu. To get out of it, you will have to rent a car or take a cab.

The island is home to Mactan Cebu Airport, the second busiest in the Philippines. You can fly here from the islands of Palawan, Boracay, Davao, etc., and of course, from Manila. The airport also accepts international flights. Vacationers on the neighboring island will be interested in how to get to Mactan from Cebu. Very simple: the islands are connected by bridges – Marcelo Fernand and Mactan-Mandaue (Osmeña).