Crossroads are quite normal in everyday life as far as roads are concerned. But there are intersections that look unrealistic, but exist nonetheless. One of these intersections (tongue is not rotated to say roads) is in Germany near the town of Magdeburg.

The intersection is not simple. One “road” is above the other. Surprised! – You will say. And you would be right, if it were not for one significant problem. On these roads move not cars, and not even steam locomotives and cars. The roadway is designed for … ships. Yes, it is the river boats that move on the upper and lower “road”. To make it clearer to you, take a look at this photo. 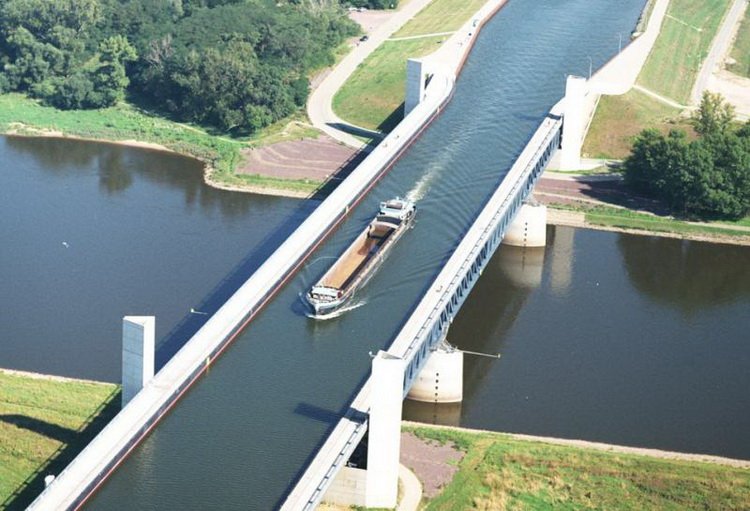 Agree, an interesting sight. The water bridge is located 13 kilometers north of Magdeburg and originates in the town of Hohenwart on the right bank of the Elbe.

Magdeburg Water Bridge on the map

Amazing bridge serves to connect the most important navigable canals in the region – Elbe-Hafel and Middle German Canal. The idea of creating such an interesting construction was dictated by German pragmatism. The industrial area called the Ruhr Valley was in great need of this crossing. Before that, to get from one canal to another, river ships made a loop of 12 kilometers. They had to go through the Rothenzee lock from the Middle German Canal, continue along the Elbe riverbed, and then through the Niegrippe lock into the Elbe-Hafel Canal. This was accompanied by a great loss of time needed to pass the locks. In addition, the heavily-loaded barges were heavily drafted, and navigating the Elbe was quite difficult. The ships had to be under-loaded. And it was a loss of money, which the Germans were good at counting. 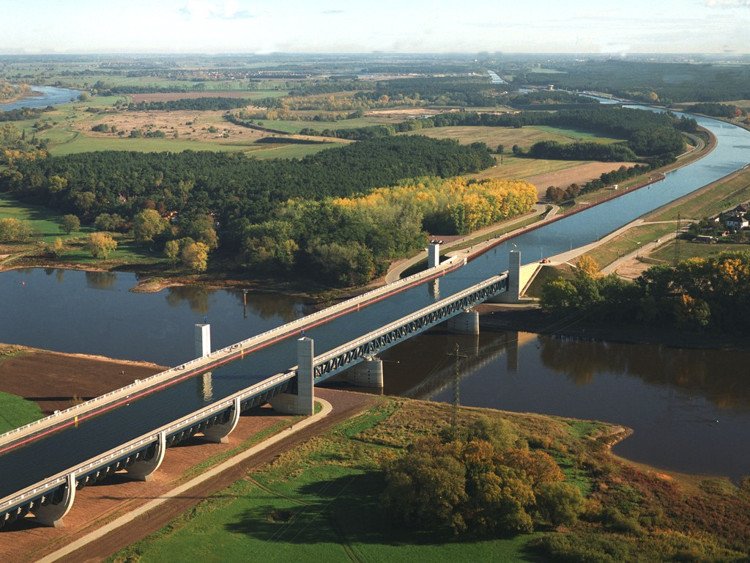 The idea for the bridge was born in 1919, but then World War I prevented it from being realized. Then, by 1938, the first piers of the bridge were built. But then the world was stirred by World War II, and construction stopped. After the war ended, Germany was divided into two parts. The construction was forgotten for decades. After the fall of the Berlin Wall and the reunification of Germany, plans to build the fancy crossing were brought back to life.

Construction only resumed in 1997 and was completed in 2003. Now the navigable bridge is an important link in the economy of the region. About 500,000 euros, 68 thousand cubic meters of concrete and 24 thousand tons of steel constructions were spent on the construction of the Magdeburg Bridge. The result was the most grandiose water bridge in Europe. 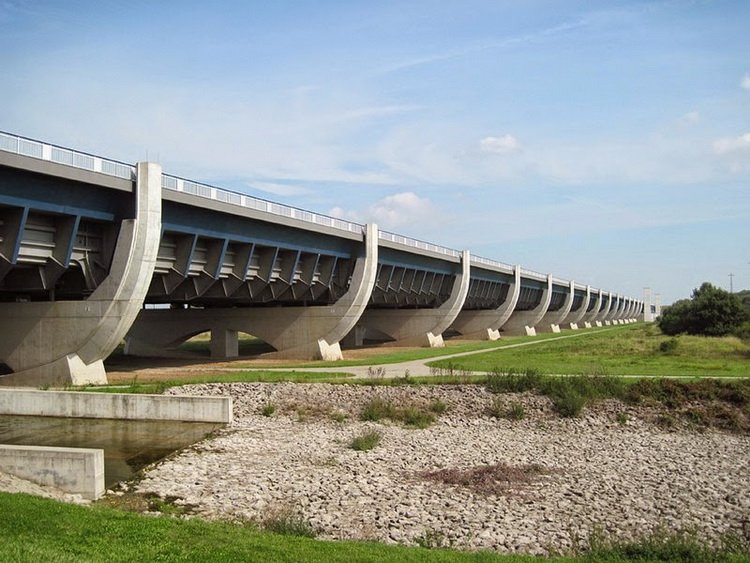 This is what a part of the bridge looks like above the land.

In addition to the water crossing, the bridge has pedestrian walkways, where hundreds of tourists can watch the barges rush past. 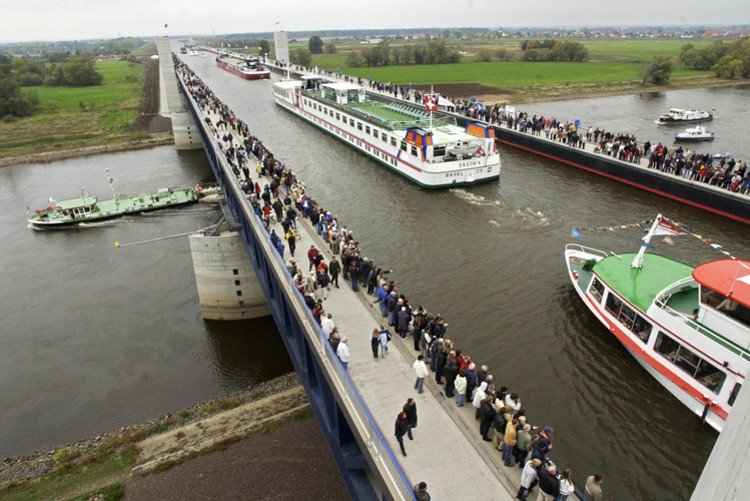 Magdeburg crossing: when the river flows over the river 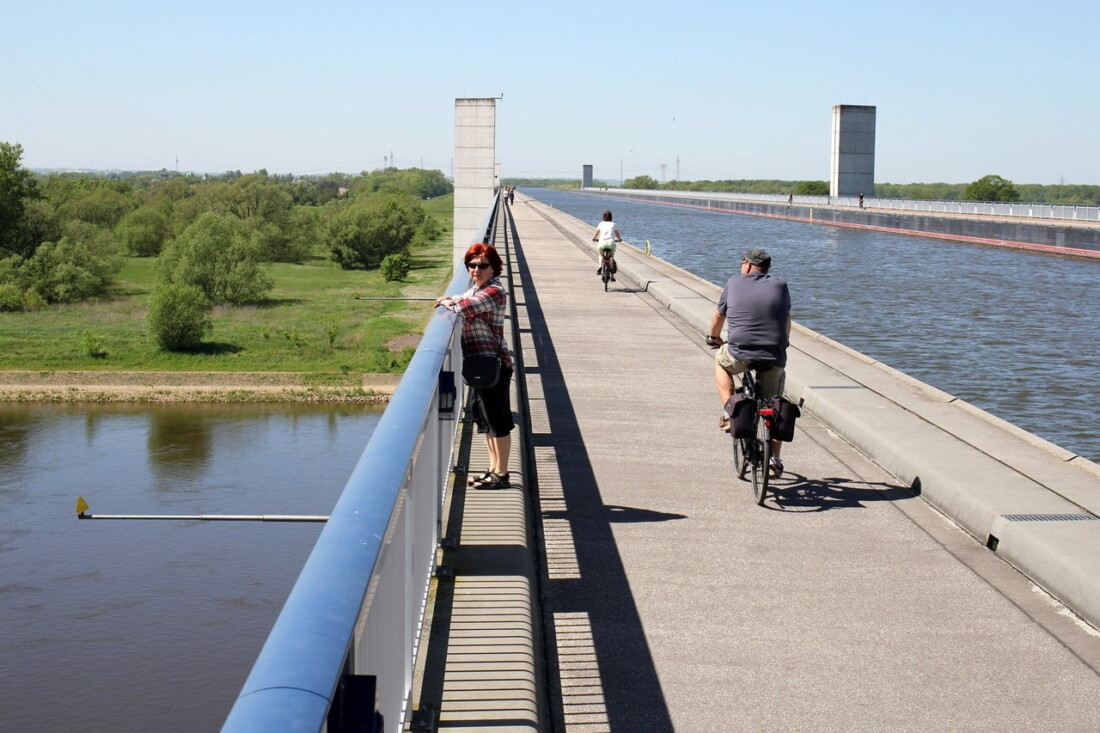 Magdeburg’s water crossing in Germany is an interesting engineering structure and recreational spot. It is an aqueduct over a river, on which ships sail. One river that has been flowing here for thousands of years is the Elbe. Across the Elbe over a bridge in a long metal trough flows another river called the Kanalbrücke.

The entire waterway is called the Wasserstraßenkreuz Magdeburg (Magdeburg Water Crossing), it connects the two canals, the Elbe-Hafel and the Middle German Canal. Before, in order to get from one canal to the other, the ship had to go down the Elbe River, walk 12 kilometers, and then come back up through the locks to the other canal.

After the Wasserstraßenkreuz Magdeburg was built, the fleet moved from one canal to the other over the water bridge over the old Elbe without delay. Magdeburg is 10 km from this water crossing and lies below the level of the bridge. The canal embankment offers a wonderful view of the surrounding countryside and the river valley.

The bridge was conceived and designed back in the 1930s, but was not built until after the reunification of Germany. Today it is a waterway on which barges with cargo and small vessels travel.

There are many shipping canals in Germany, and they have been built everywhere since the 17th century, when there were no autobahns, and the developing industry needed coal and ore to be delivered.

The development of industry stimulated engineering to create hydraulic structures: dams, locks and canals. And in the 20th century began to build navigable bridges as well. The Magdeburg Water Crossing is the most recent and largest water bridge in Germany.

The most important canals meet at Magdeburg’s water crossing are the Middle German Canal (it crosses rivers flowing into the North Sea) and the Dortmund – Ems, which together with the Ruhr Canals and the Elbe Bypass create a waterway from the southeast of Lower Saxony to Hamburg, and the Main-Danube.

There are about 6.8 thousand kilometers of inland waterways in Germany. Annual traffic volume is 230-260 million tons, and more than half is the interstate traffic. Today along the rivers and canals of Germany you can travel from the Black Sea to the North Sea and Baltic.

Wasserstraßenkreuz Magdeburg is very lively and popular not only with the sailors of the river fleet, but also with tourists.

You can get here by a white steamboat from the Weiße Flotte (White Fleet), right from the Magdeburg waterfront. Tourists ride the boat on the Elbe, look at and photograph this engineering marvel.

Bicycle tourists ride along the canal to the locks – here you can create a route of several tens of kilometers.

Hikers take the shortest routes. They walk along the embankment on one side of the canal, then cross under it and return on the other side. It is forbidden to swim in the canal, but on the Elbe near the bridge there are many pools where you can swim and sunbathe. There is free parking for motorists.

You can eat and relax in the restaurant next to the parking lot or in other catering establishments in the village.

How to get to Wasserstraßenkreuz Magdeburg

The dimensions of the bridge Kanalbrücke 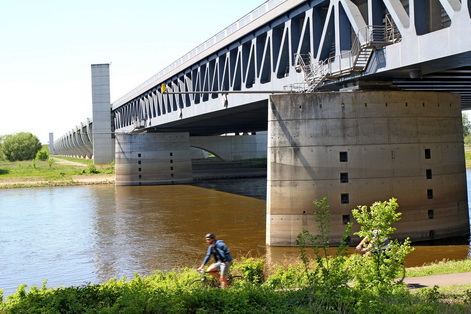 Above, in a metal trough, is the canal, and below is the Elbe. 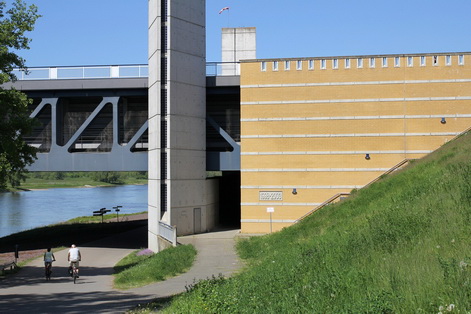 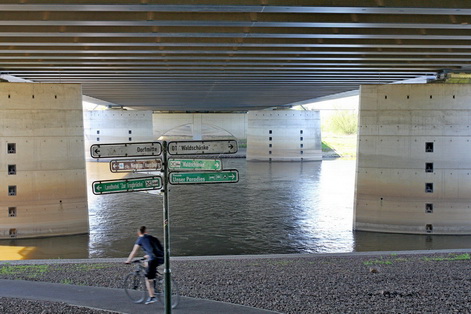 Traveling under the canal from one embankment to the other. 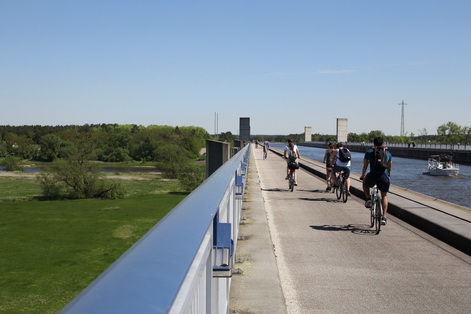 Bicycle lanes along the canal. 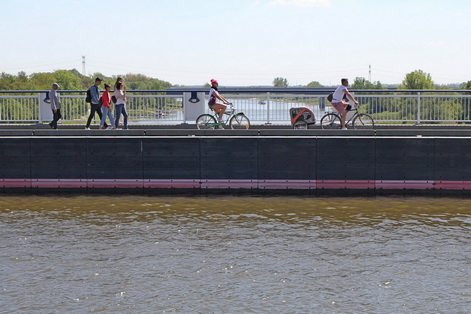 Pedestrians and cyclists crossing the Elbe. 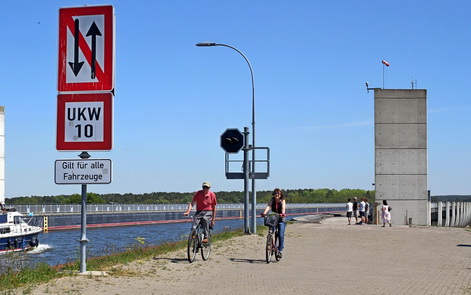 These are signs for ships in the canal, not cyclists. 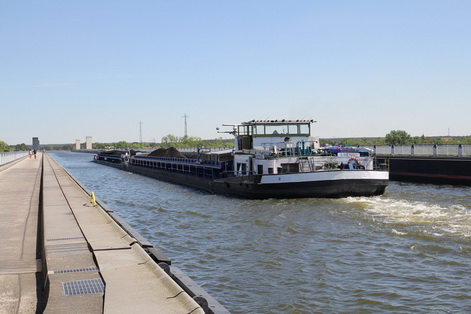 A barge laden with coal follows the canal from the Ruhr. 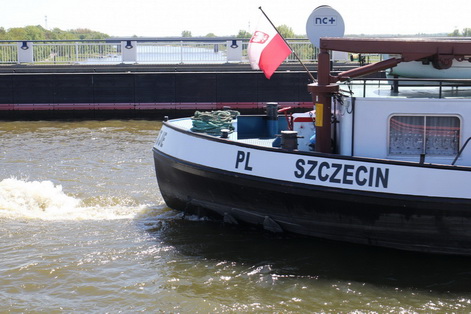 Polish barge from Szczecin with cargo in the canal. 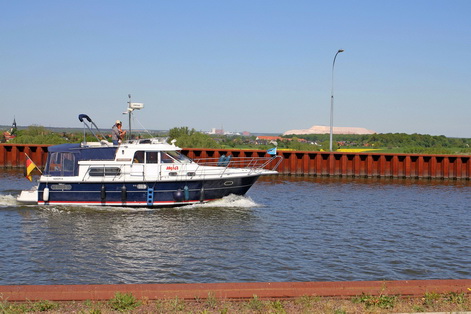 German yacht in the canal. In the distance you can see the quarry of the plant below the level of the canal. 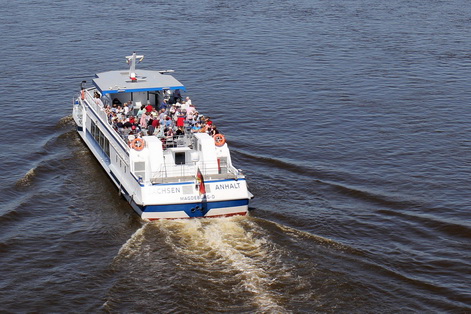 The Magdeburg White Flotilla boat with tourists passes under the canal bridge.