During the Great Geographic Discoveries many European countries acquired overseas territories and colonies. Some colonies later achieved independence, but there are some places that still remain “under the wing” (remember that phrase, it will be needed later) Europeans.

This is what happened to the island of St. Maarten. This small piece of land in the beautiful Caribbean Sea was divided between France and the Netherlands. And almost in half. The northern part of the island is owned by France, respectively, the southern part belongs to the Netherlands. The name of the island is pronounced slightly differently by the French and the Dutch. Saint-Martin for the French and Sint-Marten for the Dutch. Both mean “island of St. Martin”.

We will not touch the island itself, we will only pay attention to the part of it that belongs to the Netherlands, more precisely to the west coast of this part. Here is located one of the most dangerous airports on the planet and one of the most dangerous beaches in the world. It is Princess Juliana Airport and Maho Beach, which is right at the beginning of its runway.

It is Maho Beach that caught our (and not only our) attention. It is located, as we said, on the west side of the island, just north of the bay of Berjo.

Maho beach on the map

What is famous for Maho beach?

The beach itself as such is unlikely to evoke strong emotions. It is only 300 meters of sandy coast up to 20 meters wide.

But its southern half … will not cause any adrenaline until a giant passenger airliner like a Boeing 767 or Airbus A320 flies over your head at a height of just a couple of dozens of meters. And a plane can fly over the beach at any time of the day or night. As you can imagine, planes flying over the beach is not a tourist attraction at all. Flying over a small beach, the plane lands literally behind its fence. 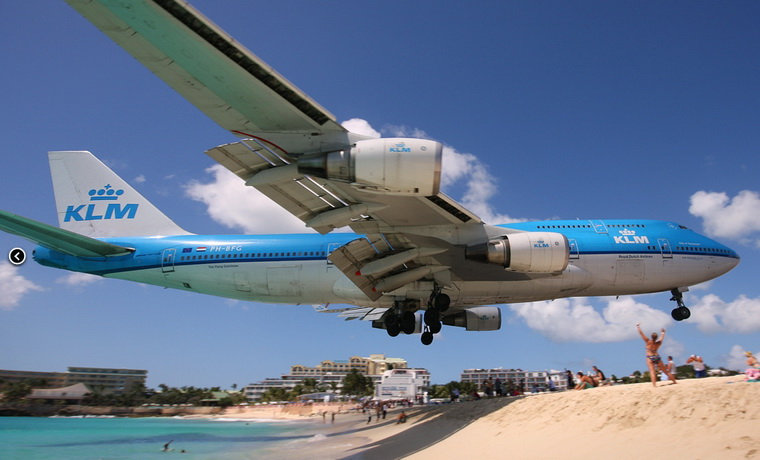 A plane comes in for a landing over Maho beach

The beach and the beginning of the landing strip are separated by a road and mesh fence. The airport just off the beach has a fairly limited runway of only 2,300 meters and ends at Simpson Lagoon. It is quite a short stretch for large aircraft. In addition, the runway is bounded to the north and east by the Simpson Lagoon and to the south by the bay of the same name as the lagoon.

It turns out to be such a narrow tie, surrounded by water, on which the plane has to land. It has to descend as much as possible in order to land at the very beginning of the strip. So the planes fly over the beach, almost clawing tourists’ heads with their landing gear, and that’s why the airport is considered extremely difficult to pilot. 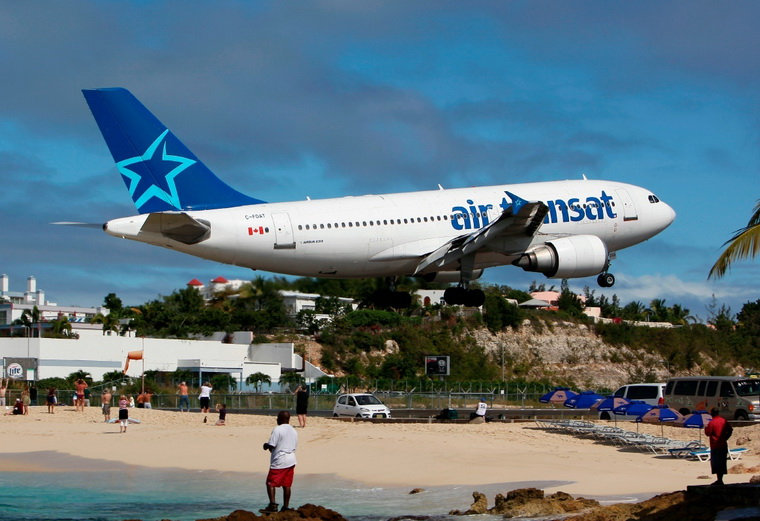 A Plane Flying Over Maho Beach

Naturally, seeing a plane land or take off over the beach, and practically at arm’s length is the dream of many extremists. They are also called spotters. They are people who like to watch planes. And the beach Maho is the best way to do it.

Here you can practically scratch the belly of a landing plane (well, if you jump well). Of course, this is a joke, the authorities do not really welcome such an activity. Everywhere near the beach there are signs warning of the dangers, which stop very few people. 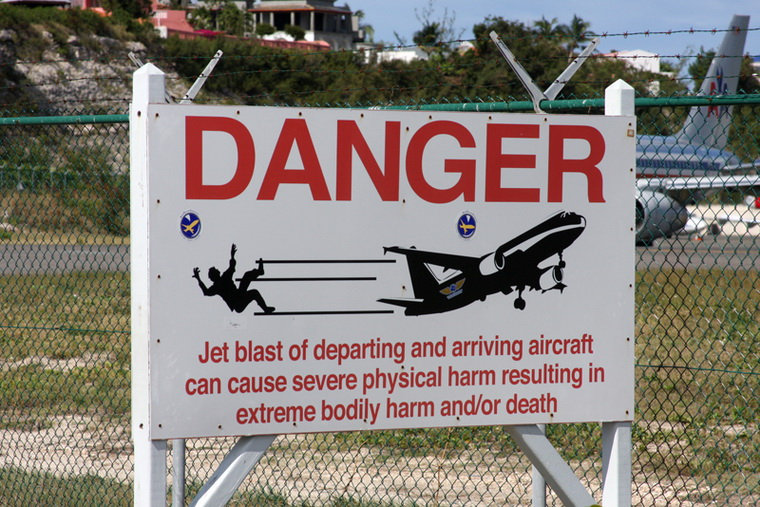 There are such signs all over the beach, but it does not stop anyone.

Next to the beach is the famous Sunset Bar and Grill. There was a loudspeaker here until August 2015 that warned of approaching planes. On the beach you can see information boards, where the schedule of landings and takeoffs of planes is written. 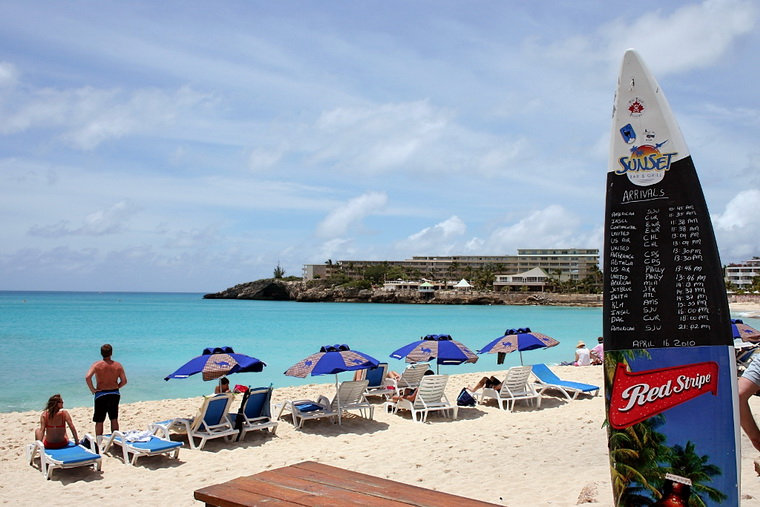 And this is the local amateurism. Surfboard with the schedule of aircraft arrivals written on it

The peril of the beach

Totally insane tourists have an equally insane pastime, something like “endure the jet stream.” It’s when a group of people try to get hit by a strong jet stream from an airplane taking off and try to hold on. Some of them can do it, but some of them are knocked down because the jet stream can reach up to 160 km/hour. 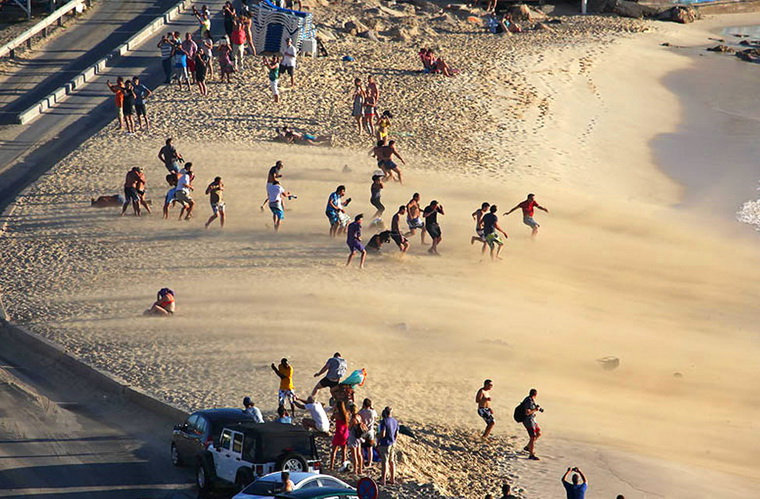 The crazy attraction at Maho Beach

We, as sane people, warn you, as sane people, under no circumstances try to repeat this. Playing with death is not a good thing. Besides, there has already been vivid evidence of this. On July 12, 2017, when Caribbean Airlines Flight 457 departed Princess Juliana Airport, a 57-year-old tourist from New Zealand died. The jet stream from the plane threw the woman hard onto the concrete, killing her as a result. There were warning signs on the beach for a reason.

To relax on the beach Maho, swim in the gentle Caribbean Sea and sunbathe on the sand in the usual sense of beach holidays you are unlikely to succeed. But to tickle the nerves and get a killer dose of adrenaline just right. 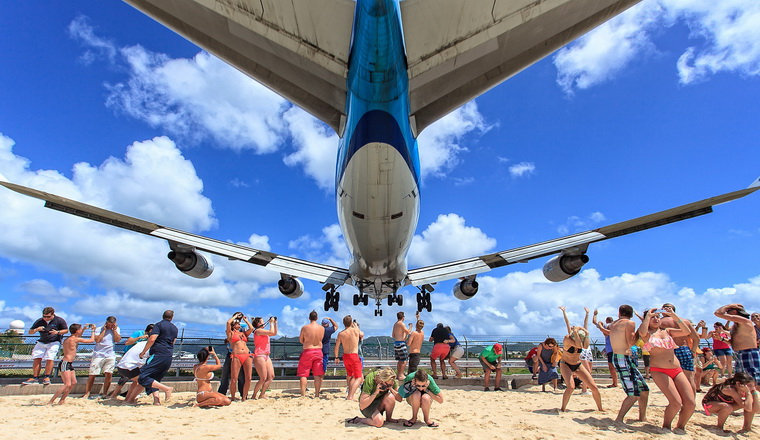 Maho Beach and the plane

READ
The colored sands of Chamarel, a land of seven colors. Mauritius 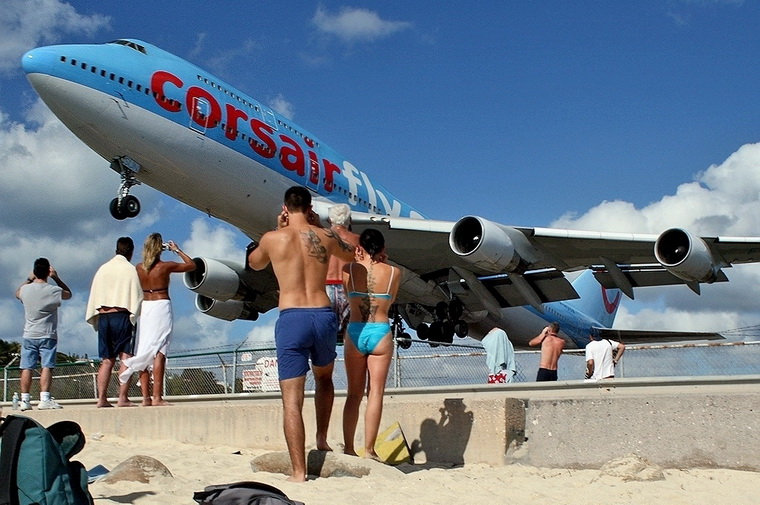 Airplane taking off over the beach 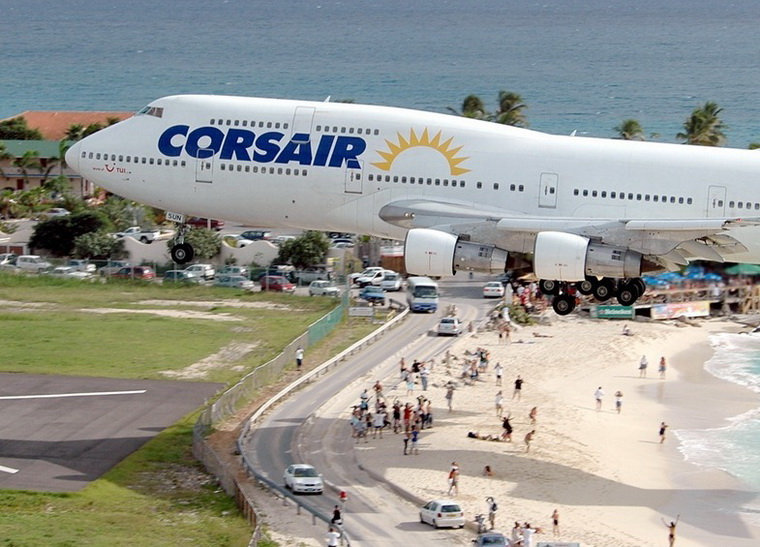 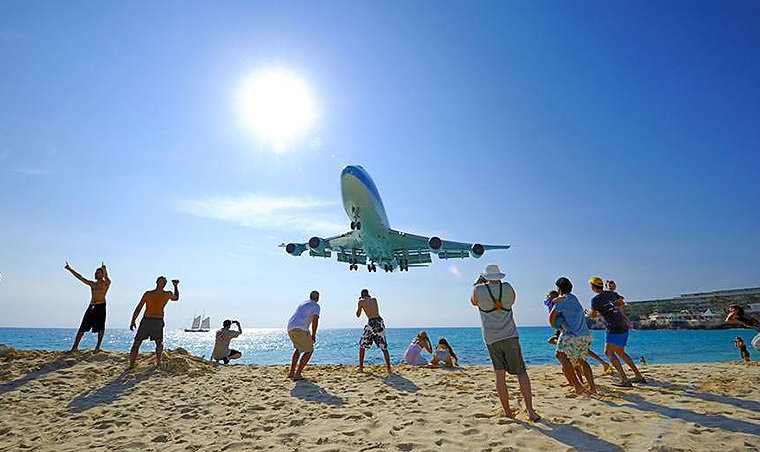 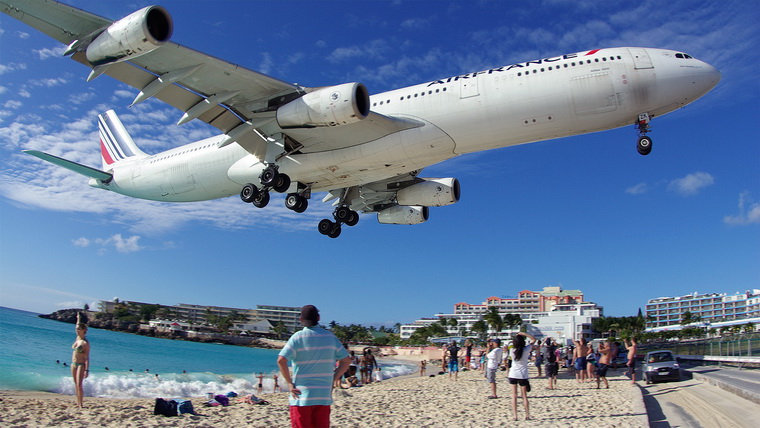 The famous host of “Heads and Tails” program Anton Ptushkin in this video will show you what is the beach with planes overhead.

Review: Beaches on the island of St. Maarten (Caribbean Islands) – Maho Beach, planes, adrenaline! I’ll tell you how to get there.

The island of St. Maarten is divided into 2 parts, one of them belongs to the Netherlands and the other to France. And each half of the island has its own airport.

In December 2019, we visited Sint Maarten, which is a self-governing state with significant autonomy of the Kingdom of the Netherlands.

The most famous beach on the island of St. Maarten is, of course, Maho beach. It’s the one where planes land low, because the beach is near the airport. Such entertainment for tourists)) 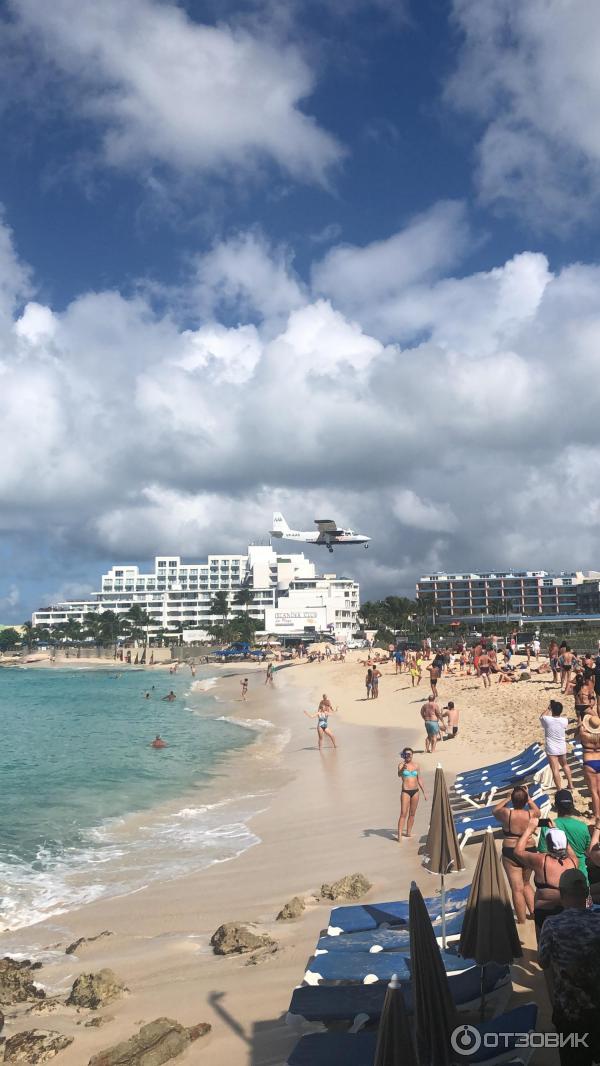 During the day there are a lot of planes of different sizes. Until 1 pm land, mostly small, and in the afternoon – the big Boeings

The actual schedule of arrivals is posted on the board in the bar. Here it is: 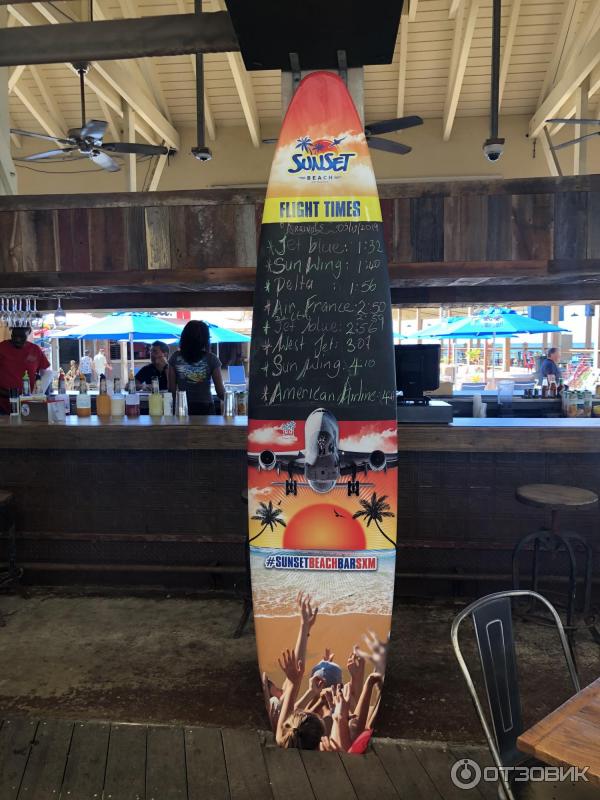 So how do you get to Maho Beach?

If you flew into Princess Juliana Airport, you can walk to the beach

And if you got to St. Maarten on a cruise ship, remember: you first need to get off at the Terminal and walk or drive to the town of Philipsburg. It’s close, but you’ll have to walk for about 15-20 minutes next to the roadway or take a cab for about 5 minutes 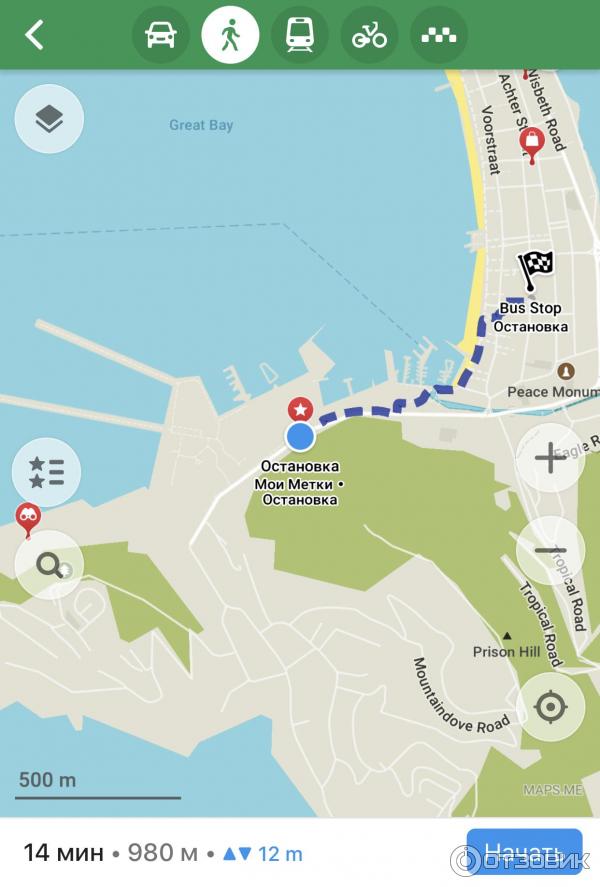 Next you need to find a stop, it’s marked on the map, but visually it’s pretty hard to identify. The navigator and locals will help you )) we quickly got oriented and waited for a minibus. Transport runs frequently, you need a bus with a sign MAHO BEACH, here is kind of simple. The fare is $3 per person. The ride is about 20 minutes, as the bus makes stops. Here’s a map of which direction to go: 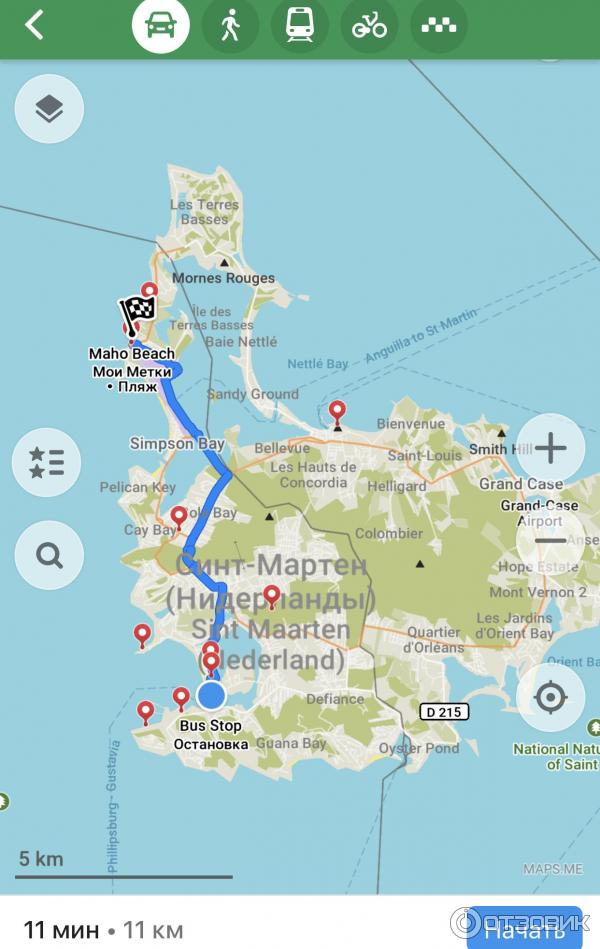 So there you are. This is where the planes fly over the heads of onlookers! On the fence along the airport there is a “Danger” area which should be avoided if possible. I will explain why. When you take off, the bigger airliners blow everything away right in this area. Planes take off “with their backs” to the audience, they fly not towards the sea, but to the opposite side. I’ve seen some tourists get “blown” into the sea, taking all their belongings with them. Some people think it’s fun, well, see for yourself

The main thing, I warned you. 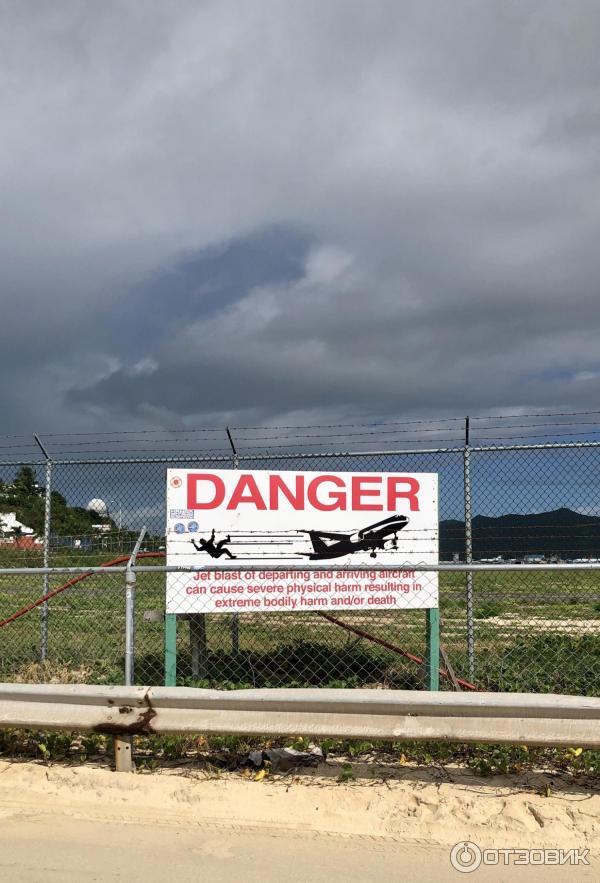 We loved it at Maho Beach. Sure! Free entertainment, breathtaking, especially when passing Boeings)))). You don’t see that every day! 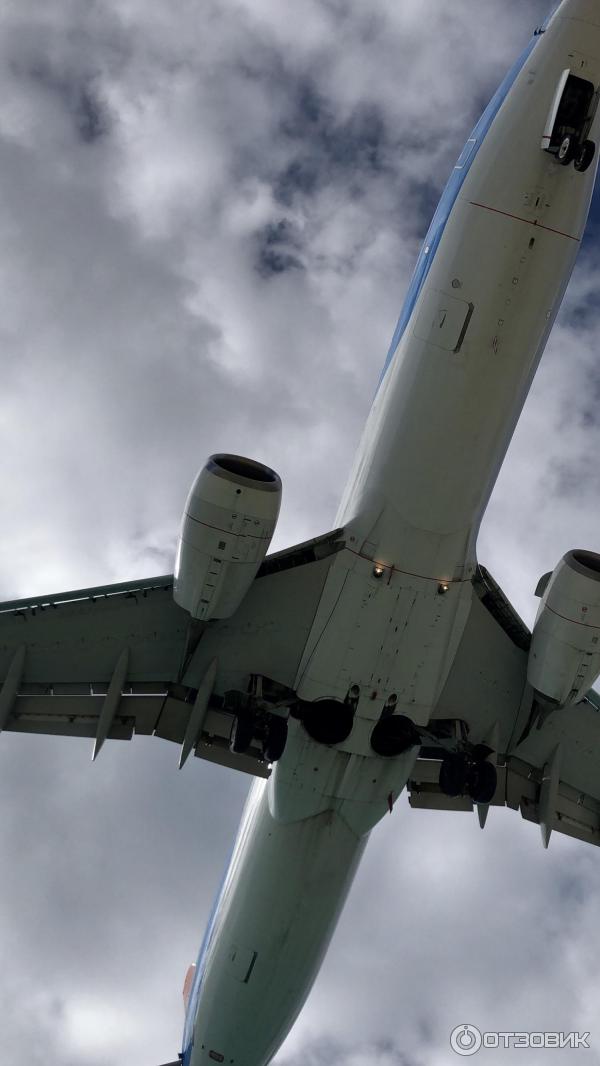 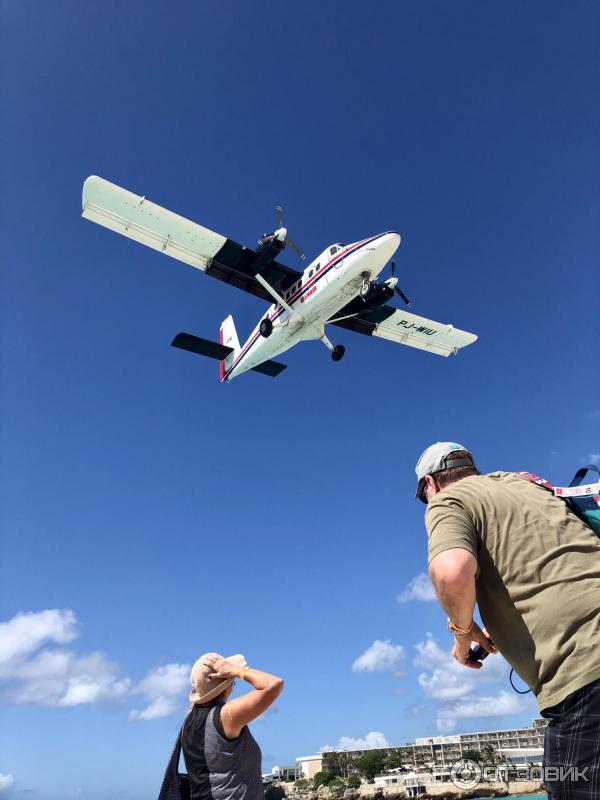 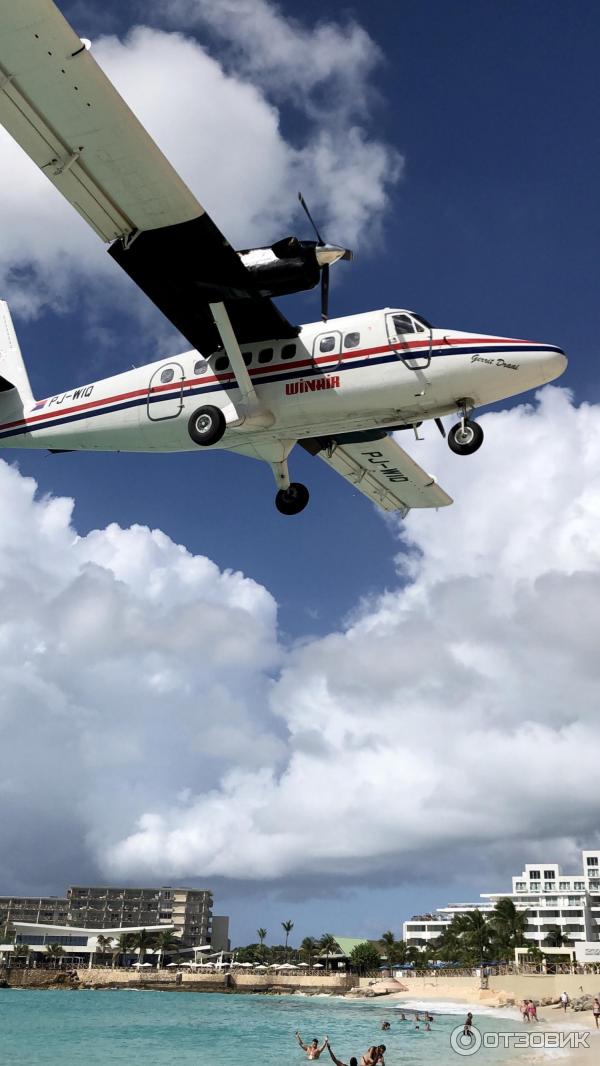 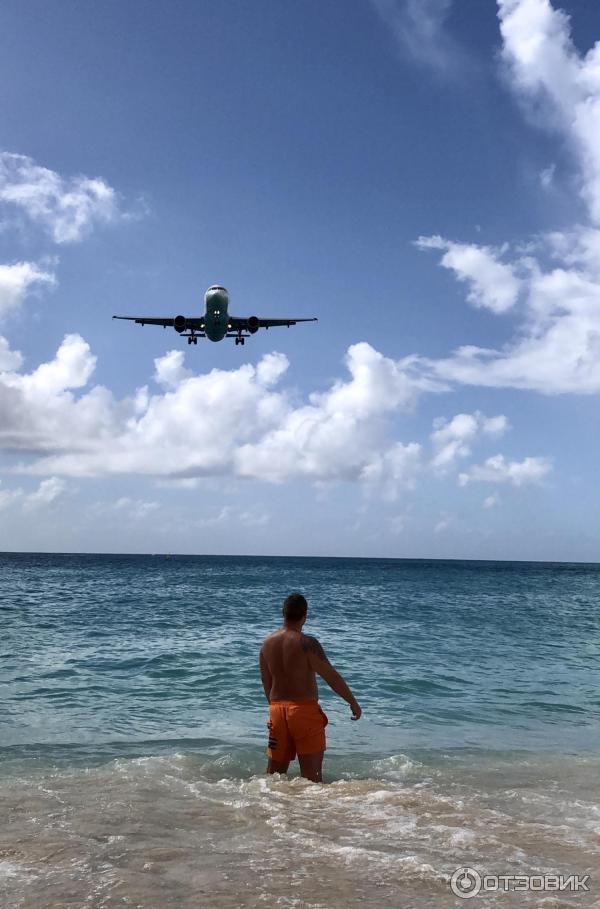 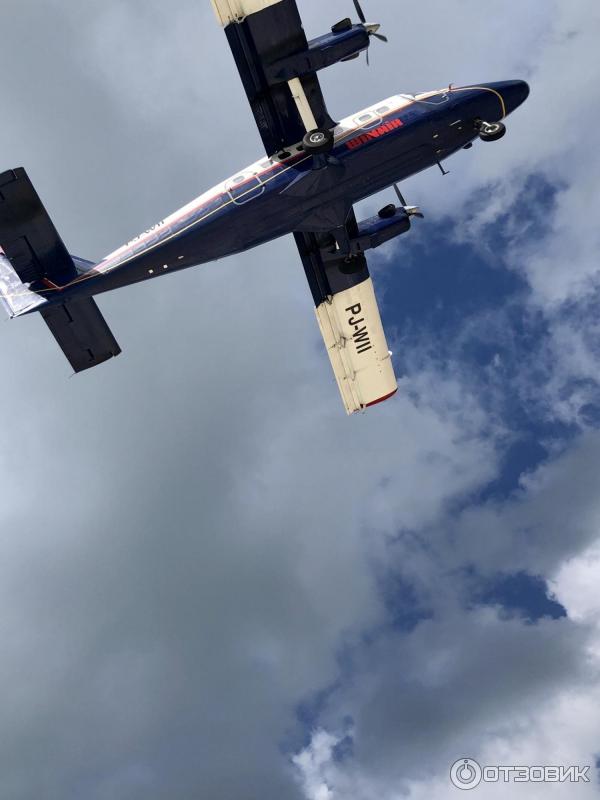 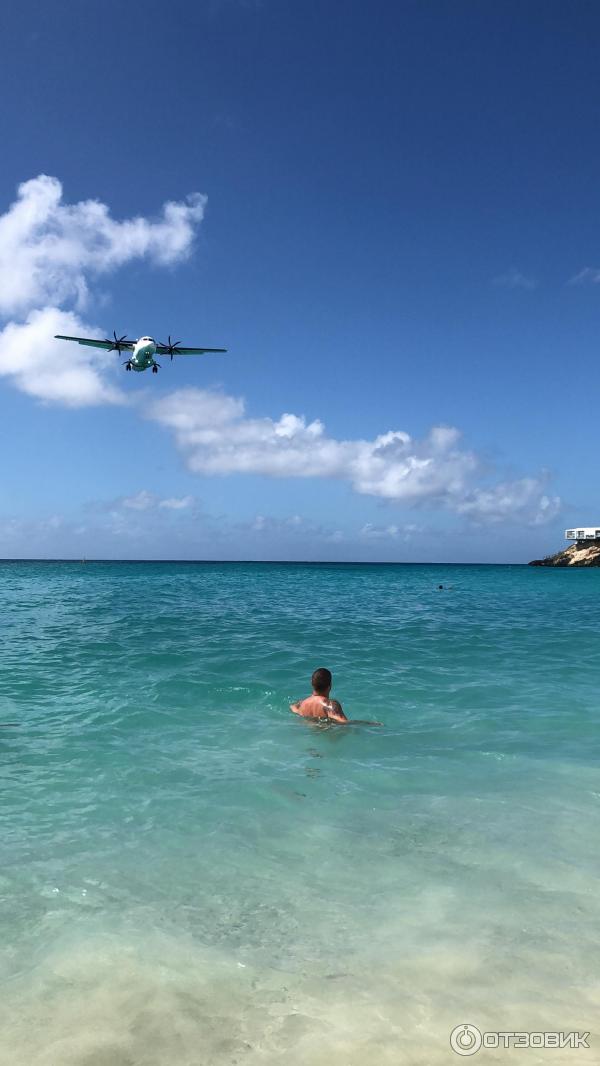 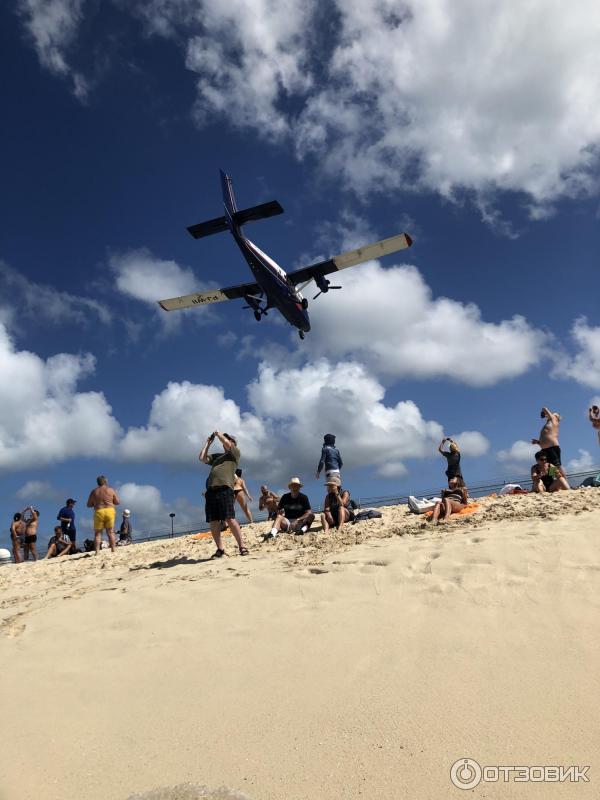 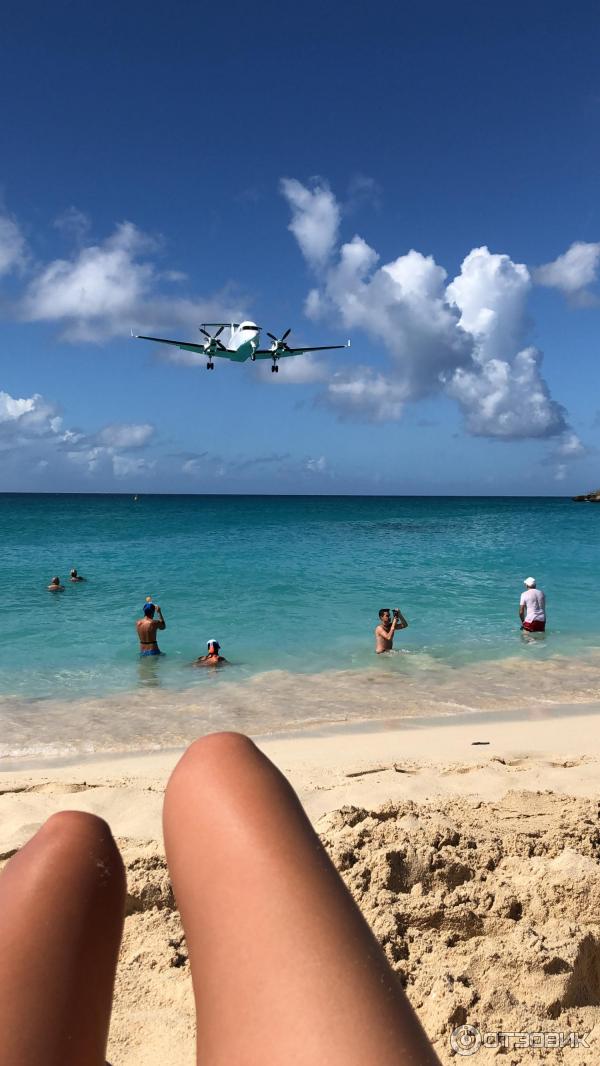 After we had a lot of fun with planes, we decided to go to another beach. It was advised on tourist forums. It’s called Mullet Bay and you can walk there from Maho Beach, so we did it. 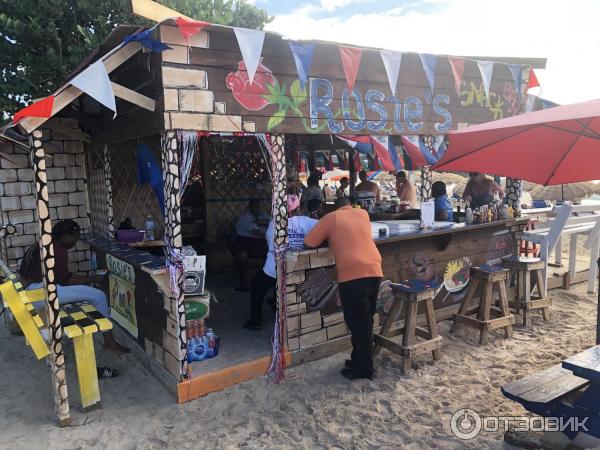 In principle the beach is like a beach. Lots of tourists, not enough space. (Nothing attractive there we did not find)). On other islands we saw more interesting places. Well, never mind. We went for a walk, relaxed, saw what’s up.

Т. Since the review I’m writing about the beaches of St. Maarten, I can say more about the nearest beach to the seaport. It is a large, landscaped, city. It is located right in the town of Philippsburg. But we like more authentic, wild places, so the city beach did not interest us.