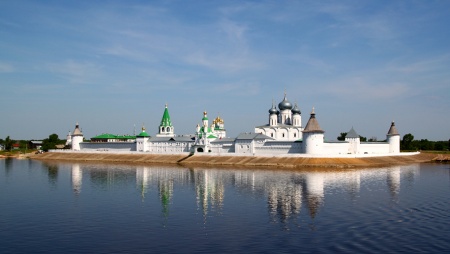 The monastery was founded in the first half of the fifteenth century by the Venerable Macarius of Zheltovodsk and Unzhensk. Zheltovodskoe is named after the Yellow Lake, on the shore of which St. Macarius founded the monastery. The Volga, changing its course, swallowed up the lake over time, and the monastery found itself on the Volga shore.

The altar of the central cathedral was consecrated in honor of the Holy Trinity, so the monastery is called the Trinity Monastery.

In 1439 it was burnt down by khan Ulu Muhammed, the monks who had arbitrarily settled on someone else’s property were killed, and St. Makarii was taken captive. The Kazan Khan Ulu-Mahmet paid special attention to the well-behaved hegumen. Those who brought the prisoner said: “He is a gentle man; not in word or deed he caused harm not only among his own people, but even among our countrymen, he did not settle on our lands, he did not arbitrarily occupy them”. Then khan with anger has shouted at military leaders: ” For what purpose you have insulted such kind husband who did not argue with you, and have ruined his habitation? Or do you not know that for such meek men Allah Himself, who is One over all, may be angry?” Having said this, Ulu Mahmet ordered that the innocent sufferer be set free. After receiving his freedom, the Venerable Macarius asked to release the other prisoners as well. Four hundred men and a few women with children were set free.

Returning home, the travelers halted on the right bank of the estuary of the Sviyaga river. Saint Makarius chose this place not only for a three-day rest, but also to establish a monastery on it. It is located on a hill, from three sides protected from the winds by a mountain, as if a high earthen shaft. Springs of spring water in abundance irrigate the land, sanctified by the prayer of the reverend father.

But Kazan’s khan forbade them to remain on his territory, and the travelers had to seek another refuge. At last, having reached the limits of the Galich land, they stopped at the town of Unzha. The local inhabitants joyfully received the Monk Makarii and surrounded him with veneration and care. But seeking first of all the kingdom of God (Matthew 6:33), the great ascetic withdrew from the city. And 15 versts away from him on a high deserted spot on the right bank of the river Unzhi Saint Makarii made himself a cell. Thus was established the new Zheltovodsk Makary-Unzha monastery. And again to the loving father longed for monastic life. Soon a monastery was settled, but the monks could not enjoy for long the wise discourses and the life of the holy elder. At the 95th year of life on 25 July 1444 the Monk Makarii departed to the Lord. Dying, the saint commanded his spiritual children “in memory of his deliverance from the slavery of the Hagarites” to arrange a monastery on the bank of the mouth of the River Sviyagi, on that spot, which he himself chose and consecrated through prayer. But the monks could not at the same time fulfill this will…

Nikon studied Orthodoxy at the monastery for eight years and remained there as a novice until 1624.

Old Believers believe that on the way to Unzha he founded one of the Kerzhenetsky sketes – Olenevsky, which in the XVII century went into schism. Resumed the monastery at the old place Murom citizen Abrahami in 1620 above Abrahami grave now built ciborium-rotunda.

Since 1991, the monastery buildings were transferred to the Nizhny Novgorod Diocese. In the same year, by decision of the Holy Synod, the Makarievsky Zheltovodskiy Nunnery was reopened. About 25 nuns lived at the monastery.

In 2005, Archbishop George performed the Great Consecration of the Throne in honor of the Great Martyr Catherine in the Cathedral of the Assumption.

On August 7, 2007, the Honest Head of St. Makarius was transferred to Makarius Monastery from the Pechersk Ascension Monastery; Archbishop George consecrated the Trinity Cathedral.

Directions: The monastery is located in the village of Makarieva Lyskovsky district of Nizhny Novgorod region. You can get here either through the town of Lyskovo or through Nizhny Novgorod. From Nizhny Novgorod from Kanavinskaya bus station there is a bus to Mikhailovsky through Bor and Makarievo. From Lyskovo: in summer – ferry crossing; in winter on foot on ice or by aerotaxi (“air cushion”). The ferry in summer runs from Lyskovo at 6:15; 8:15; 12:15; 15:15 and 18:15. In early spring and late fall, the first and last voyages are cancelled. From 40 to 80 rubles are taken from the passenger. For the car from 300-400 rubles and above. Ferry telephone: 8930-8029-959.

On Sundays at 8:00 a.m. there is a prayer service with the Akathist to St. Makarius in the church of the same name. 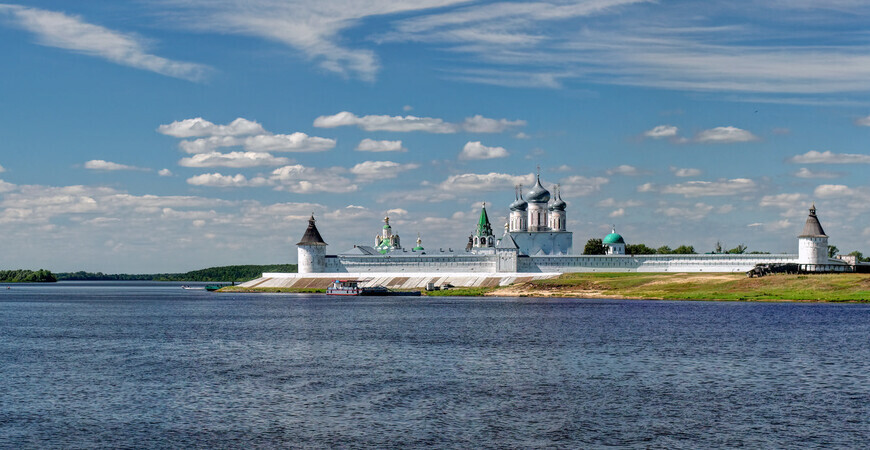 Holy Trinity Makarievsky Zheltovodsky Monastery is a working women’s monastery, located on the left bank of the Volga River in the village of Makarievo Nizhny Novgorod region, about 90 km downstream from Nizhny Novgorod. The snow-white fortress walls and golden domes of the temples are visible to tourists traveling along the Volga River by steamer from afar. The most beautiful views of the monastery open exactly from the water, according to many who have visited this place with excursions. The temple complex belongs to the architectural monuments of Russia. In 2019, the Bank of Russia issued a commemorative silver coin with a face value of 25 rubles “Holy Trinity Makarievsky Zheltovodsky Monastery, Nizhny Novgorod region”.

The monastery has a long history, and at the moment is considered to be restored. In addition to monasticism, it is engaged in missionary activity. During the last revival of the monastery hundreds of thousands of people from different parts of Russia, France, Germany, Great Britain, USA, China, Australia, Canada, Italy, Israel, Ukraine and many other countries have visited here to look at the Volga gem. Makarievskaya nunnery is one of the most visited temple complexes of the Nizhny Novgorod region. In addition to tourists, a large number of pilgrims come to the monastery, wishing to worship the head of the Venerable Makary and the iconostasis with a part of his relics.

In May 2018, 10 valuable icons were stolen from the Assumption Cathedral of the monastery, among which were images with parts of the relics of St. Macarius, as well as a myrrh-streaming image and Vladimirovskaya icon of the Mother of God of the XVII century. However, the criminals were detained two weeks later, the icons were found and returned to the clergy.

The date of the foundation of the monastery is considered to be 1434-1436. The monk of the Ascension Pechersk Monastery in Nizhny Novgorod Makary, seeking solitude, decided to settle on Lake Zheltovody (the lake was swallowed up by the Volga when its course was changed). Later the laymen began to come to him for advice and help, and in time Makarius was joined by other novices, and it was decided to build a church in honor of the Most Holy Trinity. But already in 1439 the church was burnt to the ground by Ulu Muhammad’s troops, all the monks were killed and Makarii himself was taken captive. But Khan noticed the blessed elder and set him free, and together with Makarii, at the request of the monk himself, about 400 more of his prisoners were set free.

The first revival of the monastery began in 1620 by the starets Avramii, who, according to legend, had a dream about St. Makarii three times and asked him to revive the monastery near Yellow Lake. Along with the tsar’s blessing to build the monastery, the staretsman received permission to build the Makarievskaya fair. The convenient location of the monastery on the bank of the navigable Volga facilitated the development of a lively trade at the fair, and the monastic hegumens made many efforts to this end. The Makarievskaya fair was the largest in Russia, and perhaps in all of Europe. Since the trade was conducted on monastic land, all the income from the fair went to the needs of the church. With this money were built stone structures and fortress walls of the monastery.

In 1700, for political reasons, Tsar Peter Alexeevich issued a decree, by which all the profits from Makarievskaya fair went to the state treasury. In 1816 the fair mysteriously burned down, and from 1817 completely moved to Nizhny Novgorod. It began to lack funds for the existence and maintenance of the buildings, and the monastery was considered to be out of state. After the great fire, it was decided not to rebuild the church buildings, and the monastery was disbanded. In 1868 the monastery was closed, all icons were given to Alexander Nevsky Novoyarmarochny cathedral.

Next revival of the monastery happened in 1883. The monastery was partially restored by nuns and parishioners, and by 1917 there were about 300 sisters. However, with the rise of Soviet power the monastery was liquidated, and the nuns were forced to lead a secular life.

In 1928-1929 there was an orphanage in the nunnery. During wartime, the monastery buildings were converted to an evacuation hospital, after which a veterinary technical school was opened here. Also, cattle and animal feed were kept in the church buildings.

In 1990 the monastery was supposed to be a tourist center, but in 1991 it was transferred to the Nizhny Novgorod diocese, and that same year it was decided to restore the Makarievsky Zheltovodskiy convent.

The monastery attracts attention with its fortified white walls, on which there are watchtowers. One can get inside only through the massive gate, which at the same time serves as an entrance to the over-the-gates temple in the glory of the Archangel Michael. Inside the fortress walls are the cells of nuns and administrative and household premises.

The main temple of the monastery is the cathedral in the name of the Holy Life-Giving Trinity. It was modeled on the Assumption Cathedral of the Moscow Kremlin. Inside the temple can still see the traces of floods from the Volga River floods, which occurred periodically, until the monastery was protected by an earthen berm. The iconostasis in the temple has been renewed, but many of the frescoes have not been restored to this day.

The schedule of services can be viewed on the official website of Holy Trinity Makarievsky Zheltovodskiy Monastery. Entrance to the monastery is available from early morning to evening. There is no entrance fee, but the church welcomes any voluntary donations.

The inner courtyard of Makarievsky Zheltovodskiy monastery on Google Maps

The temple complex is located 88 km from Nizhny Novgorod in the village of Makarievo, Lyskovsky district.

You can get to Makarjevo from Nizhny Novgorod by buses from Kanavinskaya bus station to Mikhailovsky. You can get by your own car along the highway K21, the road will take less than two hours.

Those who do not have their own vehicle can take a cab or a Kiwi transfer.