Malahide Castle is located on the outskirts of Dublin, Ireland, a lot of dramatic events happened here, the fortress has a rich history.

When you visit the castle it seems that the echoes of former battles for honor and freedom reverberate through the centuries, and the ghosts, which according to witnesses can be seen here at night, are ready to tell stories of their fate. After an interesting tour, where the guides will try not to miss any interesting details from the historical past of the manor, you can take a closer look at the interior. You can also enjoy the atmosphere of the past centuries on a visit to the castle museum. A family walk in the forest park near the main buildings is a pleasant experience.

The name of the writer James Boswell is also associated with this castle.

Here in the early 20th century were found the personal notes of the author, who became famous for a book written in the diary genre. A private collector bought them from a descendant of the Talbot family for a handsome sum.

History of Malahide Castle on the outskirts of Dublin

The construction of the castle in the village of Malahide was begun by Richard Talbot, a knight. He received the land and the harbor from the monarch Henry II. Talbot descendants owned the castle for a little less than 800 years. True, in the mid-17th century the estate was managed by Mills Corbett, but only for a decade. He received Malahide at the behest of Oliver Cromwell, then Lord Protector of English, Scottish and Irish lands. After the news of Cromwell’s death and the dramatic change of power, Corbett, apparently anticipating imminent reprisal, took his own life. After these events the castle was returned to its rightful owner.

But that was not the only tragedy, witnessed by the ancient castle. It is worth mentioning a battle that left a significant imprint on the history of the whole of Ireland. On the eve of the so-called Battle of the Boyne River, the numerous Talbot family had a carefree breakfast in the Great Hall of Melahide, and in the evening everyone bid farewell to their lives.

The last owner of this noble family was Baroness Rose. Before leaving for Australia, she sold the castle to the state to pay the exorbitant inheritance tax. Some of the rarity furniture and antiques which preserved the atmosphere of past times were sold earlier. This has led to controversial situations, many of which, however, were resolved in favor of the public. Now thanks to concerned statesmen and private persons the interior of the castle has been restored to its former grandeur.

In the walls of the castle have repeatedly seen ghosts, and the locals with knowledge will tell all the curious their version of their appearance. For example, the unlost soul of a very young boy wanders the corridors of the manor, sighing heavily. A deep wound he sustained in a duel gapes in his side. It was an insult to Lord Galtrim’s (as legend has it, the young man’s name) fiancée by none other than members of the Talbot clan. The offender was more skilful in the art of the duel, and the beautiful lady, because of whom it took place, after the death of the groom went to the wedding with the winner. Now Galtrim regularly appears in the family nest of Talbot, either because of a terrible injustice, because he died on his wedding day, or because the bride chose another. But fate prepared a bitter fate for her too: the girl, too, could not find peace after her death. Her figure, shrouded in a haze of mist, is often seen together with her third husband, the chief justice of the town. Workers have witnessed their marital quarrels several times.

Another legend connected with Malahide tells of the fate of the court jester Puck. He fell in love with a relative of the castle masters, but could not take her as his wife. It is not known how the lady felt about the jester, but, most likely, due to her lack of title and fortune, she remained for him only an unattainable dream. Before his death, he made a promise to appear here until the next owner of the castle took an ordinary girl as his wife. The ghost was no longer seen after the castle was bought by the town council. 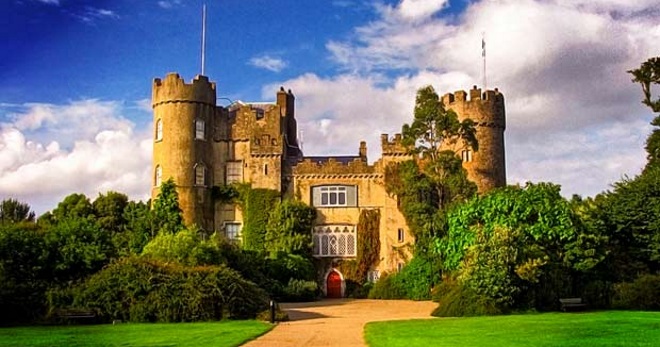 In Ireland, 14 km away from Dublin there is Malahide Castle, one of the oldest castles of the country. It’s not just the interesting museum and the beautiful gardens surrounding the castle that draws its visitors. Malahide is one of Ireland’s most famous haunted castles.

Malahide Castle was built in 1185 by Richard Talbot who was awarded the land by King Henry V who had just expanded his holdings over the Green Isle. The name of the castle translates from Irish as “a place near a ford.

Malahide Castle belonged to the knight’s descendants for almost 8 centuries – except for the time of Oliver Cromwell, who gave it to one of his followers, Corbett. When Cromwell died, Corbett hanged himself, and the castle was returned to its former owners. In 1975, the last owner of the Talbot family sold the castle to the state. 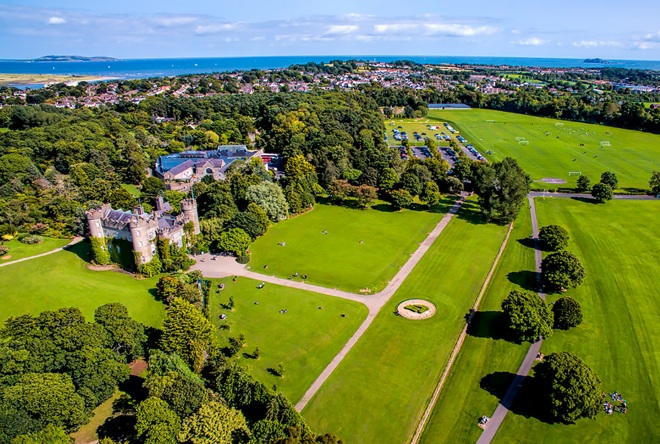 The castle has been rebuilt several times. Today it and other buildings in the complex is a museum. The last owner of the castle before it was sold sold sold part of the movables, so the staff had to work hard to restore the interior of the castle. Today there is a museum, where you can get acquainted with the life of British and Irish aristocrats, learn more about the Talbot family and their influence on the development of the surrounding area. In addition, at the castle there is a museum of model railway vehicles. 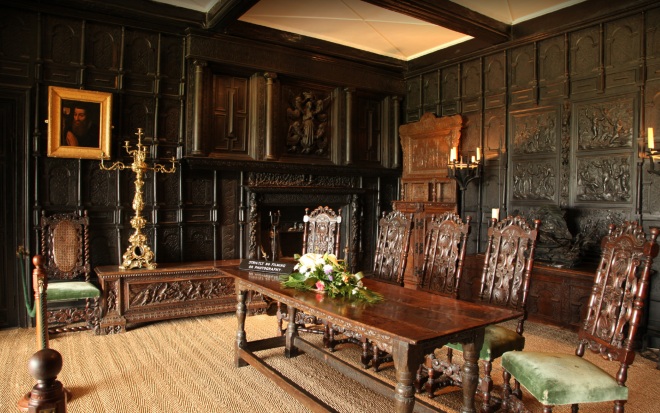 Malahide Castle is famous for its ghosts. What’s interesting, there are a lot of ghosts:

Malahide Castle is surrounded by gardens, which are named Talbot – after its former owners. The botanical gardens cover 22 acres – that’s almost 9 hectares. The gardens were created by Lord Milo, the 7th Baron Talbot, a passionate collector of botanicals. In the gardens you can find plants from all over the world – in total, there are more than 5,000 species. The Talbot is also home to Ireland’s only Butterfly House, which is home to 20 species of exotic insects. You can either just stroll around the gardens, or you can listen to a guide and learn a lot of interesting facts about their creation and about the last owners of Malahide Castle – Milo Talbot and his sister Rose.

How to visit the attraction?

To get to the castle from Dublin is possible by train – the station is called Malahide, from it you have to walk just a few minutes. You can also get to Malahide Castle by bus: Routes №32 and 42 from the center of Dublin and №102 from the airport. If driving on your own, the shortest route is via Malahide Rd/R107, and the shortest route in terms of time is via the M50.