Malmaison Castle is the former residence of Josephine, the first wife of Napoleon Bonaparte and the first French empress. It is located 20 km from Paris.

Chateau Malmaison, located a few miles west of the center of Paris, which surprisingly united the two destinies of Josephine and Bonaparte. Château de Malmaison was chosen and bought by Josephine when her husband was away in Egypt. At the time, the property looked like an old and abandoned property. Upon his return, Bonaparte hired architects to repair the dilapidated house. The old building, rebuilt under Louis XIII and then enlarged under Louis XIV, is gradually transformed into a modern palace. Malmaison is a symbol of youth, budding power and Bonaparte’s rise to power.

History of the castle of Malmaison

The name Malmaison or “bad house” goes back to the early Middle Ages, to the time of the Norman invasion. From here the Vikings raided, pillaged and committed outrages. The house was purchased in 1390 by Guillaume Goudet, who served in the royal army of France. In 1771, a new owner, the wealthy financier Jacques-Jean le Couteau du Molay, came to the house and in 1799 he sold it to Madame de Beauharnais. The sale was confirmed by Napoleon when he returned from Egypt.

For three years the leadership of France was exercised from Malmaison and the Tuileries. It was here that the First Consul put the country back on its feet, still recovering from the Revolution. After Josephine’s divorce from Bonaparte, the Malmaison Palace passes entirely into the possession of the empress, where she resides until her death. Bonaparte visits the estate before his exile on Saint Helena.

After many twists and turns and despite the considerable division of the estate, the castle was donated to the state by philanthropist Daniel Ilfa. The Napoleonic era museum opens in 1906.

The castle cellar held 13,000 bottles of wine of various varieties. It was Josephine who made “Bordeaux” wine popular in France. Before that the French aristocracy preferred champagne and Burgundy wines.

Today Josephine Malmaison Palace attracts many tourists with its incomparable style which fully corresponds to the direction in art of the 18th century. The interior rooms of Malmaison are decorated with a sense of elegance and luxury. In the reconstructed halls one can see statues, portraits, decorative vases, everyday objects from the imperial throne from Fontainebleau to the marching bed on which Napoleon died.

In the gardens of the palace park, thanks to the enthusiasm of Madame de Beauharnais, more than two hundred plants of various species were collected. At the request of the empress, in order to enrich the garden, a variety of species of animals and birds were brought to the castle, which were allowed to roam freely in the park. Walking in the park garden, the fragrant rose garden, the brainchild of Josephine, deserves special attention. It has more than 250 species of roses. For its arrangement the empress invited the best English gardeners.

The garden has unique trees, some of which were planted personally by Napoleon.

View from the main gate

To get to the castle by public transport, take the suburban train from Paris RER (line A) to “La Defense” and then take bus 258 and get off at the Le Chateau stop.

Full entrance fee is 6.50 EUR. For visiting solely the garden – 1.50 EUR. For children under 18 years old free of charge. On the first Sunday of each month museum offers all tourists free admission.

For a trip to the Malmaison preferably you should bring a camera and a good mood. 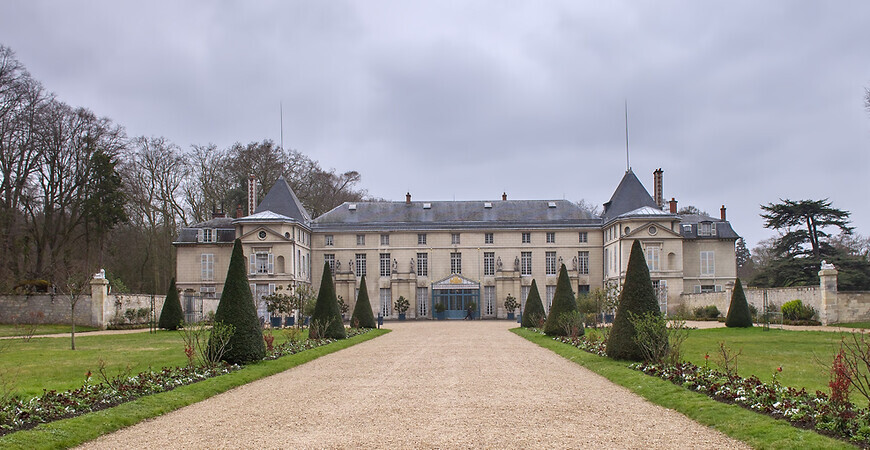 Malmaison Palace is a small château located in the suburbs of Paris. The palace became famous as the place of private residence of Napoleon Bonaparte and Josephine de Beauharnais.

The small neat palace with a picturesque garden is not the most popular country residence among tourists. In scale and grandeur Malmaison is inferior to Versailles, but only externally. Behind the ascetic facade lurks the sumptuous interiors of the Napoleonic era.

The Palace with the interiors of the Napoleonic era is open all year round. The exact schedule depends on the season:

Last call is 45 minutes before closing time. Weekends: every Tuesday, December 25 and January 1.

Ticket price does not change throughout the year:

Separately charged: visit to the gardens, €1.5 and temporary exhibitions, €2; audioguide, €2. On the first Sunday of each month – free admission for all visitors. Free access to Malmaison Palace on other days can: EU citizens under 26 years, teachers with the card “Pass-Education”, persons with disabilities and one companion, unemployed.

The name of the place, which translates from French as “bad/bad house,” goes back to the 10th century. In those days, the Normans plundered settlements along the riverbed of the Seine and drove the looted treasure presumably to the site of the present Malmaison Palace.

The first written mention of “Mala domus” is found in the archival records only in 1244. But the names of those owners are unknown. In 1390, the lands of Malmaison were purchased by Guillaume Goudet, a sergeant in the royal army. Until the middle of the XVIII century land belonged to his descendants. The palace on the vast forest-park territory was erected in 1610.

Since 1737 the castle and the park were leased to wealthy financiers. Tenants used the palace as a place for receiving their distinguished guests. During its second half the palace was repeatedly sold, and the new owners rebuilt the old house.

After the French Revolution, another owner was forced to sell Malmaison. The new mistress of the estate became Josephine Bonaparte. Her husband at the time was the first consul. Napoleon liked to rest in the estate after his foreign campaigns. It was also where he worked: a study with a library and a meeting room were equipped for these needs.

In 1802, the Bonaparte family moved to the Château de Saint-Cloud, but periodically visited Malmaison. In 1809, when the couple separated, the Emperor gave his ex-wife the property of Malmaison. The former wife of the Emperor of France was engaged in garden decoration and rose breeding – she bred a new garden variety of flowers, which was later named Josephine. In the garden was organized menagerie with such exotic animals as: kangaroos, seals, zebras. It was Josephine who brought to Europe and was the first to breed black swans. We can say that all black swans in Europe are descendants of the empress’s birds.

Here, in 1814, the Empress (she retained this status even after her divorce) hosted the Russian Emperor Alexander I. Soon the owner of Malmaison died. Later it was Alexander I who bought paintings from the collection of Josephine Bonaparte for the Hermitage.

Now tourists can consider the interiors of the palace of the Bonaparte era. The reconstructed rooms in the Empire style contain objects of original furnishings. Of the most interesting rooms:

Impressive original objects include: Napoleon’s throne and royal sword; Josephine’s outfits from different eras; the death mask of Napoleon and his marching bed on which the Emperor of France died.

An audio-guided accompaniment is available in Russian, the standard program. In French and English there are thematic tours devoted to different periods of the life of the famous Bonaparte couple.

How to get to Malmaison Palace

Malmaison Castle is located 20 km from the French capital. The trip by car takes 45-50 minutes, depending on the traffic situation. Parking for cars and motorcycles is free.

By ground transport from the center and other areas of Paris, you should also go to the stop “La Défense”. Bus stops here are: 73, 144, 276; streetcar number T2.

From the stop “La Défense” take bus number 258 to the stop “Le Château”. The road will take about 25 minutes. After getting off the bus, you need to cross the highway RN13 and walk a little back – the palace of Malmaison is 300 meters on the right side.

Cabs from Paris to the Château de Malmaison can be called through Uber applications and its French counterpart Le Cab.