“Maracana. There is no soccer fan in the world who does not know this name. The pride of soccer fans in Brazil and the secret envy of fans in the rest of the world. There is hardly a team that would not want to step on the lawn of the Maracana. And there’s hardly a fan who wouldn’t like to see their team there. “Maracana is the largest stadium in Brazil and the second largest in Latin America. Until recently – the most spacious arena in the world. Home stadium of Flamengo, Fluminense and the Brazilian national team. Located in Rio de Janeiro. Officially the stadium is named after journalist Mario Filho, an enthusiastic builder of the super arena, who has put a lot of effort into the project. The stadium got its famous nickname from a nearby river.

How was the stadium built

The reason for building the Maracana was the FIFA decision to hold the World Cup in Brazil in 1950. In fact, Brazil’s application was the only one. Soccer was already the second religion of the country at that time, and the government decided to build a giant stadium to amaze the world soccer public. The first stone in the foundation of the stadium was laid on August 2, 1948. This was the official birthday of the Maracana. The construction was carried out with maximum intensity. The construction was financed by the city treasury, so the new stadium became a municipal property. The arena was ready for use in record time, but the works were not completed until 1965.

“Maracana” was an impressive spectacle. The stadium was shaped like an oval, the roof was attached on consoles, the field was separated from the stands by a ditch filled with water. The dimensions of the Maracana, on axes, were 317 by 279 meters, with a height of 32 meters.

On June 16, 1950, the youth teams of Rio and São Paulo met in the opening match. “The Paulistas won 3-1, and Valdir Pereira, the future legendary Didi, scored the first goal.

The first tournament for the new arena was the 1950 World Cup. Everybody had seen the Brazilian national team as the winner, smashing all their opponents. The path to the decisive match of the second finalist, Uruguay, was much more thorny, and stodgy games against Spain and Sweden only confirmed Brazil as the favorite.

The demand for tickets was frenetic. The official number of tickets sold was 173,830, but the actual number of fans actually attending the match was estimated to be over 210,000. However, the match itself turned out to be a bitter disappointment for the owners of the stadium. The Brazilians opened the scoring. It seemed that nothing would prevent them from overpowering their opponent. However, Uruguayans evened the score, and 11 minutes before the end of the match forward Higgia struck from the right edge of the penalty area struck the near corner of the gate to the Brazilians. The hosts failed to get back into the game.

There was a deadly silence in the stadium after the final whistle. As Higgia would later say, only three people could silence the packed Maracana stands – Frank Sinatra, John Paul II and himself. To avoid bloodshed, teams and coaches left the stadium under police guard. The country went into mourning. The press reported several fans who died in the stands from heart attacks and dozens of suicides across the country.

It was the worst defeat in the history of Brazilian soccer. The Brazilian Football Association decided to abandon the unfortunate white color of the uniform, and since then the country’s team plays in yellow shirts with a green stripe and blue shorts. Many of the participants in that ill-fated game never wore their national team uniforms again. And Barbosa, the goalkeeper who missed the decisive goal, became an outcast.

Many years later Barbosa bought the “cursed” goal and burned it himself.

“Maracana from the first championship to the present

Many achievements have been set at the Maracana. In 1963, the Fla vs. Flu derby was watched by 194,603 spectators, a record for club tournaments. In 1969, the game between Brazil and Paraguay was officially attended by 195,513 people. The most massive outing was recorded in 1976, when more than 70,000 fans of the guests came to the match between the “Flux” and “Corinthians”. And on November 19, 1969, the arena saw the thousandth ball of the legendary Pele. In the seventies, “geral” – standing seats and benches behind the goal – was organized for underprivileged fans. Many mass events were held at the Maracana. Here Brazilians were blessed by John Paul II, and Frank Sinatra, Paul McCartney and Tina Turner sang.

In 1992 tragedy struck. Part of the fence of the upper tier collapsed and three fans died. An inspection showed deterioration of the concrete structures. There was talk of dismantling the arena, but in 1998 Maracana was declared one of the official symbols of Brazil. This made the stadium untouchable. In 2000 the reconstruction of the stadium began. The number of seats was reduced to 103,022 and Maracana lost its status as the largest arena in the world. Between 2005 and 2006 the stadium was brought in line with FIFA criteria. All the seats were numbered, and the “geral” was eliminated. Capacity was reduced to 82,238 seats, the ditch was removed, and the pitch was elevated and brought closer to the stands.

After another renovation the appearance of the stadium has changed a lot, only the facade has not been changed. The grandstands are 13 meters away from the field (formerly the distance was 30 meters) and hold 78,838 spectators. The grandstands are 95% under the new roof. The 17 elevators are installed, and now all fans can leave the stadium in 12 minutes.

The pitch is illuminated by 396 floodlights, four screens are installed. There are special seats for overweight people. There are 68 VIP boxes, restaurants and bars.

READ
The Shard Tower, The Shard skyscraper in London In front of the stadium there is a monument to Bellini, the Brazilian captain of the winning World Cup 1958 and the 1962 World Cup. There are busts of Mario Filho, Mario Zagalo, Garrincha and Zico on the Maracana. Many famous players have left their footprints and handprints on the Walk of Fame. Since 2006, there is a museum of soccer, its visit is free.

And now Maracana hosts various public events, and in 2016 it will host the opening and closing ceremonies of the Olympic Games.

The stadium has never been closed to visitors, even during the reconstruction. You can get to the soccer shrine from any area of Rio. Not far from the stadium there is a railway and metro station of the same name. Many buses go here, the stop is called Avenida Professor Manoel de Abreu.

On my first day in Rio de Janeiro, there was a rehearsal for the opening ceremony of the 2016 Olympic Games, where I was involved as a volunteer. Immediately upon arrival I went to meet this “temple” of Brazilian soccer. Despite the fatigue of two days on the road, the realization that you were in another hemisphere in the holy of holies of Brazilian culture was energizing and emotional. 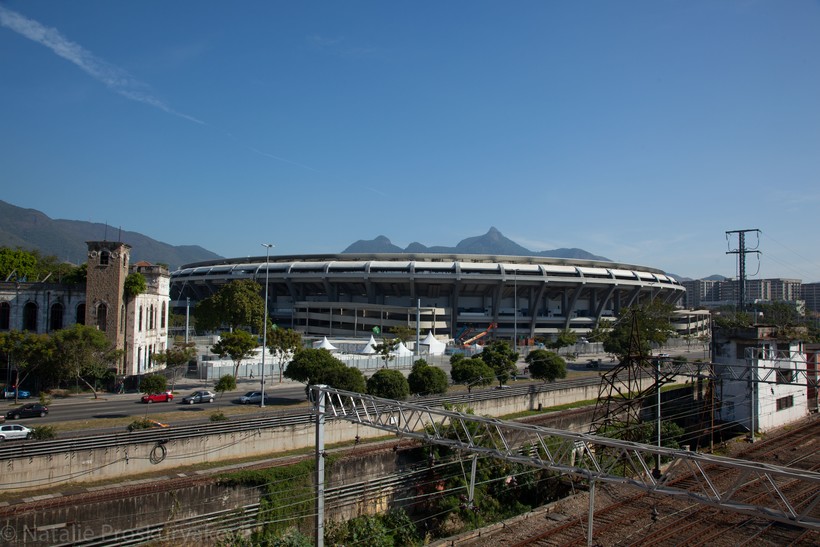 I arrived just in time for sunset, the lights of the favelas in the mountains lighting up. There were people around and decorations for the opening ceremony.

The Maracana Sports Stadium (emphasis in the last syllable) was once the largest in the world (today it remains so only in Latin America) and attracted huge numbers of fans. For example, a game in 1950 between Brazil and Uruguay went down in the Guinness Book of Records as the game with the maximum number of spectators – 199,854 people. But now the Maracana is not even in the top 50 in terms of capacity. 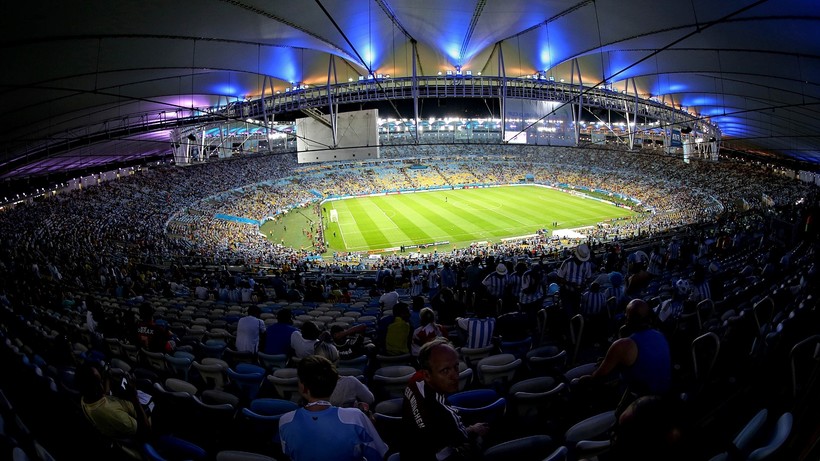 The fact is that originally the Maracana had a special place for the poor, called “geral”. Here, for a purely symbolic fee of one cruzeiro, or a dollar, one could watch a match standing up and discuss the game. The biggest soccer “experts” gathered here and there was a special atmosphere. But FIFA management banned standing seats, and after modernization for the 2014 World Cup the number of seats in the stadium is only 73,531.

READ
Lonely house on an island, lots of photos

The fate of the Maracana is linked with the FIFA World Cup in 1950, the first post-war FIFA World Cup hosted by Brazil. For this event, the country decided to implement an ambitious plan and build the largest stadium in the world. Soon matches began to be played here, but it took another 15 years for the facility to be fully completed. 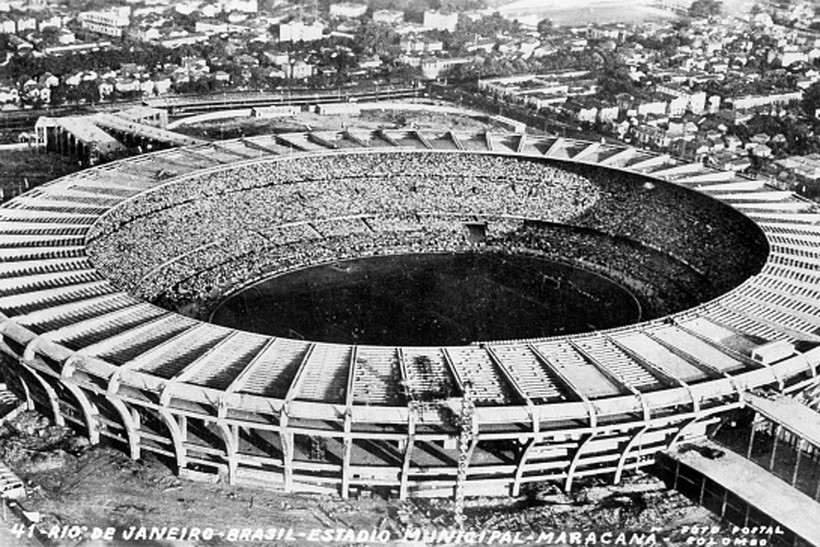 The life of the King of Brazilian soccer, Pele, is inextricably linked to the stadium. Here he scored the most spectacular goal, beating six defenders and the goalkeeper. It was also Pele’s dream to send his thousandth goal into the gates of this stadium, which he did by kicking a penalty kick. Unfortunately, for health reasons, the famous soccer player could not take part in the opening ceremony of the 2016 Olympics, where he was to carry the Olympic flag.

The temple of Brazilian soccer also hosted various landmark events. For example, the visit of Pope John Paul II. Madonna, Sting, Paul McCartney, Tina Turner, The Rolling Stones, Frank Sinatra and many other internationally renowned artists have performed here. Brazilians have a very special feeling for music and the concerts have a very festive atmosphere.

“You have to be very careful in Rio,” I constantly hear from Brazilians. Nothing bad has happened to me so far, but the advice is as follows:

Yes, if you have a ticket to the game, you can use public transportation for free four hours before the game and two hours after the game.

The easiest way to get to the stadium is by subway (line 2, green) or the Supervia train. Maracana stop/station. 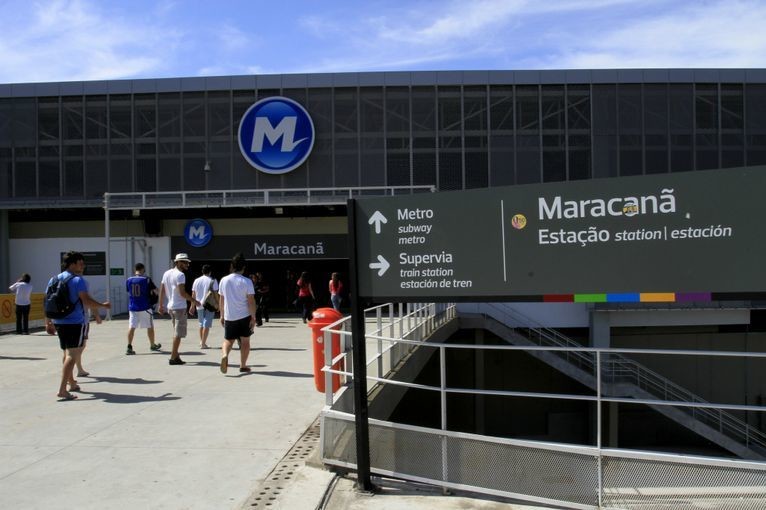 Pay attention to the signs.

Bus routes in Brazil are constantly changing. I was told to take number 606, but in reality it was number 353. 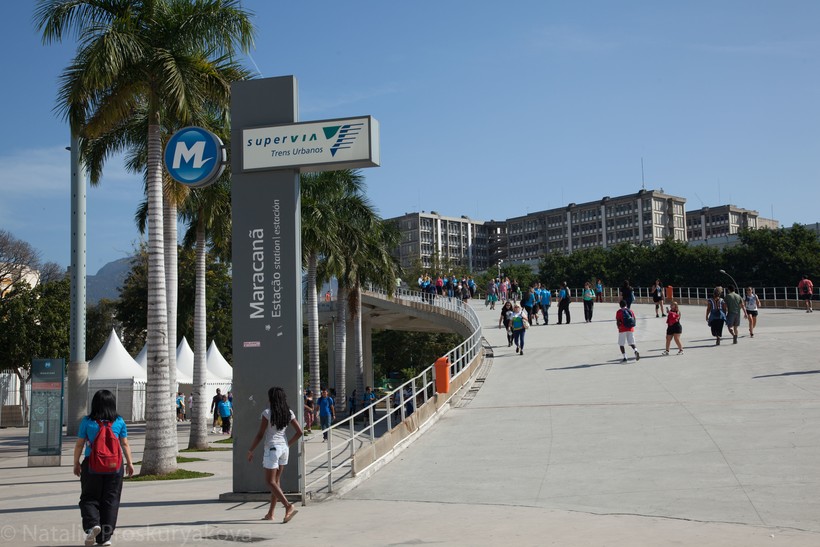 Always ask the driver (motorista): Você passa Maracanã? (“Are you going through the Maracana Stadium?”).

You can stop a cab driver or use Uber. The latter is much cheaper and more convenient due to the fact that the prerequisite for work in this company is knowledge of English. The government of Rio tried to ban Uber during the Olympics, seeing them as competitors, but they failed. Install the app on your phone. I paid 1 ruble to install it on my Phone.

There’s more than just a match to see at the Maracana. If you buy a ticket for the tour, you can look at the footprints of the great players and compare them to your own size. Or the handprints of goalkeepers. Cash desk is open from 8:30 to 17:00. Tickets cost from 6 € (20 BRL – Brazilian Real).

Currently, Maracana sightseeing activities have been suspended in connection with the Olympic Games. The exact opening time is unknown, tentatively in October 2016.

During the matches, the stadium offers snacks and drinks, both alcoholic and non-alcoholic.

According to FIFA standards, Maracana has 4 big screens, 230 toilets, 60 bars and a cafeteria. The seats are painted in blue, yellow and white and there is a good view of the pitch from every seat. Moreover, 90 seats are available for people with special needs, 85 seats for people with obesity and limited mobility.

This stadium was destined to occupy a great place in Brazilian culture. The country is hosting more and more world competitions. In 2014 the World Cup was held here, and in 2016 the opening and closing ceremonies of the Olympic and Paralympic Games will be held. 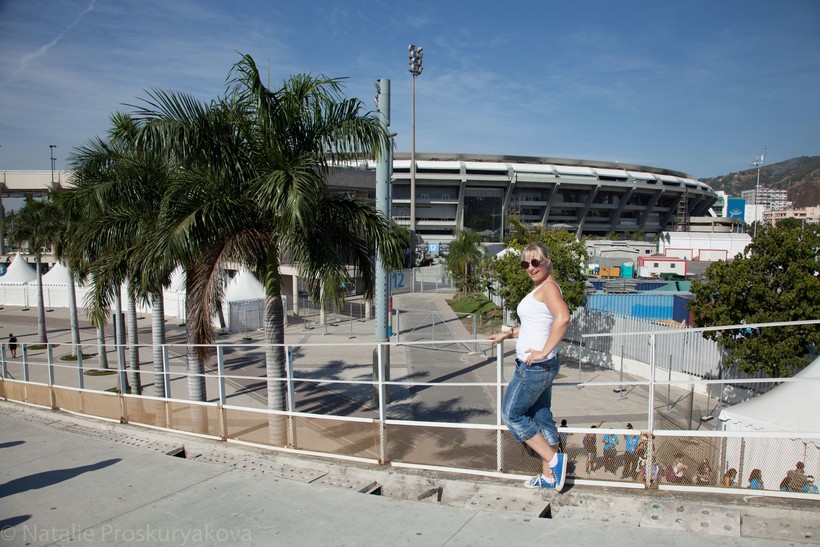 The Brazilians will cope with the role of the hosts and surprise the whole world. I know, I’ve been there ;).