In the deep blue of Lake General Carrera which lies between the two countries of Chile and Argentina, South America, lies one of the most beautiful sights, Las Cavernas de Marmol, which boasts many colorful and unusual shapes.

Lake General Carrera belongs to two countries, Argentina and Chile, each of them having its official name, in Argentina it is called Lake Buenos Aires and in Chile Lago General Carrera. Its area is 1,850 sq. km. and is located at an altitude of 217 m. above sea level in the Andes of Patagonia. It is the deepest lake in South America, its maximum depth reaches 586 meters, it is of glacier origin, the Baker River flows out of it and discharges into the Pacific Ocean. Lake General Carrera is a great place for fish, there are trout and salmon, of which there are countless.

But the most important and beautiful, which is visited by many tourists, are the picturesque Marble Caves (Las Cavernas de Marmol) or Marble Cathedral, which are located in the middle of the lake, near the town of Chile Chico, but the entrance itself and most of the caves are on the Chilean side. This magnificent labyrinth of limestone rocks, has three main grottoes – the Chapel (La Capilla) , the Cathedral (El Catedral) and the Cave (La Cueva).

The rocks are created by nature out of limestone rock – marble, and the three rock formations – Marble Cathedral, Marble Chapel and Marble Cave were once completely hidden under water. The caves themselves were formed over thousands of years of exposure to the waves that undermined the rock. Over time, the glacier that filled the lake melted, the water level dropped, and now such a wonder is available to you and me.

The limestone rocks are dominated by white, bluish, green, pink hues, which give the extraordinary beauty of marble rocks. Thanks to all this beauty Marble Caves visited by a large number of tourists who come up to them by boat, boat or even kayak, sailing through this bizarre maze, making the memory of the wonderful pictures of colored columns and walls of the grotto.

The Marble Cathedral is now under great threat because despite the fact that Marble Cathedral has been officially recognized as a natural monument, the Chilean government is planning to build a number of hydroelectric power plants here, while changing the direction of the rivers flowing into Lake General Carrera. This could lead to great negative consequences and damage both the wildlife and the local landscape, including the Marble Caves. But let’s hope that doesn’t happen after all.

The Marble Caves of Chile Chico in Chile

An amazing, beautiful and in some places unexplored world… Today more and more tourists prefer not to rest on the beach with a daily visit to the beach and night discos, but they choose to travel, which will remain in memory for years to come. Traveling around the world, we get an invaluable experience, immersed in previously unexplored cultures, cities and strange places, the creator of which is none other than the queen of nature. Such places make us realize the power and omnipotence of natural attractions. Such a place is undoubtedly the marble caves of Chile Chico. 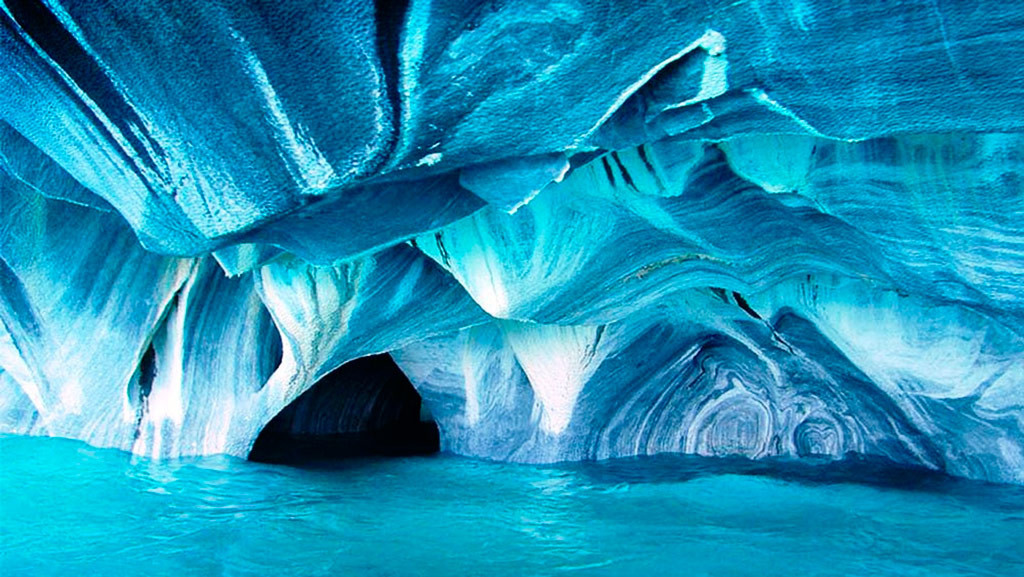 Where to find the caves

In the area where the border between Chile and Argentina runs, you can find an incredible lake. Heneral Karera is what they call it in Chile or Lake Buenos Aires. Located in a part of South America that is south of the local rivers, in Argentina and Bio Bio Chile, this beautiful place is located. However, the exact location of Patagonia still does not exist. Both names are official, which makes it possible to call the same lake by whatever your heart desires. The lake is considered one of the deepest in the world. This is not surprising, having such a size, even with the naked eye you can tell how big it is.

Immeasurably large, one might say endless, expanses of Heneral Karera are worthy to be called one of the largest lakes in the world. In terms of area the lake, which belongs to two states at once, covers more than 1,800 square kilometers, and its depth reaches 586 meters. 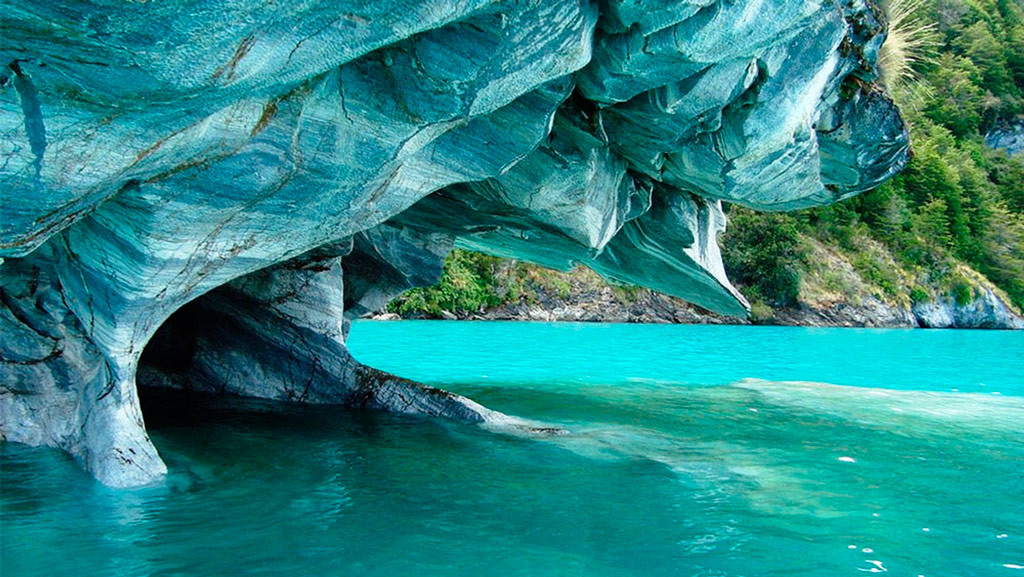 If you only think about the numbers for a second, you can understand that this lake could easily fit a state like Libya in its area. The lake is glacial in origin. It is carefully surrounded by one of the most powerful mountain systems, the Andean Cordilleras. The Baker River flows gently out of the lake and gently descends into the waters of the Pacific Ocean. Not far away is the small administrative center of General Carera. The village of Chile Chico is one of the most convenient places to reach the marble caves. 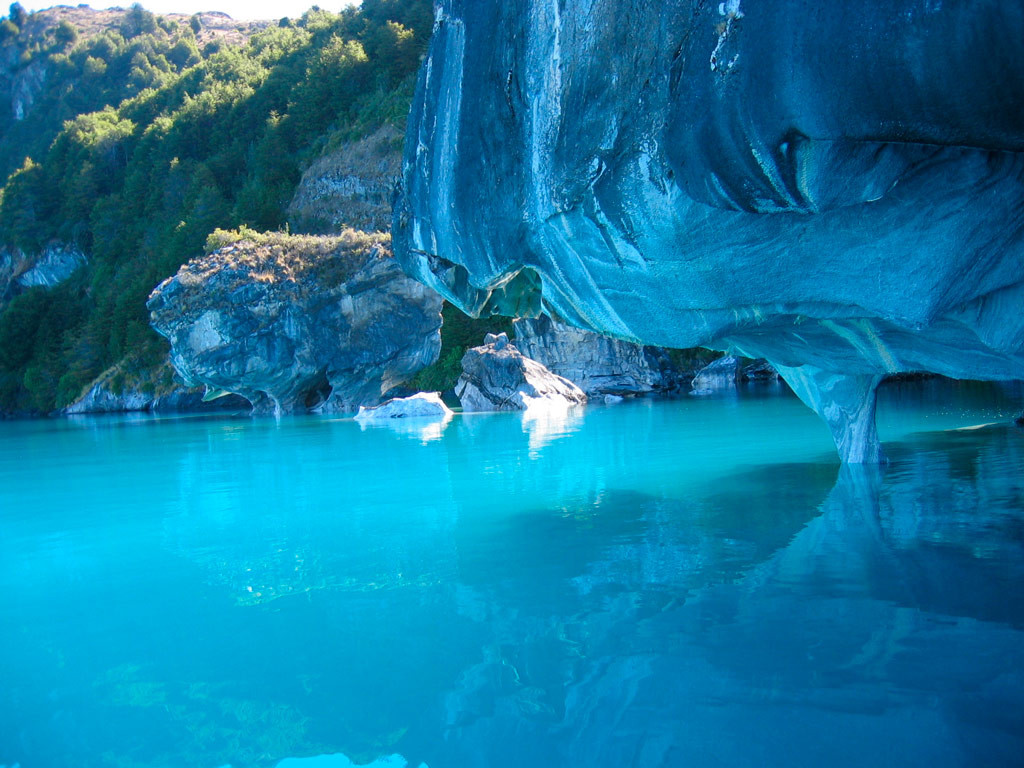 Initially, the marble caves, which are located in the depths of the lake, were completely inaccessible to man. A huge glacier was blocking the way, but then the glacier melted and opened a beautiful view of the marble formations in the lake.

If you have decided that you must see this beauty with your own eyes, you are an incredibly brave and adventurous traveler. The journey will be long, though very memorable. In order to get to the famous landmark of Chile is almost 2000 kilometers. Nature has carefully tried to hide the beauty of the marble caves from human eyes. After an incredibly long journey you will be well rewarded, and you can contemplate the heavenly creation of nature with your own eyes. 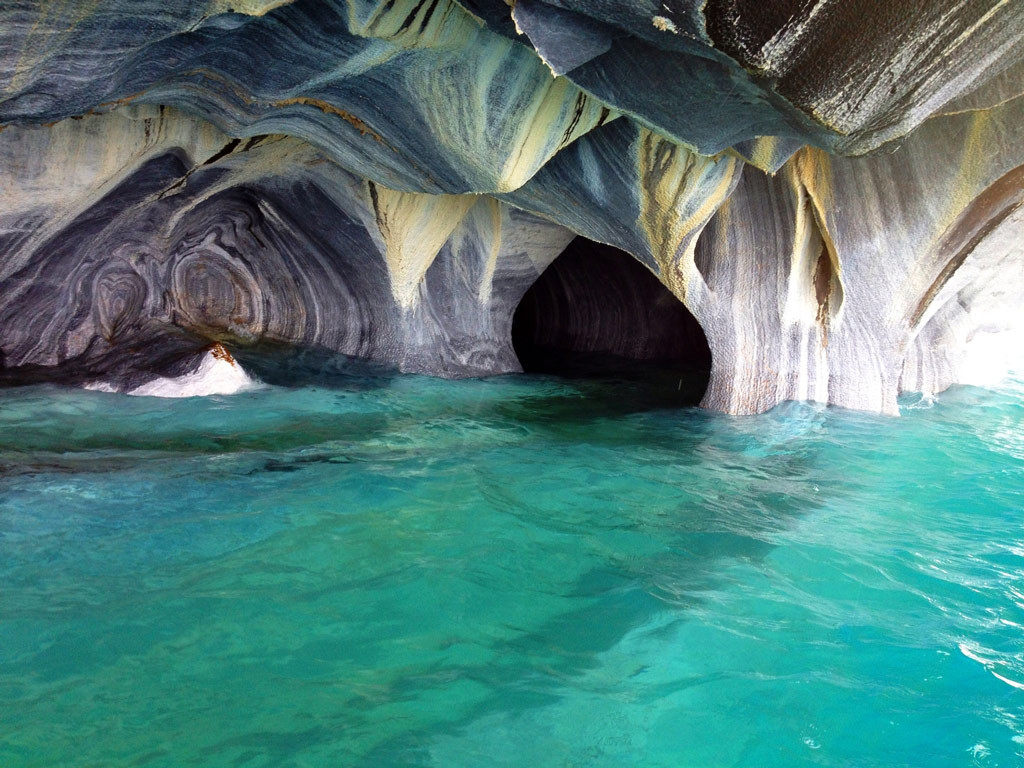 The first thing to do is to get to the capital of Chile, the amazing city of Santiago. Already here you will know that you made the right choice, having decided to travel through South America. Santiago is an incredibly beautiful and colorful city that will amaze you with its friendliness. After enjoying the local life, do not forget the original purpose of travel.

From the capital you must go to the nearest large city of Koyaike. It’s an imposing journey of 1,300 kilometers. But the local sights will not let you get bored on the way. At this stage the journey continues to gain momentum. Already from this city you are to take a bright and colorful way to the south. Only some 300 kilometers separate you from the coveted caves. But whether this distance can stop a true connoisseur of natural beauty. When you get to the village, which is located in close proximity to the lake, it is worth renting an SUV. This steel helper will be your faithful support in the further journey and will help you to get closer to the beauties of South America. 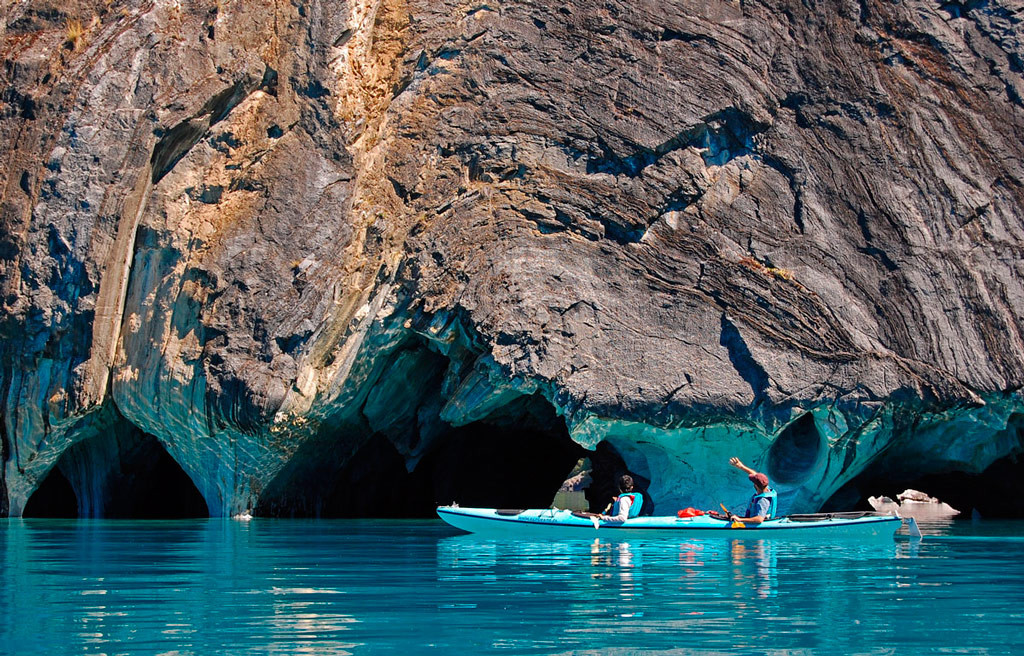 What is the place famous for

The reservoir is enormously popular all over the world due to the unique formations of the so-called marble. Local residents, as well as tourists who have visited these places, gave the name to these rocks – the marble caves. The caves look like labyrinths of incredible natural creations. The base of these caves is a calcareous peninsula located in the heart of Lake General Carera. If scientists are to be believed, these numerous caves and grottoes were formed due to the effects of currents over 6,000 years. 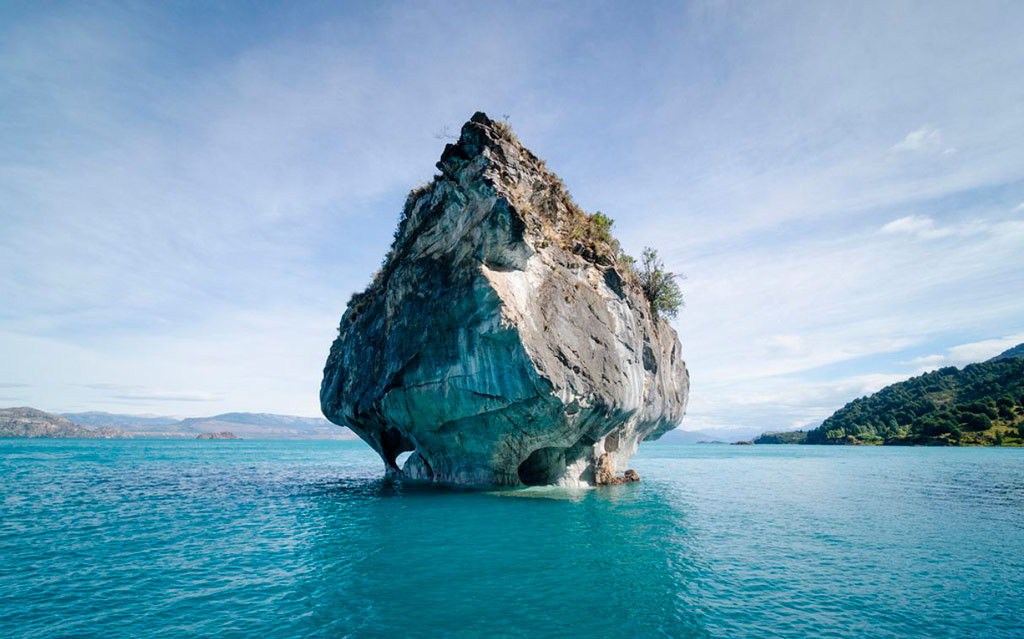 In fact, the marble caves got their name only because of their resemblance to a natural mineral, but in fact they are limestone rocks. But still, there is an opinion that certain caves remote from human eyes are made of the most natural marble. However, there is no reliable information confirming this fact. Perhaps it is just a legend, or maybe just a guess of the local residents, because no one has never been able to get to these caves, carefully hidden in the depths of the lake from the man. 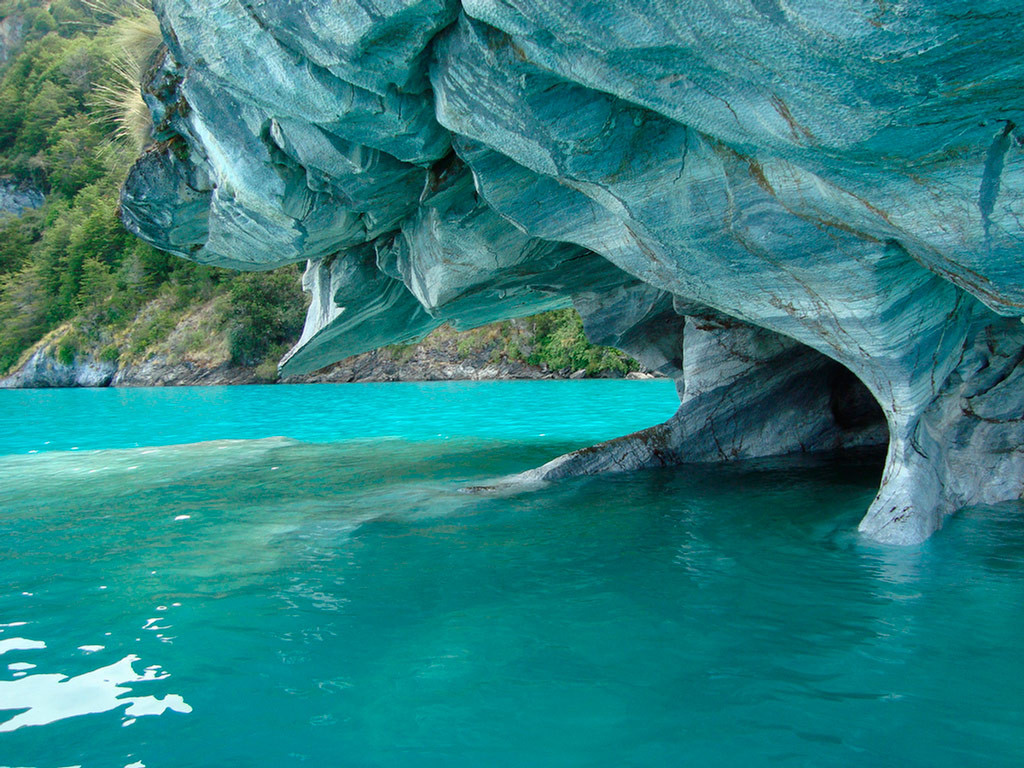 No wonder that such a beautiful place, like a magnet attracts people from all over the world. A large number of tourists visit the marble caves of Chile Chico every year. Especially for them in the city, locals have organized sightseeing trips on the lake. Numerous boats or kayaks go around the lake and offer beautiful views of the marble caves to all comers.

Here they delve into the incredibly beautiful and spacious passages of the caves. There, in the depths of the marble caves, everyone is given the opportunity to plunge into the boundless beauty of the labyrinths and feel themselves a part of a natural landmark. 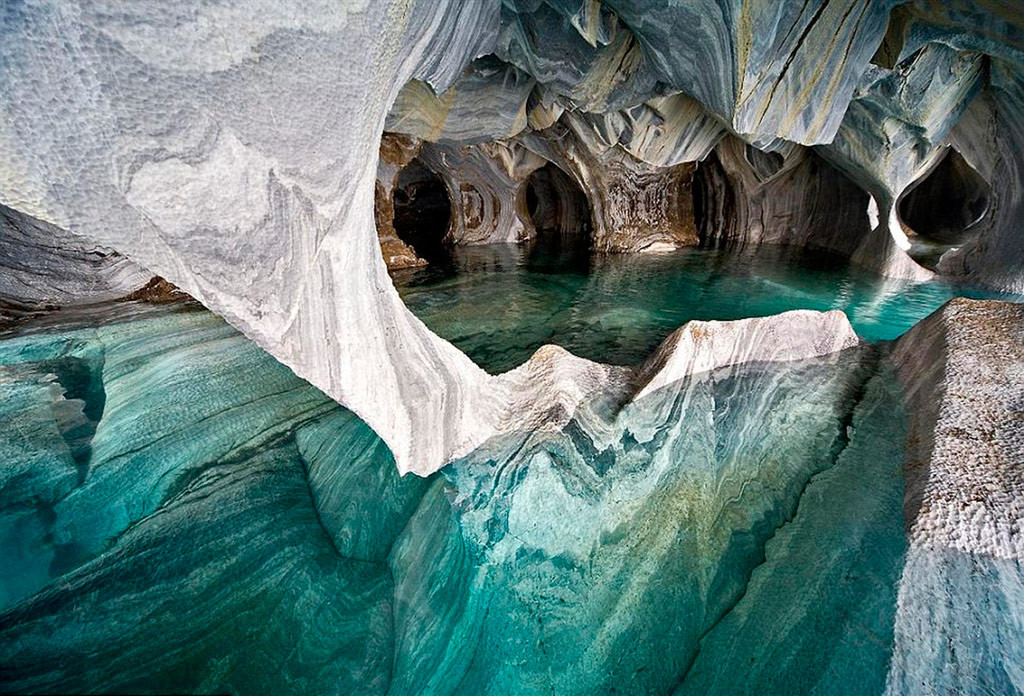 Popular places in the caves

The most favorite spots of tourists in the Marble Caves are rightfully considered to be:

Previously hidden under the power of a glacier, but over time the glacier melted and presented to the public an incredible creation of nature. The mysteries of the marble caves. Stored in the depths became accessible due to the fact that the water level of the lake has dropped significantly. Local residents are happy to introduce everyone to their attraction.

Marble Cathedral is a labyrinth of incredibly beautiful caves, as if taken from a fairy tale. Welcoming its visitors, this place is happy to introduce everyone to its beauty. Wade through the intricate tangles, which connect the multiple cave passages, you can exclusively by boat, all because instead of the usual land under your feet is a water surface of amazing blue color, as if the Pacific Ocean itself is reflected in the lake. For its beauty and appropriate color filling, this grotto is known worldwide as the Azure Temple. 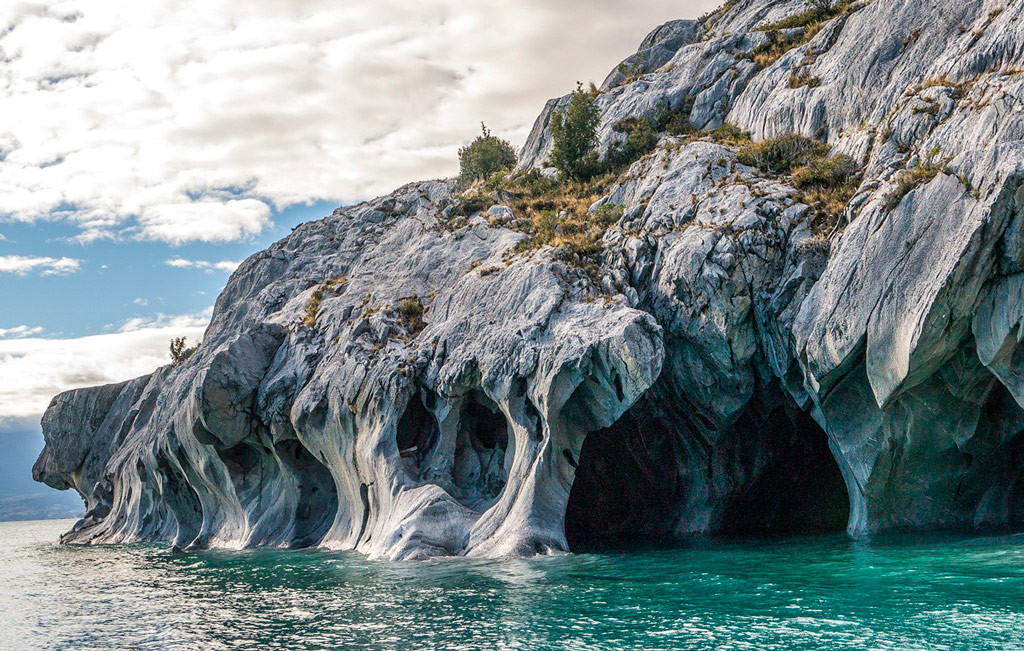 Those who have been in the caves of the azure grotto are certain that paradise on earth does exist. It is more on the water than on the land. The water in the marble caves of the grotto is so clear that you can see deep into the lake. If you set out on a clear sunny day to tour the caves, you will be unspeakably lucky because you will witness the sunlight entering the caves reflected in the water and covering the cave walls with all the different colors of the rainbow, filling every section of the cave with itself. At the moments when the sun fills the caves, they are transformed beyond recognition, and you feel as if you find yourself in another world that was previously a mystery under the seven seals.

Climate and best time to visit

The climate in this area of Chile and Argentina tends to be cold and humid, but the lake itself has a fairly warm microclimate. The best weather conditions for a walk in the caves is, of course, a sunny day, which is accompanied by absolute calm of the water surface. The choice of weather conditions for lake walks is directly related to the safety of your life. Choosing quiet and calm days you can as safely as possible enjoy the views of the marble caves and get the full range of unforgettable emotions from the unusual excursion.

I also recommend visiting Easter Island and seeing with your own eyes the world-famous statues.