Marmore Falls (in Italian Cascata delle Marmore, in English Marmore Falls) are famous not only for their beautiful view. It is the highest artificial waterfall in the world.

The Marmore Falls are located 7 km east of Terni, in the region of Umbria, in the center of Italy. It is the border between the rivers Velino, flowing from Lake Piediluco, and Nera at the foot of the falls. 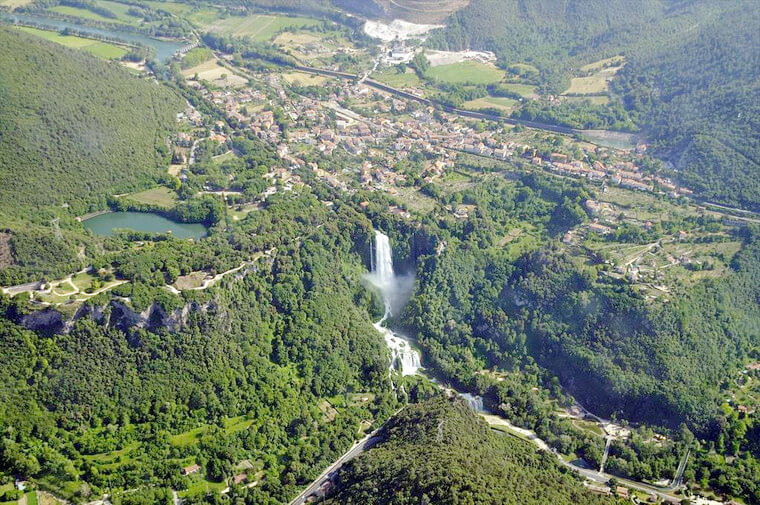 What is the Marmore Falls

It is a three-level waterfall with a total height of 165 meters, making it the highest artificial waterfall in the world. The upper level is the largest and most impressive. Its height is 83 meters.

Don’t miss the two highest natural waterfalls in the world. They are Angel Falls in Venezuela and Tugela Falls in South Africa.

History of the Falls

Who created the Marmoré Falls and why? It was created by the Romans in the 3rd century BC.

In ancient times, the Velino River created vast wetlands near the town of Rieti. They were considered a breeding ground for various diseases. To drain the marshes, the Roman consul Curius Dentatus in 271 BC ordered the creation of a canal to divert the river water into the rocks near the village of Marmore. This canal was called Curiano. The waterfall that formed there was named after the nearby settlement, Marmoré.

But the canal created another problem: the Velino River, flowing into the Nehru, began to threaten the town of Terni. As a result, the cities of Rieti and Terni argued about the canal for a long time. However, the problem was not solved for several centuries.

Gradually the canal became clogged and the marshes began to reappear. In 1422, Pope Gregory the Twelfth ordered work to restore the canal. This canal was called the Gregorian Canal or Rieti.

In 1545, Pope Paul the 3rd ordered the widening of the canal and the construction of a lock to control the flow of water. About 50 years later, after the work was completed in 1598, Pope Clement the 8th opened the canal and named it Clementine Hollow.

Since then, for nearly 2 centuries, the canal has been a real problem for the valley’s inhabitants, as the Nera River often flooded it. In 1787, Pope Pius VI ordered the architect Andrea Vici to modify the cascades of the falls. After the work, the waterfall got its present form. This structure solved most of the problems with flooding. 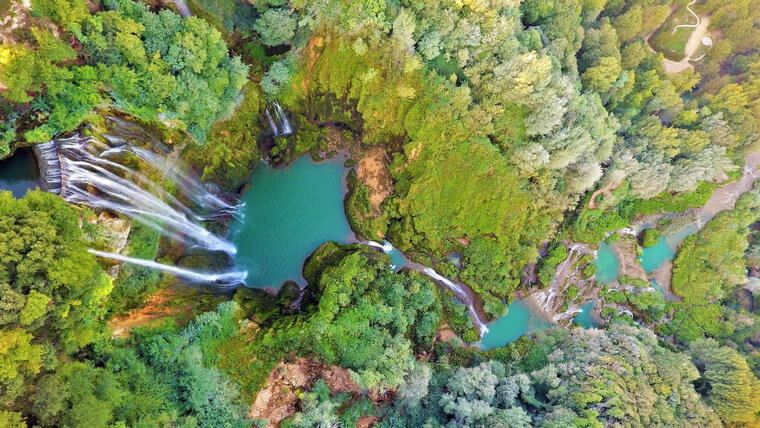 View from the top of the Marmoré Falls

The beauty of the waterfall itself and its surroundings naturally attracts many tourists. The falls were once one of the stops on the Grand Tour. That was the name given to the travel itinerary of the wealthy English through France and Italy in the 17th and 18th centuries in search of the ideal places for art, culture and the search for the origins of civilization.

These days, twice a day (12 noon to 1 p.m. and 4 p.m. to 5 p.m.) the flow of the Falls dramatically increases. This is due to the fact that a hydroelectric power plant is built on the Velino River. Exactly she discharges the excess of water during these periods, thereby increasing the power of the waterfall. Of course, it is far from the legendary Iguazu waterfalls, but it is still an impressive sight. It is not for nothing that tourists try to get to the waterfall during the release of water from the hydroelectric power plant.

It is noteworthy that during the holidays, the frequency of water discharge may be increased. Most of the time the water in the canals in front of the waterfall is directed to the Galleto hydroelectric power plant (built in 1929, capacity about 530 MW), so the flow in the waterfalls themselves is greatly reduced.

Normally the Marmoré Falls look like this But when the floodgates are opened, the waterfall becomes

The alarm is sounded before the water is discharged, then the floodgates open and the small stream becomes a full-flowing river, rushing down in cascades. 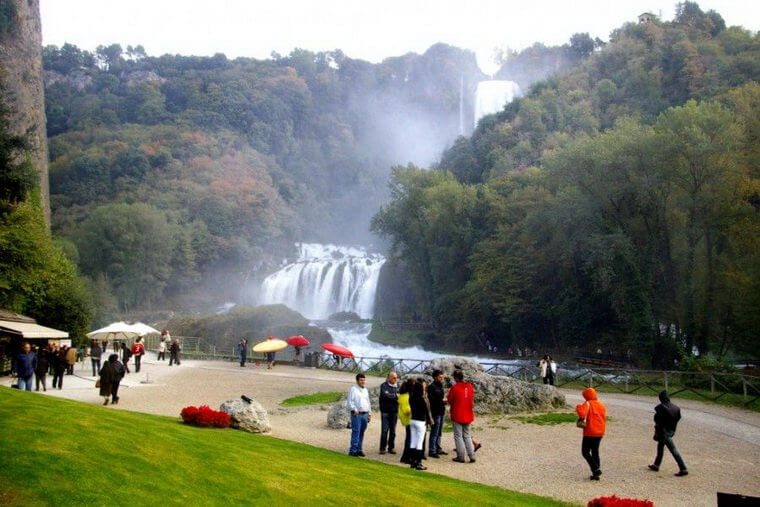 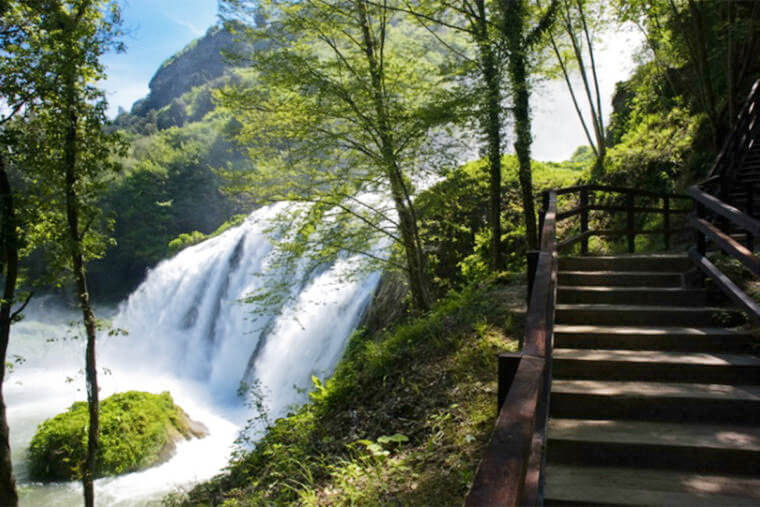 Trail to the top of the waterfall

Review: Marble Falls Cascata Delle Marmore (Italy, Terni) – An impressive spectacle in the center of Italy, or the largest man-made waterfall in Europe

Good day to all readers of the site Otzovik. I have written quite a lot of reviews about sunny Italy, but in this case it is difficult to reach the limit). So today I want to tell a little bit about another great, if not unique, place. It is located almost eight kilometers from the Italian city of Terni. 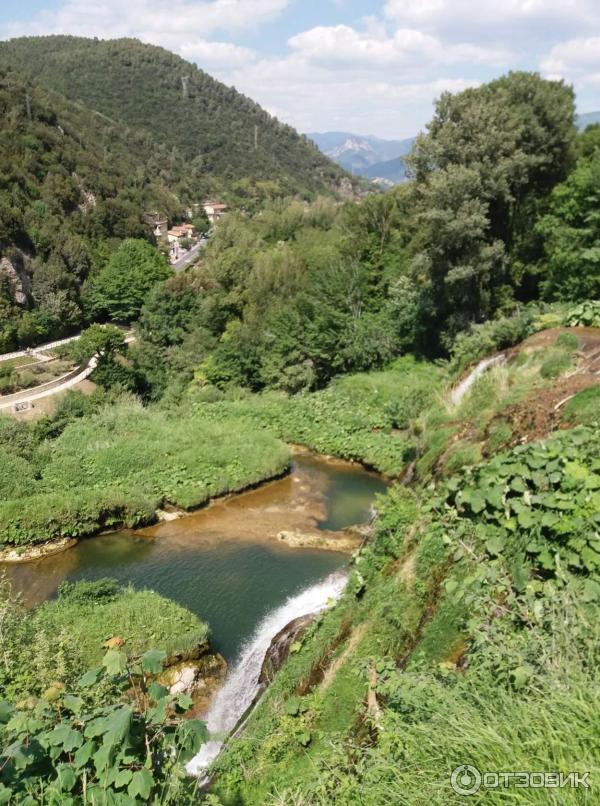 Marble Falls – the largest artificial (I prefer the word “man-made”) waterfall in Europe. 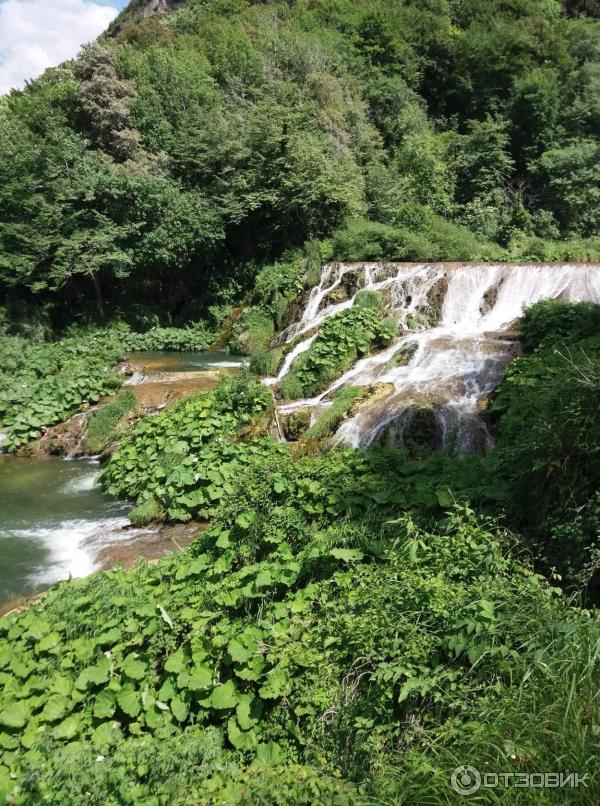 The cost of a visit is about five to seven euros per person. This waterfall is on a special schedule, at certain hours. But you just need to see and hear). 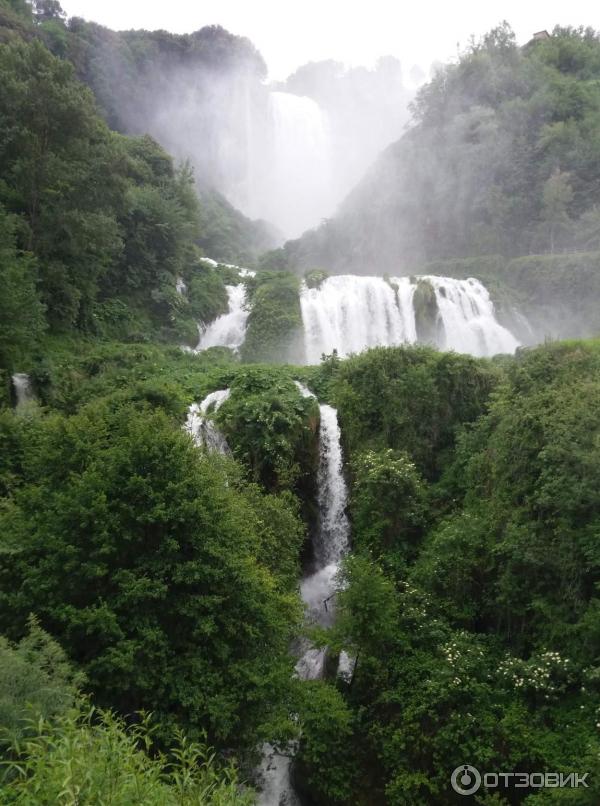 First there is a special sound signal and then the floodgates of the dam open and the water rumbles down. The height of the waterfall is one hundred sixty-five meters and consists of three cascades. The highest cascade is eighty-three meters. This waterfall, by the way, is the biggest natural attraction in Umbria (a region in central Italy, I also mentioned it many times in my reviews). 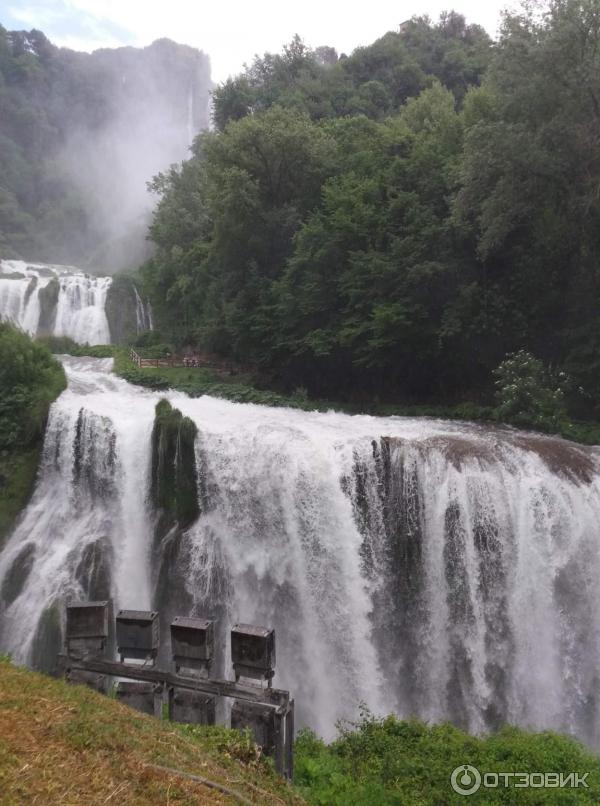 It’s just a breathtaking sight (and hearing)) – it’s very difficult to describe in words all the sensations that you experience when you are in the immediate vicinity of this place. It takes your breath away). And splash, splash everywhere. ) 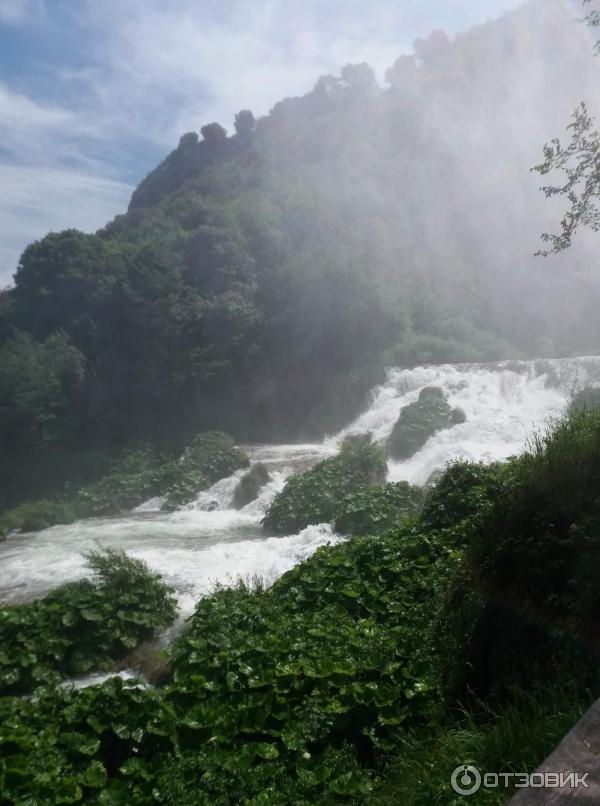 Well if you add a little more about the creation of this waterfall, we can say that the Cascata-Della-Marmore is located on the Velino River, a tributary of the Nero River. Once the river Velino did not have a characteristic channel and swamped – spreading out on the calcareous soil. And swamps are a source of epidemics and, therefore, a big problem. To prevent this (i.e. to prevent bogging), in the second century, the ancient Romans built a canal, but this, in general, did not solve the problem, because in high tide the city was under the threat of flooding, the canal was filled up and then dug again. It was only in the twentieth century that a hydroelectric power station was built on the Velino River. 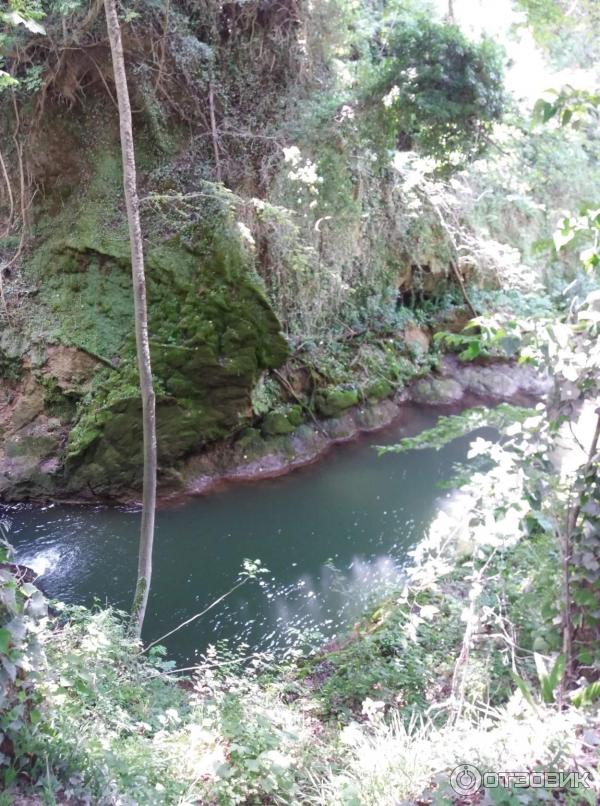 Marble Falls is about an hour’s drive from the very old town of Assisi I told you about. Who is not yet familiar with the place, – please read). And to visit, of course, in this town (it is very fond of foreigners) an excellent souvenir MaGaZin “Arti e Sapori”, by the way, who read – I added some new photos in that review (pasta-present (pretty pasta) and funny American women)).

I recommend that travel lovers see Marble Falls with their eyes (and hear with their ears)), especially if you are in the area. Of course, the air here is clean and the nature is excellent – naturally, I rate Cascata delle Marmore an A.