Marseille (France) – the most detailed information about the city with photos. The main attractions of Marseille with descriptions, travel guides and maps.

Marseille is one of the largest cities in France and the capital of Provence – Alpes – Cote d’Azur. It is the largest port of the Mediterranean, located in the south-east of the country on the shores of the Gulf of Lyon. Marseille is the oldest and most cosmopolitan city in France, which has an exuberant southern temperament. Its population is a fusion of several cultures: French, Italians, Spaniards, Arabs, Comorians. But it is this multiculturalism, vibrant urban life and some recklessness that makes Marseille such a charming place.

What to do (Marseille): 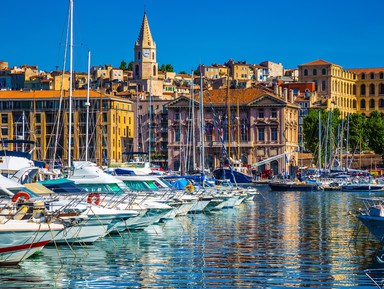 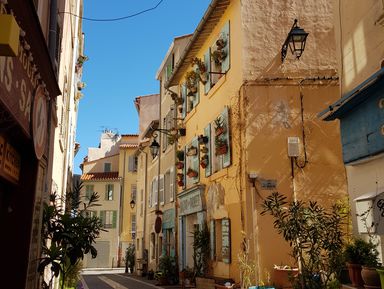 Truth and fiction about Marseille

Reject stereotypes and see the real capital of Provence with its many faces.

Marseille is located in southeastern France on the shores of the Gulf of Lyon of the Mediterranean Sea near the mouth of the Rhône. The city is located on the coastal hills. The surrounding area has many beaches and rocky coves (calanques). Marseille has a Mediterranean climate. Summers are hot and dry and winters are mild with occasional frosts. 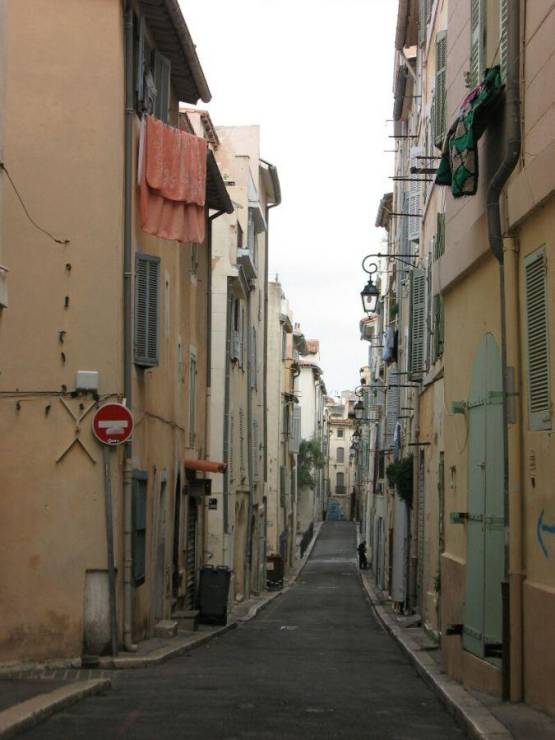 Marseille was founded in the 7th century BC by Phocian Greeks called Massalia. The settlement rather quickly developed into a thriving trading city that established factories all along the Mediterranean coast and the Rhone Valley. Massalia was later allied with Rome until it supported Pompey the Great in his conflict with Julius Caesar. After that the city was captured by Caesar’s troops, lost its entire merchant fleet and gradually fell into decay. 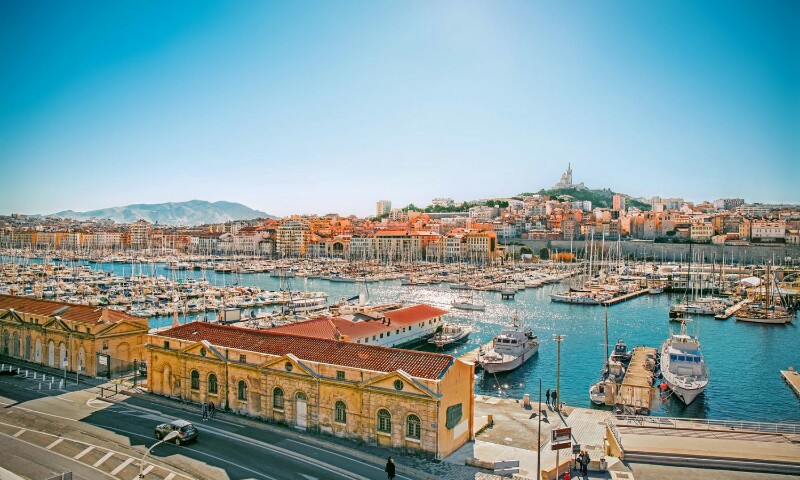 A new round of Marseille’s development and prosperity came in the Middle Ages. In the 10th century, thanks to the Dukes of Provence and the Crusades, the city once again began to play an important role in trade and transit cargo. In 1481, Marseille, along with Provence, became part of France. In 1720-1722, plague ravaged the city. During the epidemic, more than 50% of the population died. 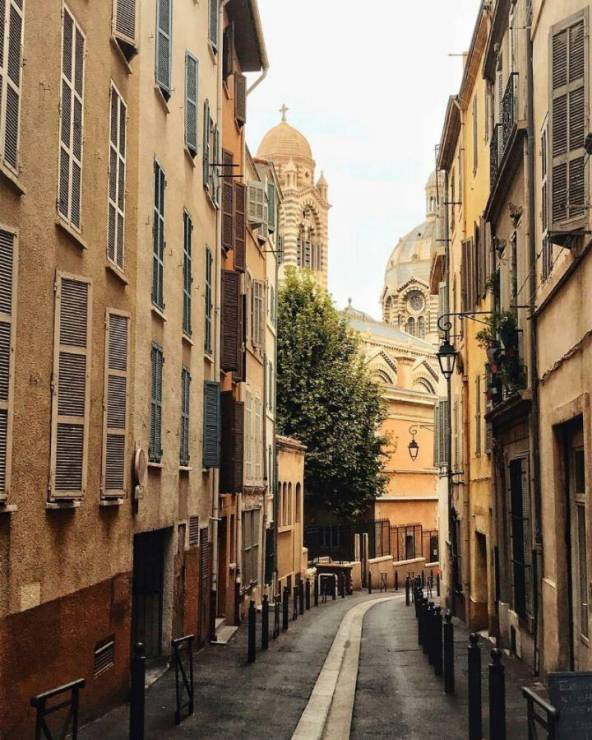 The streets of Marseille

During the French Revolution, Marseille supported the Republicans. So it’s no coincidence that the anthem of the French Republic is called “Marseillaise”. Marseille fell into decline again during the Napoleonic Wars. Later, the situation changed by the opening of the Suez Canal, which turned the city into the largest port in the Mediterranean. 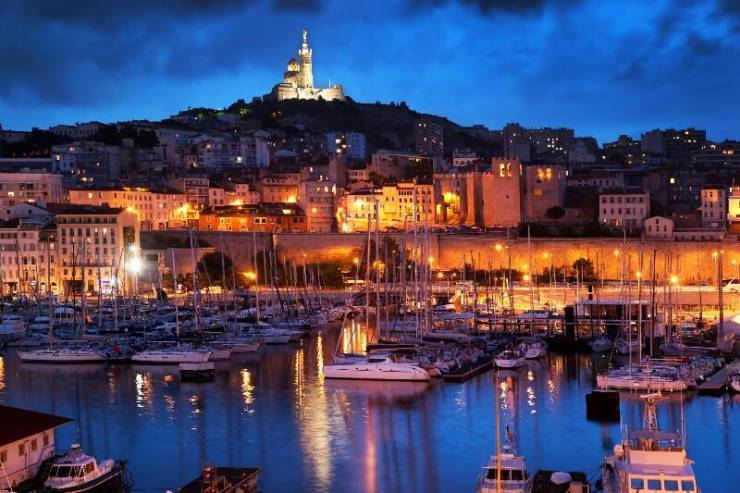 The Old Port is one of the oldest and most charming places of Marseille. This old harbor with its serene blue waters and hundreds of boats and yachts gives you the opportunity to feel the atmosphere of the city and to touch its history. Also the old port is one of the best places for walks and gastronomic adventures. This is where you can taste the most delicious and authentic bouillabaisse. 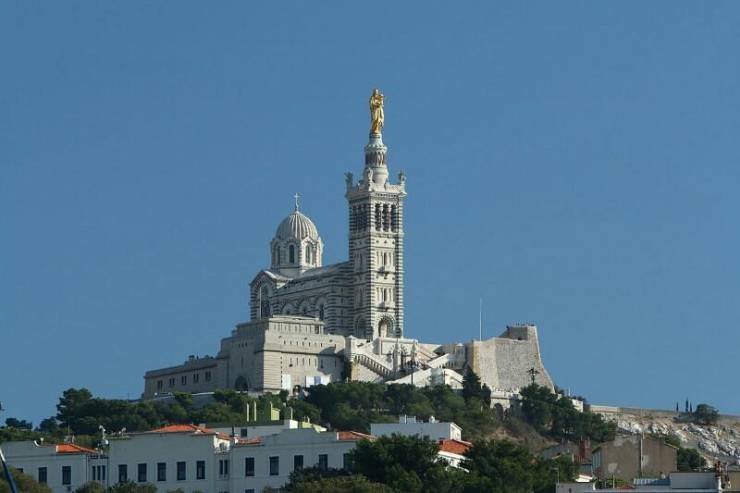 Notre-Dame de la Garde is an impressive neo-Byzantine style basilica that is one of Marseille’s most iconic landmarks. The church is built on top of a hill and can be seen from almost anywhere in the city. This hilltop was used in ancient times as an observation point, and a small church was built here in the Middle Ages. The Basilica of Notre Dame de la Garde has a beautiful marble facade (of white and green limestone) and a sumptuous interior. The top of the bell tower is crowned with a huge gilded Madonna. It also offers a stunning view of Marseille.

READ
Madrid and the mysteries of the city's sights 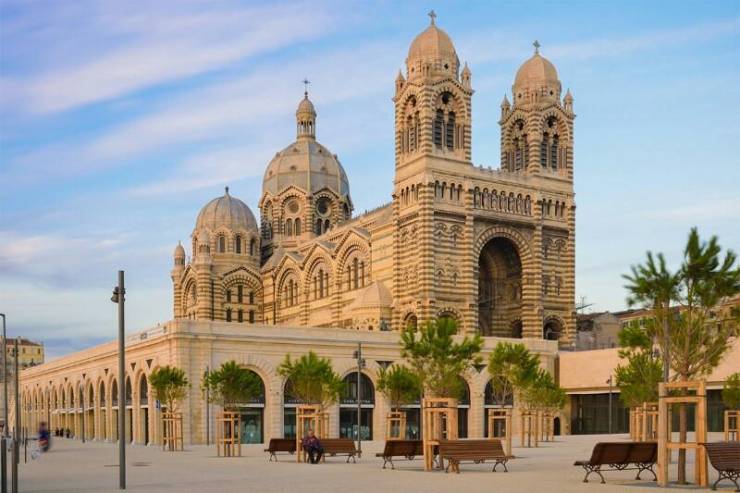 De la Mayor is a huge neo-Byzantine-style cathedral located in the northwest quarter of Le Panier. Built between 1852 and 1893 of a mixture of white and green limestone, the cathedral harmoniously combines Romanesque and Byzantine styles. The interior is richly decorated with marble and mosaics, and the crypt contains the tombs of the bishops. The Cathedral de la Mayor is one of the largest religious buildings of the 19th century. 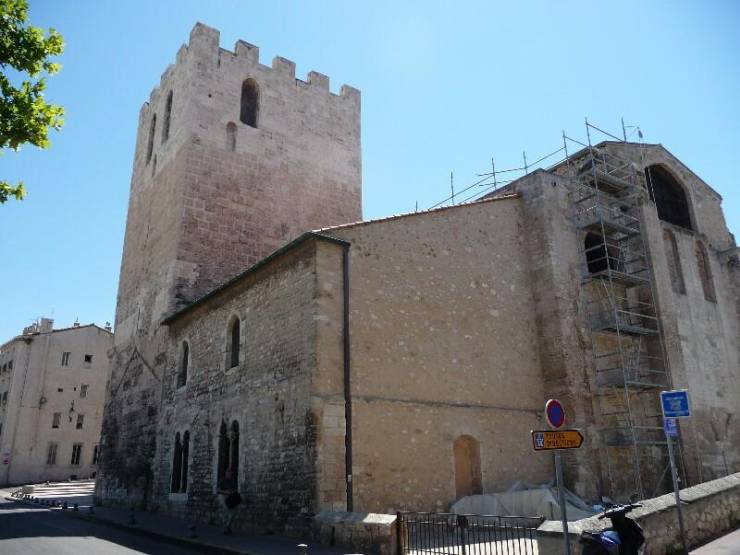 The Basilica of Saint Victor is one of the oldest buildings in Marseille, with origins dating back to the Carolingian era. The church was built on the site of an early Christian abbey and resembles a medieval fortress. The towers were added in the 11th and 14th centuries. 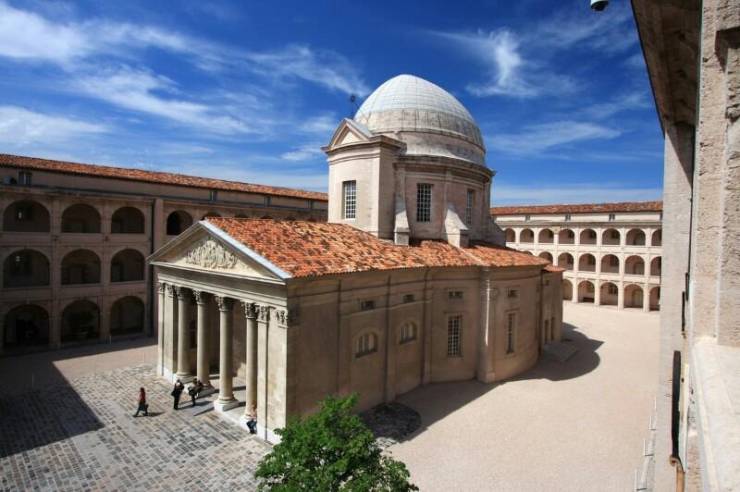 The Old Hospital (Vieille Charité) is a historic 18th-century building. In the center of the hospital complex there is a chapel built between 1679 and 1707, which is a fine example of Italian Baroque architecture. Nowadays it houses exhibitions of the Museum of Modern Art. 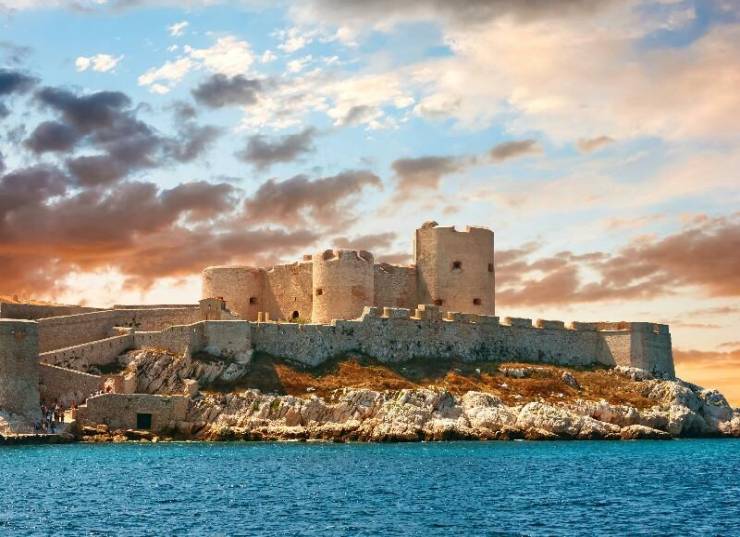 If is one of the most famous sights in Marseille, a powerful fortress on the island of the same name in the Friulian archipelago in the Mediterranean Sea. Located 4 km from the city and accessible by ferry that leaves from the old port. The castle of If is known for the novel by A. Dumas “Count of Monte Cristo”. The fortress was built in the 16th century during the reign of François I. Soon after, the fortification was turned into a prison. In the 17th century, the Huguenots (Protestants) were imprisoned here. The castle is now accessible to the general public. 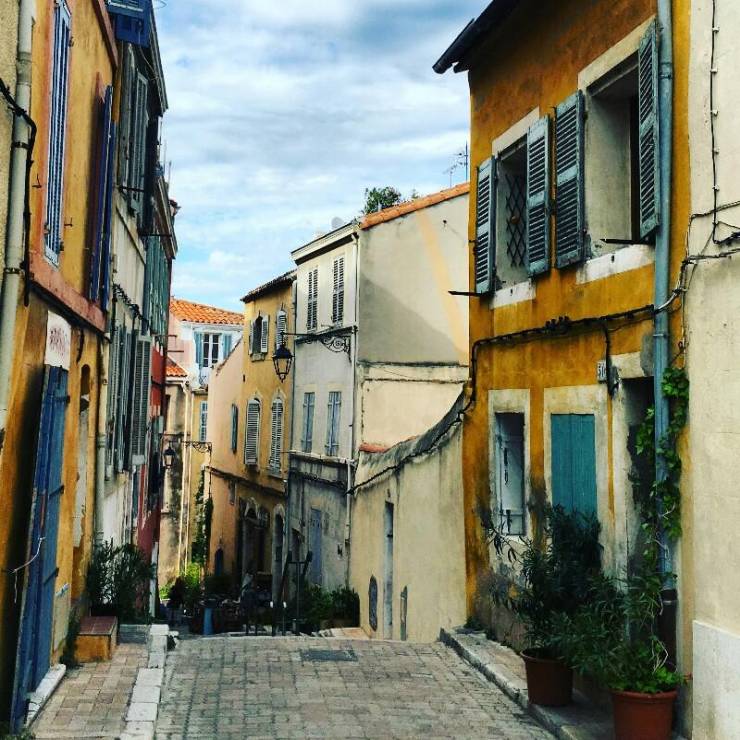 The old town (Le Panier) is a colorful old neighborhood in the hills above the old port. It is the historical and cultural center of the city, inhabited since antiquity. The neighborhood consists of steep, narrow, winding streets and quaint pastel houses, allowing you to experience the authentic feel of old Marseille. 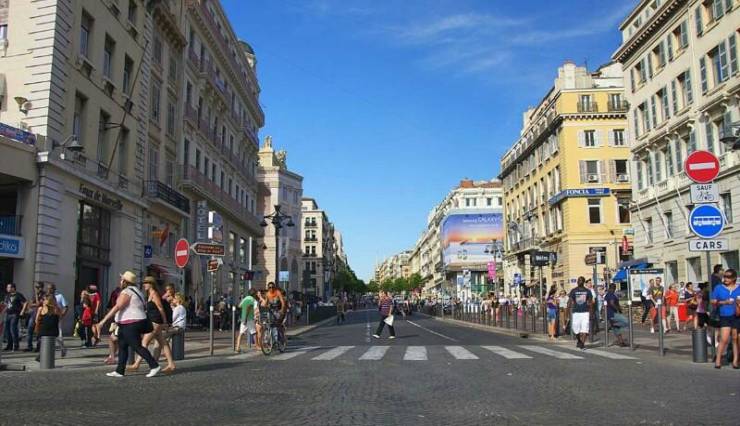 La Canebière is a lively boulevard and one of the main streets of Marseille, full of monumental 17th and 18th century buildings. 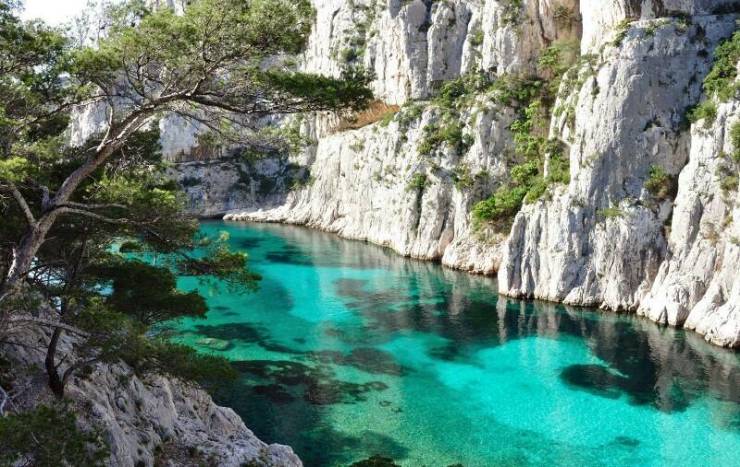 Le Calanques, the famous rocky coves on the outskirts of Marseille, with its beautiful scenery and turquoise sea. 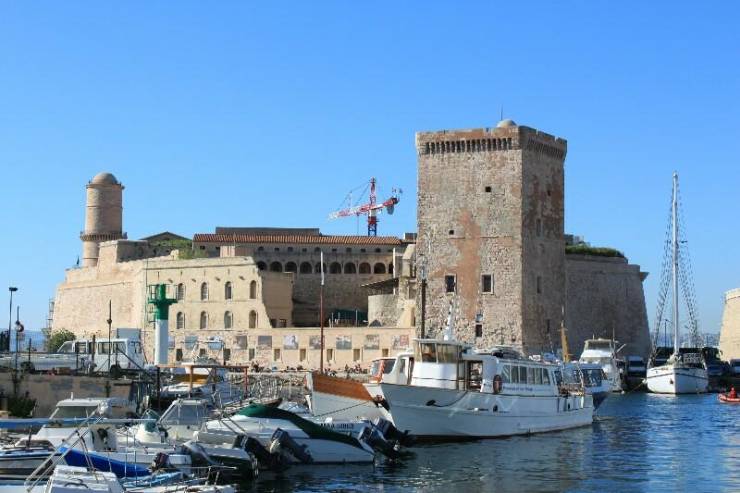 Fort Saint-Jean was founded by Maltese knights. The huge square tower to protect the port dates from 1423, the lighthouse tower from 1644. The fort itself was built by order of Louis XIV. 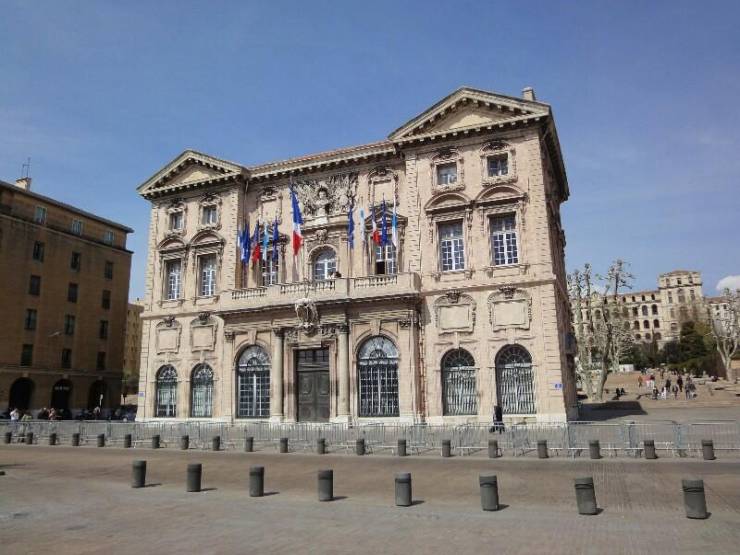 The town hall is a beautiful baroque building built in the 17th century. This place has been used by merchants since the 13th century. 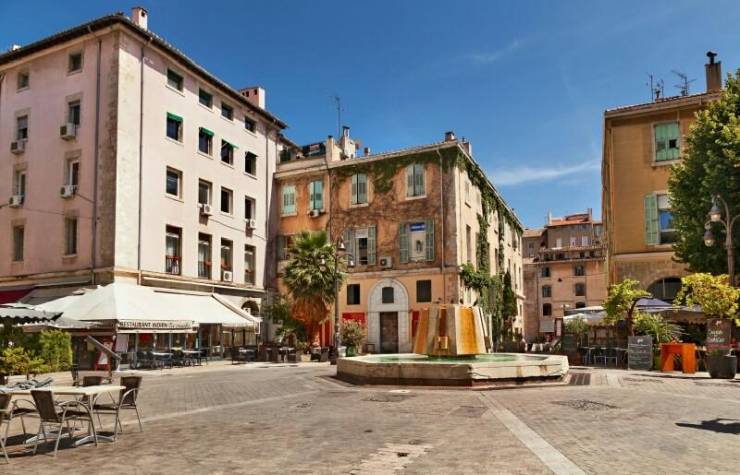 Place Thiars is a charming square located on the site of the old arsenal and warehouses. 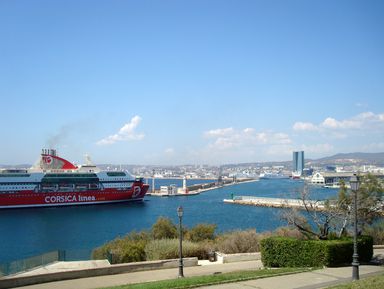 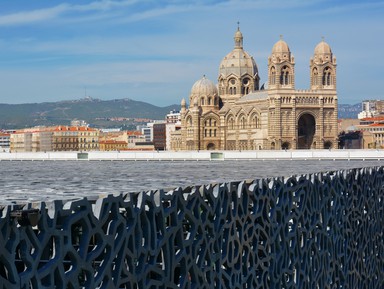 Love and fun about Marseille!

See, hear, and feel the colorful port city on a friendly sightseeing tour

Marseille on the map of France – all information 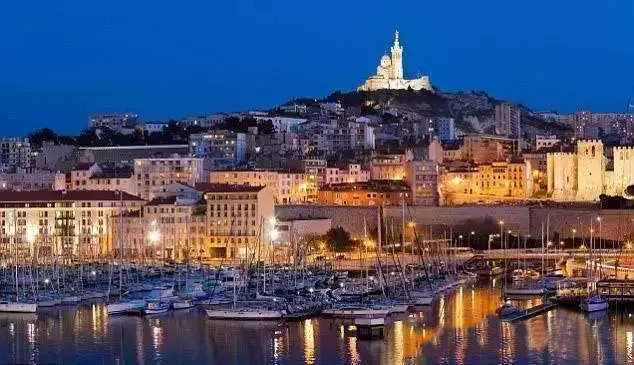 Marseille is the second most populous city in France (approx. 1 million inhabitants) and the largest port in the Mediterranean, the main economic center of Provence/Côte d’Azur. It was founded by the Phoenicians about 600 years BC, making it the oldest city in France. Since ancient times, Marseille has remained a large bay on which numerous waves of immigrants have crashed, making the French city a mix of all kinds of cultures and nationalities.

Is it worth going to Marseille?

If you’re expecting a romantic and clean France, with roses and cozy street cafes, you shouldn’t go to Marseille. Marseille is a huge port city – and it says a lot! Many tourists get the impression that Marseille is a dirty, noisy and not at all safe city, and some like the real life and vibrant mix of cultures.

But even if you don’t like noisy crowds and suspicious immigrants, don’t miss the opportunity to admire the beautiful scenery of the Calanques – picturesque cliffs, reaching steeply into the sea, located in the suburbs of Marseille.

And for those who visit the city itself, you should certainly taste the real bouillabaisse (thick soup made of fish) – a specialty of Marseille. This is where it is best made! 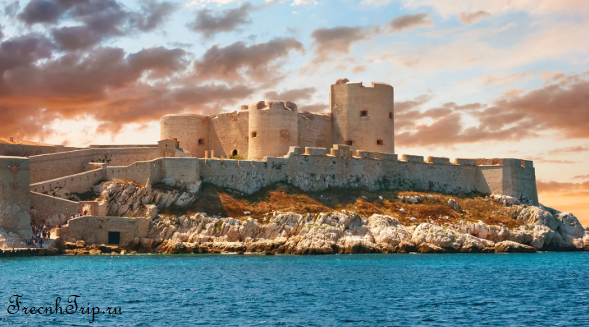 How to get to Marseille:

The main railway station in Marseille is Gare de Marseille-Saint-Charles. It is well connected to the rest of the city as two metro lines and many buses stop there. It is within walking distance of the Canebières and the Old Port. Remember that the station is located on a small hill: if you decide to walk to the station, you will have to climb a series of steps, which can be difficult with heavy suitcases. To avoid the stairs, follow the path to the left of the steps until you reach the bottom floor of the station, then take the escalator. 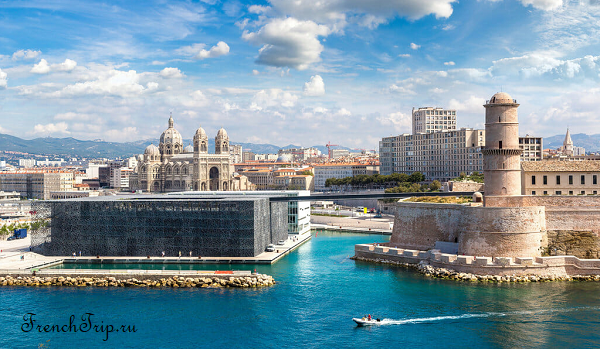 What to see in Marseille:

Marseille, founded by the Phoacians 600 years BC, is the oldest city in France! The city developed through a real mix of cultures around its old port (Vieux-Port), protected by two forts, Saint-Nicolas and Saint-Jean. An important trading port in antiquity, Marseille is still the first French port. Since its creation, the Mediterranean city has had an important cosmopolitan atmosphere due to its openness to the Middle East, Southern Europe and North Africa. This mixture is found everywhere in the city’s architectural and cultural heritage.

READ
Berchtesgaden in Germany, all sights

The old port, the heart of the city, is a must-see for the fish market and the lively promenades, especially in the evenings when there are soccer matches with the city’s team, Olympique de Marseille. Here you can also sample Marseille’s signature dish, bouillabaisse (fish soup). The famous Canebière street is also very popular.

The very picturesque Panier district boasts typical tall houses with colorful facades and washed laundry fluttering on ropes. Some facades are adorned with beautiful antique store signs. The Vieille Charité, the hospice which now houses the Mediterranean Archaeological Museum, and the Hôtel Dieu are beautiful buildings of old Marseille.

The Basilique Notre-Dame de la Garde, built in the 19th century, towers 162 meters above the city. Its square offers a panoramic view of the whole of Marseille and its surroundings!