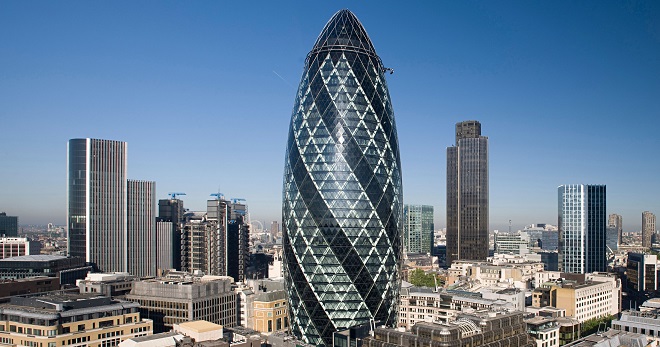 The Mary Ex skyscraper in London is perhaps the most recognizable architectural landmark in the capital after Big Ben. This tall glass building has an unusual shape – elongated and rounded, for which Londoners called the Mary Ex skyscraper “Cucumber” (“Gherkin”), which in English sounds like “Gherkin”.

St. Mary Axe is one of the oldest streets in the City of London. For years the site of 30 Mary Axe Tower was occupied by the Baltic Exchange until it was bombed by IRA terrorists in 1992. The historic building was so badly damaged that there was no point in rebuilding it. A chic place became available, and British developers immediately began to apply for it. In the end it went to the Arup Group, which contracted the Swedish firm Skanska to build the unusual skyscraper in the form of a London gherkin. The tower was opened in April 2004, and the first office of the Swiss insurance company “Swiss Re” moved in, which today occupies most of the space of the building. The name “cucumber” stuck to the skyscraper immediately, because nothing similar had been built in London before, and the building impressed the citizens with its design. 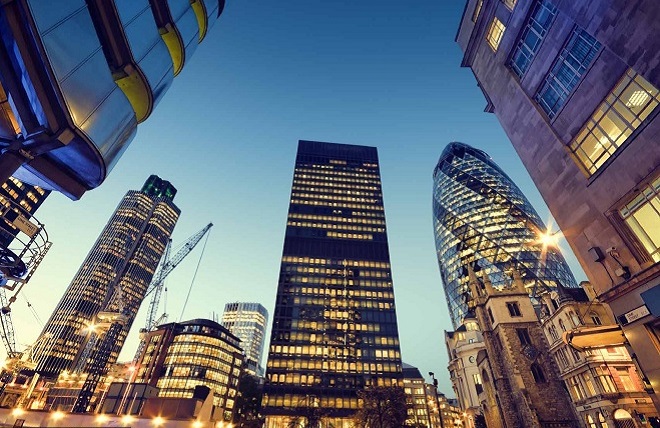 Interesting facts about the Mary X building in London

Among the curious points worth mentioning are the following:

It’s not a touring place; it’s home to privately owned offices of large companies. You can only get in if you work for one of them or cooperate with them. Also, visitors to the restaurant located on the top floor can go inside. Another option is to visit a skyscraper as part of the Open House London project, which opens the doors of the city’s best buildings to visitors. This happens once a year, in September, and it is advisable to book the tour in advance. 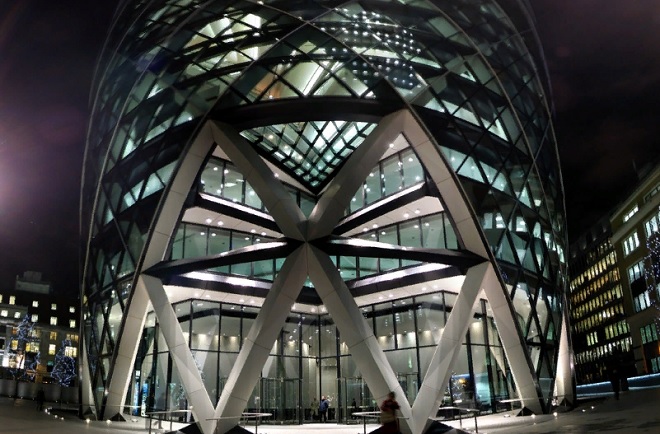 Restaurant in a skyscraper

Helix Restaurant and Iris Bar have been operating on the 39th and 40th floors of the tower since it opened. Both places were renovated in 2018 and now not only have an ultra-modern design, but also an extraordinary menu. The chef uses only local, seasonal produce, such as Dorset crabs, Welsh lamb and salmon. The average check will start at $70 per person. The Iris Bar is open from 11 a.m. to 11 p.m. and offers gourmet champagne, English sparkling wine and a huge selection of cocktails. But all this gastronomic diversity pales in comparison to the views that open from the windows of the establishments. Mary Axe Tower is a 360° panorama of London that is second to none. 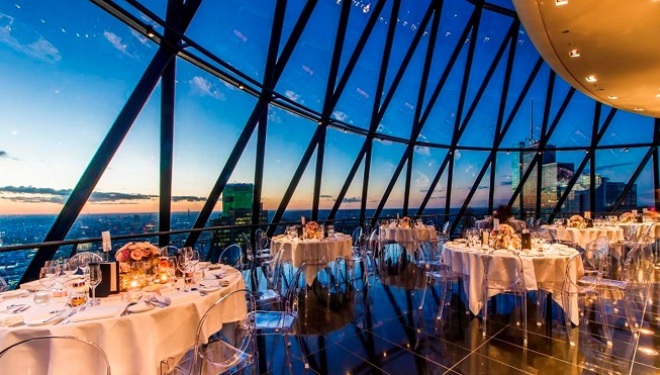 The closest subway stations to 30 St Mary Axe are Liverpool Street, Aldgate and Bank. There are also 12 bus routes nearby. A visual tour of the Mary Axe skyscraper is part of most sightseeing tours of London.

London, like any capital city, and certainly as huge and famous as the capital of Great Britain, is famous for its skyscrapers. Many of them are rightly considered real works of art, and some have even become a symbol of the city in which they are.

One of these, of course, is the Mary Ex skyscraper in London, which many call a “cucumber” (The Gherkin) for its unusual shape. And that’s the name it’s known by all over the world. Since I’ve heard a lot about this building and I often saw it in postcards from London or as an illustration for some articles, I, of course, decided to find the skyscraper and admire it closely. 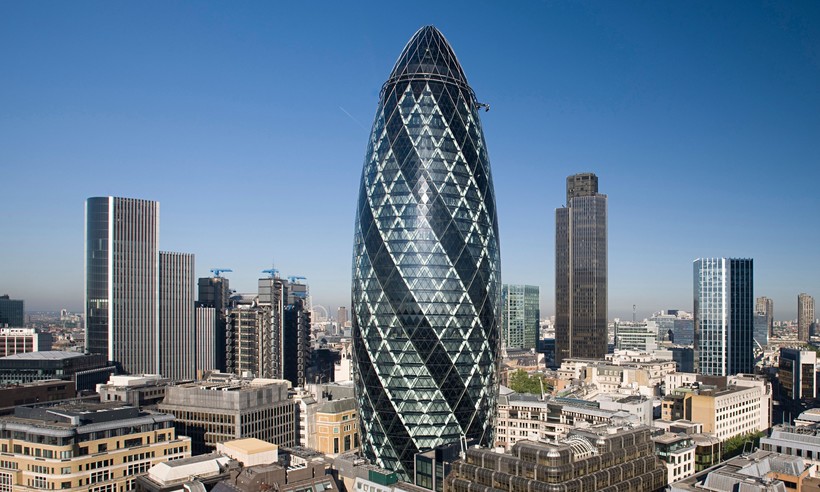 You can find the Mary Axe skyscraper in London at 30 Saint Mary Axe in the City of London. It’s almost the center of the city, so there’s a wide variety of transportation. There are several ways to get to the famous “cucumber”: 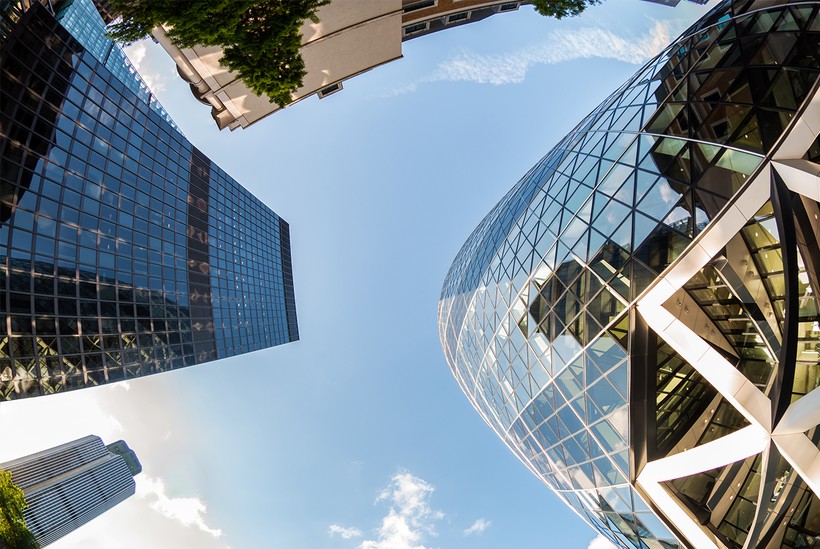 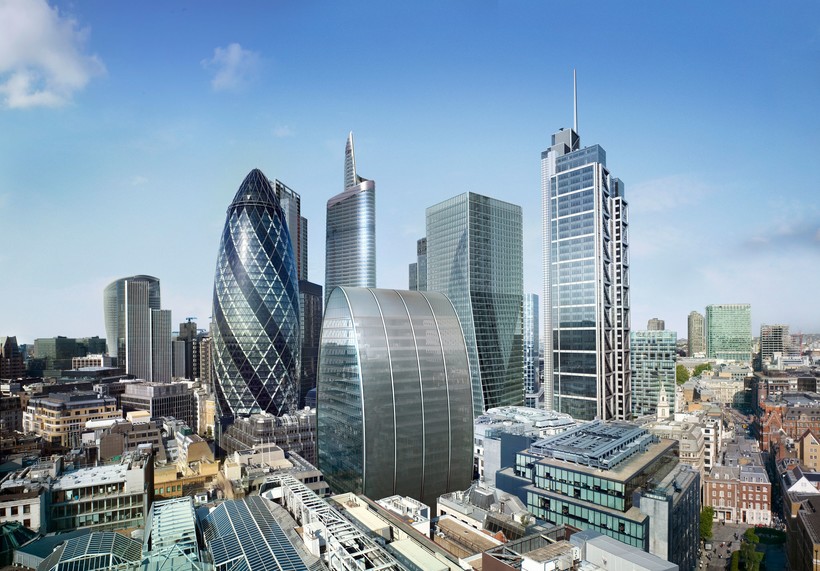 A tour of history

The history of the Mary Axe skyscraper dates back to 2001, because that’s when the construction of the building began. Its main architect was Norman Foster – one of the most famous architects of our time, winner of the Imperial and Pritzker prizes. The high-rise is considered to be an ideal candidate for the title of ecological skyscraper. According to its architectural design, the operation decided to use natural ventilation and solar lighting instead of electrical equipment whenever possible. This helps to ensure that the building uses about half as much electricity as similar skyscrapers. 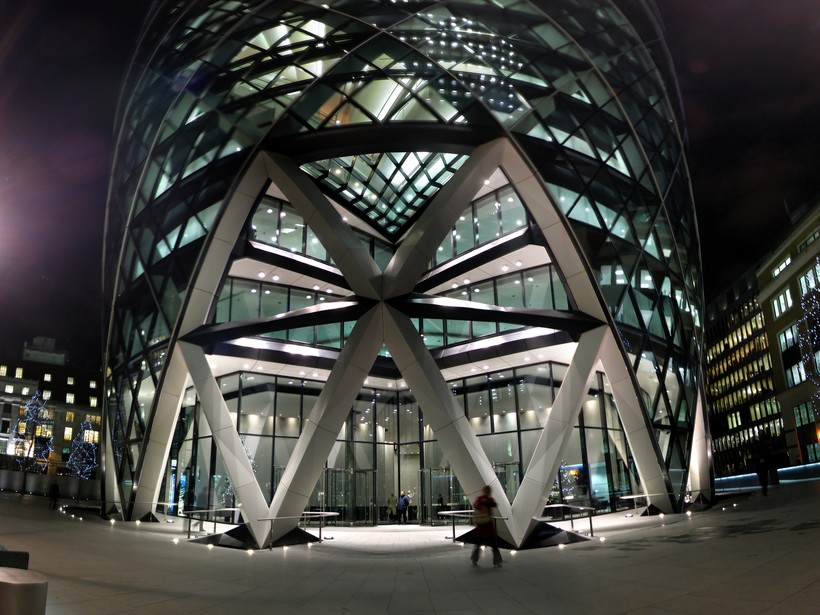 Once upon a time, the Baltic Exchange stood on the site of Mary X. In 1992, however, misfortune struck: there was a terrorist attack in London, and the building was badly damaged. Subsequently, the stock exchange moved to a nearby building, and almost ten years later an unusual high-rise building called Mary Ex was erected on that site. 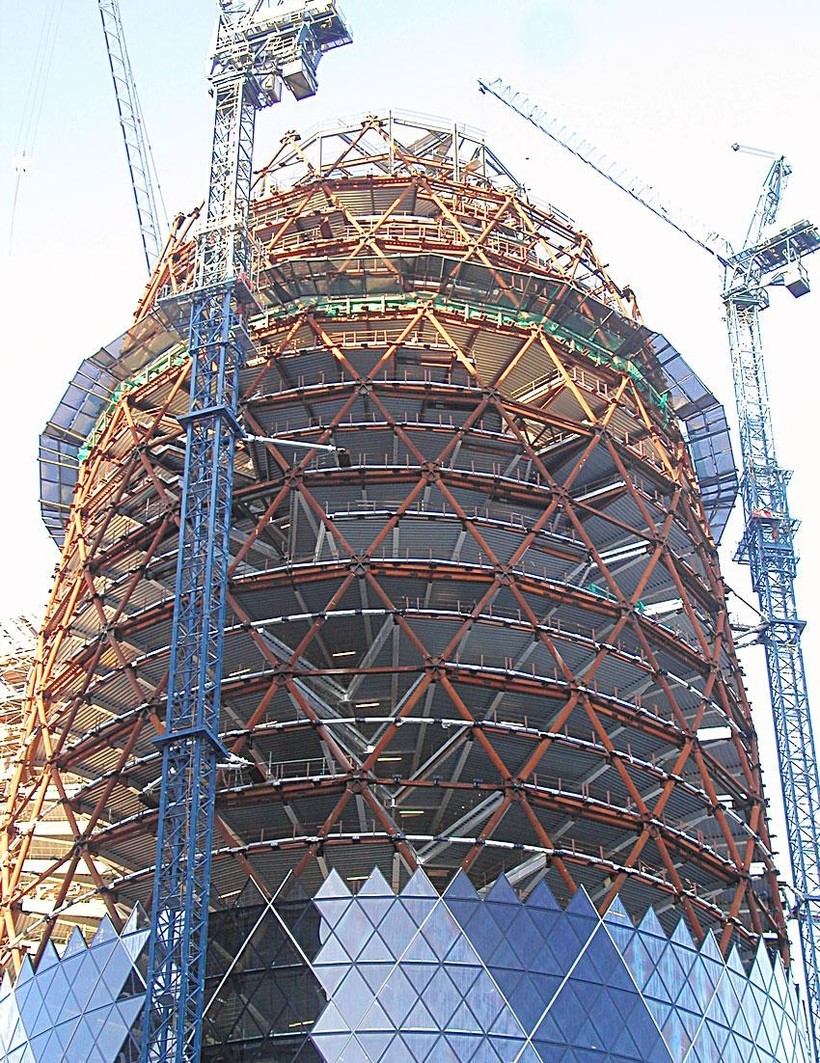 The skyscraper was under construction for three years. And even a year before its official completion, it had already received an award: the Emporis Skyscraper Award, which is given to the best skyscraper in the world. A year later the skyscraper received another round of praise as well as the James Stirling Award, one of the most prestigious in architectural circles. This decision was made by the Royal Institute of British Architects (RIBA). 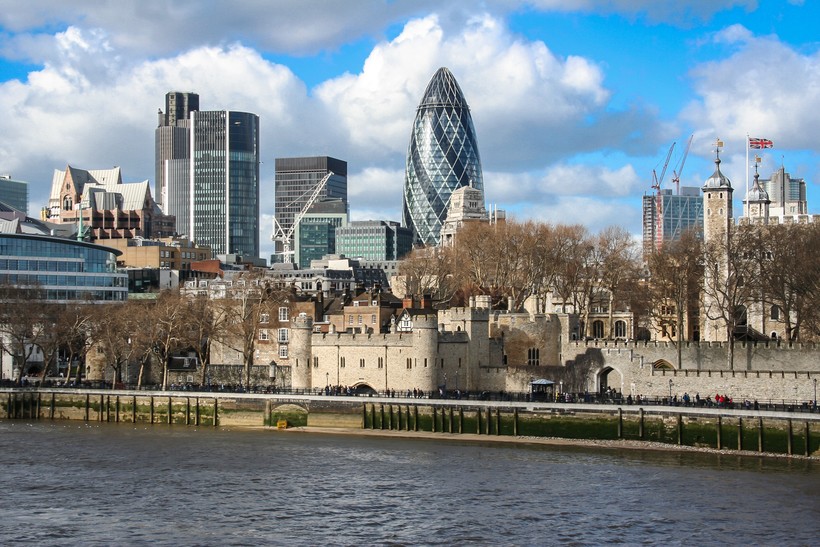 It must be said that the construction of the skyscraper was not easy for Norman Foster. During the design phase the height of the skyscraper was shortened by 50 meters and it was initially planned that Mary Axe would rise to 230 meters instead of 180 meters. However, after calculations it was decided that such a height would not meet the weight standards, and it could cause the building to collapse.

In addition to technical, Foster was faced with an aesthetic problem. At the direction of the government, the architect had to fit the skyscraper smoothly into the environment of the historic buildings in the area, so it didn’t feel alien. I don’t know what the government decided, but in my opinion, as well as in the opinion of the residents and many tourists, Foster did his job. Despite its modern high-tech style, the Mary-x skyscraper is surprisingly in harmony with such old buildings as St. Andrew Undershaft Church, for example. 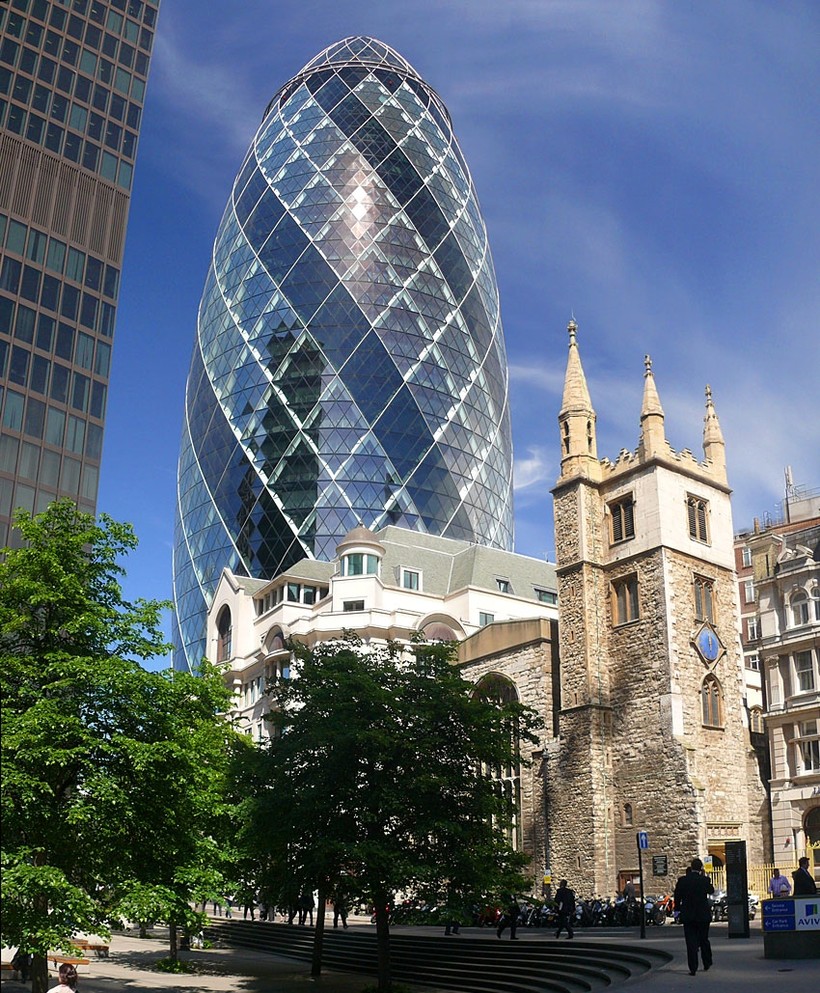 Immediately after its completion, the skyscraper became the headquarters of the Swiss insurance company Swiss Re. A few years later it sold the building but still rents it today.

As a huge office building, however, the Mary Axe Tower has its own charm for tourists. You can admire the gherkin building from the outside, or you can go inside. I didn’t get in there myself, as I happened to be nearby when the building was closed to the public. Which I actually regret and on my next visit to London, I plan to get to the skyscraper again and go up to the observation deck.

As I later found out, the skyscraper opens to tourists on Open House London day. It’s a big event dedicated to architecture. On one weekend in September, hundreds of unique London structures open their doors to the public to showcase themselves in all their glory. This includes the Mary Axe Tower. Everyone can visit the lower floors, the restaurants located on floors 38-40, as well as the observation deck at the top of the building with a magnificent view of London. 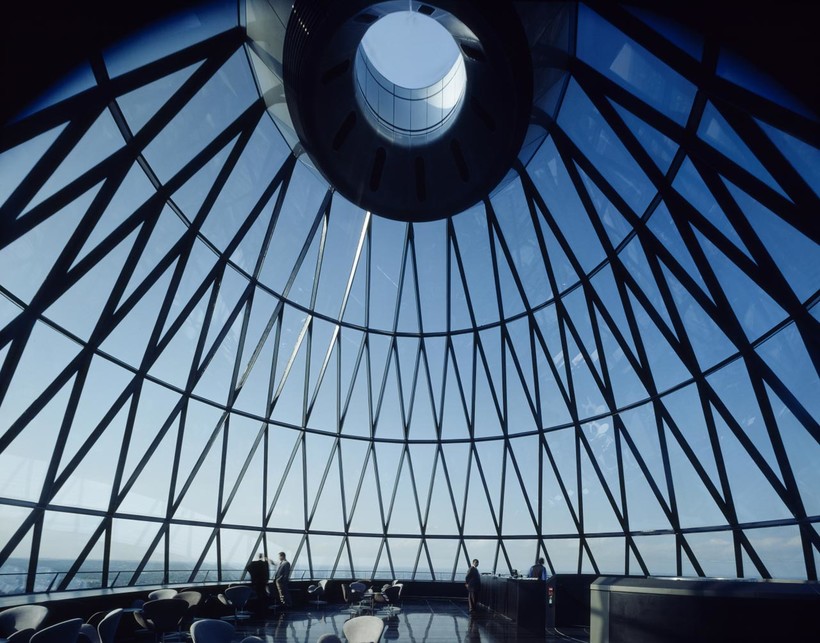 Visiting the Mary Axe skyscraper is free, but you have to stand in a huge line. Too many people who want to get there. You can walk there on their own, or you can listen to a symbolic tour. Hold them and professional guides, and enthusiastic amateurs who want to popularize architecture. 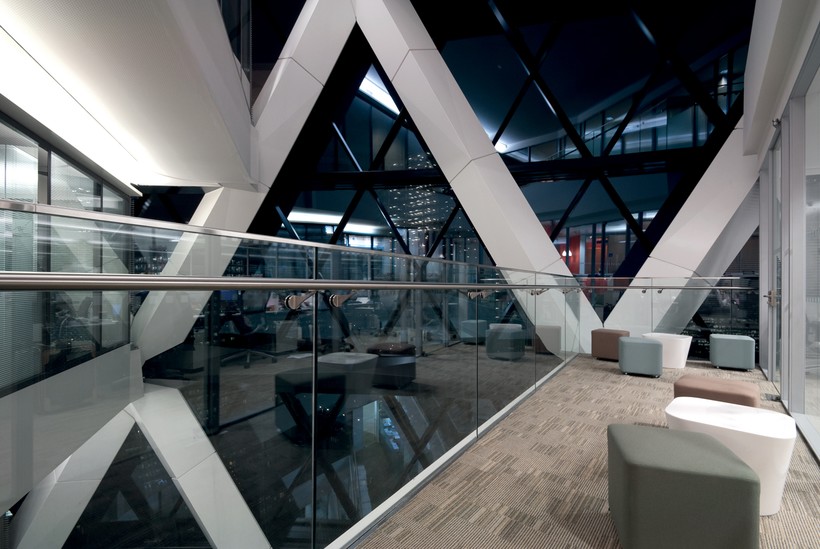 When you get tired of walking around the lower floors, go up to the upper floors for a bite to eat. There are 19 restaurants in the building that offer a wide variety of cuisine. Gourmands can find dishes to suit all tastes.

READ
The Shard Tower, The Shard skyscraper in London 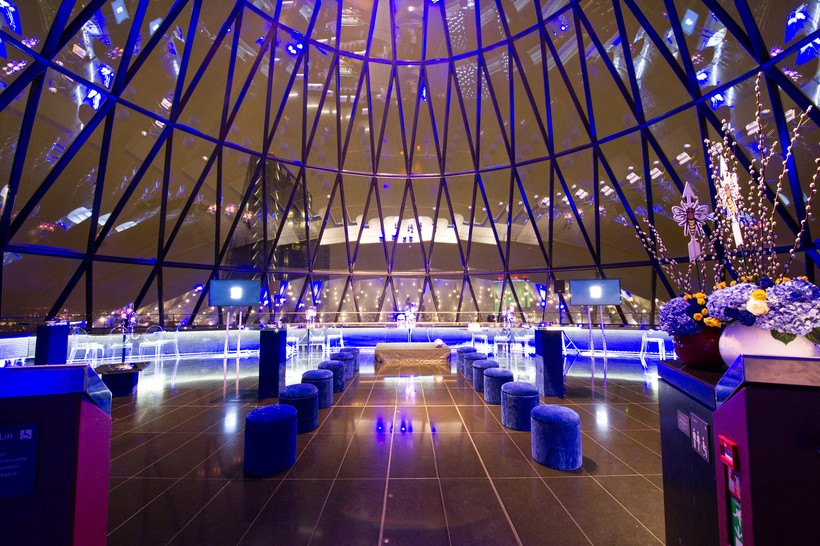 Built in three years, the Mary Axe skyscraper almost instantly became one of London’s most memorable symbols. It can often be seen in film clips, commercials, postcards with views of London. But it’s much more interesting to see Mary Axe for yourself. Walk through the streets of London without letting the building out of your sight, and as you approach it closer and closer, take in the magnificent eclectic view, and if you get there in September, you can also appreciate the spirit of this London skyscraper from the inside.