Within Scotland is the city of Edinburgh. It contains a separate quarter of the old city, which is located in the low-lying central part of it and is called “Mary King’s cul-de-sac.” The place is permeated with oppressive atmosphere and visiting it does not always bring positive emotions, however it is a popular tourist destination.

The name – Dead End Mary King – was given in honor of the mistress of most buildings of this quarter, at the height of the plague epidemic, in the XVII century.

The central area of Edinburgh at that time was very lively. All the important establishments were located there, and naturally, the hotbeds of terrible diseases such as: plague, smallpox, syphilis, which were raging at that time throughout Europe, were fixed in the center. According to the order of the municipality, the townspeople whose families were infected had to notify their neighbors in order to observe safety regulations. This was accomplished by hanging a rag of white cloth outside the window of one’s dwelling. After a while, almost every window of the neighborhood was adorned with a white cloth symbol, and the epidemic spread throughout the city.

Not understanding how to stop the plague, the magistrate gave orders to isolate all the sick in one place, and the corpses of the dead to be removed and burned, so that the infection would not spread further. The nightly collection of the corpses was carried out by monks. They took the bodies of the dead by cart outside the city and then burned them.

A block in the central lowland part of the city, with mass infections of the deadly disease, later called Mary King’s cul-de-sac, became an improvised infirmary.

The cul-de-sac was enclosed by a high stone wall, and infected people from all over the city were brought there. In this “locked city,” the sick lived out their last days, surrounded by the severe suffering of the dying, in the knowledge that the same thing awaited them.

100 years after the epidemic, the old facades of the buildings were dismantled and a new city administration building was erected. In fact, part of Mary King’s cul-de-sac was completely destroyed and part was bricked up and was the foundation for the new building.

Already in the twenty-first century, archaeologists have uncovered the surviving part that was bricked up, and the remains of the streets have been cleared and converted into a museum.

To get to the Mary King’s cul-de-sac , it is necessary to go down a separate system of communications, on narrow steps with a guide. Once down, you get to the level of an empty city, extinct from the plague. The visitors are faced with a labyrinthine dungeon with views of narrow streets buried underground, more like tunnels and passageways. There are remnants of staircases, boarded-up windows, boarded-up doors behind which hide rooms that have been empty for centuries. In some houses there are still wine cellars, ovens, cupboards, chimneys and storerooms.

Not surprisingly, the underground quarter is home to many ghosts of people who died of the plague in anguish, pain and fear. They roam the dimly lit tunnels and sometimes terrify visitors to Mary King’s cul-de-sac.

There is one house that is haunted by the ghost of a teenage girl, Annie. When Annie’s parents realized that their daughter was sick, they didn’t hesitate for a moment to isolate her from the other children and take her to die in the “locked town. The girl was told nothing about her illness, tricked into locking her in one of the cul-de-sac apartments. Annie died a painful death without understanding why her family abandoned her, and her soul never found peace. The phantom of the girl can be seen frequently entering the house where her mother had locked her up. Immediately there is a drop in temperature and a peculiarly oppressive state of mind. Sometimes Annie is seen with a dog, and sometimes holding a broken doll in her hand. Some say her face is battered with smallpox and her clothes are tattered and dirty.

Likewise, visitors to Mary King’s cul-de-sac claim to have felt someone’s cold touch at times, and naturally attribute it to the ghosts of the gloomy place. 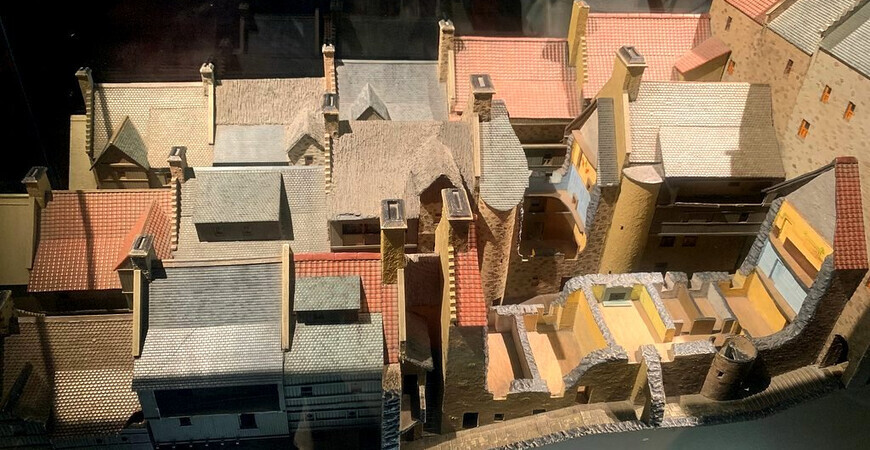 Mary King’s Close is an underground street that is located on Edinburgh’s famous tourist attraction, the Royal Mile. It’s a curious and highly popular tourist spot, laden with numerous myths and legends, including stirring ghost stories. The cul-de-sac is a quarter of the old town located in its central part. Those wishing to visit this Edinburgh landmark should know that it’s not the most positive place to visit – the oppressive atmosphere of the place doesn’t always bring a positive mood.

Mary King’s cul-de-sac is not called that way by accident, it was named after the landlady Mary King, who was the daughter of lawyer Alexander King. Mary King owned several houses on this street. The street dates back to the 16th century, although it was first mentioned in the 17th century. As early as the 18th century Edinburgh City Chambers, a new city administration building, was erected and Mary King was somewhere demolished, somewhere bricked up. For many years, these streets were closed to the public, at the same time the cul-de-sac became a true local urban legend. Local residents by word of mouth handed down many sometimes very dark stories and myths associated with this place. In the XXI century, archaeologists became interested in these streets, then they were under the City Chambers building, and they were rediscovered and cleared.

The history of the quarter itself, overgrown with legends, is quite grim. In the 17th century it was an overcrowded place with overcrowded houses on small streets. Sanitary conditions in those years left much to be desired, so during an epidemic of bubonic plague or “black death”, the local residents had a very hard time. According to urban legend, in 1644 the city authorities decided to close the streets to prevent the spread of the disease. According to this story, about 600 people remained in the cul-de-sac, closed for a kind of quarantine. It is because of this legend, as well as other equally macabre stories, the cul-de-sac has become so popular with tourists. But in fact, according to the official version, people were well taken care of – the city authorities tried to help everyone as much as they could.

READ
Jihlava Catacombs in the Czech Republic, photo and description

Because of the stories that the quarter was sealed during the plague with all the inhabitants, the cul-de-sac has become surrounded by many mystical stories about ghosts. Some visitors claim that you can still find ghosts of people in rags wandering between abandoned houses in these gloomy streets.

There is also a rather popular legend about a little sick girl named Ann, whose ghost can be found in the streets of this gloomy place. According to the legend, the plague-stricken child was left to die in one of the cul-de-sac buildings.

In 2003 the museum “The Real Mary King’s Close” was opened on this site, which introduces visitors to the life of the city’s residents of the 16th and 19th centuries. But the main exhibition value is the buildings of the cul-de-sac, preserved from the old days. Regular guided tours with historical re-enactors are held here throughout the year. Each tour lasts about one hour. Children under the age of 5 are not allowed on them for safety reasons. Mary King’s cul-de-sac can be reached by descending the narrow steps with a guide.

Walking through the many passageways and tunnels, one observes the empty, narrow underground streets, sparsely lit by bulbs on a string. Along the streets one can see the grim entourage of the Middle Ages – boarded-up doors, parts of staircases, boarded-up windows behind which are empty rooms, with cupboards, ovens, pantries and chimneys left over from those times. Also on display in the museum are everyday items from those times and portraits of former tenants. In addition, everyone can learn about the history of the Plague Doctor and relax in his outdoor courtyard.

Be sure to bring an electric flashlight before visiting these grim streets. Just outside the entrance is a souvenir shop where you can buy items that remind you of your visit to this unusual place.

You can get to Mary King’s cul-de-sac by bus. You will need to get off at the Victoria Street stop, where routes 23, 27, 41, 42 run. You can get to the landmark by rental car or by cab. In Edinburgh there are such cab services as FestivalCars, Central Taxis, and CityCab.

From Edinburgh Airport, the best way to get to your destination is by Airlink Express. The bus runs daily, from Platform D, every 10 minutes. The streetcar is also a convenient means of transportation if you want to get from the airport, on weekdays it runs every 8-10 minutes, at weekends, every 12-15 minutes.

Dungeons 0
The Mystery of the Czech Jihlava Dungeons: Who dug these catacombs, and why today

North America 0
The amazing giant plant, the General Sherman Tree Nature is the most skillful creator.

Cities and towns 0
Szeged In southern Hungary, on the banks of the Tisza River there is the