Mayon Volcano is the most active volcano in the Philippines

The Philippines are more than 7100 islands in the western Pacific Ocean. Because this island nation lies in the Pacific fire belt, it is home to many mountains and volcanoes. Volcano Mayon is the most active of them. Mayon is located in the southeastern part of Luzon, the largest island of the archipelago, in the province of Albay, Bicol district.

The volcano is located at the junction of two tectonic plates, the Philippine Plate and the Eurasian Plate. These plates are in constant motion, causing increased volcanic activity in the region. Mayon is a classic stratovolcano with a small central crater on top. The cone is formed by layers of lava flows from numerous eruptions. The slopes of the volcano are very steep, especially in its upper part, where they can reach a slope of 35-40 degrees.

Mayon volcano has an almost perfect cone shape, which can be considered the benchmark in the world of volcanology.

All traditional volcanoes tend to have a perfect cone shape. For example, the famous Fujiyama in Japan. It is noteworthy that this volcano mountain is actually private property. If you want to know who owns the famous landmark, we recommend reading about the volcano Mount Fujiema.

More than 50 eruptions of Mayon have been recorded over the past 400 years. Despite the impressive number of eruptions, the mountain still remains in perfect shape. 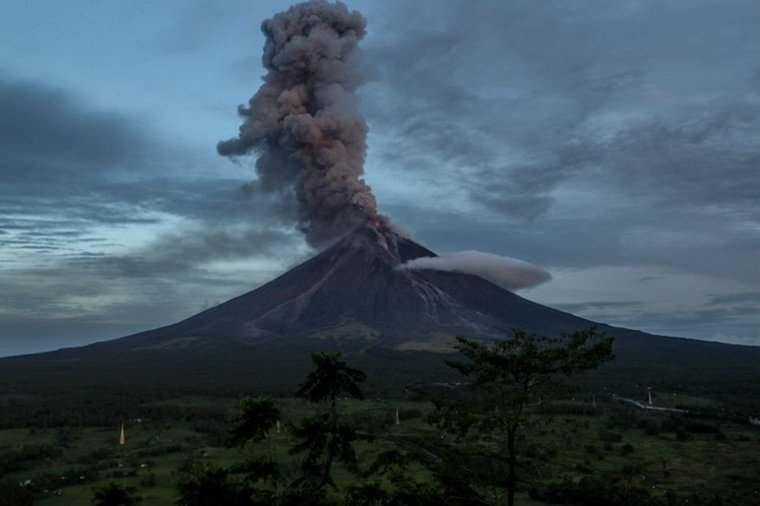 We will briefly list the most significant and destructive ones. 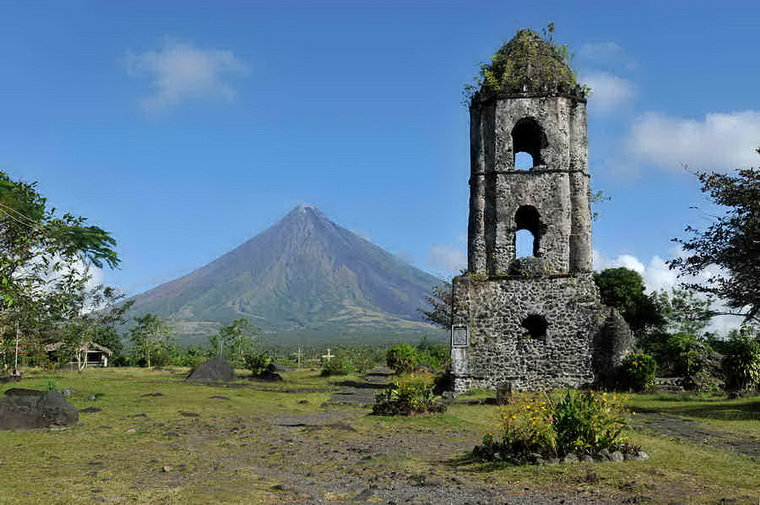 Mayon Volcano is under the watchful eye of the Philippine Volcanic Service.

The Legend of Mayon Volcano

Locals attribute the volcano’s name to an ancient legend.

The beautiful Magayon was the only daughter of Chief Makusog. Many famous warriors and even the leaders of other tribes wanted to marry her, but no one could win the heart of the beauty. Pagtugu, the leader of the Irida tribe, also tried to get her attention, but to no avail.

One day Magayon was swimming in the river Java and, slipping on the rocks, began to sink, since she could not swim. A young man named Panganoron passed by and saved the girl. As legends would have it, the young men fell in love with each other. Her father approved of his daughter’s choice and gave his blessing.

However, when Pagtuga learned of this, he kidnapped chief Makusoga and demanded that the girl become his wife in exchange for her father’s freedom. Panganoron rushed to the rescue and asked his warriors to join him in the war with Pagtuga in the mountains. The battle was fierce. Magayon watched the outcome of the battle. In the end, Panganoron killed Pagtuga. After his victory, the girl ran to embrace her fiancé. When the lovers met, an arrow fired by one of Pagtuga’s warriors pierced Panganoron’s back. He died in the arms of his bride.

Pagtuga’s warriors surrounded them, but Magayon took her lover’s knife and killed herself. All this her father and tribesmen saw. They were buried together. In time, people noticed that the place began to turn into a volcano. Makusog named it Mayon after his daughter, and he often repeated, “Mount Mayon is as beautiful as my Magayon.”

Myths and legends say that Magayon is the volcano and Panganoron is the clouds surrounding it. 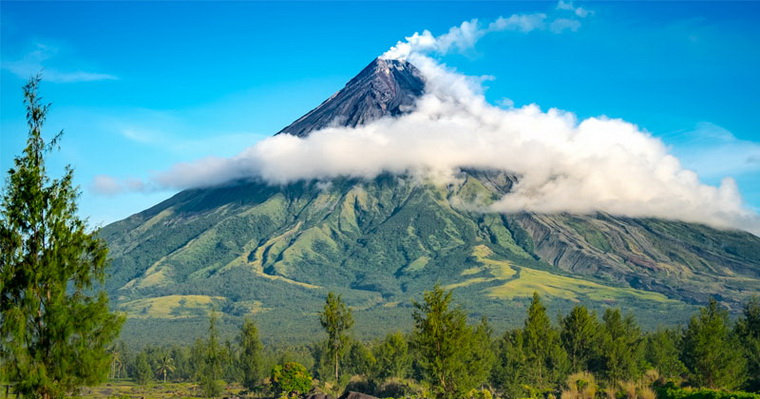 The volcano is Magayon, the clouds are Panganoron. So the legend says.

It’s going wild: the dangers of a volcanic eruption in the Philippines The recently awakened Mayon volcano in the Philippines has erupted. During the culmination lava fountains gushed up to 700 meters and ash rose to a height of three kilometers, reported the press service of the local Institute of Volcanology and Seismology (Phivolcs). Because of this, dense clouds covered the municipalities of Ginobatana, Kamaliga, Oasa, Polegi and Irigi. Severe ashfall in some cities of the provinces of Camarines Sur and Albay caused zero visibility.

The day before the institute experts upgraded the hazard level of the eruption to the fourth (penultimate). In the vicinity of the volcano has already had three eruptions with a magnitude of 3.8, 3.1 and 2.3 points. The most dangerous was the second, its epicenter was only 10 kilometers from the town of Socorro in the province of Surigao del Norte.

According to the newspaper The Manila Bulleting, local authorities decided to expand the evacuation zone to nine kilometers. This information was reported to the publication by the head of the Department of Emergency Situations and Public Safety, Cedric Diep. The governor of the province of Albay, Al Francis Bichara, reported the suspension of classes in schools and any work activities. On his Facebook page, he also advised citizens to wear nose and mouth masks and not to leave their homes.

Heinrich Steinberg, director of the RANS Institute of Volcanology and Geodynamics, told “360” about the dangers of the Mayon eruption and why you should not go near the craters and lava flows.

“Mayon is one of the most active volcanoes in the Philippine Islands. It has erupted nearly 50 times since the 16th century, that is, every six to eight years. Russia also has volcanoes like it. For example, Sheveluch and Bezymyannyi volcanoes in Kamchatka. But, fortunately, they are located 30-40 kilometers from populated areas. So even strong eruptions in 1956 and 1964 were not very dangerous for the population,” he said.

According to the direct observations of the seismic service, after the strong explosions there was a collapse of the crater dome, began pouring lava flow. During a day it passed about three kilometers. Its speed is not high, about 125 meters per hour. The expert said that the flow itself is not dangerous, because it is clear in what direction and at what speed. The danger is a large emission of debris and ash.

“It is true that at the stage of active lava movement the debris does not fly long distances, but the ash can go together with the wind quite far. That is why the administration has correctly advised that residents should stay at home and wear masks. The ash is a very harmful impurity in the air we breathe. Its particles are deposited in the lungs and, interacting with the moisture, release acid and other dangerous compounds,” added Steinberg.

The eruptions are graded in terms of total energy. But since Mayon’s activity isn’t over yet, it’s hard to estimate it yet. According to the volcanologist, if we estimate the approximate volume of magma and debris, the eruption can be classified as a class four, at most a class five. Steinberg noted that since Mayon is on the surface and not under water, it is not capable of triggering a tsunami.

It is also unlikely that the evacuation zone should be expanded. If there are already lava flows, it means that most of the energy accumulated before the eruption has found its way out. Therefore, there is no suggestion that the eruption will intensify.

“It happens, though. Once Bezymyanny started erupting in September-October, and the most powerful explosion occurred in March. But there the eruption went on continuously. And there are eruptions that take years or even centuries. This is the case with the Italian volcano Stromboli, on an island near Sicily. It has been erupting continuously since the fifteenth century B.C.. But this is an isolated case,” the expert specified.

Unlike earthquakes, eruptions are now predicted very accurately. Usually, in developed countries during eruptions people do not die, because there is a very reliable warning system. Therefore, as a rule, tourism at volcanoes is very well developed: routes are laid, excursions are made, the necessary infrastructure is available. The main thing to remember is that you can not climb a volcano, especially an active one, without an experienced and professional guide.

Most often, tourists are killed by volcanoes because of explosions and the ejection of debris. You should also remember that you can go without pants, but not without an oxygen mask. The gases released from the crater are very dangerous to life. You can not climb to the lava flow, its temperature exceeds a thousand degrees, the air above it is extremely hot. Change the wind – and the heat wave will lightning strike the curious – Heinrich Steinberg.

Mayon volcano is about 2.45 thousand meters high, it is located on the island of Luzon on the border of the Eurasian and Philippine tectonic plates. Around the volcano stretches a national park, making it very popular for tourists to visit. The penultimate eruption occurred in 2013. Then four German climbers and a guide were killed on its slopes. In 1993, the awakening of the giant killed 79 people. The most serious eruption occurred on February 1, 1814. The lava flow wiped out the town of Kagzawa, killing 1,200 people.