Medveditskaya Ridge in the Volgograd region 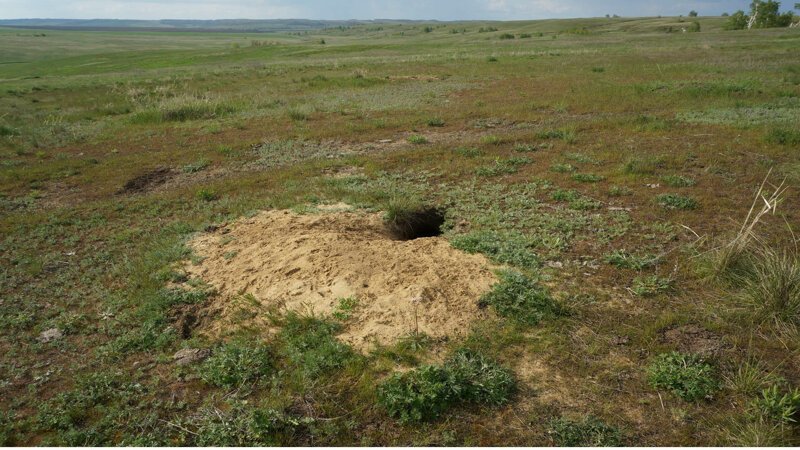 According to the theory, lightning in the Medveditskaya Ridge flies on a particular route – over two underground tunnels located underground. A guidebook on the Russian Empire tells of two caves with countless treasures in the Volga region. In the history of the Golden Horde there is evidence of the use of captive Russians by the Mongols to excavate the caves on the banks of the Medveditsa. In the early 20th century, the tunnels were used as a shelter for the White Cossack gang of Borodai. From such historical information we can assume that the tunnels have existed here since ancient times. But could they be just a natural phenomenon, an ordinary cave? This hypothesis is refuted by the results of research. The cave has perfectly straight, smooth walls, which is not characteristic of natural underground fractures or cracks. Under the top of the mountain the cave extends to a size of 35 meters, and from this huge “hall” in the sides diverge three more branches, which lead … to the known landing places of UFOs.

The main versions of the origin of the tunnels include the theory of a super-secret military base, or a secret UFO base, or the inhabitants of another space-dimension. Attempts to solve the mystery of the tunnels almost always fail, as if something prevents the researchers. At the entrance to the tunnel, people are seized by an unexplained feeling of horror, headaches, pressure surges, and sonic hallucinations. One of the expeditions that got the closest to the tunnel’s extension was stopped by a squadron of hundreds of fireballs. Locals call the Medveditsa Ridge “Devil’s Den”. No one can yet explain the nature of the strangeness of this place. For example, attempts to make an even tractor track here are useless. Every time a furrow is made, it becomes crooked the next day. Rarely, but there have been cases of people dying from meetings with ball lightning. 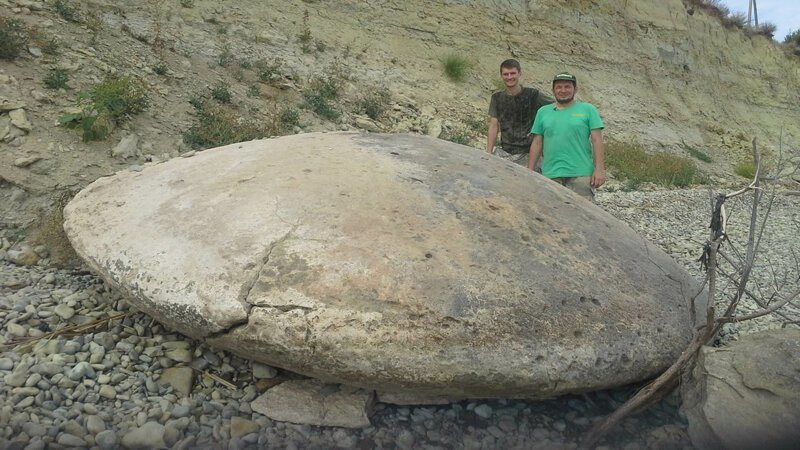 Another inexplicable phenomenon is a huge stone disk. 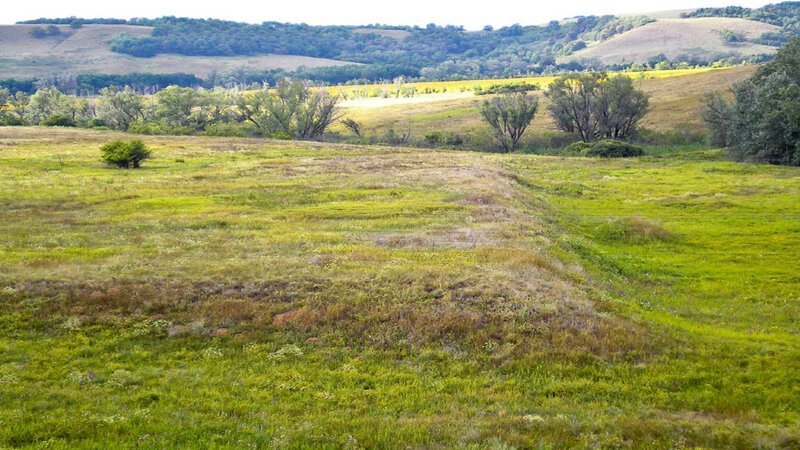 There are other strange events in the Medveditsa Ridge. For example, disappearance of people without a trace. In 1993, at the site of the disappearance of an amateur ufologists, was found a large dent in the ground, like a giant press. In 2004 a tourist who came from Bashkiria disappeared here. Incredible incident happened to one of the expeditions in 1993. On one day of research, which was cold and overcast, over the ground hung an unusual foggy haze. By evening, the faces and all exposed body parts of the expedition members looked burnt, like in the hot south, despite the total absence of sun that day. Even the springs gushing out of the ground in this area have their own strangeness. In one place it is distilled water, and in another place it is a radioactive spring. Alien “saucers” (or “triangles”) in the zone also will not surprise anyone. Local inhabitants also tell about “aliens” they have seen more than once.

It is already known more than 20 credible landing spots of alien ships in the area. Traces of UFO landings are quite clear and it is impossible to plow them – when approaching these places the tractors just cut off their engines. 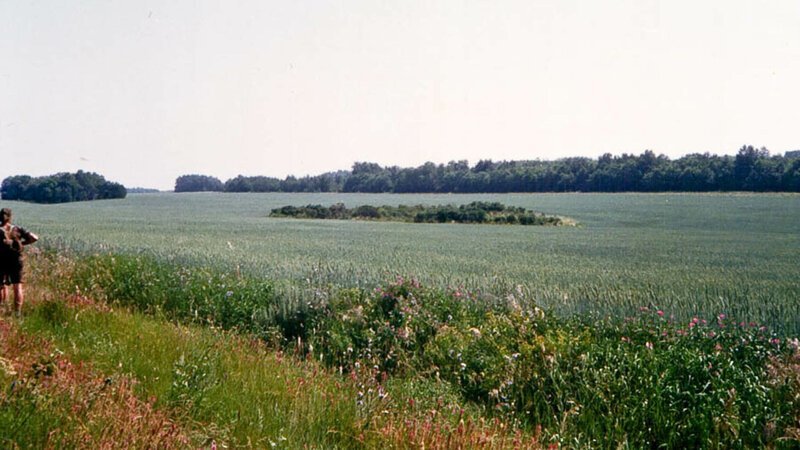 There is no increase in the radiation background near the UFO landing sites, but the clocks are disturbed and the indicators go off the scale. In some places the soil is completely sterilized, all microorganisms are destroyed, sometimes to a depth of half a meter. Occasionally here are found operated or killed animals, unusual objects in the form of balls, pyramids and cylinders. Sometimes, on the contrary, mysterious visitors take something with them, for example, extract samples of soil, leaving holes in the soil up to several tens of meters deep after the procedure. Medveditskaya ridge hides a lot of mysteries, the answer to which has not yet been found and probably will not be found very soon.

Anomalous zone: Medveditskaya Ridge. Has anyone already heard about it?

In the northeast of the Volgograd region, at a distance of 15-18 kilometers from the town of Zhirnovsk is a chain of hills ranging in height from 200 to 380 meters, located an oval length of two dozen kilometers. This is the Medveditskaya Ridge, one of the most anomalous places in Russia. 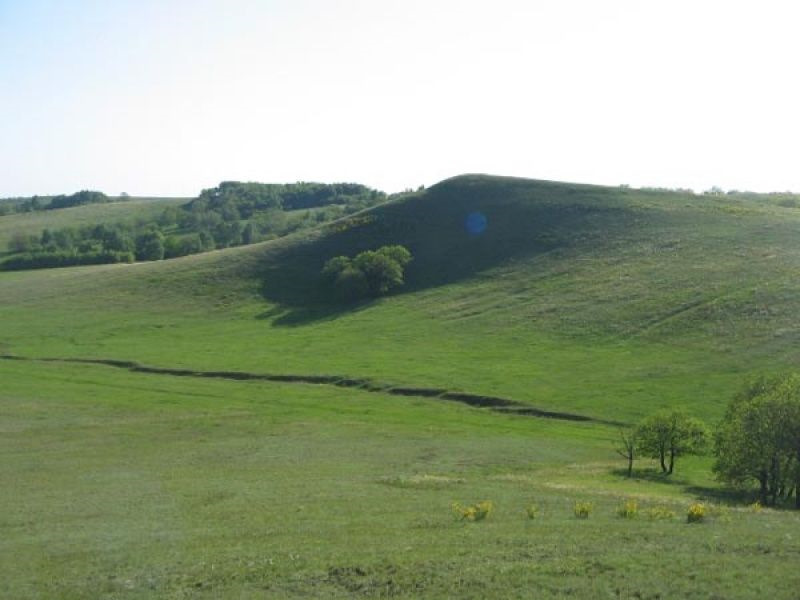 The Ridge, which got its name after the nearby river Medveditsa, is an ancient and mysterious place. Millions of years ago, during the Cretaceous Period, it was at the bottom of the ancient deep sea, but then the movement of tectonic plates literally pushed the ridge to the surface. Today these low hills are dissected by ravines, gullies, and densely growing trees on their slopes.

However, not the geological history and beauty of landscapes of this corner of the Volgograd region attracts fans of mysteries and scientists (since 1982 the ridge was visited by about 35 expeditions from around the world), and firmly entrenched reputation as an anomalous place. First of all it is connected with a great number of lightning bolts – both ordinary and globular – appearing over the hills irrespective of whether there are clouds in the sky or not.

The hills of Blue Mountain, nicknamed “the Slope of Mad Lightning,” are the site of the largest number of discharges. The place seems to attract electricity; many times ball lightnings were observed here, which could fly along the same route for dozens of hours, moving at a walking pace at a meter’s height from the surface. 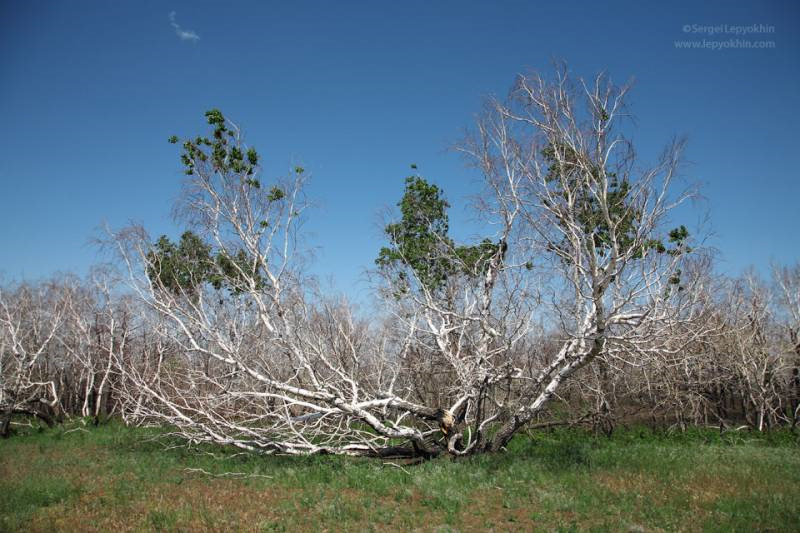 There are birch trees growing on the “Raging Lightning Slope.” But they look strange, unusual: the trees are absolutely bare, without a single leaf, the trunks are severely warped, as if they were twisted by some unknown force. 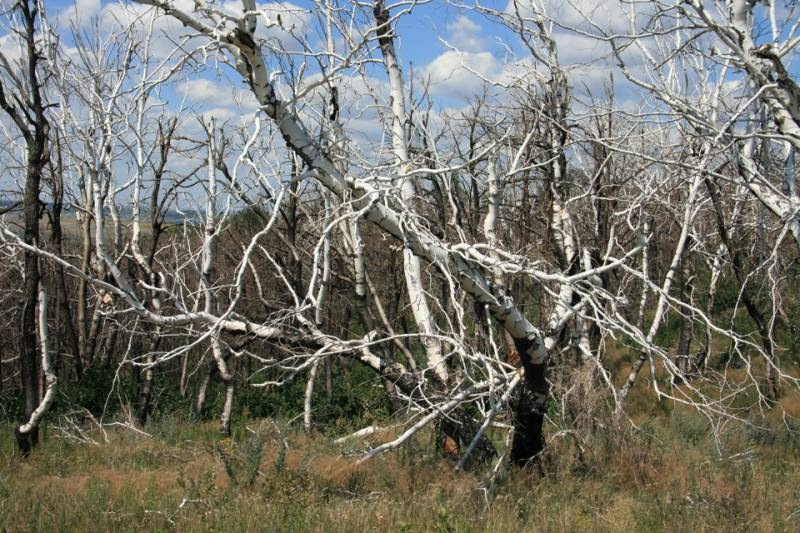 Many trees are thoroughly burned. Most – in the lower part of the trunk, but some plants scorched the entire core, in some cases of a massive tree remained only a charred stump.

READ
Cape Hatteras in the U.S., the whole truth about the dying place Sometimes the tree looks almost intact – except for a small hole burned into its trunk. Researchers agree that all of this damage was caused by lightning strikes.

Blue Mountain is the most famous place in the area where frequent electric discharges are observed, but it is by no means the only one. Scattered throughout the Medveditsa Ridge are areas of dead scorched earth on which nothing grows.

Other anomalies became widely known – the “Drunken Grove”, full of mangled, drunken trees, which, however, grow peacefully and have no traces of burns. 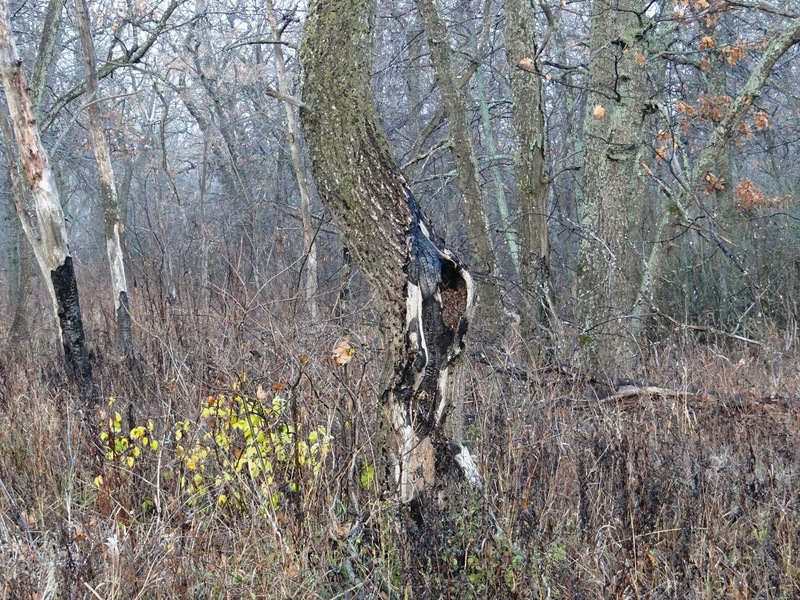 “Devil’s Lair” is a perilous place that locals have been avoiding since 1990, when shepherd Bisen Mamaev died here, as if burnt from within, in front of his partner. In such places, the equipment often malfunctions and the clocks show incorrect times. It is also interesting that near these anomalies are often observed UFOs of a triangular shape, which makes the ridge an attractive place for ufological research. However, there is as yet no definitive evidence as to whether or not these unidentified flying objects are of alien origin.

Similarly, the origin of another Medveditsa anomaly – a network of mysterious underground tunnels penetrating the local hills along and across – is unclear. The existence of mysterious underground tunnels may have been known to people since time immemorial. In the area of the supposed entrance to one of them a T-shaped structure from the first century A.D. was discovered, strictly oriented to the sides of the world – it is likely to be a temple. It can be assumed that the ancient inhabitants of the surrounding area knew about anomalies and associated them with the cult of a certain deity. It is still possible to hear stories that in ancient times, while the entrances to some tunnels were not yet blocked, they were used by horse thieves to hide from pursuit. The residents of the surrounding villages are still sure that there is a whole labyrinth under the ground, and the last passageway into it was blocked only during the Great Patriotic War. There is, however, one passage – but no one could go far along it. Only a bit deeper into the bowels of the earth, people begin to experience unexplained fear, auditory hallucinations begin – and as a result, researchers run headlong out of the tunnel, coming to their senses only on the surface.

A study of this cave, conducted from the surface by acoustic probing, showed that it becomes a corridor gradually widening to 120 meters, going deeper and deeper underground.

In the end, instruments showed that somewhere deep underground there is a huge cavity, and right above it – one of the anomalous glades, where lightning strikes. 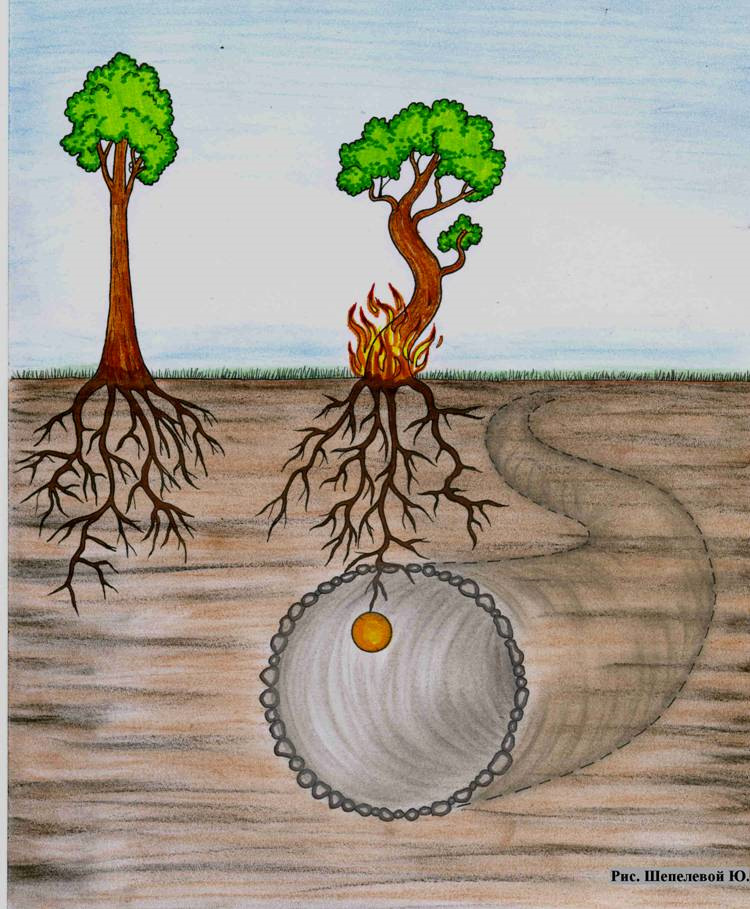 Too little is known about the mysterious underground caves, but some things can already be assumed today. Firstly, their existence is somehow connected with anomalous lightning activity. Secondly, the passages are almost certainly of artificial origin. As studies have shown, all underground tunnels are straight as an arrow, which would be impossible in their natural origin. 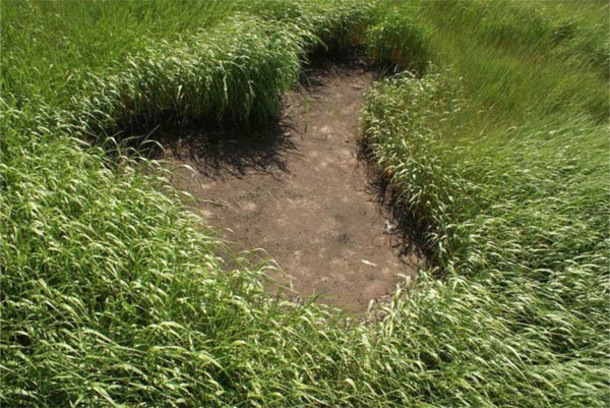 Indirectly on the man-made nature of these passages also indicates the presence on the territory of the Medveditsa Ridge zones of increased background radiation, as well as abnormally high metal content in the soil.

Who built this underground labyrinth? There is no unequivocal answer to this question yet. Ufologists believe that the local anomalies are a consequence of alien activity, and suggest that the underground complex serves as a base for UFOs. However, not all researchers agree with such conclusions. 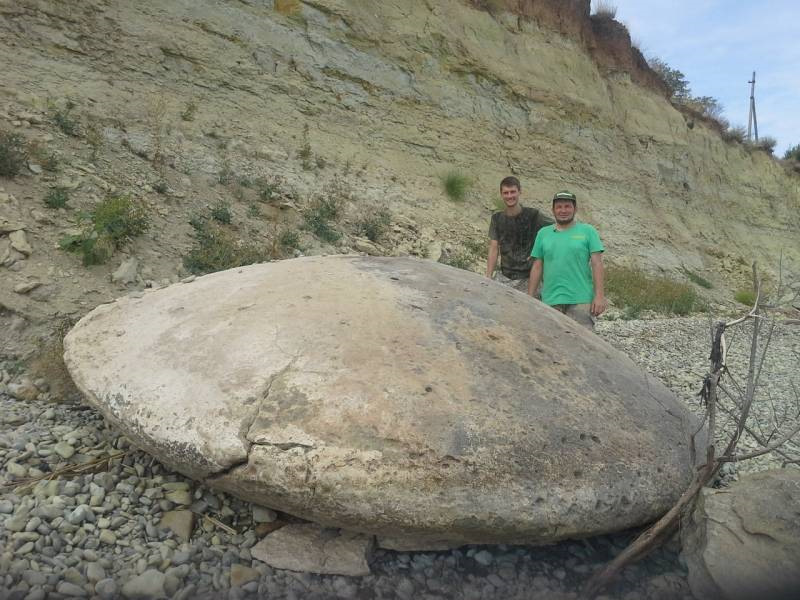 Some specialists who have been to the Medveditsa Ridge tend to believe that the buildings in its depths belong to some ancient civilization, now firmly forgotten. Lemurians, Hyperboreans or inhabitants of the mysterious continent of Mu come to mind. Is it true? Today we are not ready to answer this question. The mystery of the Medveditsa Ridge is still waiting to be solved. In 2015, a new anomaly was found in the Medveditsa Ridge, a huge stone disk