The Mesquita in Cordoba is an architectural monument built in one of the most beautiful cities of Andalusia.

The complex includes the Córdoba Mosque, the remains of the temple of the Visigoths, and an inner courtyard. There is now a functioning Cathedral, the largest in the world.

Mezquita is a real pride of Spain, which is protected by UNESCO. Each year tens of thousands of tourists come to admire the 856 columns of marble, onyx and granite.

If you are in these parts – find time to visit the temple, and useful tips to prepare.

History of the Mosque

Mesquita was erected in 785. The uniqueness lies in the fact that for 8 centuries, Muslims and Christians prayed here, practically in the same building.

These places have been sacred in all times:

Subsequent rulers of the Arab world also contributed much to the decoration of Mesquita. But in the 13th century the Reconquista took place, as a result of which the Umayyad Mosque was taken over by the Christians.

It has since become the main cathedral of Cordoba, used for worship and beautifying the city. 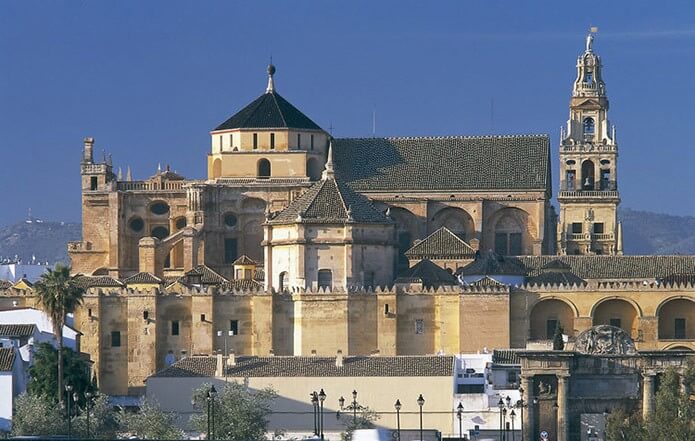 The Guadalquivir River flows from the south façade of the cathedral.

Nearby are the Alcazar fortress, the Roman bridge and other iconic landmarks.

The main feature of the Catholic temple is the unusual architecture.

Castilian kings, who conquered the land from the Arabs, understood the value and did not begin to destroy the decoration of the city.

But in the 16th century, Bishop Alonso Manrique initiated the reconstruction of the church. The restoration, whose plan was worked on by famous architects, resulted in an interesting combination of two styles – Renaissance and Moorish.

Next to the mihrab (so called niche in Muslim mosques) you will see the image of the Virgin Mary with Jesus.

There are also elements made in the late Gothic traditions.

The religious monument covers a huge area: it stretches 128 m from east to west and 175 m from north to south.

The scale of the construction strikes the imagination, but even more interesting you will see inside.

Some of the columns, made of expensive materials, were sent by the Byzantine emperor Leo in the VIII century.

Mirhab is one of the most interesting objects of the Muslim mosque.

It is beautifully decorated with patterns of multicolored glass and, unlike other mosques, does not look to the east (towards Mecca), but to the south.

It is said that the mihrab was deliberately turned towards the river because Abd-ar-Rahman, who came from his native Damascus, landed there. 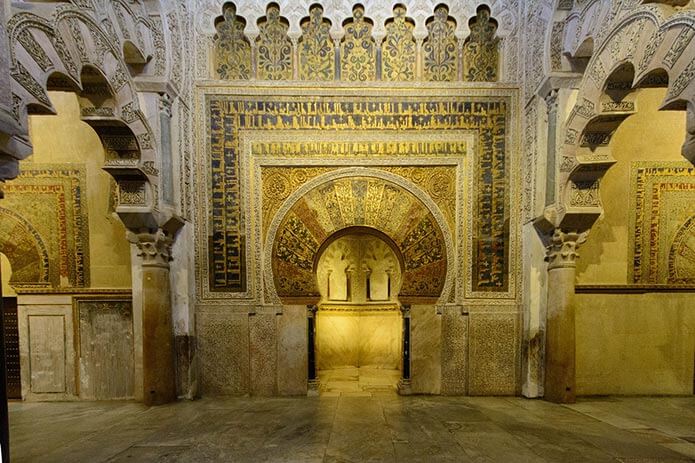 Built in the 16th century, the cathedral sits in the very center of the mosque. You certainly don’t see anything like it anywhere else.

Pay special attention to the mahogany choir made by the artist Pedro Duque Cornejo.

Their main motifs are scenes from the life of the Virgin Mary, as well as the New and Old Testaments.

The elaborately carved wooden seats with the faces of the saints are also good.

On the right side of the cathedral entrance you will see Christian chapels decorated with retablos. This is the term for an altarpiece in Spain.

The main retablo of the Cathedral of Cordoba was made in 1618 from valuable Cabra marble.

The images originally depicted the saints of Cordoba. But, as the temple was reconstructed, they were replaced by works by Antonio Palomino, the painter who painted a large canvas with the scene of the Assumption of the Virgin Mary. 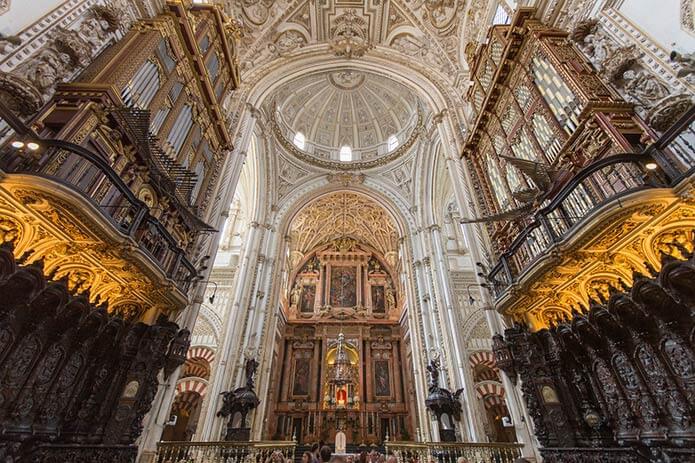 There are several small chapels on the grounds of the Mesquita Temple:

It is impossible to overlook the Mesquita treasury, where items used in religious rites and during church celebrations are collected.

Here you can admire stunningly beautiful cups, bowls, crosses made of gold and silver and decorated with precious stones.

A large part of the collection is made up of personal items that once belonged to bishops.

The pride of the treasury is the monstrance. The sacred vessel, made in 1514 by the German craftsman Enrique de Arfe, has been used for several centuries in church services.

Once a year, on the Feast of the Body of Christ, the two-meter high work of art is taken out in the city processions. 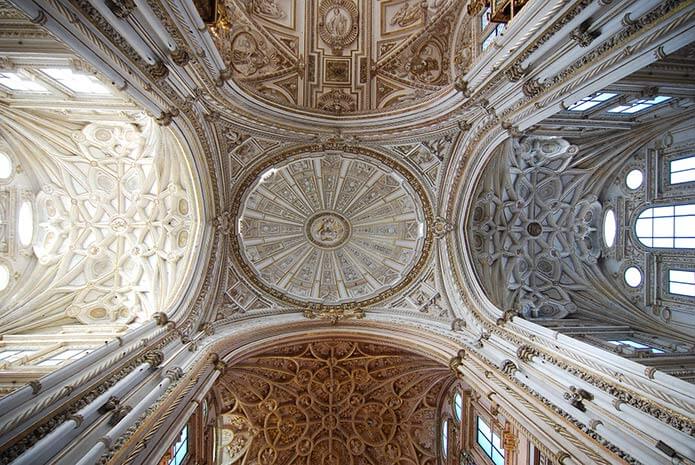 One of the most pleasant places in the complex is the Orange Court. There are palm trees and trees with juicy citrus fruits, and in sunny weather it is very beautiful here.

It is said that Europe owes its orange trees to the Arabs. 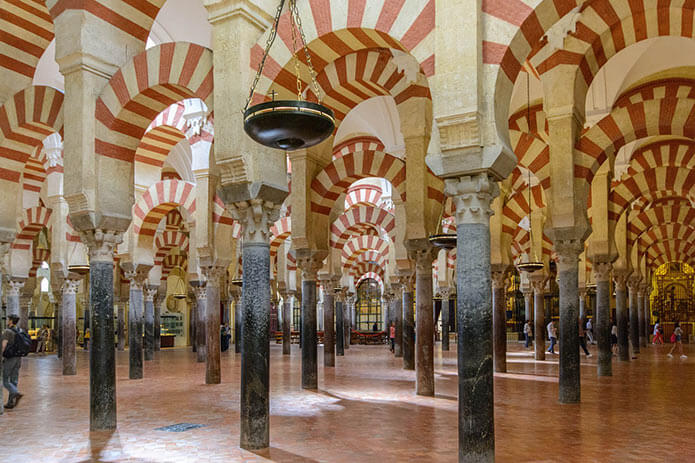 The courtyard and the tower of the Mesquite

While the line moves to the cathedral’s ticket office, take a walk around the courtyard.

It used to be decorated with slender palm trees brought to Cordoba by the order of Abd-ar-Rahman I.

It is said that under one of the palm trees the ruler liked to rest, composing poems and grieving over the fate of the Umayyad family in his native Syria.

Ordinary believers here purified themselves from their sins in five ablution fountains.

Now guests of the temple, as in many places of worship, throw coins into the fountain.

A tower was built on the wall surrounding the courtyard. During Arab rule it served as a minaret.

On the tower is a sculpture of the Archangel Raphael, the patron of the city, and beneath it is the “Door of Forgiveness.”

This archway acts as the main entrance to the courtyard of the Mesquita.

How to buy a ticket to the Mesquita

To make the tour more interesting – take an audio guide in Russian for 4 euros.

Tickets can be purchased at the Cathedral ticket office. But because of the great influx of people who want to stand in line for hours.

To avoid this problem, pay in advance online at the official site: https://mezquita-catedraldecordoba.es/.

We have an even more interesting option: use a guided tour, which includes a ticket to the Mesquite. To do that, go to the Link ⇒ , or click on the widget below. The ticket option is on the far right ⇓⇓⇓⇓

How to visit for free

Eligible for free admission to Mesquite are:

Another option is to attend the morning service, which takes place from 08-30 to 10-00. But keep in mind that you have to enter before 08-20, then the gates are closed.

The cathedral is available to visit during the following hours:

Since the schedule may change slightly, check the information on the website before you visit.

Also keep in mind that no one is allowed in the temple wearing open clothes or headgear.

How to get to the Mesquita in Cordoba

Finding the mosque is not difficult: it is located in the heart of the city. To get to Mesquita, take city buses number 3 or 12. Get off at the Puerta del Puente stop.

If you are traveling in your own or rented car, take the freeway to the mosque via Avenida de la República Argentina from the train station.

Location of Mesquita on the map

Mesquita is without exaggeration called one of the most grandiose structures in Spain.

From the outside, the complex looks rather ascetic: only the gates, decorated with elegant Arabic script, speak of luxury. But inside, a true marvel awaits, so take your time to explore this masterpiece.

Here, more than anywhere else, you understand the meaning of the German philosopher Friedrich Schelling’s statement:

“Architecture is music frozen in space.”

The Mezquita Mosque in Cordoba

The Mezquita, Cordoba’s cathedral and former mosque, is an absolutely incredible, grandiose structure! Just think about it: