The 8 Best Sights in the Marshall Islands

The Marshall Islands attracts tropical nature and a lot of historical monuments. These are mostly remnants of World War II military equipment sunk near the shores of the atolls.

Do not forget to subscribe to our Telegram channel. 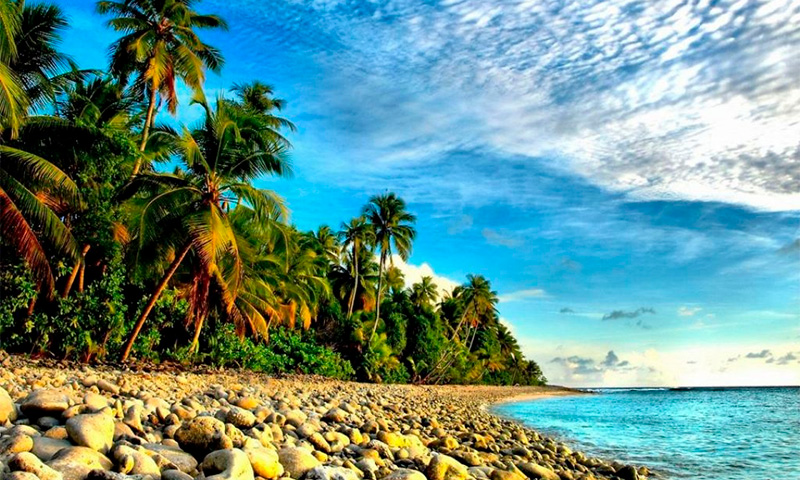 Who goes to the Marshall Islands and why

Those interested in history, especially military history, should visit the atolls of Mili, Vauthier and Maloelap. U.S. and Japanese military equipment of the 40s can be seen here on land and underwater, while scuba diving.

Connoisseurs of original culture will be interested to see Laura Village, an ethnographic village that has preserved traditional ways and customs, without the admixture of modern civilization. They should also visit the local Cultural Center and Alele Museum.

Outdoor enthusiasts will be interested in Kwajalein Island with its recreational facilities and plenty of sports fields for volleyball, basketball, soccer, golf and ping pong.

The Marshall Islands will be very interesting to divers because of the accumulation of sunken planes and ships. There’s also a lot of unique underwater fauna. Especially interesting in this aspect is the Bikini Atoll.

Majuro is the most populous atoll and the political center of the country. However, tourists are mainly attracted here by the opportunity to dive and explore the underwater depths. At the bottom of the ocean rest American planes and other equipment wrecks from the battles of World War II. There is almost no current in the small lagoons, so you can see strange fish and sea turtles.

Majuro also offers excursions to a sea farm where giant clams (tridacnas) and corals are raised. Tourists are also shown a sorghum processing factory. From the architectural structures on the island will be interesting to visit the local Capitol building. 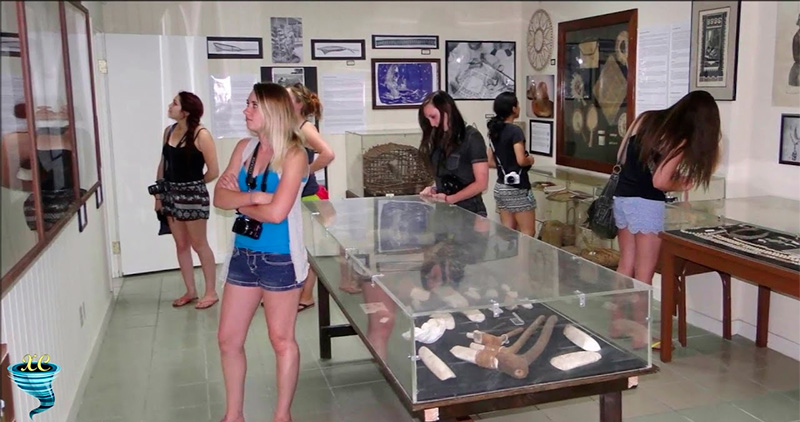 It is located on Majuro in the central part of the city. It displays cultural and historical artifacts: models of canoes, ancient weapons, household tools, utensils, and seashells.

The traditional alele baskets, woven from leaves, and ancient nautical charts made from knots and pieces of wood are a special attraction. 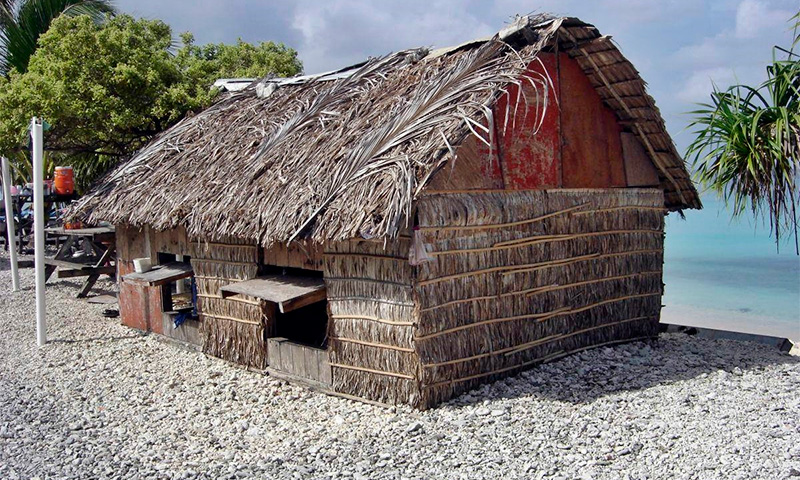 The settlement at the western tip of Majuro is attractive because it has preserved the customs and way of life as the local tribes did centuries ago. People here live in traditional houses, without the improvements brought by civilization.

Next to Laura Village is the Majuro-Peace Park (Peace Park), a memorial to all those who died in the Pacific during World War II.

Kwajalein is the largest atoll in the region with plenty of places to entertain and relax:

There is a soccer and basketball court, a golf course and a yacht club on the island. 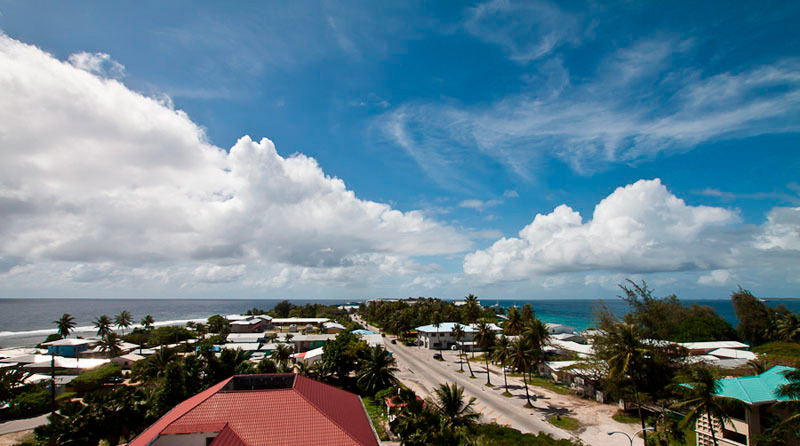 The Marshall Islands Cultural Center is located on Kwajalein. From the outside, it looks like a squat, one-story building. It houses artifacts related to the island’s history: photographs, documents, and prints of the islanders’ first encounter with Europeans.

There are also items related to navigation and seafaring, traditional tools, mats and fabrics, national costumes and decorations. A separate exhibit is devoted to artifacts related to the military confrontation between the United States and Japan in World War II. 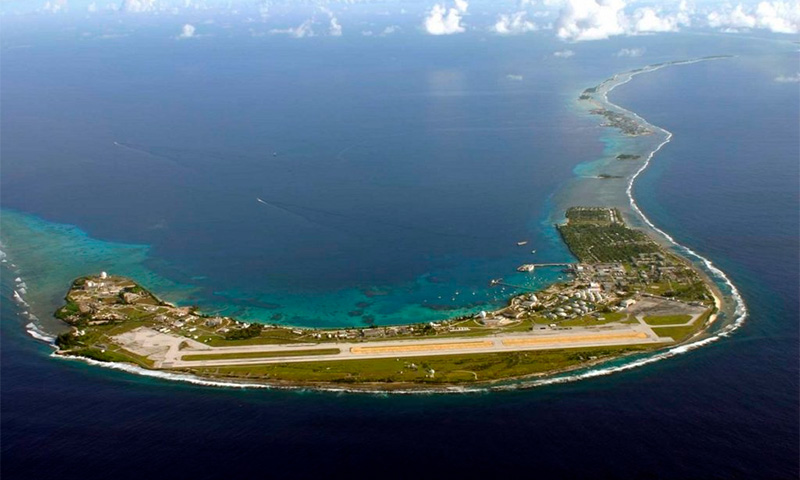 Laguna Atoll is notable for being the landing site for U.S. intercontinental ballistic missiles that are launched at the Vanderberg, California, base.

The launches take place at night and are accompanied by a spectacular spectacle – a series of explosions and fireworks. They are infrequent and are observed from quite a distance for safety reasons. 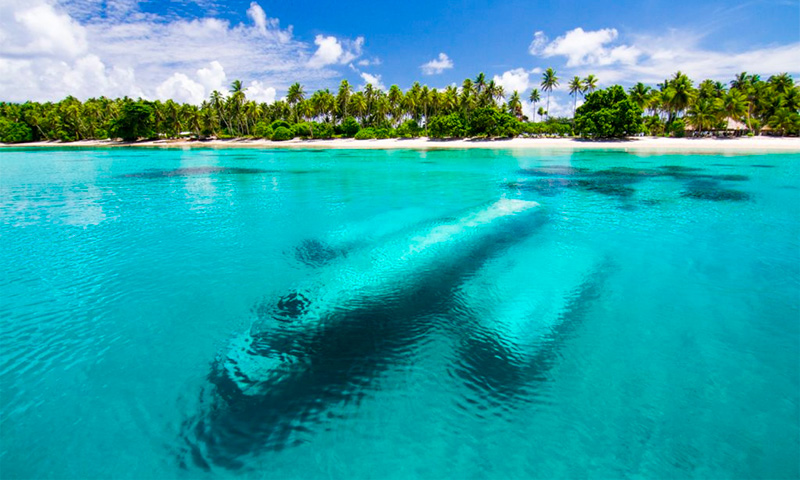 During World War II, this atoll was one of Japan’s main military bases. Weapons, airplane wrecks, and dilapidated defensive structures left over from that time are still found here.

In the main village called Mili-mili dozens of wartime relics are collected, and Japanese bunkers and artillery fortifications are still visible. The remains of two aircraft – the American B-25 Mitchell bomber and the Japanese A6M5 Zero fighter – still lie on the surface. The atoll is also interesting for divers. 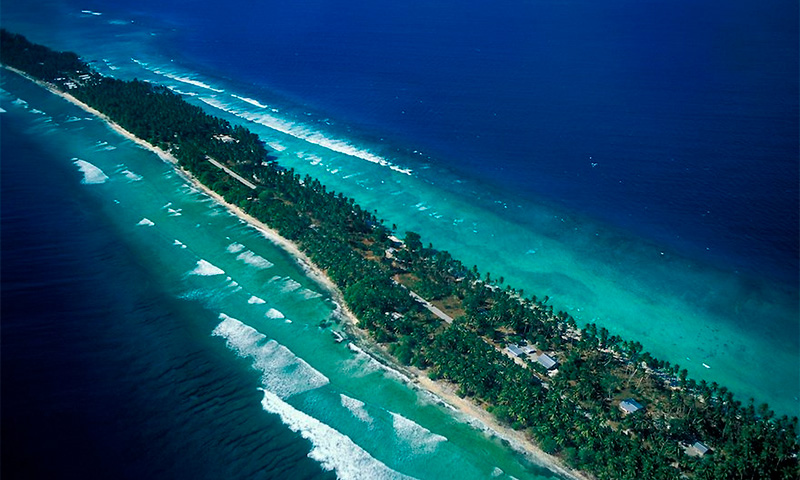 The atoll is notable as a cluster of World War II military equipment and structures left over from the confrontation between the United States and Japan. Defensive structures hidden in the jungle are found here in abundance.

Remnants of Japanese military equipment and weapons are collected in the center of the village of Wotier. Some vehicles are still on the move. The lagoon also contains sunken warships and airplanes, a lure for divers. 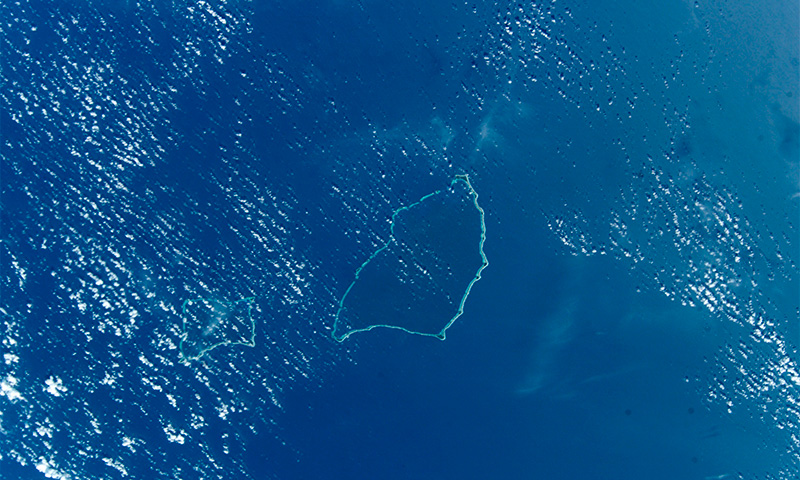 Another atoll that has become the last resting place of military vehicles from the battles of the ’40s. War relics include Betty fighters and bombers, an airfield, and several howitzers and anti-aircraft positions – they are literally scattered all over the island. The Japanese freighter Toroshima Maru is permanently anchored in shallow water across the lagoon.

But the fauna of the atoll’s coastal waters is rich in exotic fish and sea animals, which attracts scuba divers. 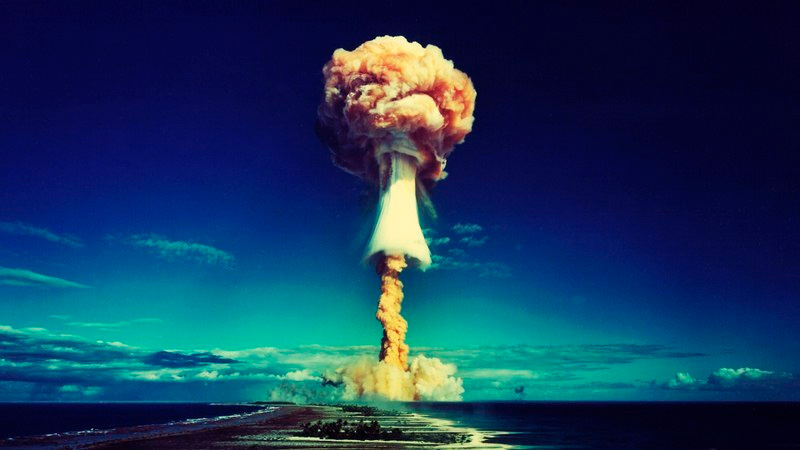 In the ocean waters around this atoll, as well as around many other Marshall Islands, there are still a huge number of sunken equipment from the war. But the atoll became famous for the testing of the hydrogen bomb and nuclear devices conducted there in the mid-20th century. Since the 80s, Bikini is deserted because of the high radiation background. It is dangerous to stay here for a long time, but regular diving tours explore the underwater depths.

Underwater stalkers are attracted by the opportunity to see sunken airplanes and old ships, as well as to admire clusters of fish and other sea fauna that have not been fished for decades. It’s a kind of analog to Chernobyl in the Pacific.

Traveling to the Marshall Islands: what to see

Finally decided to write about our trip to the Marshall Islands. Since, some people, do not even know about the existence of this state, I will tell a little about where it is. So, the Marshall Islands is a state in the Pacific Ocean consisting of 5 islands and 29 small atolls.

The largest atoll of the state is Majuro atoll, where the political capital of the country with the same name is located. It is a long strip of small islands connected by “bridges” of land.

Among tourists, the Marshall Islands are not popular, so the process of obtaining a visa is not easy. The fact is that for permission to enter the country, you need to apply directly to the embassy located in Majuro. In addition, the country is a U.S. military base, so you must have a U.S. or Canadian visa in your passport to enter the country. If you do not have a visa, you must contact the U.S. Embassy to obtain permission to enter. In addition, getting to the Marshall Islands is not easy, because there are no direct flights from Europe and Russia to the country. We took a transit flight through Tokyo and Honolulu.

Recreation in the Marshall Islands is mostly beach, there are very few attractions. But for diving enthusiasts this place is especially attractive, because off the coast you can see a huge amount of sunken military equipment from World War II. That’s why we, as big fans of diving, and went there.

But, about the diving after, first let me tell you what you can see:

But of course, the highlight of the resort is diving! In small lagoons, where there is almost no current, you can watch flocks of colorful coral fish, peacefully swim by sea turtles and other underwater residents of the coral reef. Diving safari .

After an amazing dive into the tropical underwater world, we decided to rent a small boat and fishing rods and go fishing in the open ocean. I managed to catch a few dorads, mahi mahi, small marlin, octopus and squid. The fishing was a success!

When you come to the Marshall Islands, you should not limit your visit to one atoll, so after spending a few days on Majuro, we went to an atoll called Mili. What makes this atoll interesting is that, during the war, there was a Japanese military base here, on which American troops dropped bombs for many months.

Evidence of this have survived to this day: virtually the entire surface of the atoll is covered with shell craters. Diving in this place attracts a huge number of tourists, because under the water hiding a whole “cemetery” of military equipment. We certainly did not miss the opportunity to dive and consider the remains of crashed warplanes. And yet, we saw a real underwater garden, in which the whole swarms of stingrays were swimming. The rest of the time we swam in the crystal clear water of the lagoon and sunbathed on a beautiful beach, covered with fine white sand.

I also recommend diving the Kalalin Strait, where in addition to tropical fish, corals and turtles, you can watch the sharks. Adrenaline rush and a lot of thrills guaranteed!

The next (and last) point of our trip was Medjit Island – an amazingly beautiful place, covered with greenery and flowers. What makes this island unique is that it has the only freshwater lake in the country. What is surprising, in the coastal waters of the island there are no poisonous fish. So swimming here is as safe as possible.

READ
Kefalonia is a Greek island in the Ionian Sea, in Greece.

The trip turned out to be amazing, exotic and very interesting. One of the best trips in my life.