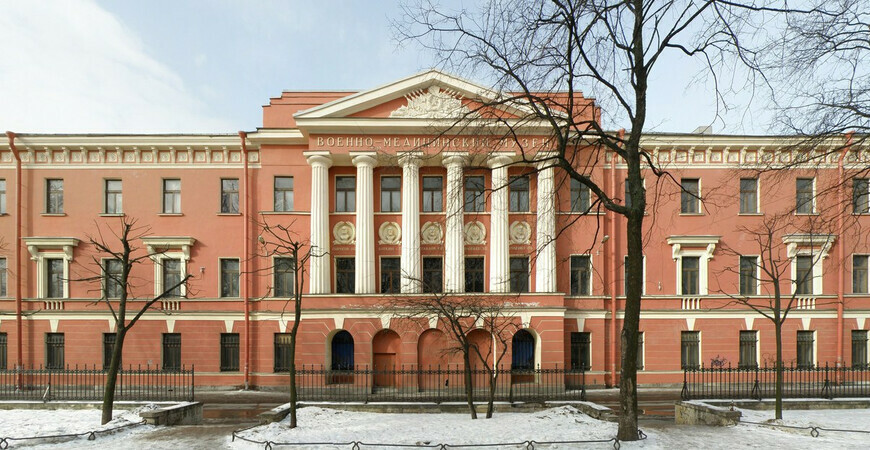 Military Medical Museum of Ministry of Defense of the Russian Federation in St. Petersburg is a unique thematic museum, which has more than 450 thousand exhibits about the development of medicine and the participation of doctors and medical workers in armed conflicts in different periods of time. Initially, the museum (established in 1942) was located in Moscow, but later it was moved to Leningrad, in the buildings belonging to the Lifeguard Semenovsky Regiment.

Panoramic overview of the exposition:

Today there are historical expositions, where one can see photographs, documents, scientific works of famous scientists – I. I. Mechnikov, I. P. Pavlov, V. M. Bekhterev, S. P. Botkin, N. I. Pirogov, I. M. Sechenov and others, medical instruments, inventory, clothing items and much more.

The museum keeps an archive of military and medical documents. It is a unique and most important database that contains case histories of all the wounded and sick soldiers, as well as documents of individual and group medical records since the Second World War.

The exposition of the Military Medicine Museum

The main exposition is located in 11 rooms. In addition, the museum regularly hosts temporary exhibitions related in theme to the main activities of the institution.

Part of the exhibition:

St. Petersburg Military Medical Museum is open every day except Tuesdays. The last working day of each month is sanitary day.

Please note that the ticket office closes one hour earlier.

You can visit the institution on your own or as part of a group. Guided tours are also available upon request.

Entrance ticket with the right to view the entire exposition:

Prices for guided tours (for groups of up to 15 people):

When paying for the tour guests must also purchase admission tickets.

During public holidays the museum can be visited for free:

The Military Medicine Museum is located in the historical center of St. Petersburg not far from the Fontanka River. The exact address of the museum is Lazaretny Lane, 2. However, the entrance to the halls where the exhibitions take place is in the new building, from the side of Vvedenskaya Street.

The Vitebsk railway station is across the street from the building, so there are no problems with transport in this place.

If you walk 300 meters from the metro station “Pushkinskaya” through the Vvedensky garden, you can go straight to the museum.

The red metro line, to which “Pushkinskaya” station belongs, has connection stations with all branches, which makes it easy to get to the Military Medical Museum from the sleeping areas.

There are several stops between the metro and the Vvedensky garden (on the Zagorodny prospectus) “Vitebsky vokzal, metro Pushkinskaya”:

Car owners can park at the parking lot of the Vitebsk railway station (free parking for 100 cars). There are no big parking lots near the museum.

The Military Medicine Museum – all about doctors in the war

One of the most unusual thematic museums in St. Petersburg is the Military Medical Museum of the Ministry of Defense of the Russian Federation, which is located in Lazaretny Lane. It has hundreds of thousands of unique exhibits that tell about the history of medical profession and doctors and nurses of the hostilities. The museum was born

Initially at the origins of the medical collections was the Kunstkammer. It was here that all the rare and unusual anatomical exhibits were brought. Later, in 1863, a special Surgical Museum was opened. However, the rapid development of science required a building for permanent exhibitions, and the main thing was to preserve the documents and invaluable experience of medical care in the conditions of combat operations.

This question was especially acute during the Great Patriotic War, when Soviet medics made an enormous breakthrough in the field of surgery and treatment of various infectious diseases. That is why in October, 1942 in Moscow the Major-General of Medical Service, Professor A. N. Maksimenkov had presented the structure of a specialized museum. It was planned to create several departments, including sanitary, epidemiological, evacuation, statistical, as well as a library and an archive. On November 12, the structure of the museum was supported with some minor corrections and the inclusion of several more departments. This date has since been considered the museum’s birthday.

The museum was actively preparing its first exhibition. Staff photographers and artists, as well as many subject specialists, were involved. Formed teams went to the active fronts, where they gathered a unique collection of preparations, drawings, sketches and other materials. Because of the large number of exhibits, it was decided to place the museum in the Sanitary Research Institute and partially on Bolshoi Kozlovsky Lane, 6. The first open exposition included materials collected at the Karelian and Volkhov fronts. In 1943, it was decided to move the Museum to Leningrad (now St. Petersburg).

It was possible to move the museum to a new location only after the siege had been lifted. The main exhibition was to be housed in the historical buildings of the Semenovsky Regiment. Storage of documents, funds and archive, as well as rooms for the staff accommodation were organized on Ruzovskaya Street. Despite the availability of rooms, all of them required major repairs after the blockade shelling, and some, such as the former regimental barracks, required serious redevelopment. Leningrad architect B. Zhuravlev, the author of the Rossiya Hotel and several subway stations, was working on a project to reorganize them. The main building of the Semenovsky Regiment was founded back in 1799 in a rather strict style and bore little resemblance to a museum.

In order to make it a real landmark of the city and give it a more solemn look, Zhuravlev seriously redesigned the whole facade. So, according to the new museum project, sculptural images of famous science figures were added to the semi-columns. Among them are Pirogov, Botkin, Pavlov and other scientists.

READ
Museum - Underground Typography in Moscow, the history of the revolution The halls of the museum in Lazaretny Lane were not opened for visitors until September 25, 1951. On the first floor, a separate collection dedicated to the activities of N.I. Pirogov was placed, and materials on the history of domestic medicine for the period until 1941 were also gathered. Fifteen rooms on the second floor of the museum were dedicated to the organization of medical care of the army during the Great Patriotic War. The third is devoted to prevention of epidemics and contagious diseases, treatment of wounds of different complexity, as well as important scientific breakthroughs made during the war.

Further development of the museum

With the development of science and technology the exhibitions of the museum were constantly reorganized and replenished. So in 1955 a unique collection of exhibits on radiation sickness was presented. In the 1962th – on medical support of space flights. Also in the museum was opened the permanent exhibition devoted to Pirogov. Pirogov. Here you can see the personal belongings of the great scientist, his surgical instruments and manuscripts.

Since the beginning of the 50-s on the basis of the museum were set up the workshops where were published the visual aids on different profile themes as well as its own small studio. The first training film in color was shot here in 1954.

On June 4, 1958, the museum opened its own military medicine archive. Until now, it keeps medical records, as well as case histories and registration cards of all the wounded and sick people of World War II. The archive also includes a significant amount of data on those who died during the war and the blockade.

With the help of the documents, more than 8 million of Russian citizens could later confirm their participation in the war and get the appropriate monetary compensation. Also in the archive there is information about foreign soldiers. Thanks to them many families from America, Germany, Italy, Japan, France and other countries were able to find information about missing relatives. As the museum expanded, so did the number of visitors. However, in 1982, due to the deterioration of the premises, part of the exhibition was moved to the administrative buildings at 6 Vvedensky. A few educational collections for students of the Academy were kept in the main building.

With the development of medical technologies more and more new expositions are being opened. There are international exhibition projects devoted to the history of World War II, man’s exploration of space and other events that greatly influenced the history and development of marine and land medicine. Numerous multimedia projects have been created on the basis of the museum, including the video journal “Masterpieces of Military Medicine”. It features a brief overview of the museum’s collections, as well as small sketches of the most interesting collections. In the museum you can see a large library on medical topics. It contains both modern and ancient editions, such as Ambroise Paré’s treatise on the treatment of gunshot wounds from 1607. There is also a huge collection of paintings, including works by I. Repin, numerous drawings and sketches made by field artists after battles, and sketches made by famous scientists, among others.

Today the museum is not just a site with a visual information base for teaching medicine to young specialists. Serious research work on a wide range of problems is carried out here. The specialists generalized and systematized a great deal of experience received by the medics during participation in all military conflicts. The results of these researches are used to write scientific essays, articles and dissertations. On the basis of the Museum an active educational work with schoolchildren and conscripts is conducted. Special interactive programs, quests and several cycles of thematic classes have been developed. The Military Medicine Museum of the Russian Defense Ministry in St. Petersburg is a great place to visit with the whole family. In addition to the most interesting expositions, you can attend museum and pedagogical classes, as well as unique temporary exhibitions.

The museum is open Monday, Thu, Friday, Saturday, Sunday – from 11:00 to 19:00, Wed – from 12:00 to 20:00, Sunday – day off. You can make an appointment by phone. Discounts for social benefits are available. Additional educational activities at the institution are paid for separately. Information about them it is possible to learn on a site.

You can walk to the museum from the metro station “Pushkinskaya” through the garden. The entrance is located on the Vvedenskaya Street. Also you may take a streetcar number 16; trolleybuses number 3, 8, 15, 17; bus number 25, 90, 177, 258 to the stop “Vitebsk Station” or “Pushkinskaya Metro Station”.