We visited the park on the last day of our trip to Israel. It turned out very interesting and successful, because during that trip we crossed the whole country from north to south and, as if for the curtains, took another quick look at everything we saw (only in miniature). We can recommend the opposite option: first go to the park Mini Israel, think about what, where and how, and maybe adjust your plans a little. Yes, it seems there is a program of excursions for those who are not yet familiar with the sights of the country, but we, of course, did not take tours. By the end of the trip we could lead our own excursions

By the way, I can rightfully say – layouts are very similar to the originals, even the surrounding landscapes tried to reproduce.

A model of the ski elevator in Haifa.

You can walk around the park on foot, or you can rent a two-seater electric car. We chose the second option. True, to rent a real car license is needed, which we didn’t have. But by not very long persuasion and persuasion, we finally got the coveted keys. Mini Israel, welcome!

We had to say a lot, but the electric car we got!

Mini Israel is the world’s largest park of miniatures.

The park area of 35,000 square meters (60 vacation plots of 6 acres each) contains all the major cultural, natural, religious and other attractions of Israel in miniature form.

The population of this toy country – 25 thousand people. The height of each inhabitant is 7 centimeters, and they are all individuals, in the sense that each one is painted by hand.

A model of the Wailing Wall in Jerusalem

In addition, in this tiny country you can see about 400 objects-copies of Israeli sights. There are transport links between them: nearly fifty planes and ships, a kilometer of railroad and three trains. And it all rides, swims, stops and generally lives a full life!

A model of a bus station. In the picture it looked like people were hiding from the sun in the shadows. It’s just like in real life! Mini-airport

Add to that the huge number of live bushes and small trees (like bonsai), most of which are trimmed weekly. Under the ground there are 40 km of wires, four hundred motors and motors, almost a thousand sensors of various kinds and about two thousand light bulbs. Layouts are made on a scale of 1 to 25. The entire park was created by 200 people and, judging by the results, they tried very hard.

The rosemary tree, with the little palm trees on the left

Mini Israel Park – how to get there?

When planning trips, I always leave the last day in reserve in case of unforeseen problems, but if all is well – we spend it sightseeing in and around the city of departure. On that trip our final adventure was just that, Mini Israel.

The park is very conveniently located, just 15 minutes from Ben Gurion airport, our flight was at night, so we had a whole half day to visit the park. By the way, it’s only a 20 minute drive from Tel Aviv or Jerusalem. From Ashdod it’s not far either.

Here’s a Google map, you can even lay out the route with buses. From Jerusalem, from the central bus station there are direct buses to Laturn, and then a 1 kilometer walk.

The miniature park operates on a rather strange schedule. We went there nugad and we were lucky, but just in case, coordinate the time of your visit with the opening hours of the attraction.

The official website, where you can check the opening hours of Mini Israel and learn more about the park – http://www.minisrael.co.il/ru/%D0%BE-%D0%BD%D0%B0%D1%81 (page with the schedule in Russian).

Overall, we liked the park, the place is nice and interesting. If time allows, I would recommend a visit.

I am in Mini Israel.

And a video-excursion for the most curious.

That is all. I’ll be glad to hear what you think (especially if you’ve been there or will be), write in the comments! Bye! 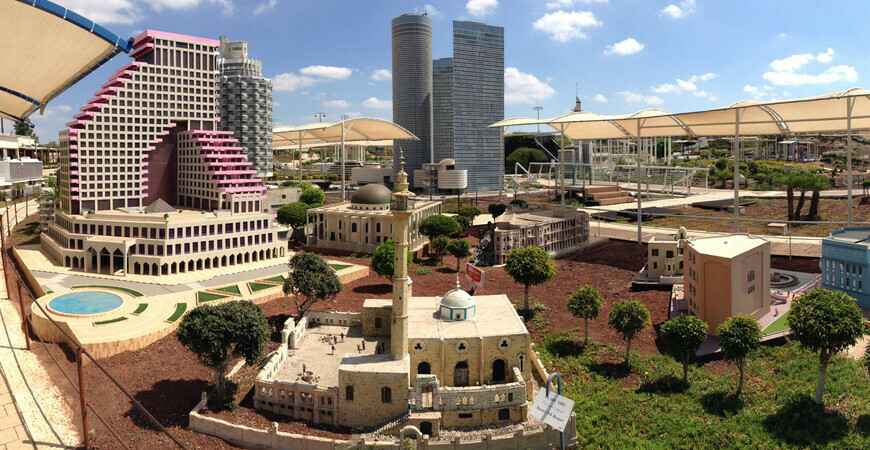 Miniature parks are one kind of museums, which collected famous historical, architectural and natural objects of one or more countries in the exact reduction. The first private parks appeared supposedly in the XIX century. Originally miniature models of buildings and figures of people were used for the decoration of garden railroads. Later, public replica museums also began to be built. The very first of them appeared in 1930 in Great Britain.

Now similar complexes are widespread around the world, and their popularity grows inexorably from year to year. One of the largest museums of miniatures in the world is the park “Mini Israel” in the small town of Latroun. Opened in November 2002, it is considered one of the most popular tourist attractions in the country. This grand project allows you not only to feel like Gulliver among Lilliputians, but also to get acquainted with the major attractions of Israel in just one day.

The cost of admission to Mini-Israel is 69 shekels. Children under two years of age are free. There is a price of 59 shekels for preferential categories of citizens. This includes seniors, people with disabilities, students and military personnel. A discount of 10 shekels applies when purchasing tickets online. For organized groups of over 20 people, there is also a special price. All details are available on the park’s website, or by phone.

Mini Israel Park is a unique open-air museum project that allows you to take a short trip around the Holy Land.

“Mini Israel” is shaped like a six-pointed Star of David, with each triangle symbolizing a city or region of the country. All of the park’s exhibits have historical, cultural, and ethnic value. The location of models of buildings, roads and landmarks is fully consistent with the originals, preserving their proportions. The vast area of the museum complex has over 350 miniature models of buildings, landmarks and landmarks, about 500 animals and as many cars, 30 airplanes and almost two hundred ships.

Most of the exhibits are movable. It is worth noting mechanical figures of people, with high accuracy repeating scenes from real life. Altogether there are about thirty thousand of them in the park. The creators of the exhibits tried to make all the inhabitants of “Mini-Israel” look as realistic as possible. So you can see the representatives of different nationalities, ages, professions and religions in the little dolls. The vast majority of the replicas are made in 1:25 scale.

All elements of the park are unique and created by hand by the highest class specialists. Here you will not find a random faceless building, or, for example, two identical figures of people. The materials from which the models are made are environmentally friendly, which allows you to visit the museum with small children without worrying about their health. Much attention in the park is aimed at the landscaping of the territory.

There are about 50,000 plants planted inside, including dwarf plants. Many species of trees were bred by botanists specifically for the fairgrounds. The system of watering the plants is fully automated and controlled by a computer. All in all Mini-Israel is a work of art and a great place to relax with the whole family.

Mini Israel is located near the small town of Latroun, 40 km from Tel Aviv and 50 km from Jerusalem. Getting to the museum is easy by bus, rental car or cab.

To get to the park from Jerusalem you can take city buses. The bus stop is called Mini Yisrael Intersection. It is located directly opposite the museum on highway 424. There are lines 403, 404, 432, 433 and 435. The trip takes about 40 minutes.

Renting a car is one of the convenient and inexpensive ways of traveling around the country. Especially since the main highways and freeways connecting major cities are of high quality. The distance from the main international airport of Israel named after Ben Gurion, located in Tel Aviv, the park is 30 kilometers.

The route from the airport to the “Mini Israel” takes highway number 1 or number 424 in a northeasterly direction. These two highways run almost parallel to each other, so there is no fundamental difference which one to choose. Approximate travel time – 30 minutes.

You can quickly and comfortably get to the park by cab using mobile services: Gett and Yango. The cost of a trip from Ben Gurion Airport to “Mini Israel” is about 150-170 shekels.