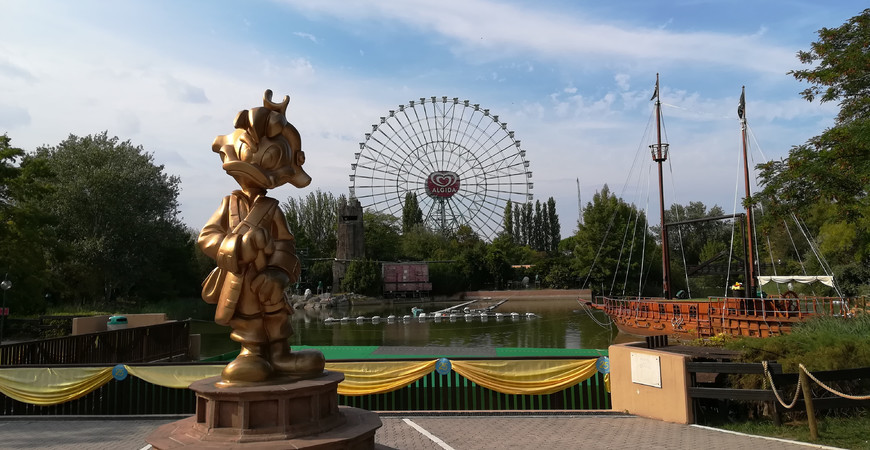 Daily from April to September. From September to October 30 only at weekends. From November 1 to April on holidays (Halloween, Christmas, New Year).

Since the opening of the park in 1992, it was visited by more than a million and a half people.

Mirabelandia has five themed areas: the Far West (a transformation of the idea of the historical Far West), Bimbopoli – a paradise for kids, Route 66 – the American Dream, Adventureland – a land of adrenaline, and Dinoland, populated by 54 dinosaurs.

Mirabilandia Park in Italy is known not only for rides, but also for spectacular circus shows, ice shows, a laser show “Night Show” and nighttime fireworks. Especially popular is the traditional stunt car show “Police Academy”.

In the park “Mirabilandia” rides are divided into 3 types: intensive, moderate and quiet.

The six intense rides include the huge Katun and Ispeed roller coasters, two 60-meter Oil Tower 1 and Oil Tower 2 with 65 km/h and 80 km/h ascents and descents, Legends of dead town and the world’s tallest waterslide Divertical.

One and a half dozen quiet rides are designed primarily for children, many of them suitable for kids from 3 years old. These are the fountains and water guns Aquaqua, Santa Fè Express, carousel Reptilium, Flying Arturo, Bicisauro and the classic Carousel, the tower Geronimo, playgrounds Ottoland and Fantasyland, Dinosaur Park Monosauro, Mini Rapide, Colazione da Papere, Brontocars, Campo Sioux Rope Park and the 90 meter high Eurowheel. By the way, this wheel was custom-made in Russia and at the time of its construction was the highest in Europe (later it had to give way to the London Eye). In 1999, the wheel in the park “Mirabilandiya” entered the Guinness Book of Records as the only wheel in the world, which is lit by 50 thousand light bulbs.

On the Internet there are many reviews of the park “Mirabilandia”. Visitors describe water slides with enthusiasm and advise to buy a splash-proof poncho for 2 euros on the spot, so as not to get wet from head to toe.

Lovers of extreme sports are advised to visit the enormous roller coaster “Katun”, rightfully considered one of the scariest rides in the world, especially if you sit in the first cabin. There is no leg support on this ride, so visitors always feel like their feet are going to hit the treetops.

Experienced tourists are advised not to come to the park on August weekends: the crowds of people and the crowds in the queues will spoil the impression of a beautiful park.

Mirabilandia is open daily from mid-April to mid-September. From September 14 to October 31, the park is open only on weekends, from November 1 to April for public holidays (Halloween, Christmas, New Year). Not all attractions are open at Christmas (in particular, the water fun is not possible in this weather).

It is better to check the official website of the park for the exact dates of operation.

The park’s own beach is open daily from June to September.

A Mirabilandia Park ticket is valid for 2 consecutive days (except for special evening tickets). To use this ticket on the second day, you must remember to register on the first day at the ticket office and take a photo, otherwise the ticket will be invalid.

The park ticket entitles you to all rides and shows except Legends of Dead Town and Mirabeach.

When you buy tickets online, there are discounts of 3-6 euros per ticket.

The park is constantly running promotions, so in order to buy tickets at a better price, you need to look at the official Mirabilandia Park page.

Visitors can also purchase a “flexi” ticket that entitles them to visit the park within 7 days of the purchase date.

Paying from 65 to 130 euros you can buy a season ticket to the park in the Bronze, Silver, Gold or VIP categories. These tickets give a variety of benefits: discounts in the stores and restaurants of the park, free parking or discount, discounts for holiday parties in the park and even free entrance to the park for family or friends.

This ticket helps reduce waiting time in lines for the park’s main attractions. It doesn’t mean the right to get through without queuing, but ticket holders go to the rides through a separate entrance.

The Flash ticket can be purchased at the customer service center or at any park store. Visitors can purchase Flashpass in different categories – Gold, Regular and Mini, entitling them to various privileges.

Mirabilandia is situated between Rimini and Ravenna, at km 162 of the SS16 Adriatica freeway. When planning your trip, you should consider that in addition to the park you can also see other sights of Rimini.

The nearest airports are in Rimini, Bologna and Forlì.

If coming from the north or south of Italy, leave the A14 Bologna/Ancona freeway at the Cesena Nord exit. Then take the E45 in the direction of Ravenna until the Mirabilandia exit.

For those coming from Central Italy, take the A1 freeway to Orte and then take the E45 towards Ravenna, as far as the Mirabilandia exit.

The nearest major train stations to Mirabilandia are Ravenna, Rimini and Cesena and the nearest station is Lido di Savio/Lido di Classe. From this station you can reach the park by a special shuttle, the schedule of which is coordinated with the arrival times of the main trains.

From mid-June to mid-September, the park’s special shuttle, called Bonelli Bus, travels along the coast along the circular route Cervia – Cesenatico – Gatteo a Mare – San Mauro Mare – Bellaria Igea Marina – Rimini – Riccione – Misano Adriatico – Cattolica – Gabicce Mare. During the season the schedule of the shuttle can be checked on a special website.

Bus number 176 can be taken from Ravenna, the beach Lido de Savio, the resort of Milano Marittima, the town of Cervia (Cervia). On holidays, this bus runs on a special schedule.

From the resort of Lido Adriano you can change at the stop “Ravenna FS” (at the railway station), take bus number 80 and then bus number 176.

From Marina di Rovanna, change at the Ravenna FS stop (at the train station) and take bus no. 70 and then no. 176.

Buses Nos. 90 and 176 can be taken from Casal Borsetti, Marina Romea and Porto Corsini, and change at the Ravenna FS stop (at the train station).

You can comfortably get to Mirabilandia Park by cab with Kiwi, itTaxi or Uber mobile apps.

Mirabilandia: how to get there 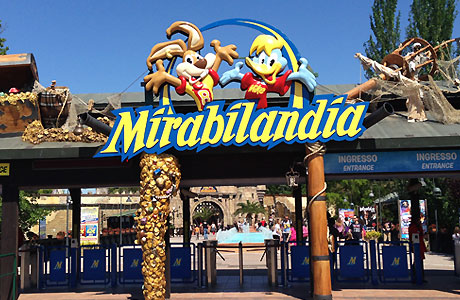 Mirabilandia is an amusement park in Italy, located in the Emilia Romagna region. The park is located near Ravenna and Rimini. The park is divided into 7 themed parts. In addition to the 40 attractions in the park there are regular shows and performances, and in the summer two beaches are set aside. 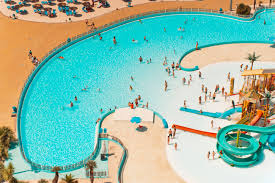 It is easy to get to Mirabilandia, both by train and by bus.

The nearest train station is called Lido di Savio/Lido di Classe. If you look for tickets on the Trenitalia website, enter Lido di Classe into the search engine. From this train station you can get a free minibus that will take you right to the park.

To Mirabilandia from the most popular tourist spots of the Emilia Romagna coast there is a direct bus Bonelli from 13/06/2016 to 10/09/2016 from Monday to Saturday. Tickets cost 5 euros. The bus makes the following stops:

You can see the schedule here: Bonelli Ravenna – Mirabilandia

From Ravenna to Mirabilandia there are two direct buses:

1) Bus 176 also connects Ravenna and the amusement park. The bus also stops at the resort of Milano Marittima, at Cervia and at Lido di Savio. The bus stop in Ravenna is near the train station of Ravenna.

You can see the schedule here: Linea 176 Ravenna to Mirabilandia

2) Bus 4 connects Ravenna and the amusement park. The bus stop in Ravenna is near the Ravenna train station.

You can see the timetable here: Linea 4 Ravenna to Mirabilandia

If you want to get to Mirabilandia from Lido Adriano, you will have to change at the train station of Ravenna with bus 80. At Lido Adriano the bus stops at Via dei Campeggi and Via Puccini. Puccini.

From the train station of Ravenna there are two direct buses to the amusement park: 4 и 176

You can see the schedule of bus line 80 here: line 80 Lido Adriano-Ravenna (FS)

If you want to get to Mirabilandia from Punta Marina, you have to change at the railway station of Ravenna by bus line 70 or 80. In Punta Marina the bus stops at v. Navigatori.

From the train station of Ravenna there are two direct buses to the amusement park: 4 и 176

From Cesena to Mirabilandia there is a bus 149 every day. In Cesena, the bus stops near the city’s train station. You can see the schedule here: Linea 149 Cesena – Mirabilandia

From Forli to Mirabilandia bus 126 leaves every day. In Forli the bus stops near the train station in Forli, near Via Alessandro Volta at the Forli Punto Bus Terminal. You can see the timetable here: Linea 126 Forli – Mirabilandia.

Locks 0
Ode to Belgium. Bouillon and the Protector of the Holy Sepulchre Continuing the story