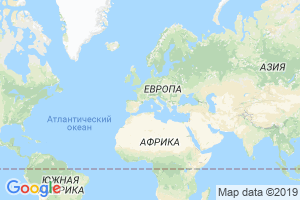 Monaco, or the Principality of Monaco, – a mini-state located in the south of Europe on the coast of Ligurian Sea, bordering with France, 20 km northeast of Nice. Monaco is one of the smallest states in the world, it covers an area of only 2.02 square kilometers. The number of residents of Monaco – 38 897 people (data 2016).

The capital of the country is the city of Monaco, whose borders coincide with the borders of the state. The native inhabitants are Monegasque (16% of the population). The official language is French; the spoken language is the Monegasque dialect, which is a mixture of separate dialects of French and Italian.

The territory of modern Monaco was already inhabited by the Thracians in the 10th century B.C., later the Greeks and the Monoïques (one of the Ligurian tribes) came to this land. The beginning of the history of modern Monaco can be considered the year 1215, when the Genoese colony was founded in this area and a fortress was built. In 1297, the fortress of Monaco was cunningly occupied by the troops of Francesco Grimaldi, who took it from the supporters of another Genoese clan. Francesco himself, who later became the ancestor of the ruling dynasty of Monaco, disguised himself as a monk to open its gates to his troops. As a reminder of this, for 700 years now, Monaco’s coat of arms has depicted two monks with swords.

From 1524 to 1641, the Principality of Monaco was under the rule of Spain, which supported it in the wars against the French King François I, in the defense of Malta against the Turks and in the Battles of Lepanto in 1570. In 1641 Monaco came under French protectorate, maintaining its internal self-government, and in 1713 its sovereign status as the Principality of Monaco was confirmed.

READ
Guernsey is an island in the English Channel, part of the Channel Islands

The French Revolution deprived the Grimaldi family not only of power and property, but also of freedom. Monaco was annexed to France by the Convention in 1793. After Napoleon’s fall in 1814, Monaco’s independence and all the Grimaldis’ rights were restored, but the Principality found itself under the protectorate of the Kingdom of Sardinia where it was until 1860.

In 1861, Prince Charles III signed an agreement with France whereby Monaco lost most of its territory in exchange for recognition of its independence and 4 million francs. Having lost almost all its natural resources, Monaco decided to develop tourism and gambling. Thus, in 1863 the Société des Bains de Mer was founded, which included hotels, a theater and a casino built in 1865. Monaco’s luxury district was named after the prince – Monte Carlo. The rapid development of tourism contributed to the economic development of the small country.

According to the Treaty of Versailles, which ended World War I, Monaco’s foreign policy must conform to that of France. During World War II in 1943, Monaco was occupied first by Italian troops and then by German troops. In 1911, during the reign of Prince Albert I, the first constitution limiting princely power was created, and today Monaco is a constitutional monarchy.

In 1963, a convention was signed between Monaco and France on the conformity of Monegasque and French taxation principles, whereby Monegasques, French residents in Monaco for at least five years and companies with more than 25% of Monegasque capital are exempt from tax in Monaco.

READ
Tunisia - The Republic of Tunisia, the state of Tunisia in North Africa

Hotels in Monaco offer a high level of service and comfort at equally high prices. Many tourists prefer to stay in hotels in neighboring France, spending a little time on the road, rather than overpay for lodging. Even modest options by conventional standards will not be cheap. For example, a room at a three-star hotel without breakfast will cost about 80 euros.

At first impression, it seems that the principality is almost entirely built up with high-rise buildings, but this is not the case. Approximately 30% of the entire country are gardens and parks. And the developments along the coast are chic restaurants and casinos.

A large part of the country’s income is from media and publishing houses for covering the life of the princely family. So the main attraction of the country is, of course, the princely palace. It is the official residence of the rulers of Monaco. For seven centuries, the princely palace has been and remains the sole residence of the Grimaldi family. For six months of the year the palace is open to the public. In the series of sumptuously furnished rooms you can learn a lot about the history of the European monarchy. And the palace grounds offer the most beautiful view of Monte-Carlo and the coastal port. The casino in Monaco is the oldest and most respectable in the entire Old World. The casino in Monte Carlo was opened in 1862, and the park in front of it is the most expensive place in the world. The halls of the casino are decorated with marble sculptures, paintings and frescoes. Admission costs 10 euros.

The pride of a modest principality is the Oceanographic Museum, which for a long time was headed by Jacques-Yves Cousteau himself. In 90 pools splashing local and exotic fish, sea creatures, which the naked eye can not discern, offer to consider through a magnifying glass. There is also a hall with model ships, skeletons of whales and stuffed sea creatures, a collection of navigation devices and antique nautical charts, a cinema and a library. Any oceanarium pales in comparison to the Oceanographic Museum’s rich and unusual collection. At the Prince Rainier Museum of Antique Automobiles, every car on display is a work of art, from the rarest of vintage cars to modern day masterpieces.

Larvoto Beach in Monte Carlo is the most glamorous and chic beach in the country. Here it is customary to come to bathe and sunbathe in full parade: you can go without the top of a swimsuit, but not without the jewels, as numerous guidebooks jokingly refer to this place. In fact, it’s very clean and cozy. La Condamine is a former seaport. Now it is the most populous place in the country with a busy nightlife. It is the coziest place in the whole principality: in the morning, under the arches of orange alleys you can have a leisurely coffee, and in the evening enjoy the beautiful neon city scenery.

Most tourists do not come here for the numerous sights. Most of them are attracted by the busy nightlife. Exclusive restaurants, nightclubs and shows, discos – there are a lot of them. Each of the places has its own unique image, but the level of service is high everywhere you go. The famous Casino is considered a place of rest for high society from all over the world. The Formula 1 Grand Prix in May is the main event of the country which attracts thousands of tourists from all over the world.

The terrain in Monaco:: Hilly, rocky.

There isn’t much of a transportation system here (given the size of the country itself). Monaco is connected to the rest of the surrounding world by railroads, motorways, airports and ferry services. Cabs and buses are common in the cities (scheduled, with an interval of about 10 minutes). A kind of “transport” – escalators. They take pedestrians to the streets above. You can rent a car. There are representatives of international rental companies in the country.

The main income of the country is tourism and casinos. Citizens of the country are not subject to income tax. The standard of living of this country is similar to that of France. The level of security here is the highest in Europe due to the fact that the local police system is the most powerful in the world.

The capital of the Principality is the eponymous city of Monaco (not Monte Carlo, as many people think). Its population is 4 thousand people. The city of Monte Carlo is known for its busy nightlife and the main concentration of casinos in the country and the center of business life.