In which mountain system is Mont Blanc located?

On the world map

The mountain range stretches along the French-Italian border up to Switzerland. For about 40 km (25 miles) extends southwest from Martigny (Switzerland). The maximum width of the massif is 16 km (10 miles). The peak is in French territory. In the vicinity of the mountain are the Gras Alps (south), the Chamonix Valley and the Savoy Alps (west), the Pennine Alps (northeast) and the Courmayeur Valley (east). Other major peaks include: Mont Blanc du Taquel, Mont Maudie, Aiguille du Guiant, Grand Jorace, Mont Dolan, and Aiguille du Midi.

Climate and weather on Mont Blanc

The best time for hiking and mountaineering is from mid-June to mid-September. Like everywhere else, the weather in the mountains is unpredictable. The good news is that meteorologists control the situation. A weather station is constantly operating in the area of the massif. Most weather maps show both the French and Italian sides of Mont Blanc, focusing on Chamonix and Courmayeur, respectively.

How to get to Mt.

It is served by a high-speed TGV train station (www.sncf.fr).

For transfers, don’t hesitate to contact the private or public services.

The Montblanc Express is the SNCF rail line. It serves all villages from Saint-Gervais-le-Faye to Martigny in Switzerland.

Directly on the Blanche freeway (A40).

From Italy: 15 km from the border through the Mont Blanc Tunnel. Information about the tunnel: www.atmb.com.

The following prices refer to a one-night stay in a standard room with a double bed:

The main routes are:

This is the most popular and “least” difficult route. It begins in Saint-Gervais, from where the streetcar leaves for the Nid d’Egle (“Eagle’s Nest”). From there, the ascent passes through the Goutera circuit to the hut of the same name, where it is possible to spend the night. Then, at 3 a.m., the climbers set off for the summit.

This is an excellent but very long route, much less used by climbers. There are several ways to get to the Grand Mulet Hut (3051 m). Start by climbing over the Mont Blanc Tunnel or from the Bosson Glacier cable car. Alternatively, take the Aiguille du Midi elevator and make a detour around the intermediate station above the glacier de Bosson. On the second day, pass the Petit Plateau as quickly as possible, avoiding the seracs. Then reach the Aiguille de Gran Monte and the Gran Plateau. Next, follow the path between the huts of Col du Dom and Vallo.

The route of the Three Monuments.

It is more physically and technically challenging than the previous one. It begins in Chamonix, from where the cable car of the Aiguille du Midi reaches the Col du Midi. Here you can spend the night in a hut Cosmic, or in a camp on the glacier itself. Then it is uphill via Montblanc du Tacul (4,248 m) and Mont Maudie (4,465 m).

The Cosmic Hut (3,613 m) is only a 45-minute walk from the Aiguille du Midi cable car (3,842 m). Then, at 2 a.m., you will have enough time to reach your destination and descend back to Nid de Aigle and from there take the streetcar that goes to Col de Vosa.

The nature of Mont Blanc is famous for its glaciers, valleys and dizzying views of the peaks. Among the animals are common:

They live underground and are easily recognized by their trademark “stance” as they stay upright as they look out for potential predators. If you seem dangerous, the main guard will warn his congeners to take cover.

The alpine ibex looks a bit like the common ibex, only the males boast curved horns with pronounced rings on the front. Conservation organizations have worked hard to protect the wild animals of Mont Blanc. They live at an altitude of more than 2000 m and on rocky terrain.

Once hunted for their valuable skin, which was considered waterproof and very strong. Nowadays, chamois are simply admired. Almost. Hunters can shoot them, but strict rules must not be broken. The chamois is smaller than a goat, has white spots in the front and a brown stripe along the back.

The first ascent was recorded in August 1786. It was undertaken by Jacques Balmat and Michel Paccard. The first woman climbed the mountain in 1808.

Depending on the amount of snow cover, the exact height of Mont Blanc can vary from year to year. The mountain actually has two peaks, with a distance of about 30 m between them.

In 2007, a hot tub party was held at the top of Mont Blanc. It involved 20 people who carried a portable hot tub to the very top, as well as equipment that could withstand the cold.

As in any mountainous region, human waste has long been a problem here. In 2007 a helicopter carried two portable toilets to an altitude of 4,267 meters.

The first Winter Olympics were held in 1924 in Chamonix, a town at the foot of the mountain. Mont Blanc is also considered the birthplace of modern mountaineering.

Consider altitude. Experts recommend spending three nights at 2,500 or 3,000 meters before climbing to the summit. The symptoms of mountain sickness are unpredictable, and the only cure is to go down. Dehydration will only worsen the situation, so you need to drink a lot at high altitudes.

Take care of the warmth. In this region the temperature drops from 0.33 to 0.91°C for every 100 meters above sea level. And on top of that there is a strong wind. On the summit, for example, the temperature without wind is -15°C, which corresponds to -30°C with winds raging at 60 km/h.

Always use sunscreen, a hat and special goggles for climbing, if necessary.

Consult your doctor before your trip, as he or she will prescribe antibiotics and anti-diarrheal medication, as well as recommend antihistamines, rehydration salts, etc.

In Europe, the emergency number is 112. In the vicinity of the massif, mountain rescue operations are handled by the Gendarmerie, based in Chamonix.

Do not climb immediately after a storm, as avalanches often occur at this time. Keep an eye on the weather forecast. May is considered the most dangerous month for climbing.

Avoid very steep slopes if possible. Those less than 25 degrees are the safest. If the slope is 30 to 45 degrees, then avalanches are more likely to occur.

If you’re hiking on glaciers, be careful of their tops, which can melt and break off during the warm season.

Mont Blanc is so beautiful that it is a must-visit. It is multinational and the highest peak in Western Europe. The top of the mountain is covered in snow and ice year-round, and when people talk about “climbing Mont Blanc,” by that they mean exploring the lower regions of the massif. 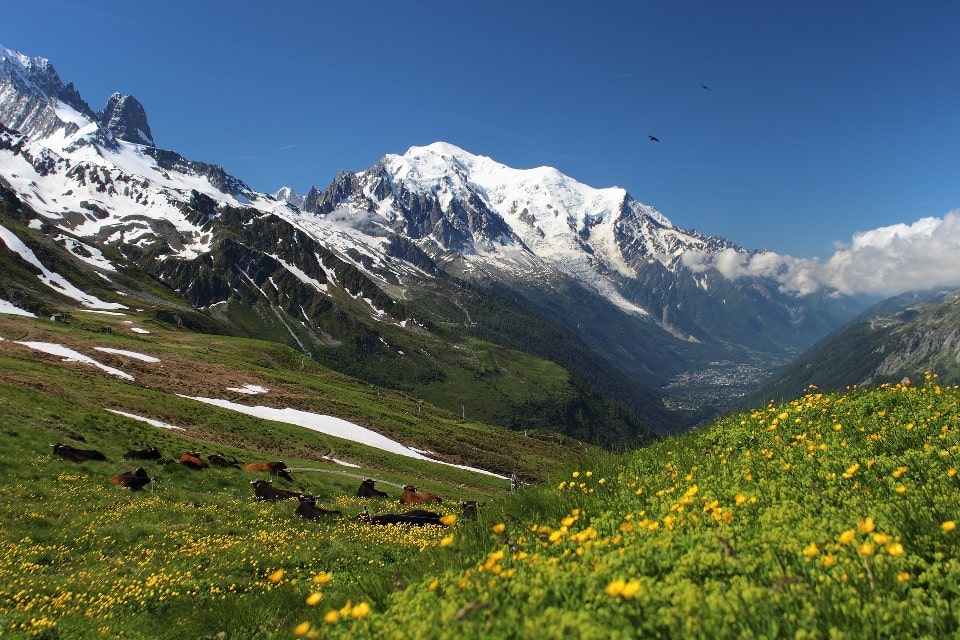 READ
Bobotov Cook and climbing the mountain, photo and description

In translation from Italian and French the name of the peak translates as “white mountain. This is quite natural, as Mont Blanc has a height of 4810 m, and therefore at any time of the year it is crowned with a snow cap. Along with Russia’s Elbrus, they are included in the list of “Seven Peaks” as the highest points of the European continent. This is due to the fact that there are different methods of drawing the boundary between Europe and Asia. According to one method, Elbrus is in Europe, while the other is in Asia. 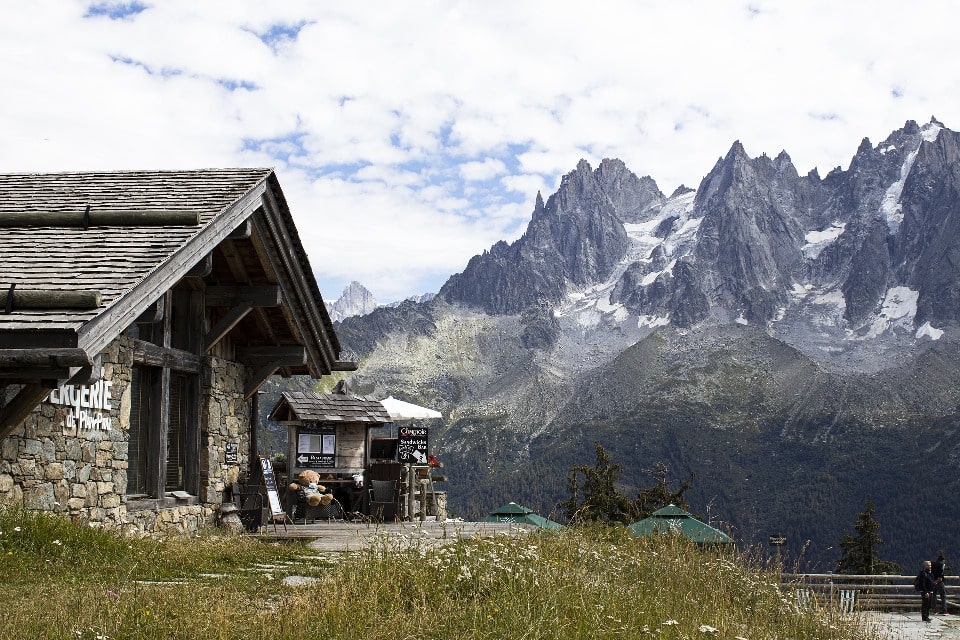 Mont Blanc is shared by Italy and France. On the French side the area is called Haute Savoie, on the Italian side it is called Courmayeur. The mountain once belonged entirely to France, but at the beginning of the XVIII century it “moved” to Italy. It went on like that more than once. The situation depended on the outcome of the wars that were going on continuously in Europe. The issue was resolved only in 1861 when the mountain was divided in half by drawing the border across its peak.

There is a stereotype that Mont Blanc is the summit. This is not quite true, as Mont Blanc is a mountain range of 50 kilometers long and has several peaks. In total, there are 19 of them. The lowest is Mount Eguyuy du Midi (3,842 m) and the highest is Mont Blanc (4,810 m). Since the name of the massif and one of the peaks are the same, there was confusion. Next in height is Mont Blanc de Courmayeur (4,748 m), and the top three are rounded out by Rocher de la Tourmette (4,677 m). All together they form a chain of mountains that resembles a toothed crown.

Time of the first

Mont Blanc has been conquered since ancient times. It is not known exactly when the first ascent was made. But with absolute precision we know when the conquest of the highest peak was documented. It happened in August 1786. The conquerors were the Swiss physician Michel-Gabriel Packard, accompanied by the Savoy guide Jacques Balma. It was they who inaugurated the era of mountaineering in the Alps. It was made possible by the Swiss geologist Oras Benedict Sossur, who promised a reward to whoever could find his way to the summit. 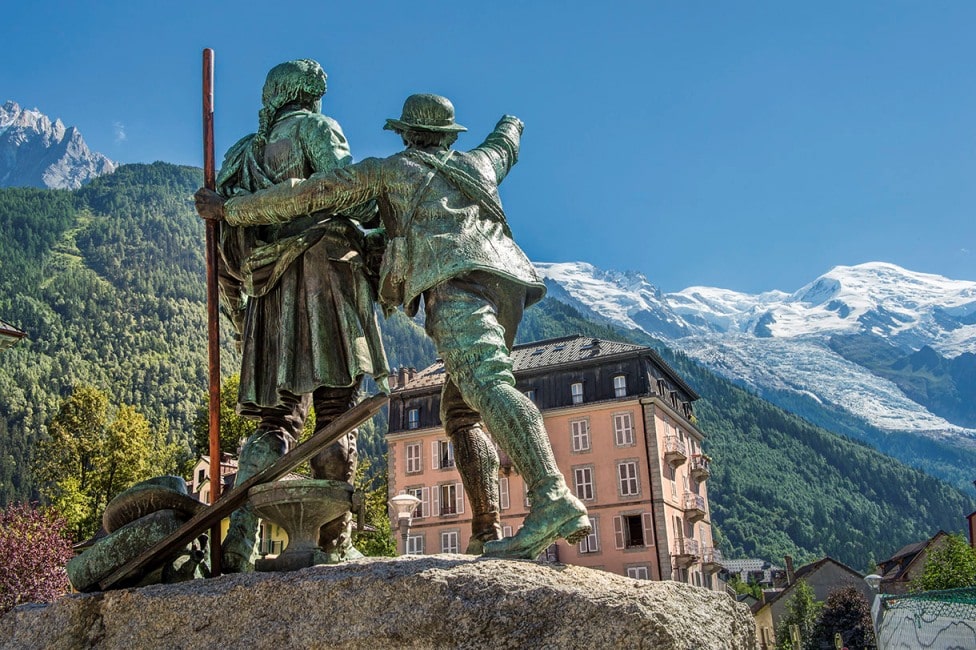 The ascent of Mont Blanc

Then there were other extraordinary climbs. Even today, women climbers are rare, and two hundred years ago it was quite exotic. One can imagine what a sensation the conquest of Mont Blanc by Maria Paradis was. In 1808 she deservedly received the title of the first woman to climb the Roof of Europe. The mountain did not ignore the attention of famous personalities. So in 1886 an expedition to Mont Blanc was organized by Theodore Roosevelt. The ascent had romantic connotations – in such an original way the future U.S. president decided to spend his honeymoon.

Rest with a view of Mont Blanc

We can not say that now the peak is a mass destination, but climb it quite a lot of climbers. In addition, the mountain is fond of hiking lovers. Especially for them was developed “Trek around Mont Blanc”. The route passes through the territory of three countries – France, Italy and Switzerland. It begins and finishes in a place called Les Houches. Its length is 170 km. The distance is usually covered in 7-11 days. 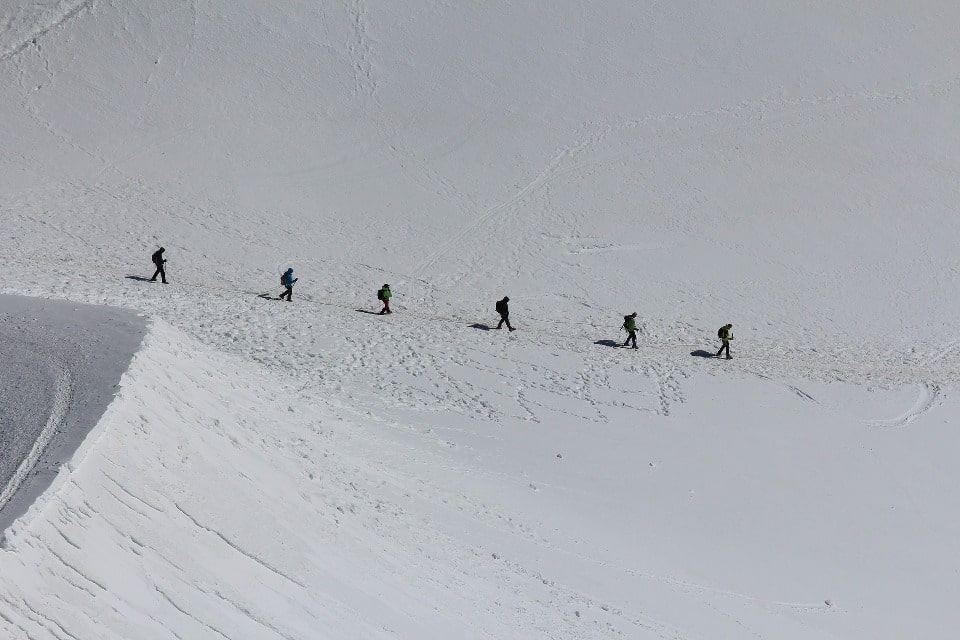 The maximum point of the route is considered to be the 2665 m mark. During the hike you can admire the fantastic alpine scenery. The route goes through several passes – Bellevue, Bonomme, Crewe du Bonomme and Seguin. The route is designed in such a way that after snow drifts you can swim in a river in one of the mountain valleys. Lake Combal on the Italian side is very beautiful. In the mountain villages you can buy authentic products – French, Italian and Swiss! 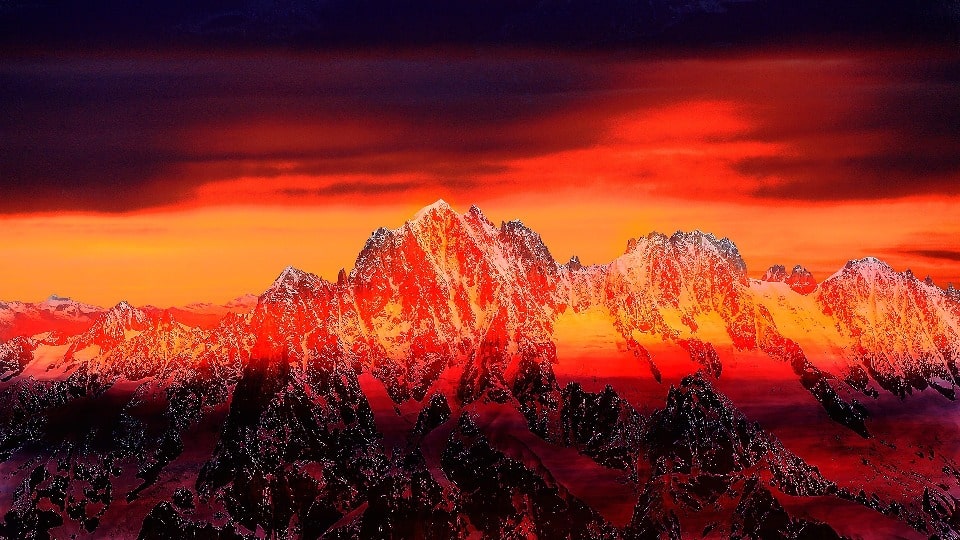 The most popular vacation spot around Mont Blanc is the French ski resort of Chamonix. This settlement was first mentioned as far back as 1091! Apparently, and in those days it was as good as it is now. However, the first tourists were attracted here only at the beginning of XX century. And all this because in 1924 Chamonix received the first Olympic Winter Games.