Monteriggioni is a medieval town in Italy

Monteriggioni is a fortified medieval village in the municipality of the same name in Italy. This amazing place will take you back to a time of knightly tournaments and medieval castles.

Monteriggioni is located 60 kilometers from Florence in the province of Siena in Tuscany. 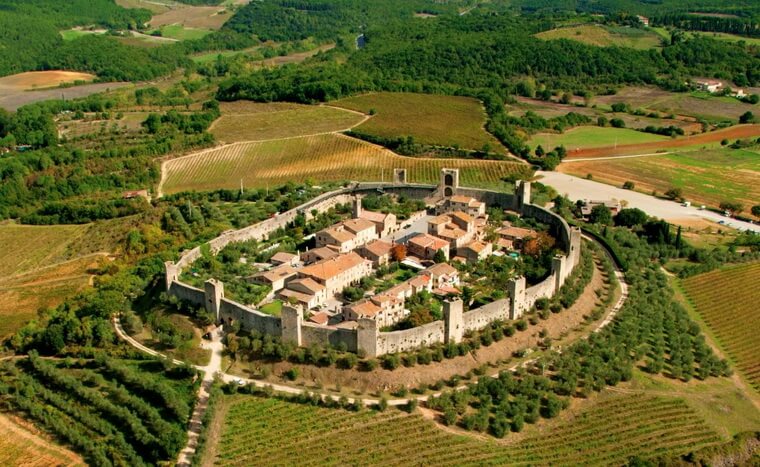 Monteriggioni is situated in a very picturesque place

In the Middle Ages cities had to rely on sturdy high walls to protect their populations from invaders. Numerous remnants of former defensive structures are scattered throughout Europe.

One of the most stunning examples of a completely preserved ancient fortress wall can be found precisely in Monteriggioni. In the Middle Ages, the towers of the fortress were so impressive that the Tuscan poet Dante mentioned them in his classic work, The Divine Comedy, describing the giants surrounding the fiery ring of hell.

The castle’s fortress walls were surrounded by a ring of coal, which could be set on fire if invaders invaded. Over time, Monteriggioni Castle became a small village. 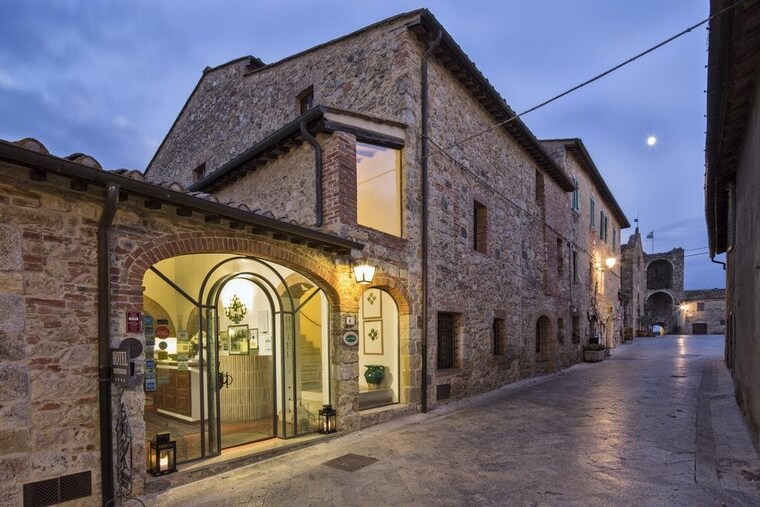 Walking through the stone streets of the village is like traveling back in time. The only significant change in Monteriggioni over the centuries was the gradual reduction of the towers. 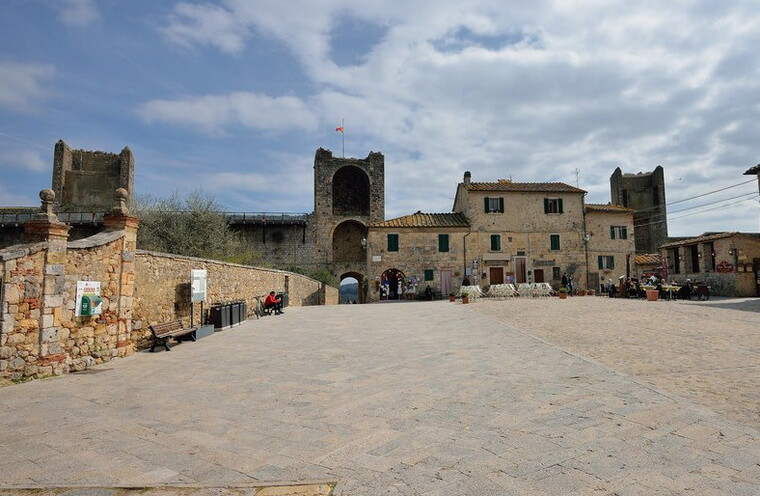 The central square of the town. From here you can clearly see that the towers on the fortress wall used to be taller. Note, the upper part of the towers is destroyed.

Dante would hardly have compared the towers of Monteriggioni to the imposing giants if he had seen them in modern times.

Monteriggioni was built by the people of Siena in the early 13th century to watch over the valleys stretching towards the hostile city of Florence.

Over the centuries, the castle walls fulfilled their primary function, repelling countless attacks and defending against sieges.

But the military component became less important in the second half of the 16th century. Then, in 1554, the entire state of Siena, of which the village of Monteriggioni was a part, was annexed to Florence by the Medici family.

In addition to being an interesting sight in the village itself, there are places to see.

The outer walls of Monteriggioni

The town and its fortress walls still retain their original 13th-century architectural features. It is one of the most unique medieval towns in Tuscany.

The outer walls of stone envelope the top of the hill in a continuous chain over 570 meters. The walls are crowned by 14 rectangular towers. 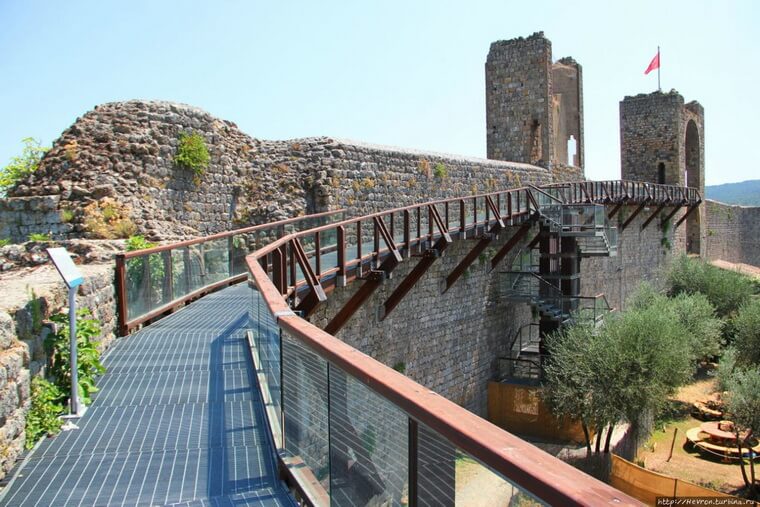 Any tourist can walk around some parts of the fortress walls. From here you can enjoy stunning views of the surrounding area

This gate is the main entrance to the city. 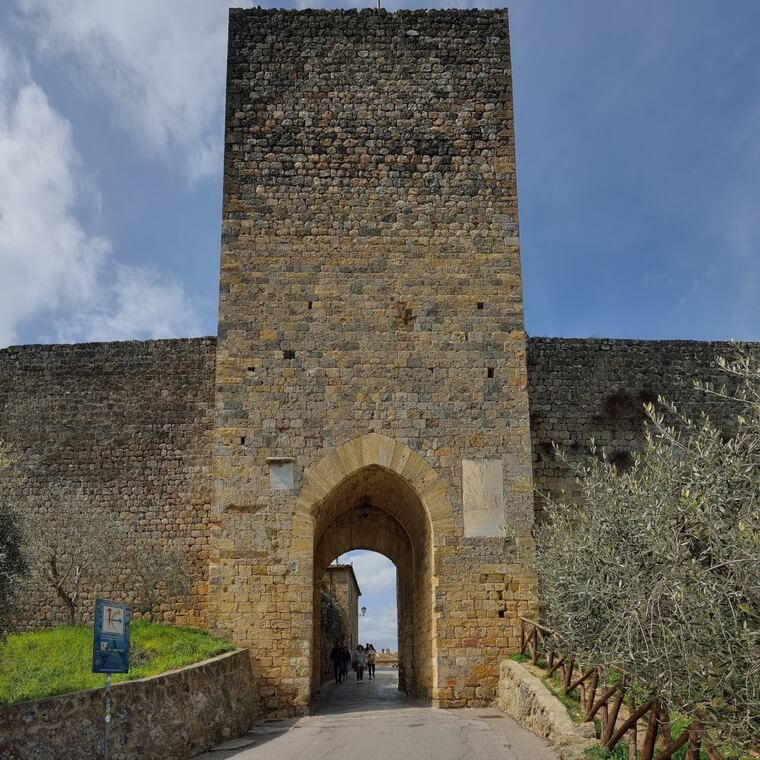 It faces Rome and is under a tower with a high pointed arch. In the past there must have been a drawbridge which was lowered to span the moat. However, the bridge and moat no longer exist.

To the left of the arch is an inscription proving the foundation of Monteriggioni in the 1220s. On the right, however, you will see a plaque commemorating the unification of Italy in 1860.

This church overlooks the main square of the city. It is perhaps the building that best preserves its medieval features. 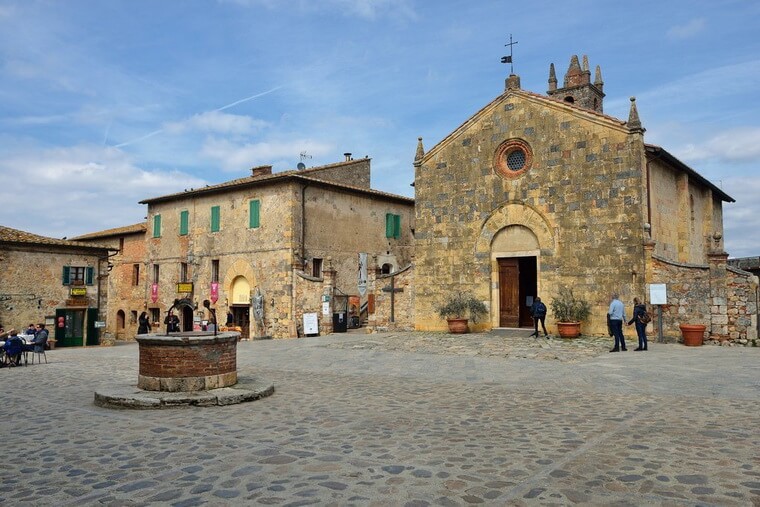 Built in the 13th century, it consists of a single rectangular-shaped interior space. On the elegant façade you see a doorway with a stone arch and a round window on top.

The interior has been updated in modern times. In addition to the 1299 bell, the church has a 17th-century painting of the Madonna and the Rosary. Every year in October, the inhabitants of the city celebrate the feast of this icon.

READ
Iceland's Black Beach. This is the entire south coast of the island

This museum houses exact replicas of medieval and Renaissance weapons and armor. 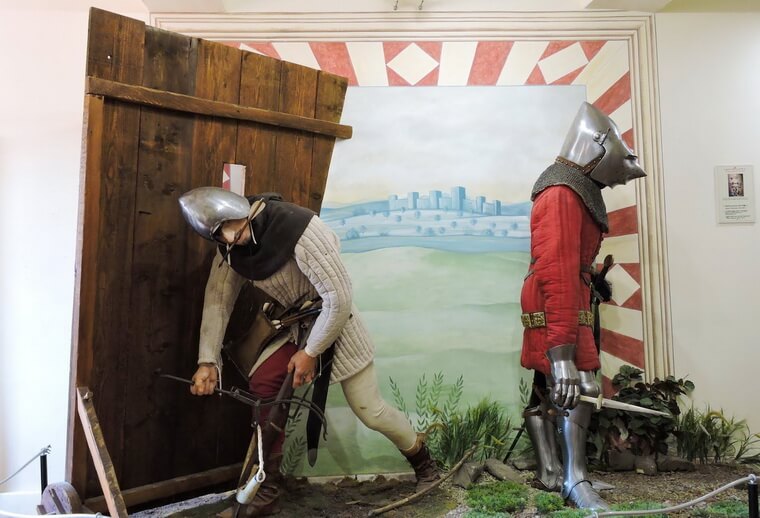 There are even detailed models of siege machines and equipment of the period. Each exhibit is dedicated to a particular moment in the city’s history.

Visitors can get an unusual experience with ancient weapons and armor, which are located in special rooms of the museum. You can even try on the knight’s armor. In addition, you will have the opportunity to wave (if you can) an ancient sword weighing 10 kg.

Every year in July, history buffs from all over the world flock to the Monteriggioni Medieval Festival. 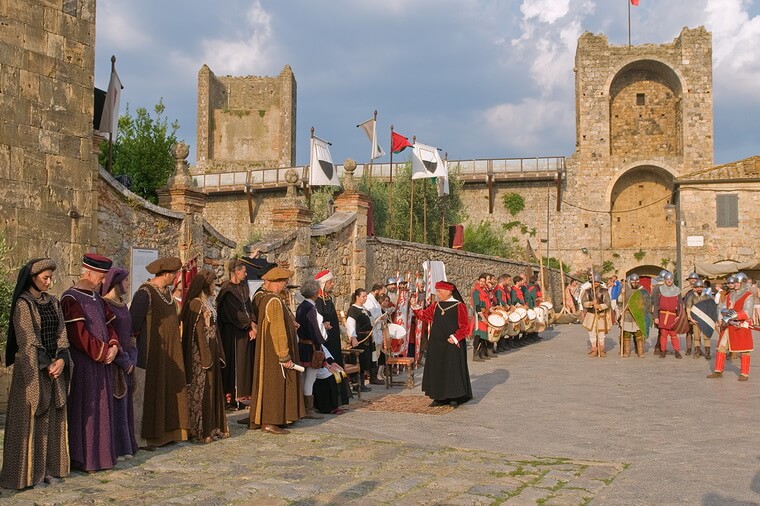 Some festival goers dress in knight’s armor and have medieval duels with long bulky spears and sword fights. And afterwards, everyone goes to restaurants together and eats medieval food and drinks.

Naturally, during this festival, many tourists rush to the Armory Museum to compare their swords and chain mail of the 21st century with the attributes of the real medieval knights.

For more information, visit the official website of the village of Monteriggioni. 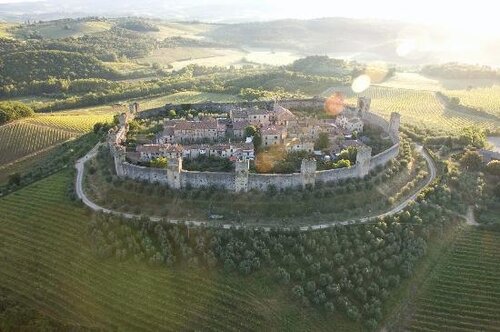 When I looked at photos of Monteriggioni on the Internet, there was not much interest to visit … for some reason, I had the impression that around the steppes, and think – some walls. In general, it is the case when there is a mention in all guidebooks, but from the only panoramic photo and description creates a different impression than the reality. In fact, everything is much more interesting. 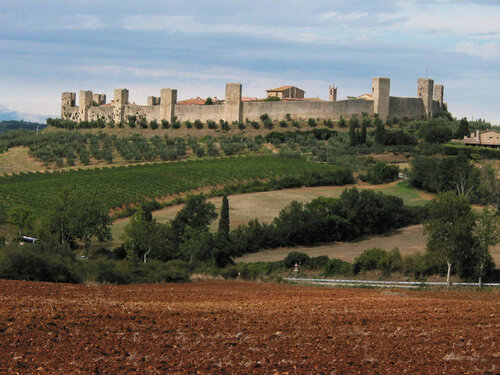 You can pass Monteriggioni from Siena to Florence, or from Florence to Siena. From the outside it looks powerful – towers and fortress walls grow in the middle of green fields and trees. Guides say that from the old road was amazing, but with the new this impression is not – I do not know what was the old road, but on the train and the bus looks city-castle impressive.

I suspect that they take tours there from Siena – 14 kilometers from it – I think they even combine it with San Gimignano. I’m not sure about the buses, when I looked at the schedules for the region, I did not see Monteriggioni.

I liked the other option better.

Trains from Siena to Forenza and Empoli go every 30 minutes. Every other train is 10 minutes longer due to two obscure little stations and a third one called Castellina – Monteriggioni.

If you get off at this station, it is Castellina Scalo, a small village, 11 kilometers from the real Chianti area, the village of Castellina in Chianti. So if you have a bike and want to, there are even special routes through Chianti on bicycles. You ride only the first 11 kilometers, and then everything is nearby – each “Chianti” village is 3 – 5 km from each other. I keep it in my memory for my next trip to Tuscany. 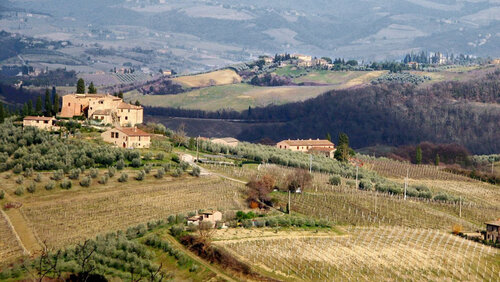 But towards Monteriggioni it is only 3 km. Walking through the fields is nice. Especially since the steppes I imagined there are not even a mention – groves, alleys, meadows, Tuscan landscapes. Olive trees, wine fields, in general – Tuscany. 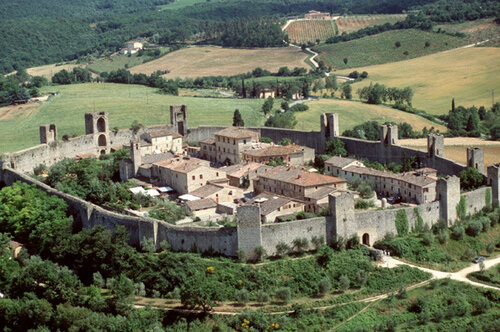 For a tour of Monteriggioni an hour is enough, if at each house to stop, head up, look around, every wall to stroke. It’s a tiny little village, but nice – from the side, looking at the towers, you can’t imagine that there are streets and squares. Although San Gimignano is a megalopolis compared to Monteriggioni. 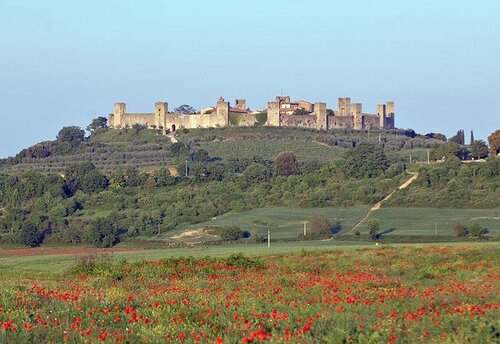 At least understand why Dante remembered Monteriggioni, so impressed by the towers that he immortalized them in the Divine Comedy.

In addition, it is considered a classic example of a fortress city and one of the best fortifications of medieval Italy.

A typical – you couldn’t ask for a better – medieval Italian village. (Or town – I do not know how to call it – so small!). 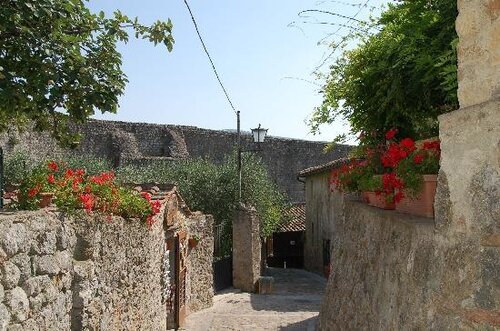 And in general there should not be any disappointment, one pleasure.

And in the first and second weekend in July in Monteridgioni a holiday – the famous Festa Medievale, enter the gate, and you’re in the Middle Ages – fortune tellers and chiromancers, magicians, nobles, peasants, around you jumping acrobats, playing ancient instruments, minstrels sing ballads. Officially considered one of the best medieval festivals in Italy.

Being in the Siena area, so to speak, Monteriggioni nevertheless belongs to the Elsa Valley. It was built in the 13th century by the Sienese as a military garrison to defend against Florence. Although still trying to play independence from both sides. But by 1554 Florence had extended its power to the area.

From the 60s of the 20th century, Monteriggioni has fallen asleep – there is almost no ordinary life in it… but something like a municipality – and even people live, although there are always many people – it is very frequented by tourists plus it is still a stopover for pilgrims going to Rome. 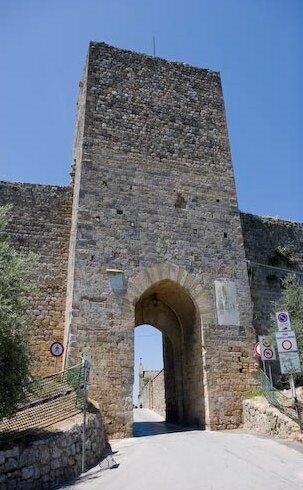 Two ancient gates lead into the tiny town – even regardless of the holiday, on a normal day, passing through the gate you pass the distance between modernity and the past. There was a third gate, too – for some reason, it was mortgaged.

The first gate, the Porta Franca, is mainly used by tourists – there is a parking lot nearby. The gate got its name from the path – Via Franchigena. Monteriggioni was, and still is, one of the stops for pilgrims on their way from Canterbury to Rome. 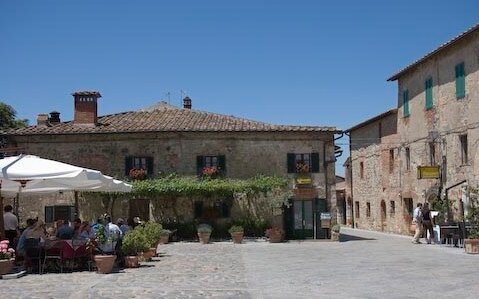 The central square is Piazza Roma. It overlooks the houses of aristocrats, rich merchants, and the Romanesque church of Santa Maria Assunta with a very simple facade. 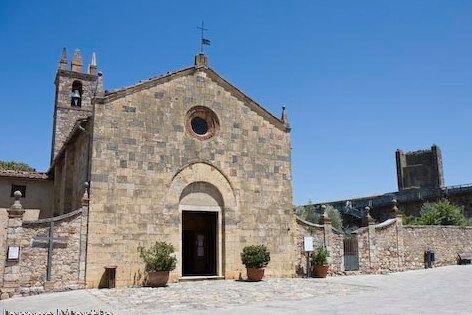 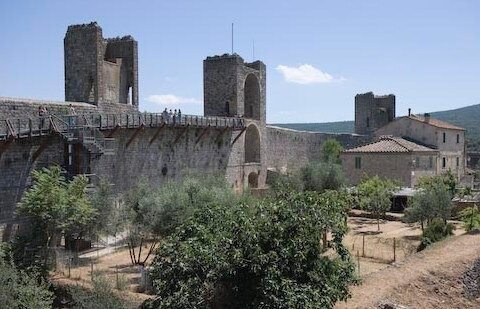 There’s a little museum – I haven’t been there, I can’t say what it’s dedicated to. In several places you can climb the walls (10 meters high) on the promenade for views of the town and the surrounding area. 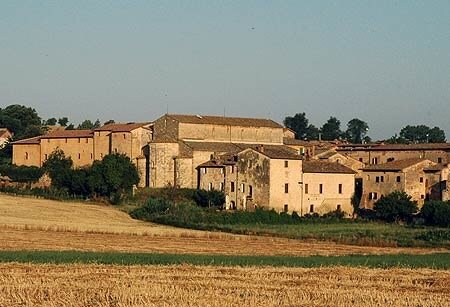 It is possible to combine a walk around Monteriggioni with another interesting place. The Abbadia Isola (church-isola) monastery is 4 km away, less than an hour’s walk away.

This Benedictine abbey was founded in 1101, also became a fortress fighting the Florentines in 1376, then came under the administration of the Sienese abbey of Sant’Eugenio in 1446. In fact, during the struggle with Florence, the abbey became a small village surrounded by fortress walls – Borgo Isola. 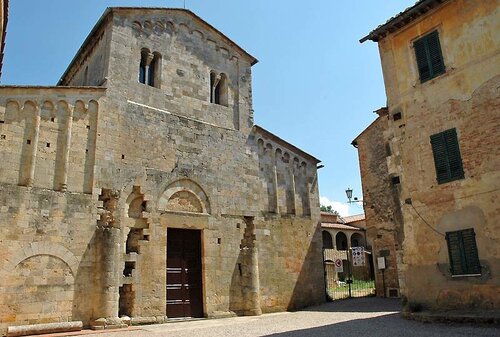 It was founded as a family monastery by a woman, Ava, widow of Signor Ildebrando Dei Lombardi di Staggia (the Signors owned Monteridgioni for a time). On Christmas evening, a special procession begins in Piazza Castello in Monteriggioni and ends in the abbey.

Izola overlooks Monteriggioni. And the locals consider it the best place for cycling – the terrain there is flat, there are no famous Tuscan hills. 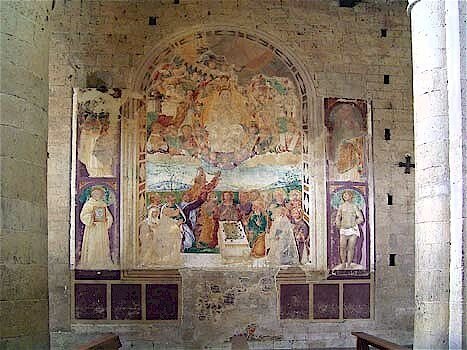 You can go to the church, see old frescoes, there is a restaurant – but in general a very abandoned place until the next religious ceremony – although tourists are taken regularly. 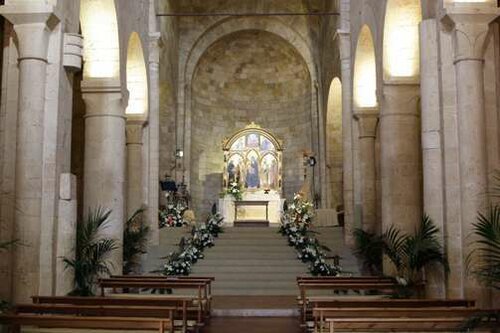 Photos of Monteriggioni from the air, of course, are not ours – but they give the impression that behind the walls hides an attractive little village