The uniqueness of Monument Valley is directly related to its origins. It’s hard to imagine that 250 million years ago there was a sea here. At the bottom of this prehistoric body of water, silt was collected and the weight of the sand compacted it into a porous sandstone. After a time unimaginable to man and unimaginable to the geological history of the Earth, the sandstone turned into shale. Nearly 70 million years ago, the earth’s crust had been greatly upturned, and fresh air and sunshine reigned where the seabed had been. The view must have been terrific – a huge sandstone plateau with a surface layer of shale and clastic rock was destroyed by downpours, chewed up by small rivers, and polished to a shine by the wind. Finally, in place of the indestructible machismo were rocky columns.

The valley is known around the world, and of course to you, for the western movies starring the legendary John Wayne and other Hollywood cowboys. The Monument Valley landscape is among the 100 most famous natural wonders. Standing alone in the flat, sandy desert, the huge red table mountains, sharp peaks, and steep slopes have been shot countless times for movies and colorful magazines. But even if you have seen these pictures, you will be amazed at the reality of the deep bright colors and the variety of shapes of these formations. The best commercials for Marlboro cigarettes were filmed here, too.

The valley is on the Navajo Indian Reservation, which has the exclusive right to guide you through the reserve, so it is advisable to arrange for a guide in advance or when you arrive at the site. Without a guide, unlike in national parks, you get much less for the same or higher entrance fee. For example, a tour of Monument Valley takes about an hour. You can only do one short lap by car with a few stops along a sandy, unpaved road. The information pamphlet received at the entrance contains many prohibitions and warnings: no climbing on the rocks, no hiking as there are no hiking trails, no driving off the trail, no entering houses or photographing Indians, a ban on liquor on Navajo land, and so on.

To tourists, Monument Valley appears as a cluster of fantastic dilapidated castles, ancient temples, and modern skyscrapers, columns, and spires. In fact, the unusual shape of the structures was chosen by nature without any backward thinking.

This does not prevent locals from “humanizing” geological monuments with names: Castle rock, an imposing massif with a flat top, 300 m high, topped with toothed turrets. Rukavichki, the rock formations next to each other, Broody, which looks like a chicken, Merrick and Mitchel, natural replicas of giant tombstones, Prioress, Three Sisters, and so on.

Most of the attractions of Monument Valley are concentrated around the town of Goulding. This settlement, 250 kilometers far from the nearest city (Flagstaff, Arizona), was founded in 1923 as a trading station, conducting a trade with the Indians. Today the economy is based on tourism.

The views from the Visitor Center are spectacular, but you can see the park by taking the 27-kilometer-long Valley Drive. It winds among dramatic cliffs and bizarre rocks, including the famous Totem Pillar, a huge spire 91 meters high and just a few meters wide. Here you can explore ancient cave dwellings, natural arches, and petroglyphs.

Over the past century, the Monument Valley has changed, as the processes of erosion are constant. It may well happen that in hundreds of years the majestic sandstone plateaus will be nothing but a flat dismal plain, hurry up.

Monument Valley is the spirit of the Western. USA

If you see two tough-looking guys standing in front of each other on your TV screen, ready to take the colt out of its leather holster and swiftly shoot your opponent right in front of the saloon, just waiting for the slightest excuse, you already know that this movie is of the Western genre. Dashing cowboys race across the prairies catching up with the Indians (or vice versa), the Redskins chief smokes a pipe of peace and buries the hatchet, all this action is accompanied by the music familiar from childhood and … classic landscapes of the wild, wild West. In all likelihood, you’ll see one of America’s most massive, famous and simply beautiful landmarks in the background in these movies – Monument Valley.

Don’t tell me you haven’t seen westerns and seen these landscapes. 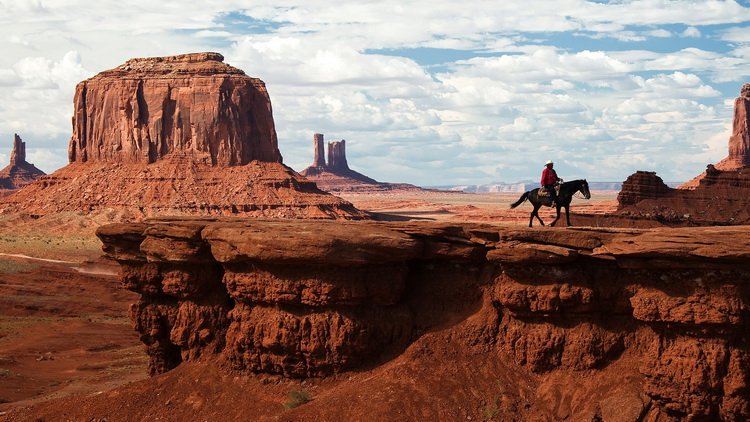 It’s not a scenery, it’s a real place. Monument Valley is located in two American states, Arizona and Utah, right on their border, on the lands of the Navajo Indians. The Indians themselves called this area “The Place Between the Rocks Where There Are No Trees.” The cliffs are part of the Monument Valley Navajo Tribal Park, which is owned by the Navajo Nation.

Monument Valley on a map

How Monument Valley came to be

Monument Valley is rock left over from the endless weathering of parts of the Colorado Plateau. The softer rocks have been eroded away by erosion over time, but the denser red sandstone rocks now rise above the prairie.

These rocks are called remnants by geologists. But they, too, are subject to erosion. Look, you can see the characteristic rubble of sand and rock fragments around the rocks. 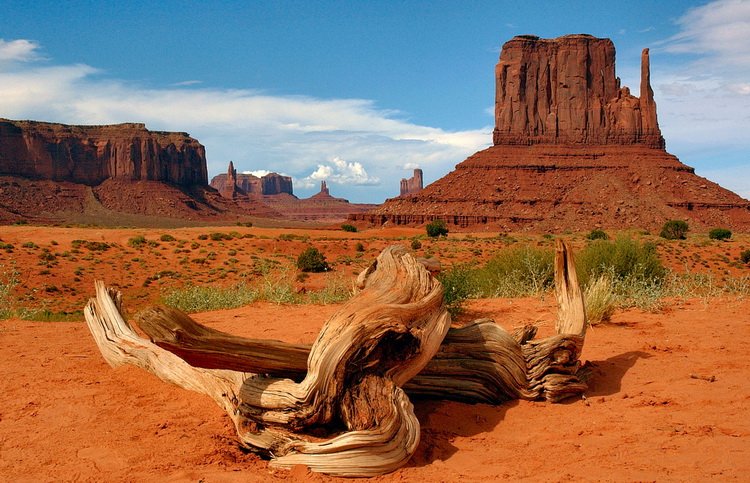 The process of formation of such mountains is as similar as possible to the process of appearance of giant stone mushrooms in the Akkurum tract in the Altai.

The huge rocks in the middle of the plain covered with stunted vegetation look amazing and unreal. The most known rocks of the Valley of Monuments even have own names. They are the Three Sisters, the East Mittens, and the West Mittens. If you look at these mittens from a distance, you get the feeling that they are mirror images of each other. 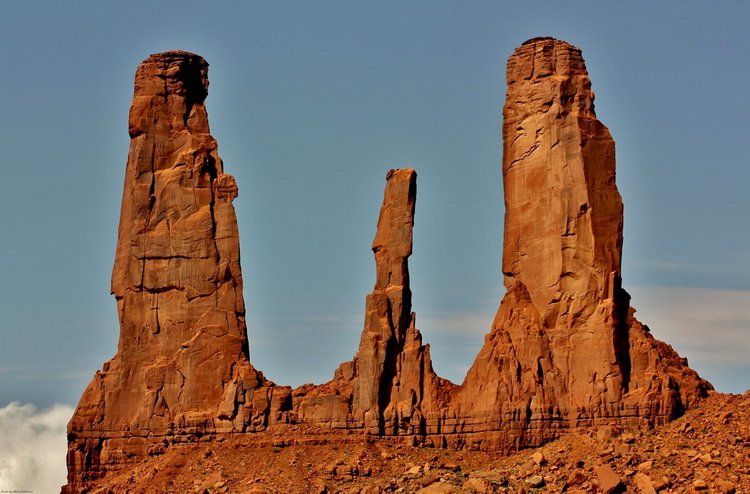 If you visit the valley, you should pay attention to another attraction.

Nestled 30 kilometers northeast is one of the most unusual natural sculptures in the world – Mexican Hat (Mexican hat, or simply Sombrero). This amazing formation weighs tens of tons and balances almost on the end of a needle, ignoring the laws of gravity for hundreds of years.

The Mexican Hat is about 18 meters wide and up to 3.7 meters thick. This formation is located near the town of the same name. 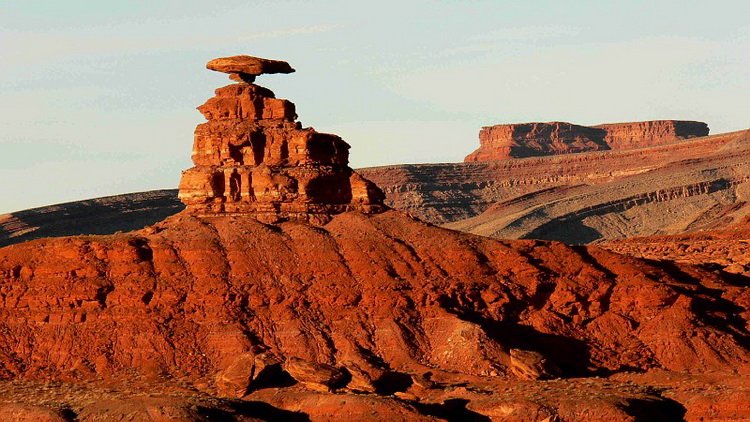 Settlers were not able to see and visit Monument Valley until the second half of the 19th century, when the bloody wars with the Indians were coming to an end. But it was not until the first half of the 20th century that the rest of the world became aware of the site.

READ
Horsetail is a waterfall of fire . California. USA

At that time, Harry Goulding settled in these places and organized a small firm. He hoped that the beauty of the valley would attract travelers. But things were not going well. For 10 whole years, Harry practically “stomped in place. But one day he made up his mind and headed to Hollywood with pictures of Monument Valley.

Far from immediately they appealed to the directors. Harry, along with his photographs, was constantly sent to different offices until he came to the attention of director John Ford. He really liked the pictures of Monument Valley, and as a result, in 1938 there was a western called Stagecoach. Since then, the fame of the landmark spread across the planet, and Harry Goulding’s business went uphill.

Later, not only classic westerns were filmed here, but also scenes from such famous movies as McKenna’s Gold, the second and third parts of Back to the Future, Forrest Gump, and many others. Many times music videos and commercials have been filmed.

Since the land and the park are owned by Native Americans, you have to pay for the right to be there. The park is actually open to tourists year-round, but has certain hours of operation. In summer, from May to September from 8 am to 8 pm. In winter, October through April from 8am to 5pm.

You can explore Monument Valley on foot, and there is a short trail for that. On horseback, feeling like a cowboy or Indian. But the best option is to take a drive. There is a road through the park with parking lots at the most famous and notable rocks. You can walk the valley on your own or as part of an organized tour group with a guide.