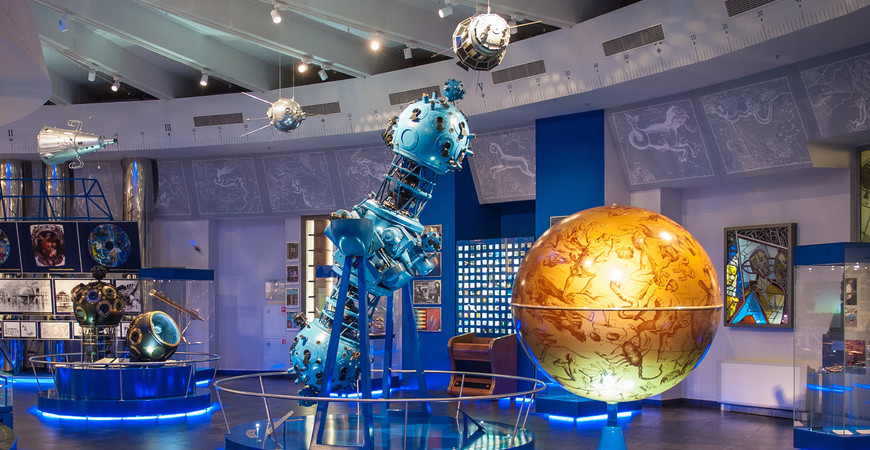 The Moscow Planetarium is among the largest planetariums in the world and is also the oldest operational planetarium in Russia.

The planetarium building in Moscow is an architectural monument and an object of cultural heritage, built in 1927-1929. It is located near the Garden Ring, within walking distance of the Barrikadnaya and Krasnopresnenskaya metro stations. Nearby is the new territory of the capital’s zoo, and there are several interesting museums in the area.

Online tours of the Moscow Planetarium

The Virtual Planetarium is a big project that allows you to get acquainted with the exposition online and, most importantly, watch and listen to the best lectures about the cosmos, as well as learn the entire history of the Moscow Planetarium.

Videos are available on the official YouTube channel of the Moscow Planetarium:

The YouTube channel, however, does not limit the planetarium’s educational online activities; the official website even has a dedicated section dedicated to all open-access projects:

A detailed tour of the Moscow Planetarium, official video

Schedule of shows at the Moscow Planetarium

Cognitive films about space can be seen at the planetarium from Wednesday to Monday. The day off is Tuesday.

The poster is always diverse, and there are a lot of sessions during the day.

Current information can be found on the official site:

Prices at the planetarium in Moscow in 2022

Entrance to the Moscow Planetarium on Google Maps panoramas

Ticket offices are open daily from 10:00 to 21:00. E-tickets are also available on the official website:

The scientific complex has modern equipped halls and exhibition areas with expositions and thematic museums. The building has a total of four levels, including the lower, underground level.

Hall for children, has a domed screen to show popular science films and is often used to produce its own films. It is located on the lower (underground) level of the planetarium.

An interactive children’s museum with interesting physics and astronomy exhibits located on the lower level and an exhibit on the history of space exploration located on the first level of the building.

Includes two halls, on the first and second levels. In the first hall one can see successively developed instruments and equipment for cognition of the Universe, including instruments for navigating by stars. There is also an exposition devoted exclusively to the history of Moscow planetarium: books, photos and some equipment (legendary “Planetarium” devices #13 and #313). An exhibition of meteorites, globes and a model of the solar system is in the second hall of the Urania Museum.

Video tour of the Urania Museum

Observatories of the Moscow Planetarium

An open-air astronomical site with several instruments: astronomy (classical, ancient and telescopic), sundials, globes and other exhibits that were once of practical importance.

The planetarium’s outdoor exhibit, “Park of the Sky,” on Google Maps panoramas

Located on the last, third level, directly under the dome, its projector allows you to see more than 9 thousand celestial bodies and their movement across the sky. As in the Small Hall, 4D film screenings are held here.

One of the new projects of the Moscow Planetarium. Interactive children’s programs are designed for children of different ages, individual and group applications are accepted.

Also in the building there is a photo studio and a souvenir store “MKS”. A map of the planetarium can be seen on the official website.

From the Moscow Planetarium to the zoo can be reached in a few minutes, which is very convenient for viewing objects in one day.

Moscow Planetarium on Google Maps panoramas – view from the zoo

You can get to the Planetarium from any of the railway stations in Moscow by subway. For this purpose you are to change to Tagansko-Krasnopresnenskaya branch (there are stations of Circular branch near big railway stations) and to get to Barrikadnaya station.

From the side of Shchelkovsky bus station you can get by subway with two changing stations – “Ploshchad Revolutsii” and “Tverskaya”. The trip will take about 45 minutes.

The stop in front of the Moscow Planetarium is Malaya Nikitskaya on Sadovo-Kudrinskaya Street. You can get there by buses B, T110, T39, 869.

In addition, moving around Moscow is facilitated by various services – cab apps (Uber, Gett, Maxim, Yandex. Taxi), carsharing (Delimobil, Anytime, Belkacar, Lifcar). And you can find parking near the planetarium with the help of the Moscow Parking site.

All about the Moscow Planetarium in 2021

The Moscow Planetarium (1927-1929) is one of the largest among similar scientific and educational institutions in the world. In its star halls, Moscow schoolchildren study natural phenomena and the laws of physics, and their parents add new facts to their astronomy course. We will tell our readers what programs the planetarium offers in Moscow, prices and schedule in 2021 and how to get there by public transport. 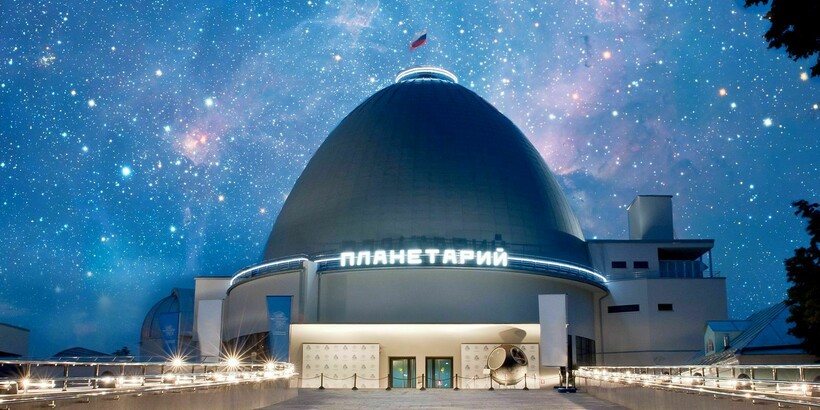 The main purpose of the Moscow educational center was to popularize knowledge of astronomy and physics among Soviet citizens. It successfully copes with this task today, and the official website of the Moscow Planetarium gives visitors a list of educational programs:

IN INTEREST! In 2021 during the modernization of the building they opened a 4D cinema. On the screen – a colorful picture, in the hall – dynamic chairs and special effects: smells, wind, smoke.

Designed to show the starry sky with the help of a new generation projector “Universalium M9”. The device is capable of projecting up to 9000 stars on the dome (diameter – 25 m, area – 1000 m²). Sessions in Moscow are accompanied by surround sound and stereo effects. 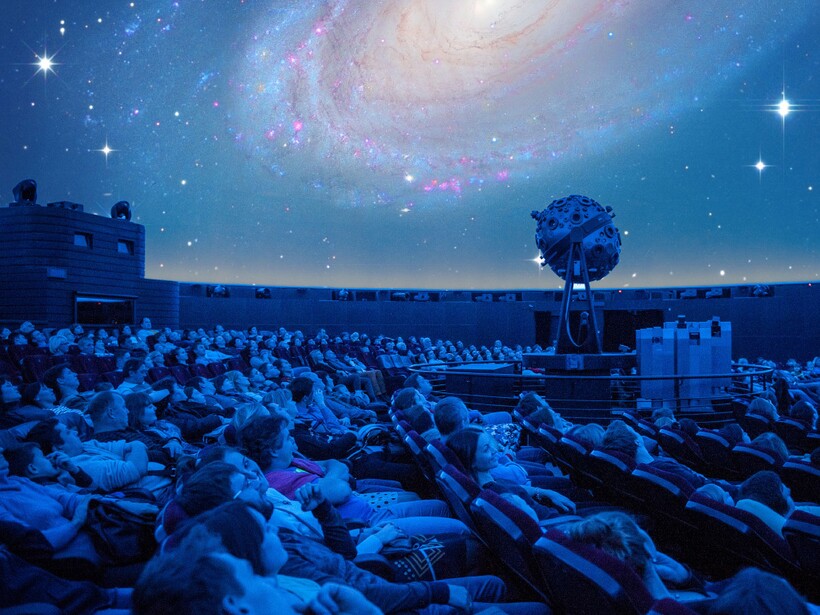 In this hall video programs for children from 4-10 years old are shown:

Children under 10 years old may attend only together with an adult.

This is an interactive museum (planetarium in Moscow) with an experimental area, where inquisitive visitors can touch the exhibits with their hands and make sure that in a vacuum pen and stone fall at the same rate, and learn to control the docking of the module with the space station.

There is an instruction manual near each exhibit. You can ask questions to the caretakers – senior students of the physics department of Moscow State University and other specialized universities in Moscow. 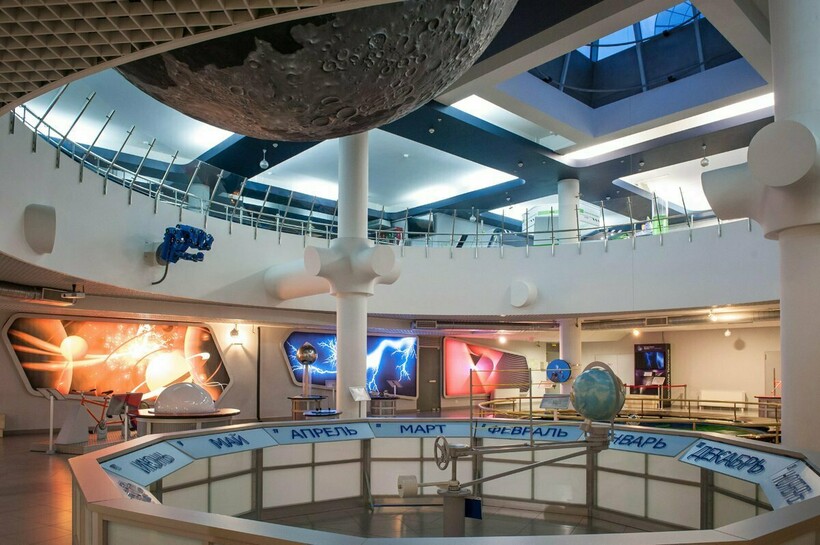 Here the history is carefully preserved: archive photos of Moscow planetarium, documents, as well as two former projectors, which lit stars under the Moscow dome until 1977 and until 1994. In the hall there are astronomical instruments of seafarers of the era of the Great Geographical Discoveries.

On the second floor of the museum in Moscow is a collection of “aliens from space”, meteorites. Some of them can be touched with hands, and the staff assures that if you make a wish, it will come true for sure. 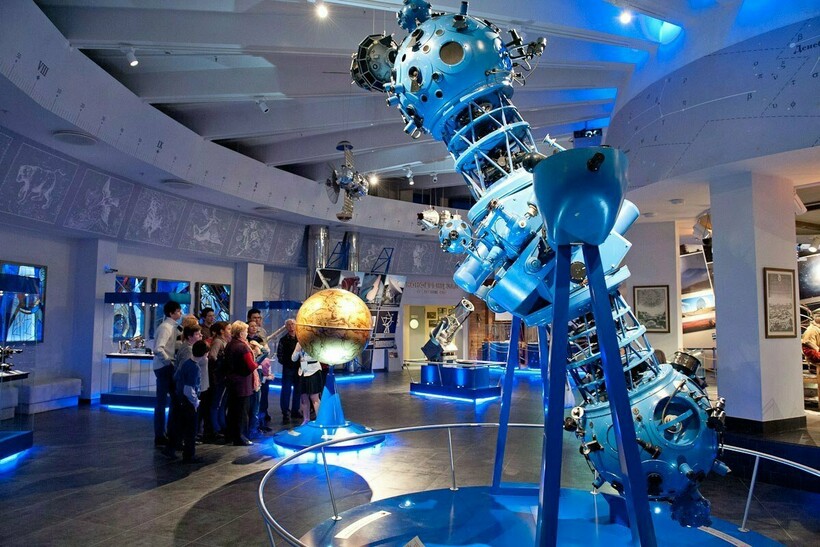 Observatories of the Moscow Planetarium

These are two separately standing domed buildings, from where the latest optical instruments are used to observe astronomical objects. The 400-millimeter telescope from the Little Observatory in Moscow is used only by scientists for research purposes. 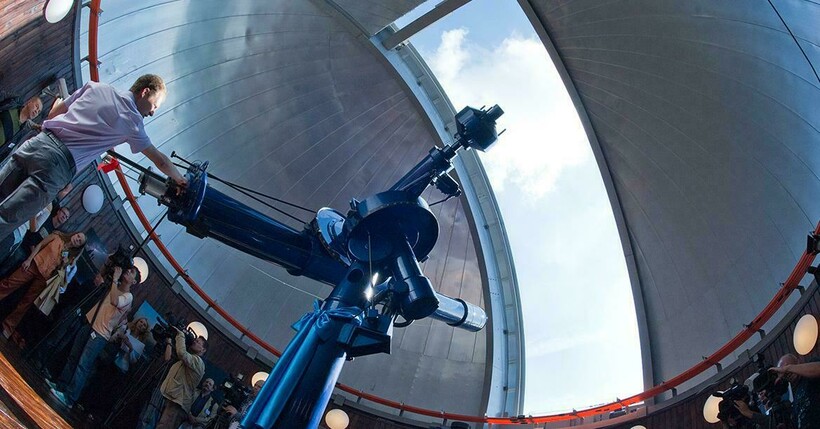 In the Big Observatory in the 300-mm telescope Zeiss can look tour participants “Walk in the Park of the Sky. The observations are carried out from May to September with cloudless weather, to specify the weather report on the day of visit, the planetarium phone in Moscow – +7 (495) 221-76-90.

There is a collection of astronomical instruments from the ancient sundial to the modern inventions in the open air in Moscow. The uniqueness of the exhibits is that they can be used for their direct purpose: to determine the position of the Sun and other planets above the Moscow horizon. The park is open for visitors from May to September. 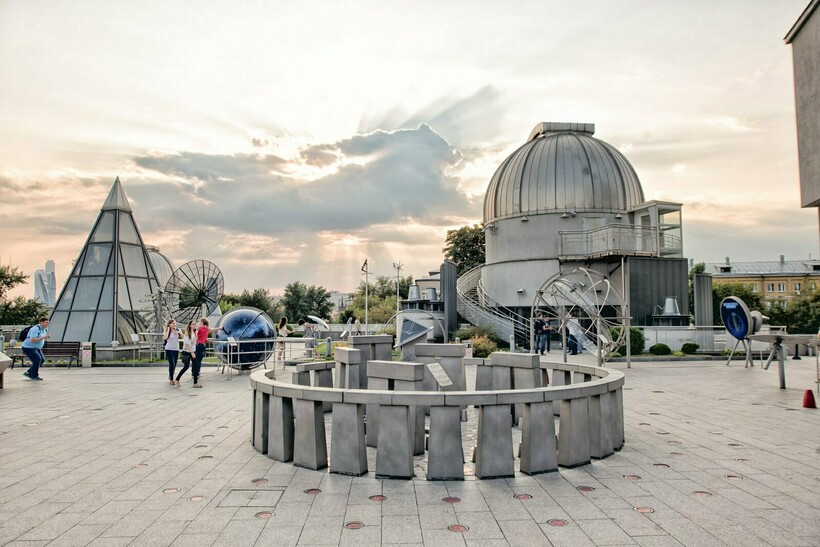 INTERESTING! In Soviet times there was a model of Earth – Moon in the Park of the Sky. Tourists were told the scale and offered to find the moon model. Few were able to cope with the task: the moon model was installed on the roof of a house in Moscow opposite the planetarium.

This is a series of 10 children’s educational classes about the laws of nature. Each lasts up to 50 minutes. Children find answers to questions such as where rainbows come from, how to tell time without clocks, and how to tell the Big Dipper from the Little Dipper.

The new 2021 program, Constellations of the Argonauts, teaches how to navigate by the stars of the Southern Hemisphere. Adults can attend a session with their child for free.

Séance schedule at the Moscow Planetarium in 2021

Schedule for children’s programs in the Little Star Hall: 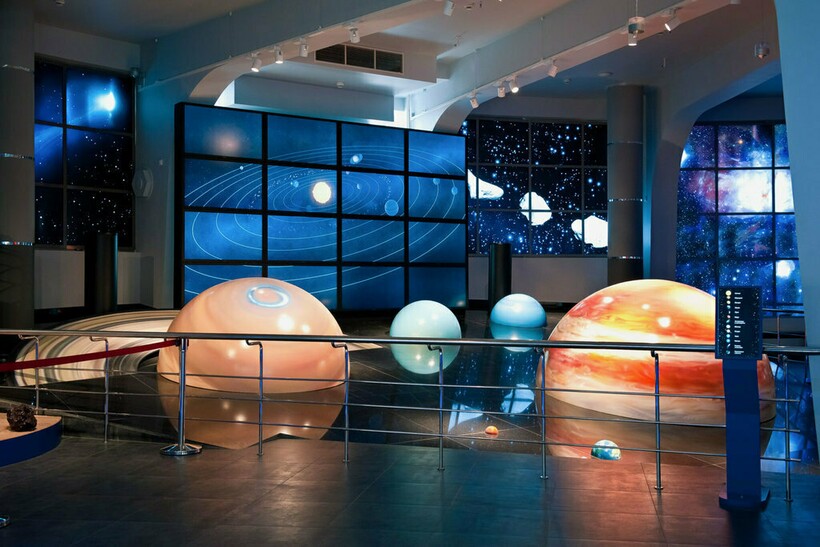 Ticket prices in the Moscow Planetarium in 2021

Due to the epidemiological situation, you can only buy a ticket to the Moscow Planetarium online, the cost of a visit is:

For the Great Hall of Stars, the price of a ticket to the planetarium in Moscow in 2021 includes a visit to the Urania Museum (one hour before the session) and the “Park of the Sky” site (after the session).

How to get to the Moscow Planetarium

The exact address of the planetarium in Moscow: Sadovo-Kudrinskaya street, 5, building 1. The entrance to the territory is between houses number 3 and 7.

On the Moscow metro

The nearest metro station near where the Moscow Planetarium is located is the Barrikadnaya metro station. The way about 650 m on foot takes 7 min. You can get off at “Krasnopresnenskaya” station – in this case you will have to walk 200 m more.

Restrictions due to COVID-19

For the duration of the pandemic, the management of the education center in Moscow introduced new rules:

The box office does not work, visitors must buy tickets online on the website by clicking on the “Buy a ticket” link.

IN INTEREST! In the souvenir store you can buy not only meteorite fragments, but also food for astronauts in tubes. There are in assortment space borsch, meat puree with side dishes, curd desserts and compote. 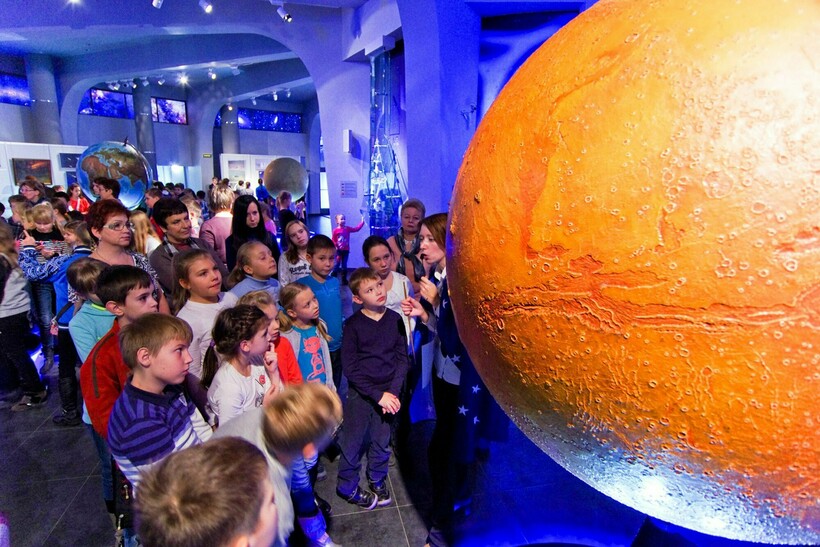 Due to the fact that a visit to the Lunarium is meaningless without tactile interaction with the exhibits, the museum is temporarily closed. Many astronomy lectures and circles for Moscow schoolchildren have been converted to an online format.

Despite the limitations, it is worth visiting this scientific and educational center in Moscow, where information about the latest scientific discoveries in the field of space becomes available to all comers.