The Moscow Metro is a transportation company associated with increased danger. Rules for use of the Moscow Metro, Regulation 1.2.

Moscow Metro was opened on May 15, 1935. Nowadays transportation system consists of 250 stations (3 are closed for reconstruction) which are the part of 13 lines with the length of 435.7 km. The system also integrates the Monorail, the Moscow Central Ring and the Moscow Central diameters. Most of the tracks and stations are underground, but there are sections located both on the surface and above it. The main idea of the Moscow Central Ring Road is to use the Moscow metro system as a base for interchange between Moscow and St. Petersburg. The length of platforms of most stations is 155 m (8 cars), the length of platforms at the new stations is 162 m. The width of subway track is similar to the one used in Russian railways – 1524 mm. Internal diameter of the circular single-track tunnel is 5,1 m (5,5 m on the first lines), internal dimensions of the rectangular tunnel – 4,16×4,4 m. The tracks over the rivers pass through the subway bridges. There are 5 open and 6 closed metro bridges. The metro is served by 20 electric depots. Average speed of trains is 46-72 km/h. The passenger flow of the Moscow Metro is more than 2.5 billion passengers per year (2018 data), the 6th busiest in the world.

Structure of the Moscow Metro

The Moscow Metro is a complex transportation system in terms of its structure. Different organizations are involved in the design, construction and operation of the subway.

The Moscow Metro is operated by the State Unitary Enterprise “Moscow Underground” founded in 1935. There are 24 thousand employees at the enterprise serving more than 8 million passengers a day.

The organization consists of dozens of departments, services and divisions:

Construction of Moscow Metro can be divided into several periods.

Planning and beginning of construction

The first realized project of Moscow Metro construction could be considered the project of 1930, developed by the Moscow City Railway Department (MGZhD). In 1931 the architectural bureau of Metrostroy submitted the same project with minor corrections, and in 1933 a technical project stipulating the construction of deep-laid sections was approved.

In fact, construction of the first line began in the end of 1933 and on May 15, 1935 the Moscow Metro was opened for passengers. The first line included 13 stations and went in two directions – from Sokolniki to Okhotny Ryad, and further to Park Kultury or Smolenskaya.

The construction of the third line was started in 1940, but due to the threat of Moscow capture the works were suspended until 1942. The section from Teatralnaya to Avtozavodskaya was put into operation in 1943, and the section from Kurskaya to Partizanskaya at the beginning of 1944.

After the war, construction of the fourth stage of the subway began. The section of Koltsevaya line from Park Kulturi to Kurskaya was launched in 1950, and from Kurskaya to Belorusskaya in 1952. Construction of the line was fully completed in 1954. In 1953 a new deep section of Arbatsko-Pokrovskaya line from Ploshchad Revolutsii to Kievskaya began to function, while the old line was closed.

The period of typical projects

Since the mid-50s the main focus has been on making construction cheaper by using standard designs and reducing the cost of station design. From 1957 to 1963 the Sokolnicheskaya line was extended south-westward to the station with the same name, and in 1966 north-eastward to Preobrazhenskaya Square (in 1990 – to Bulvar Rokossovskogo). In 1958 a section between Kievskaya and Kutuzovskaya of Filevskaya line was built. From 1959 to 1965 the line was extended to Molodezhnaya, and in 1989 to Krylatskogo.

The Riga (1958), Kaluzhsky (1962), Tagansky (1966), and Krasnopresnensky (1971) radii were also built during this period, and were connected into diametrical lines in 1971 and 1975, respectively. Similarly, Kalininskaya (1979-1986) and Serpukhovsko-Timiryazevskaya (1983-1994) lines were built. Zamoskvoretskaya, Arbatsko-Pokrovskaya and Kaluzhsko-Rizhskaya lines were also extended before the collapse of the USSR.

In 1990 some stations were renamed. In 1994, the northern radius of Serpukhovsko-Timiryazevskaya line was finished, from 2000 to 2002 three new stations in the southern radius were introduced. In 1995, Lublinskaya line from Chkalovskaya to Volzhskaya was opened. In 1996 the line was extended to Maryino, in 2007 the stations Sretensky Bulvar and Trubnaya were opened in the north.

READ
Aparthotel what is it

In 1995 branches from Zamoskvoretskaya line were formed into a separate Kakhovskaya line. In 2003 the Arbatsko-Pokrovskaya line station Park Pobedy was opened, in 2008 the line was extended to Strogino having included a part of the Filovskaya line and in 2009 to Mitino. In 2003 Butovskaya light metro line was opened. In 2005 and 2006 Vystavochnaya and Mezhdunarodnaya stations were opened as branches from the Filevskaya line.

In January 2008 Monorail was included in the transport system.

From 2010 to 2011, the Lublinsko-Dmitrovskaya line was extended in both directions, including two new sections. In 2016, the northern radius is extended to Petrovsko-Razumovskaya station, and in 2018 to Seligerskaya station.

In 2013, the Vykhino – Zhulebino section of the Tagansko-Krasnopresnenskaya line was launched, with the intermediate station Lermontovsky Prospekt; in 2014, Spartak station was completed and opened after a 40-year preservation period; in 2015, the new terminal station Kotelniki was opened.

In 2014, the Butovskaya line was extended to Bittsevsky Park station.

In 2018, the first section of the Delovoy Tsentr – Petrovsky Park Grand Ring Line was opened. Subsequently, another station was opened. In 2020, the second section Lefortovo – Nizhegorodskaya was opened, which was subsequently also extended by 1 station. In 2021, the Khoroshevskaya – Mnevniki section with forked traffic was launched, and by the end of the year it was extended by another 10 stations, to Kakhovskaya station.

In 2019, the first section of the Nekrasovskaya line Kosino – Nekrasovka was opened. In 2020, the second section was opened – Nizhegorodskaya – Kosino. Three stations of the Great Circle Line were also temporarily used in traffic.

Interesting about the subway

The opening of the subway in Moscow marked the beginning of a new era in the development of the city. The subway became a monument of the era and ranked among the main attractions of the capital. In the early years, people went down to the subway to admire the architecture and the richness of decoration of the stations. The cost of construction and design of the subway facilities at that time accounted for a large part of the country’s budget. Nowadays the transport component plays an increasing role for passengers. The Moscow Metro carries out more than 50% of all urban transportation. It is easy to imagine what will happen if the subway closes for at least one day.

In addition to the most popular transport system in Moscow, the subway is also an object of civil defense. Since 1941, all stations began to adapt for mass shelter of citizens in case of enemy use of mass destruction weapons. The ventilation shafts were equipped with filters, sanitary facilities were built, seal boxes were installed at the entrances to the stations to prevent explosions, and flooding was prevented in the tunnels. Diesel power stations were installed in service buildings to independently maintain lighting and ventilation. The temperature in the subway was maintained naturally.

During the war the subway served as a bomb shelter, here thousands of Muscovites hid from the air raids. Traffic was stopped at 18 hours, people were placed on stations and on the tracks, which were covered with wooden planking. At Belorusskaya and Chistye Prudy stations there were command posts of the General Staff and air defense. After the war the stations were designed with defense significance in mind. In addition to ground stations and stations of the Filovskaya line there are no gates only on a few stations: Aeroport, Sokol, Partizanskaya, Pervomaiskaya, Shchelkovskaya, Kropotkinskaya, Krasnoselskaya, Sokolniki and Pechatniki. In fact, the Moscow Metro is the largest bomb shelter in the world.

READ
The Tower of Pisa, why it falls and where it is located

However, contrary to popular belief, the subway is not an autonomous system. In the absence of power supply, in addition to stopping traffic, technical equipment will stop functioning. In just a few days, the level of groundwater in the underground structures will exceed the critical mark. 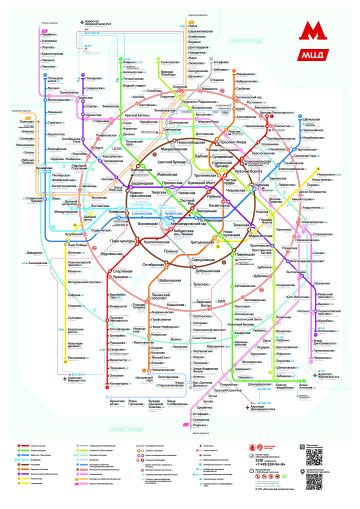 The Moscow Metro is a system of subway lines in Moscow.

The first subway in Russia and the USSR according to the date of its opening. The fifth by annual passenger traffic subway in the world and the first in Europe.

One of the most beautiful subways in the world. Many stations are richly decorated in the style of socialist realism, made of valuable stones and materials. 44 stations are cultural heritage sites.

In documentation abbreviated names of lines and working subdivisions are often used.