An interesting solution of the bridge architects came up with, it is not built over the water like many others, but splits the river in two, by the name Moses Bridge one can guess that the idea was taken from the bible story “Exodus”, when prophet Moses made the waters of the Red Sea part.

In Halsteren, Netherlands during the reconstruction of the 17th century Fort De Roovere (Fort De Roovere), which is part of the western waterline of Brabant in the defensive line of 1628, when some towns and villages were connected and fortified with sand and stone ramparts built a bridge that is below the water level.

The architects of the architectural bureau RO&AD (whose name comes from the names of both partners Ro Koster and Ad Kila) intended the bridge not to stand out and spoil the historical landscape, so when designing this bridge, they found an interesting idea how to make it almost invisible. The idea came from the Bible, from the story called Exodus, where Moses made the waters of the Red Sea part before the Jews in captivity and saved their lives, so they decided to name the bridge after the prophet – Moses Bridge.

“Moses Bridge” for its durability was built from a special, modified wood – Accoya®, acetylated in combination with innovative woodworking techniques and Red Angelim (Dinizia excelsa), thanks to such innovations the durability of the bridge in water is about 50 years. To ensure that the bridge does not flood during rainy season, additional embankments have been constructed on both sides of the moat to drain the excess water. Thus the water level in the moat remains constant.

The project was very unusual and interesting, people who walk across this amazing bridge, have an exciting feeling as if they pass through the parted water. And if you look at it from a distance, you can only see their heads sticking out over the water. Thanks to this unique idea, the Moses Bridge won the Dutch architects’ association the title ‘Best Building of 2011’. 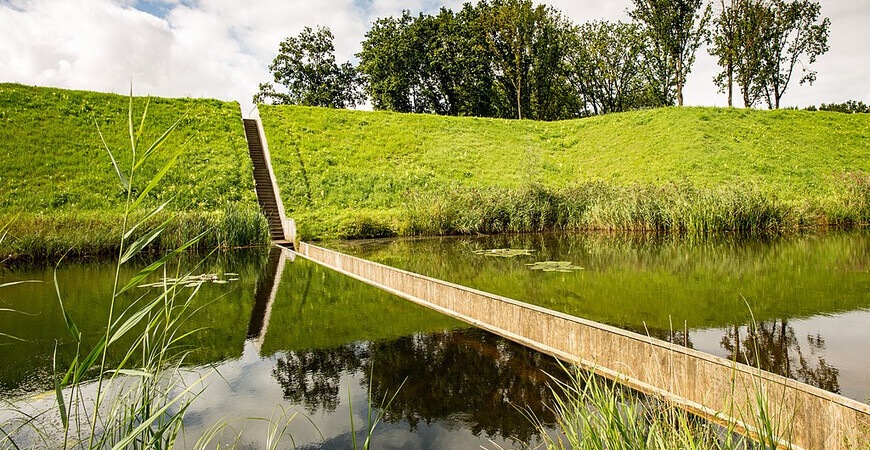 The Moses Bridge in the Netherlands does not really look like an ordinary bridge. It looks more like a tunnel without a roof or a boat that leads people not over or under the water, but right through it.

Every tourist should take a look at this part of the West Brabant waterway, which was recently restored. An obligatory part of such a tour is to walk across the unique trench bridge over the water without getting your feet wet. There is a special walking route to get acquainted with the bridge and its surroundings.

The sand fort of 1627 was made accessible to pedestrians thanks to this design. It follows the contours of the fort and is therefore barely visible. The bridge is made of preserved wood and is flooded in winter to prevent skaters from falling on it. The structure lies like a trench in a canal and thus follows the contours of the landscape. Because the land and water approach the edge of the bridge, visitors cannot see the bridge from a distance. Only when they get closer does the fortress become accessible to them through the narrow trench. Visitors enter the fortress as Moses walks across the water.

This trench bridge is a modern work of art that has won important awards in architecture and construction.

What if the surroundings were so beautiful that the best bridge in these parts could be invisible – that’s the question architects wondered before they came up with the trench bridge. Instead of a conventional water crossing, they invented a bridge that divides the water like Moses did the Red Sea.

The once active seventeenth-century defense line consisted of forts and cities with a flood zone to the north that was used as ditches, deep enough to deter foot marauders, but too shallow to let boats through. The line fell into disrepair in the nineteenth century, but not long ago a rebuilding program was launched that led to the creation of this peculiar “invisible” bridge.

Fort de Rover is the largest fort on this historic line of defense, and special attention has been paid here to turning the area into a recreational area for bicyclists and pedestrians. Not wanting to disrupt the appearance of the moat by adding a conventional bridge here, but badly in need of a bridge for access, regardless of the desire for historical accuracy, the Moses Bridge was a wonderful solution here.

The underwater bridge provides access to the Fort de Rover Fortress, part of the historic West Brabant waterway. The design was developed by the architectural firm Ro&Ad. The bridge is made of acetylated wood tongue and groove on either side of the waterway. The top of the Moses Bridge barrier is directly above the water, providing an unusual perspective from inside the bridge.

Inside the bridge is a hardwood planking and wooden staircase that provides easy access. The invisible bridge divides the water, conjuring up biblical images and maintaining the feeling of an ancient moat. The bridge, made entirely of waterproof wood, lies like a trench and disappears into the landscape, but when viewed from above or from either end, the bridge divides the waters, recalling the prophet after whom it is named.

In case a tourist lacks the faith to go down to the water and walk under it, the RO&AD architects who designed the bridge assure that flooding won’t be a problem here. Water heights are controlled by regulated dams on both sides of the ditch, ensuring that when the water rises and reaches the dams in front of the bridge, a pump is activated in case the dams overflow. The inconspicuous entrance to the fort allows you to enjoy the area without disturbing the presence of the moat and gives the strong impression that the waters parted just for you.

Fort de Rover Fortress near Bergen-op-Soma is one of the largest waterline forts in West Brabant. It was completely renovated in 2010. The fort is entered from two sides, the eastern side of which is famous for its “trench across the water” – Moses Bridge.

READ
Cave of the Winds in Tenerife. Attractions in Canary Islands.

In fact, Fort de Rover has not yet been completed; it is constantly being reconstructed. The fortress was not always an oasis of green nature. In 1628, the General States of Zealand and Holland decided that they had had enough – the Spaniards had already robbed and taken the fortified town of Stenbergen several times. And so they came dangerously close to the fortified town of Bergen op Zoom. Then the Dutch flooded the area and built forts there to stop the advance. Thus was created the waterline of West Brabant. Part of this was Fort de Rover on a high sandy ridge near Halsteren. The fortress stopped not only the Spanish, but also later also the French and Belgians.

To walk across the bridge and the fortress grounds, it is best to wear sturdy shoes suitable for earthen ramparts and dry ditches. Long pants are also needed, as there are many branches and nettles.

How to get to Moses Bridge

Moses Bridge in the Netherlands can be found in Fort de Rover, near the village of Halsteren, in the West Brabant region. Since this place is a little away from the busy highways, to get here, it is best to rent a car or use the services of professional guides in organized tourist groups.

You can also get to the nearest village by intercity buses 110, 310 and 810. Get off at the Halsteren, Molenplein stop.

You can also use cab services from Bergen-op-Som: Revo Taxi, Autosloperij, Taxi Schouten, 46000 Taxi and others.