Most national symbols in the world are man-made: the Statue of Liberty, the Eiffel Tower, the Kremlin, the Great Wall of China. In Japan, however, it is a natural phenomenon, although thanks to its almost complete symmetry, the snow-covered cone of Mount Fuji, even in summer, is so harmoniously composed that it seems more the work of an infinitely patient landscape designer rather than the result of volcanic activity. The majestic lonely peak rises to the heavens to a height of 3,776 meters. In short, it is simply beautiful. Here, more than in any temple garden or ancient castle grounds, it becomes clear why the Japanese prefer the blurred lines between nature and art.

It is believed that the name of the volcano comes from a word from the Ainu language meaning “fire.” Fujiyama volcano last erupted in 1707, and nowadays only occasional clouds of steam burst through its crust, like the measured breathing of a sleeping giant. Its sleep seems solid, fortunately for the hundreds of thousands of people who climb to the summit each year. For some, the ascent is a sacred act, as the mountain is revered as the abode of the ancient Japanese gods. For others, it is an act of strengthening self-discipline and a way of physical cleansing. For others, the ascent is not motivated by any religious impulse, and they come here on vacation to say they have been here, although they leave, to their surprise, with a strong sense of spiritual uplift. No tourist booklet can make Fujiyama a banal tourist attraction, and even the world’s most jaded travelers will not be indifferent to what comes before their eyes.

Most begin the climb at Lake Kawaguchi, in the resort area north of the mountain after about a two-hour train ride from Tokyo. The official climbing season runs from July 1 to August 27, but the mountain shelters at all ten stations on the various climbing routes are open from April to mid-November. Climbing the mountain “out of season” (especially in wet weather) is not recommended, but people do it anytime.

From Kawaguchi, you’ll take a local bus to Go-Gome (“Fifth Station”) on the north slope, where you can start the five-hour climb to the summit. You can also get here directly from Tokyo by bus from Shinjuku Bus Station; travel time is about 2.5 hours. If you’re coming from Kyoto or Osaka, a train or bus will take you to the Fujino-miya trail on the south slope.

True pilgrims begin the climb around midnight, reaching the summit by sunrise. The trail is well-marked, so there is no risk of getting lost. In addition, the night ascent allows you to avoid spending the night in one of the dormitory shelters (the conditions are, in truth, awful) . You can stop to rest at the seventh or eighth station. Bring warm clothes, comfortable shoes, headgear, and gloves. You can only buy snacks from vending machines at the top, so it’s worth stocking up on provisions and, most importantly, a thermos of coffee or tea.

In one respect, Fujiyama is like any other mountain – it is much easier to descend than to ascend. More adventurous climbers can make their way back down the volcanic sand-strewn descent to Shin-Go-Gome (the “New Fifth Station”). You simply sit on top of your backpack or a piece of cardboard and glide down. From Shin-Go-Gome, the bus will take you to the town of Gotemba, where you can transfer to other transportation.

Don’t limit your visit to these places to just Mt. Fujiyama’s five lakes, which arc around the foot of the mountain from the north, offer great fishing, boating, and hiking. The largest is Yamanaka-ko. Kawaguchi-ko is the most popular, probably because of the sightseeing boats that ply the northern shore, from which you can admire the perfect mirror reflection of Mount Fuji in the water in calm, clear weather. Sai-ko has the best trout fishing, and Shoji-ko is the smallest, most beautiful, and relatively undeveloped by man. Motosu-ko is the clearest and deepest.

READ
Jug Valley in Laos - a pottery workshop of giants

Between Sai-ko and Shoji-ko stretches the dense and mysterious Jukai (“Sea of Trees”) forest, notable for being easier to enter than to leave. The volcanic rock makes a magnetic compass completely useless. Many people wander here, some deliberately: the eerie Jukai is invariably popular with suicides, and local authorities scour the forest every year for bodies that would otherwise never be found. South of Motosu-ko, Shiraito Falls, 26 meters high, sparkling with foamy water, is a much more pleasant place for a picnic. 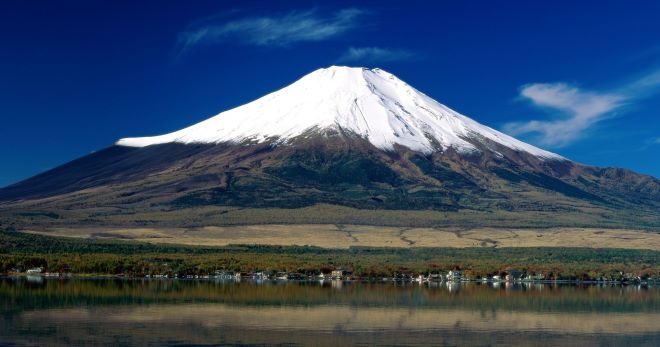 Fujiyama is a symbol of Japan. The highest mountain in the country symbolizes the embodiment of the connection between ancient traditions and modern principles of life. Fujiyama has perfect symmetry, which is why the Japanese consider it a standard of beauty. Artists and poets come here to get inspiration and tourists come here to admire the beauty of the legendary mountain.

A brief description of Mount Fujiyama in Japan

Mount Fujiyama in Japan is 3,776 meters high. The summit is often hidden in the clouds, so those who were able to see Fuji in full contemplate the incredible beauty. The outline of the crater has a resemblance to a lotus flower. The petals are protruding large ridges, the locals nicknamed them Yaksudo-Fuyo. The mountain is about 10,000 years old, which defines it as a stratovolcano. 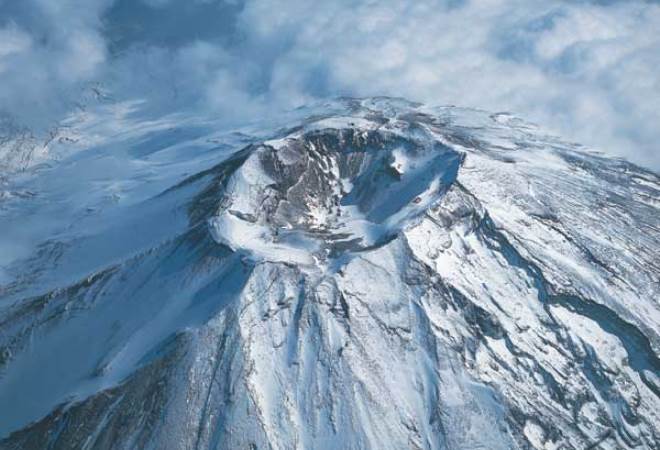 Many people wonder: is Fujiyama an active or an extinct volcano? To date, it does not pose a seismic threat and is classified as slightly active, i.e. dormant. Despite this, the mountain serves as an object of tourism and religious pilgrimage, which is visited by hundreds of thousands of people every year. But at the same time every resident of Tokyo knows the fact that after the last eruption of Mount Fuji, in 1707, the city was covered with a fifteen-centimeter layer of ash. Therefore, the volcano is under the scrutiny of scientists.

READ
Jal Mahal - a palace on the water. India

How does “Fujiyama” translate?

Surprisingly, the mystery of the name of the world-famous mountain has not yet been fully solved. According to modern Japanese characters “Fujiyama” means “abundance” and “wealth. But it is unlikely that such an interpretation took place 10,000 years ago. A chronicle dating from the tenth century indicates that the mountain’s name means “immortality,” which many scholars believe is closer to the truth.

The island with Fujiyama, Honshu, is the largest island in the Japanese archipelago, so there are always many visitors from other countries. And the volcano itself is known as a tourist attraction far beyond its homeland. In addition, the mountain is very often visited by Buddhists and Shinto, as on the western slope is the Great Fault, around which there are many religious buildings. There is a wide trail that runs from the foot of the mountain, which tens of thousands of pilgrims pass through every year.

July and August are the most convenient and safest periods for climbing Mount Fuji, because at other times the mountain is covered with snow, and mass tourism is not available. Throughout the tourist season, there are emergency services on Fuji, as well as open mountain huts called yamagoyas. In them you can rest on comfortable sleeping shelves, have a snack, and buy food and drinks. 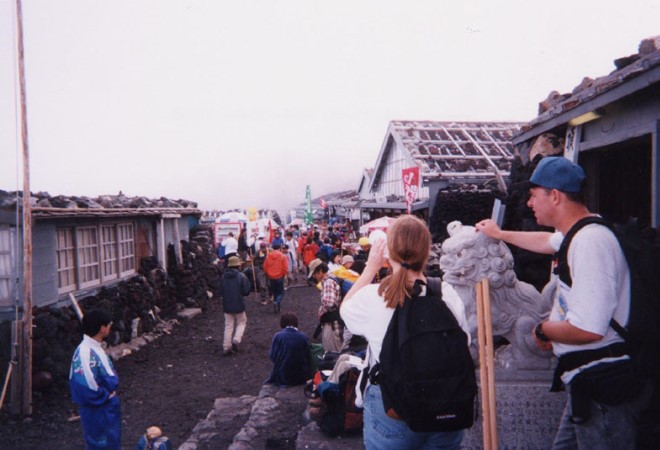 The ascent of Mount Fujiema can take one of four main routes: Kawaguchiko, Subashiri, Gotemba, and Fujinomiya. These routes are of medium difficulty because they start at the fifth level of the mountain. There are also four trails that start at the foot of the mountain, Murayama, Yoshida, Suyama, and Shojiko. They last longer than the previous ones and are designed for more advanced hikers.

Climbing a volcano doesn’t have to be a long climb. There is a toll road on the northern slope of the mountain. Buses run along it. They bring tourists to a large parking lot, where there are many restaurants and cafes, as well as pits. From there you can climb to the top of Mount Fuji, which can take from three to eight hours, depending on the route taken. 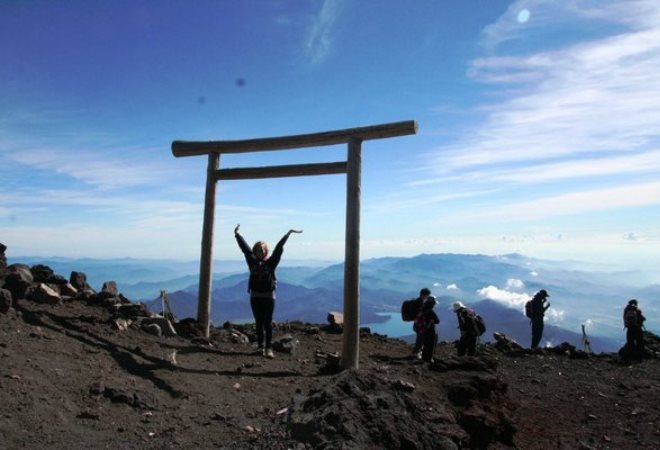 Paragliding from the summit of Mount Fuji is not for everyone. First, the weather conditions are not always conducive to a safe flight. Often athletes and tourists are brought back down when they have already put on their suits and gone through the instructions. This happens because of the sharp gusts of wind, which may appear suddenly. Secondly, in order to fly over the volcano, you have to wake up at night and arrive at the site in the early morning. But the spectacle that can be seen during the flight is worth all the trouble. Flying over the forest at the foot of Mount Fuji, you can appreciate the beauty not only of the mountain itself, but also of its surroundings, the Fuji Hakone-Izu National Park. And all of this – from a bird’s eye view. 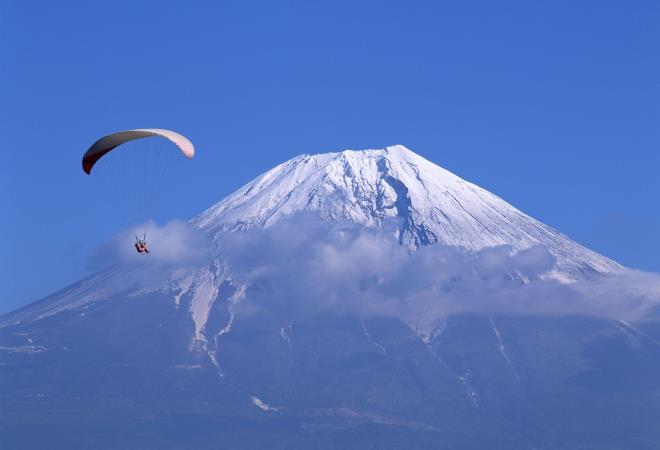 Why is Mount Fujiyama a sacred mountain?

The fact that Japan’s Mount Fuji is considered a holy mountain is no secret, but what makes it holy is not clear to every European. The volcano has a canonically perfect shape, while often covered by clouds for a third. From time immemorial it has been given a sacred meaning. The effect is intensified by the trail at an altitude of 2,500 m, which skirts the mountain. Pilgrims believe that it points the way to the other world.

According to the ancient legend of Fujiyama, the crater is believed to be the forge of the fire god Ainu. Of course, our distant ancestors might not have known about the volcano, and they had no other explanation for the lava boiling and subsequent eruption. In any case, for thousands of years, people of Buddhism and Shintoism consider Mount Fujiema to be the main shrine. 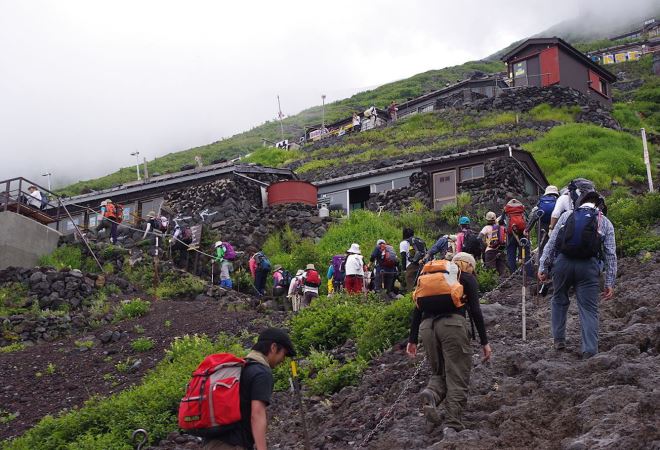 And, of course, such an important landmark could not fail to be covered with facts of interest to every inquisitive person:

READ
The Statue of Unity in India is the tallest monument in the world. Description

Where is Mount Fujiyama?

The mountain is only 90 km from Tokyo, on the island of Honshu, and is part of the Fuji Hakone-Yizu National Park. The geographic coordinates of Mount Fujiema on the map are 35°21′45″N. 138°43′50″ E. The cities of Yokohama and Miyamae-Ku, near where the volcano is located, can serve as reference points. Mount Fujiyama is the most popular volcano in Japan, and its photos adorn all travel guides, so it is easy enough to find it. 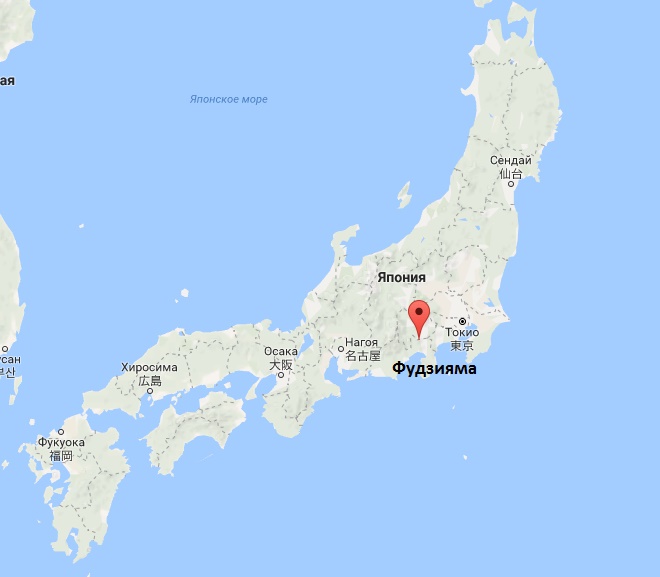 How to get from Tokyo to Fujiyama?

One way to get to the landmark is via the expressway, which will take 1.5-2 hours by car.

You can also use the express buses that leave from Shinjuki bus station at hourly intervals. The first departs at 6:40 a.m. and the last at 7:30 p.m. The ticket price is $23.50. The trip will take about 2.5 hours.

Don’t forget the travel agencies that offer tours to Fujiima from Tokyo. They can pick you up at your hotel or pick you up at another convenient location, the tour costs from $42.