Ancient Monastery and Mount Montserrat in Spain is a unique sight located in the outskirts of Barcelona.

The main relic of the temple is the Black Madonna – a statue with a baby, affectionately called La Morenata by the locals.

If you find yourself in Catalonia, do not miss the chance to see this mysterious place. The statue is very beautiful and is said to grant wishes.

Before you go, it is worth getting some useful information about the complex.

Almost all tourists who want to visit the cathedral, wonder what the name of Montserrat means and why they go there.

In translation, the name of the mountain range and the Benedictine monastery of the same name means “cut mountains”.

The complex got such a name because of the large number of jagged rocks. Over thousands of years of rain and wind have turned the mountains into bizarre sculptures, and now they look as if they were cut.

There is a more beautiful version as well. Some Catalans and visiting pilgrims believe that angels worked on the unusual shape of the mountain.

They were bored with the dull appearance, so the angels sawed the massif and decorated it with stone images.

The stone figures were named: the Finger of God, the Face of the Holy Virgin.

The construction of the Montserrat monastery, according to Wikipedia, began in the ninth century. At that time there were several hermitages, and by 1025 a temple was built. It is still active today.

Now in the monastery lives about a hundred monks. Their main duty is to receive pilgrims who constantly come to this religious center.

In their free time, the monks produce natural products (curd, honey, wine), as well as engage in creative work. 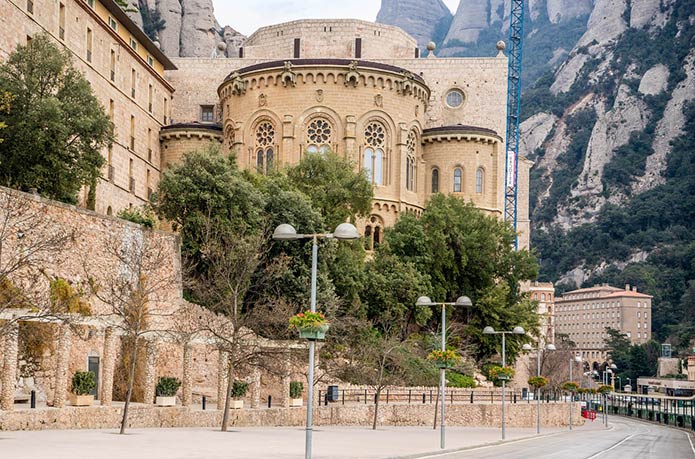 Where is the complex

Catholic shrine Monasterio de Montserrat is located at the address, which is so designated: Catalonia, Monistrol de Montserrat. The distance from the capital of Catalonia is 50 kilometers.

Instructions on how to get there can be found here. Before visiting, visit the official website of the cathedral: https://www.montserratvisita.com/.

The Black Madonna – the symbol of Montserrat

The Black Madonna of Montserrat is considered the symbol of the monastery and its main value.

According to legend, the statue was carved by St. Luke himself, and later it was transported to Spain.

During the Saracen attack on Europe, the relic was lost. In 890, the statue of Our Lady was accidentally found by shepherds in a cave, to which they were led by a mysterious light and chanting.

Later, the chapel of Santa Cova was built at this location.

Externally, the statue, carved from black poplar, is small – 95 cm.

There are three versions of why the Madonna is black: 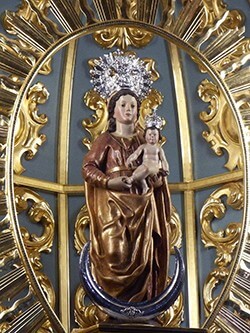 The sculpture of Our Lady has become a place of pilgrimage for women dreaming of a child. There is a legend that the patroness fulfills this wish.

But every year thousands of visitors come to the monastery with other requests (for example, for good luck in business).

Judging by the fact that the special room is littered with gifts from grateful people, dreams do come true. It is no coincidence that many Spanish girls, especially in Catalonia, are named Montserrat.

Making a wish is very simple:

True, there are always many pilgrims, and you will have to stand in line.

More about the monastery

During its long history, the monastery has been repeatedly destroyed during the wars. Especially strongly the building was damaged under Napoleon.

Nowadays, almost everything is rebuilt. It has everything that monks need for life and receiving visitors: a park, a cafe, a store, a museum.

There is a hotel for religious tourists.

The Basilica, or monastery church, is called the heart of Montserrat.

It keeps the image of the Black Virgin, holds services and performances of students of the singing school.

The size of the basilica is quite modest, but it is of great spiritual importance.

The first stone was laid in 1560. Since then it has been restored several times and is considered one of the best examples of modernism. 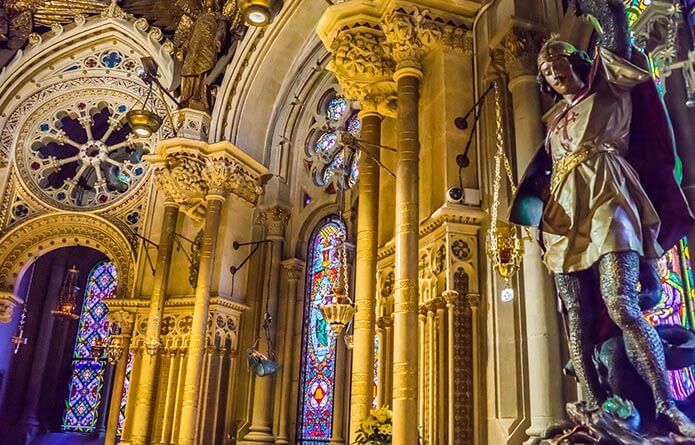 The monastery building, built in the Gothic style, is the result of the work of various architects and artists.

The best masters, including Antoni Gaudi himself, worked on the exterior.

The abbey altar is especially beautiful.

The throne, on which the statue of the Madonna stands, is made of silver, and the money for the construction was collected by the parishioners.

The altar itself is made of rock and decorated with silver and enamel. 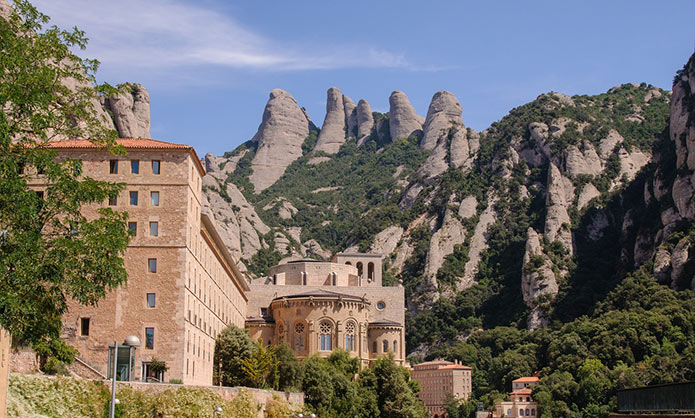 Boys choir at the monastery

The singing of the local choir leaves no one indifferent. The boys who study at the local school of music sing very beautifully to the sounds of the organ.

Especially strong impression is made by the “Ave Maria”, known to every believer.

The age of the students is from 9 to 14 years old, after which the child’s voice begins to break down.

Of particular interest to visitors is the monastery museum. Here are collected jewelry, archaeological finds and other valuable relics from around the world.

In the museum you can admire the paintings of El Greco and Caravaggio, see ancient sculptures, manuscripts, icons of Our Lady.

Admission to the museum for children under 14 years old is free, others pay 12 euros. 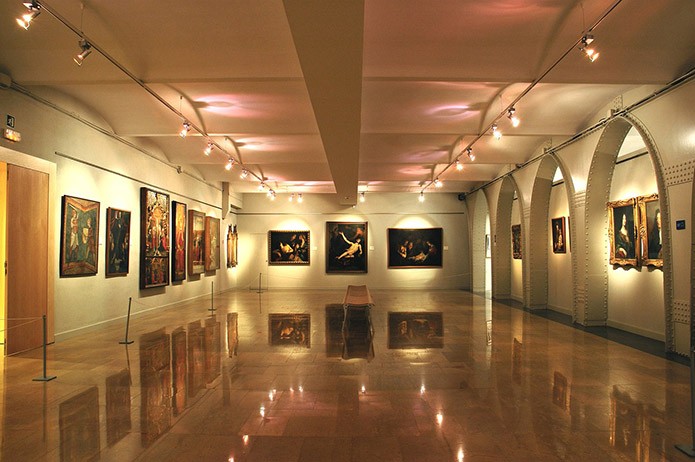 Important monuments on the territory of the monastery

Every visitor to the monastery should take the “Way of the Drops”.

The first part of the road is called the “Alley of Masters”. On this section you will see monuments to prominent cultural figures.

Further along the path, see the creations dedicated to the Mother of God.

Viewpoints at the entrance to the monastery

If you don’t have time to go for long walks you can climb to one of the viewing platforms at the monastery’s entrance. The views of the surrounding nature are simply breathtaking.

There are beautiful panoramas from the observation deck near the restaurant and from the one next to the cable car.

At least two varieties of Masses are held daily in the monastery. There is no charge for attendance.

In addition, those who wish to do so may go to confession.

The current schedule of services can be found on the official website of the basilica. 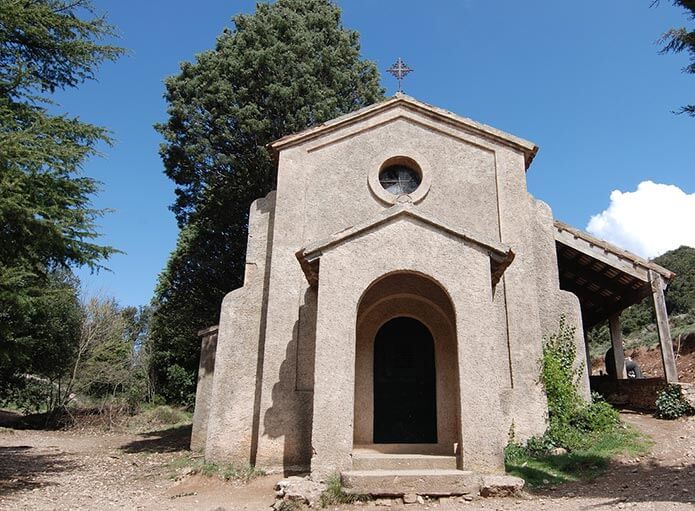 Go to the famous cathedral can be free of charge. Pay only have to road to the monastery and back.

The costs will be approximately 50-60 euros, including a hearty lunch at a local cafe.

Working schedule of the shrine

The spiritual center is open for visits all year round.

The rest of the cathedral is closed an hour earlier.

In order to enjoy the tour, read the rules for visiting the unique monastery:

At the end of your trip, stop by the local store. There you can buy icons, nice souvenirs and natural products produced by the monks. 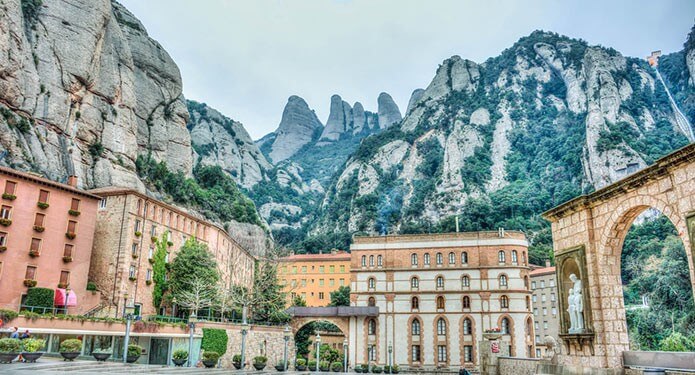 If you find yourself in the beautiful Catalan capital, take a chance to appreciate the beauty and unique atmosphere of the Montserrat complex.

It is impossible to remain indifferent to this holy place full of mysteries and legends.

It is calm and good, in addition, it is worth listening to the advice of the elder Simeon of Athos:

“Put your thoughts in order, and you will see the world with different eyes”.

In Spain about 50 kilometers from Barcelona in the direction of the Pyrenees Mountains rises a bizarre mountain, resembling from afar the shape of a Gothic temple. This is the famous mountain of Montserrat. 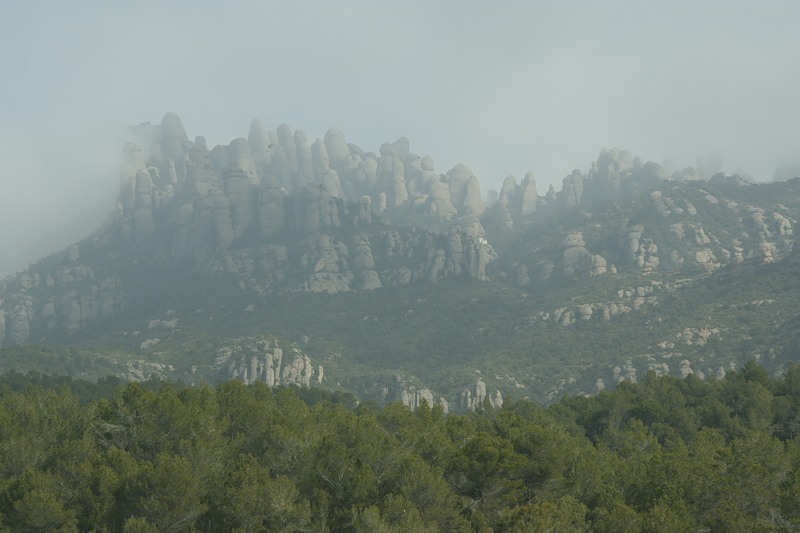 In Catalan, Montserrat means “jagged (dissected) mountain”. Its height reaches 1236 meters above sea level, width – 5 km, length – 10 km. A real island in the middle of the plain. It was formed along with the massif of the Pyrenees, but as a result of various geological forces broke away from it.

An unusual mountain from ancient times attracted the attention of people. And so it is not surprising that in the IX century here, at an altitude of 700 meters above sea level there were four hermitages, which later became the foundation of the monastery. In 1025, here began to build a Romanesque Benedictine monastery, and a century later there was the current ensemble in the Gothic style.

The buildings blend very organically into the surrounding landscape of towering limestone cliffs. The medieval architects who built their Romanesque and Gothic cathedrals were inspired by Mount Monserrat.

READ
Kailais Mountain of the Gods, in detail all the facts

At the end of the sixteenth century, a large cathedral was consecrated in the monastery. Alas, Napoleon’s troops did not spare it or the rest of the buildings – in 1811, they burned and destroyed almost everything. There was a real “goat hunt” – soldiers shot monks and hermits. But the place was so important that already in 1844 began the reconstruction of the monastery, which lasted almost 100 years.

The Monastery of Monserrat has been a symbol of Catalonia since ancient times. During the reign of General Franco, services were held there in the Catalan language, which was forbidden at the time. 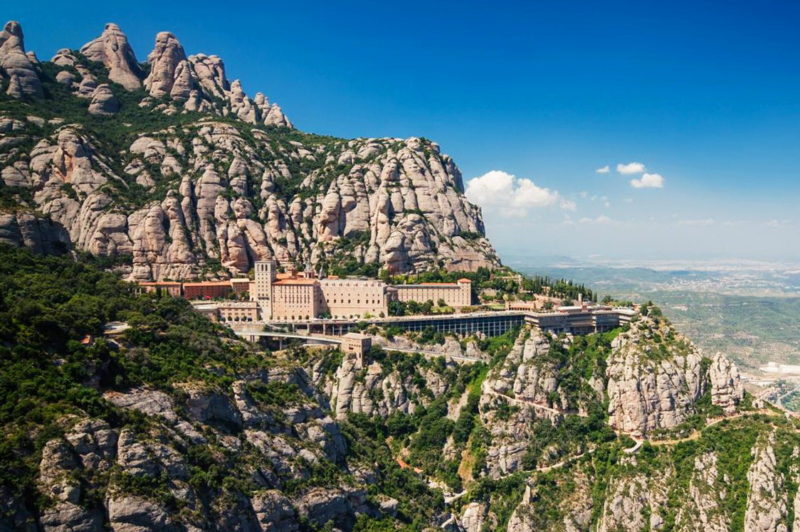 The main relic of the monastery is the statue of the Black Madonna with Child (La Moreneta), as she is affectionately called by the Catalans. According to tradition it was created by Luke the Evangelist, and in 50 AD St. Peter brought it to these places and hid it in the cave of Santa Cova. It was found during the Reconquista. However, according to modern research, it was not made until the twelfth century.

The statue is very small, only 95 cm, made of black poplar and dressed in gold. It is placed in a special glass display case behind the altar of the basilica. During the Napoleonic invasion, she was hidden in a secret place, thanks to which she was saved from destruction.

The Smurgeon is the patron saint of Catalonia. So it is no coincidence that many girls in these parts bear the name of Monserrat, for example, the famous singer Monserrat Caballé. 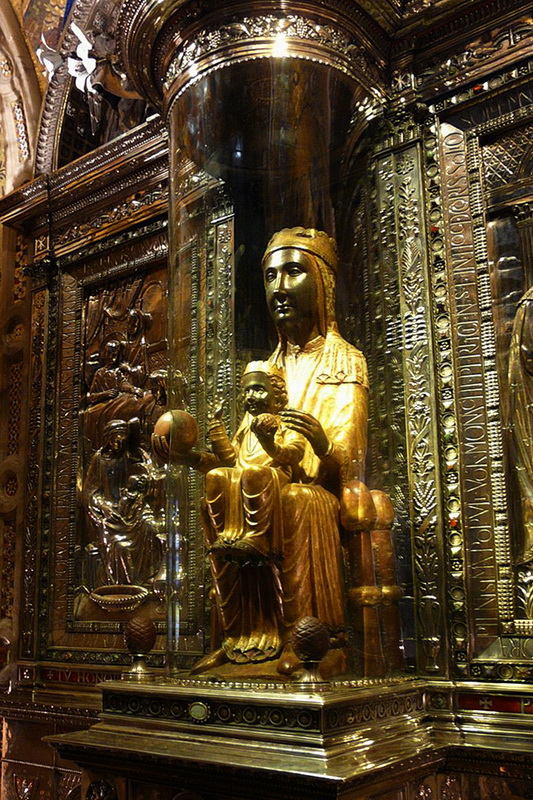 Black Madonna at the Montserrat Convent

The Montserrat Monastery is also famous for its boys’ choir. At the monastery there is a music school – Escolania de Montserrat, founded in the XIII century and which is one of the oldest in Europe. The choir sings the hymn to Our Lady Virolai de Montserrat at one o’clock every day, the hymn Salve Regina at 7:10 pm and all the solemn masses.

How to get to the Montserrat Monastery

READ
Trail of Death in China, description and cost

The Montserrat Exprés tourist train also leaves from the station in Plaça Espanya in Barcelona.

Funiculars in the Montserrat Monastery

Another way to get to the Montserrat Monastery and learn about all its attractions is to book a tour there.

© “Roads of the Middle Way” website, 2009-2022. Copying and reprinting any materials and photos from anashina.com in electronic publications and printed editions is prohibited.

Online services that help me travel:

. Want to know more about China? I write about it in my telegram channel “The Middle Way.”

The Khibiny Mountains are not high, but they are harsh, and there are no sights on the mountains themselves, except for the natural ones, the Sayan Mountains are more interesting in this sense, only in summer it is very hot.