The railroad on Mount Pilatus in Switzerland leads from the town of Alpnachstad on Lake Lucerne to the top of the mountain, which is 2073 meters above sea level. The elevation drops as much as 1,635 meters for a total of 4,618 meters of track. This makes it the steepest railroad in the world. Its average gradient is 38%, with a maximum of 48%. That’s steeper than the steepest street in the world. 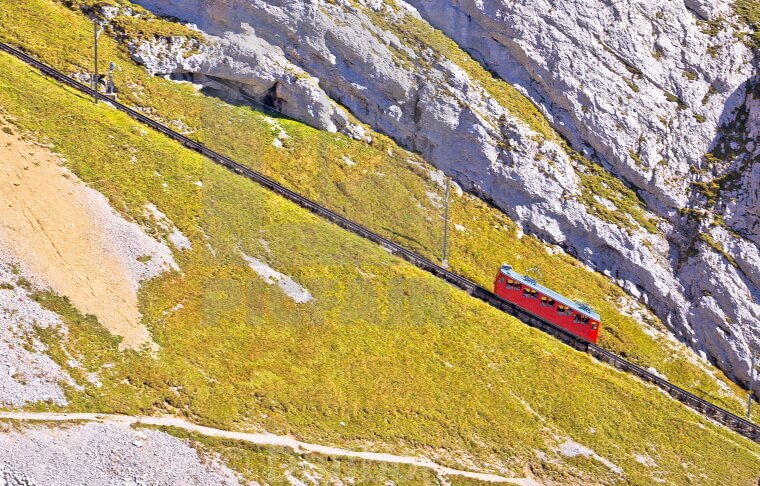 You will find the steepest railroad practically in the middle of Switzerland, 10 kilometers south of the city of Lucerne. The end station is located on top of Mount Pilatus on the border of the Nidwalden and Obwalden regions. 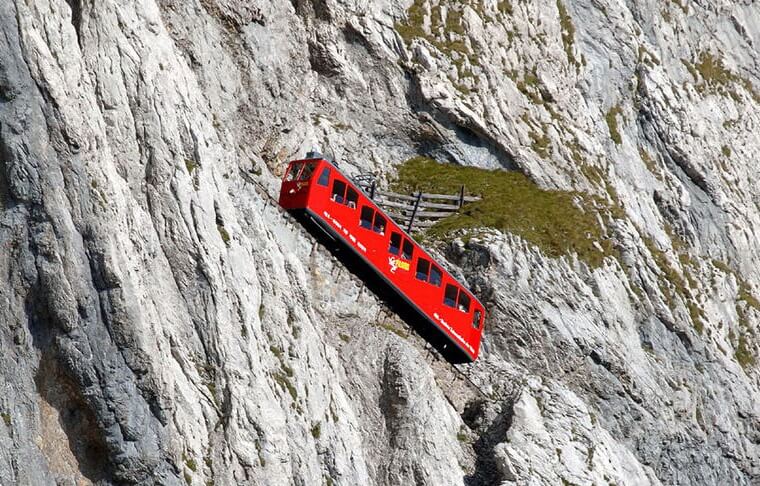 The idea of building the line was proposed in 1873. It was proposed that the gauge would be 1435 mm and the maximum gradient 25%.

As you understand, an ordinary railroad does not have steep ascents and descents. And in order to overcome significant differences in elevation, they create interesting engineering structures. For example, the Tehachapi Loop in California or the Brusio Viaduct in Switzerland.

As a result, Eduard Loecher, an engineer with extensive practical experience, developed a unique system with a maximum gradient of 48%. This made it possible to halve the length of the trail. 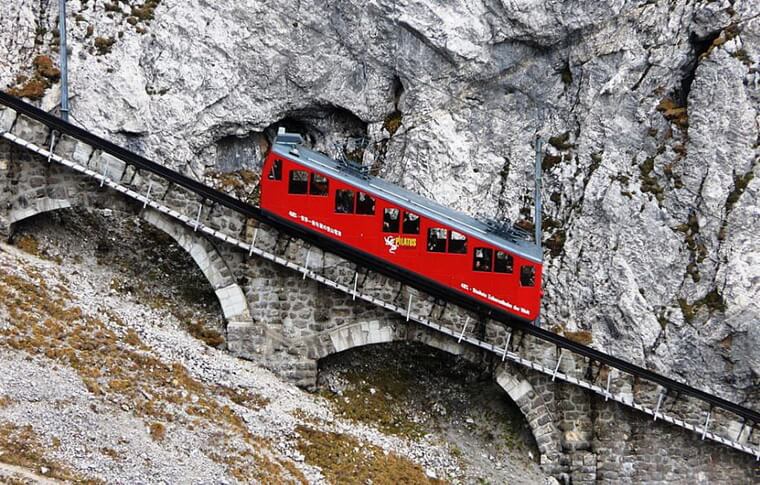 The climbing mechanism on Mount Pilatus

Standard systems at the time could not cope with such gradients. That is, the vertical gear wheel, which is pressed against the post from above, could fail to mesh with the post at high gradients. Instead, Locher placed a horizontal double rack between the two rails so that the rack’s teeth face each side. In this way, two gear wheels on vertical shafts beneath the railcar body moved it along the railroad track.

READ
The Verzasca River is the most transparent river in the world. Switzerland

This design eliminated the possibility of lifting the cogwheels out of the rack and also prevented the wagon from tipping, even in a strong headwind in the area. The system was also capable of guiding the car without the use of flanges on the wheels. Indeed, the first wagons on the Pilatus Railroad did not have flanges on the running wheels. They were added later so that the wagons could move along the rails without running wheels during maintenance.

Interesting fact – An ingenious design with two horizontally rotating cogwheels was exhibited at the 1889 World’s Fair in Paris.

A little history and basic features

The first original steam cars took on board up to 32 passengers. The average speed was 3 to 4 kilometers per hour. It took 70-80 minutes to reach the top. 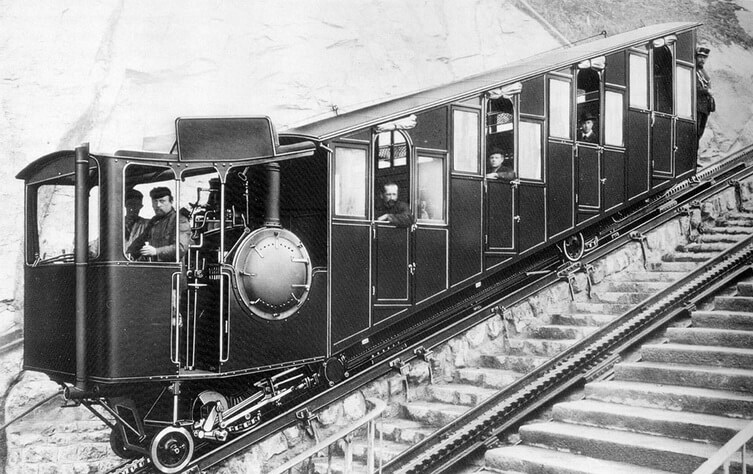 The first steam-powered cars on the Pilatus railroad

Modern cars can carry up to 40 passengers and speed up to 9-12 km/h on the way up, but only 9 km/h on the way down. Accordingly, the way to the top takes about half an hour.

An interesting fact is that the Pilatus railroad line still uses the original rack and pinion rails, which are over 100 years old. The secret is that after the rails were found to be worn, they were simply turned the other way around. Thus, a different, unworn surface is now involved. Experts say that this will be enough for the next century. 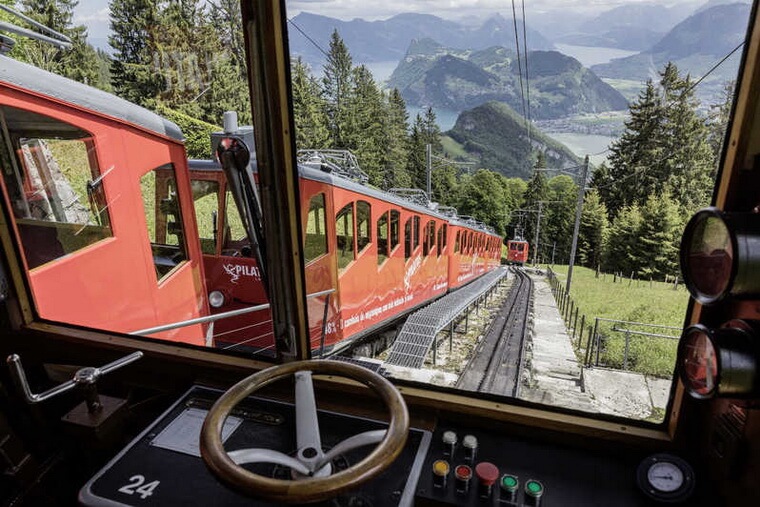 View of the railroad from the driver’s cab

An interesting fact – the Government did not provide subsidies for the construction of the line. So Locher founded his own company, Locher Systems, to build it. Thus, this railroad was built entirely with private capital.

Interesting fact – in 2001 the American Society of Mechanical Engineers named the Pilates railroad a historic monument of mechanical engineering. 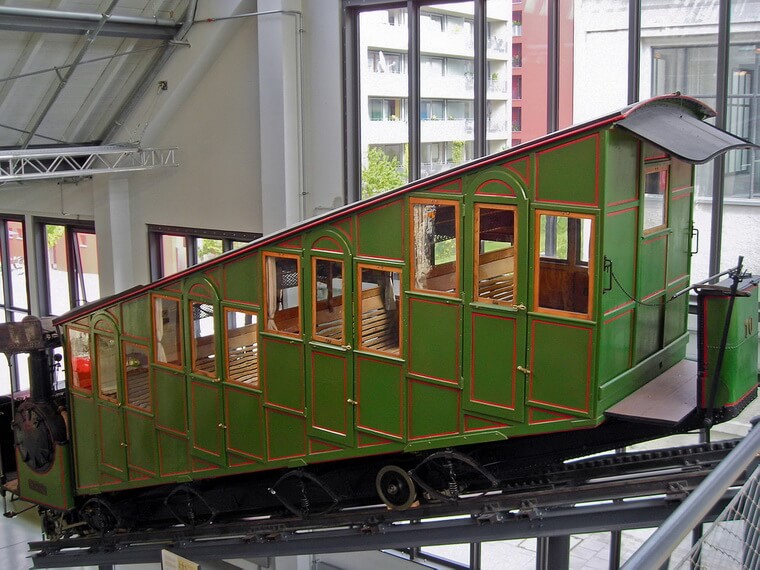 One of the first Pilatus railroad cars in the museum

Mount Pilatus and its railroad in tourism

The railroad and the Pilatus itself are very interesting sights in Switzerland. Naturally, tourists are quite normal here.

Wagons run from May to November, when the railroad is not buried in snow. Trains leave every 45 minutes during the day. In winter, access to Mount Pilatus is possible only by cable car. 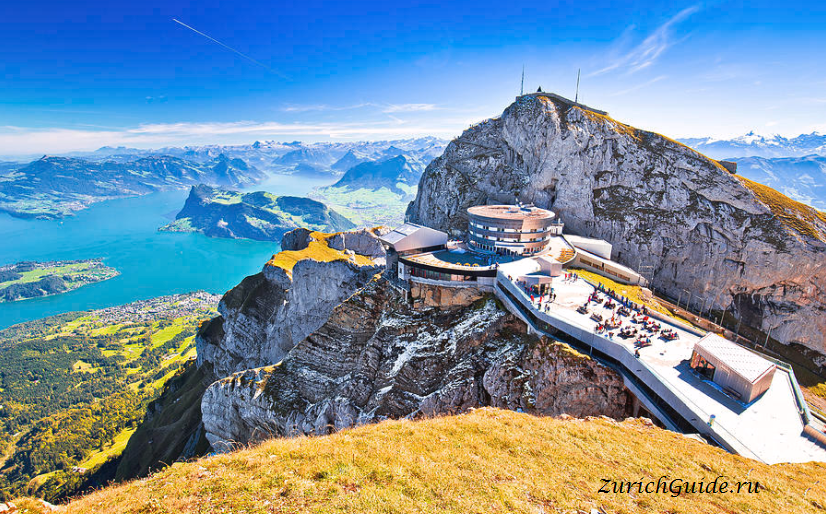 Mount Pilatus (Pilatus) is a mountain range overlooking Lucerne in central Switzerland. It consists of several peaks, the highest of which (2128.5 m) is called Tomlishorn. Jurisdiction over the massif is divided between the cantons of Obwalden (OW), Nidwalden (NW) and Lucerne (LU). The main peaks are right on the border between Obwalden and Nidwalden.

It is the most accessible and one of the most visited alpine mountains in Switzerland. Among those who have reached its summit are Konrad Hessner, Theodore Roosevelt, Arthur Schopenhauer (1804), Queen Victoria and Julia Ward Howe (1867).

The mountain has a fortified radar (part of the Swiss FLORAKO system) and weather stations at the top of Oberhaupt, closed to the public and used year-round. 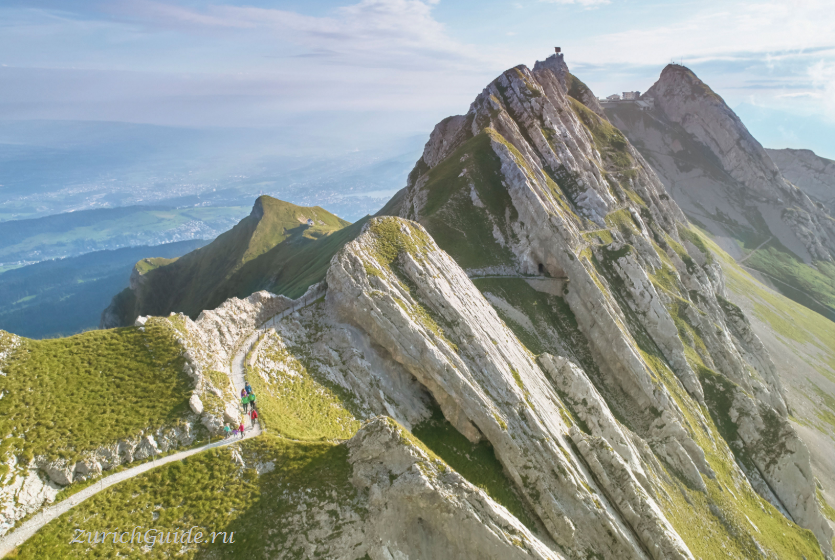 How to get to Mount Pilatus:

You can reach the top of the mountain by train (Pilatus Railway), the steepest cog railroad in the world, departing from Alpnachstad ( Alpnachstad ), operating from May to November (depending on snow conditions) or all year round with aerial panorama gondolas and aerial cable cars from Kriens.

View of the mountain from the old town of Lucerne: 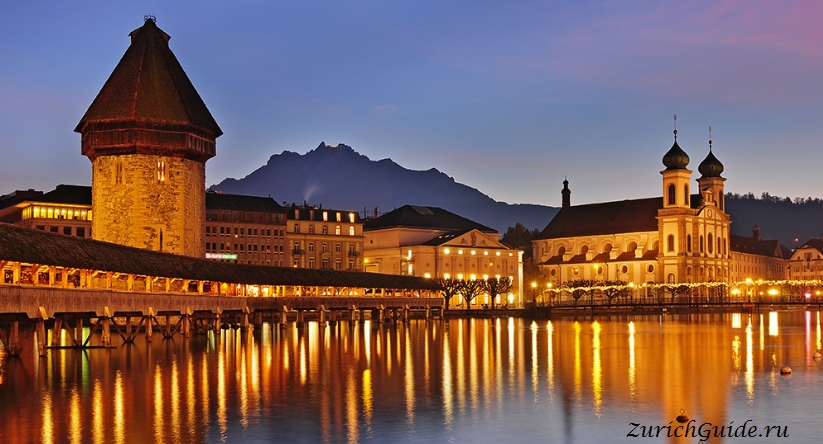 Tomlishorn is located about 1.3 km southeast of the upper cable car and train station. The other two peaks, closer to the stations, are called Esel (“Donkey”, 2118 m), which lies just east of the train station, and the one on the west side is called Oberhaupt (“Main Leader”, 2.105 m).

You can get to the cable car in Kriensa by bus number 1, which leaves from the main train station in Lucerne. Then it is a 10-minute walk to the cable car, following the signs Pilatus. 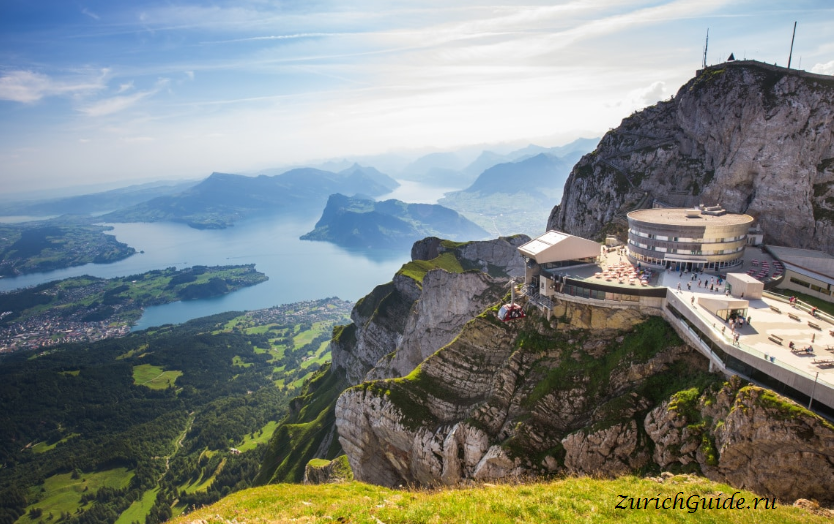 During the summer, the ” Golden Circle Tour,” a popular itinerary for tourists, includes a boat ride from Lucerne across Lake Lucerne to Alpnahstad, a cogged rail climb, a descent by cable car and panoramic gondola, and a bus ride back to Lucerne.

From other cities to Mt Pilatus

The legends of Mount Pilatus:

There are several different local legends about the origin of the name. One claims that the mountain was so named because Pontius Pilate was buried there. However, a similar legend is told of Monte Vettore in Italy. Another is that the mountain resembles the belly of a large man, Pilate, lying on his back, and is thus named after him. The name may also be derived from ” pileatus ” which means “cloudy”.

Medieval legend had dragons with healing powers living on the mountain. A chronicle from 1619 says: “As I contemplated the serene sky at night, I saw a very bright dragon with flapping wings, coming from a cave in the great rock on the mountain to another cave, known as Flue, on the opposite side of the lake. This legend served as the inspiration for Steven Reinecke’s famous concert Pilatus: Mountain of Dragons .