Among the hills and vineyards of the province of Tuscany is one of the most stunning tourist attractions not only in Italy but also in the world – a cascade of white limestone pools overflowing with warm turquoise water. It is called the Cascate del Mulino (Cascate del Mulino). 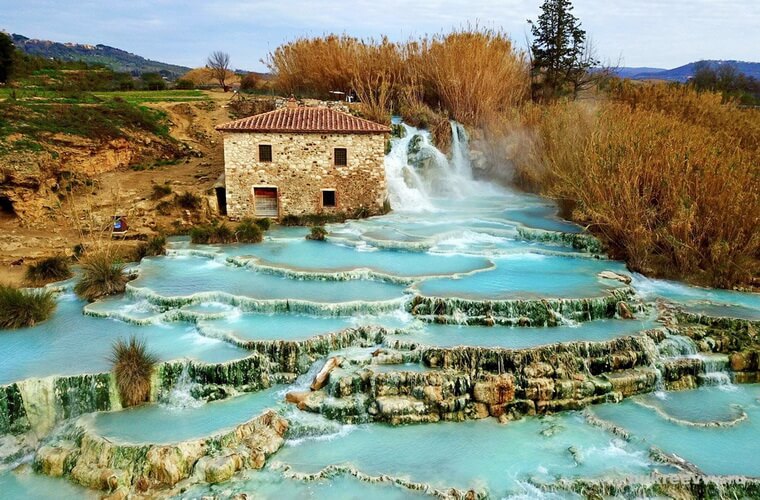 This surreal wonder of nature means “Mill Falls” in Italian. And indeed the cascades are located on the territory of the old mill, just a few kilometers from the village of Saturnia. Hence the second name – Termes Saturnia. By the way, there is also a third name – the Waterfalls of Gorello.

An impressive and unforgettable natural landscape created from the sulfurous waters originating from the thousand-year-old Gorello thermal spring in the limestone rock.

Over the centuries, the water has literally built travertine cascades with natural pools. 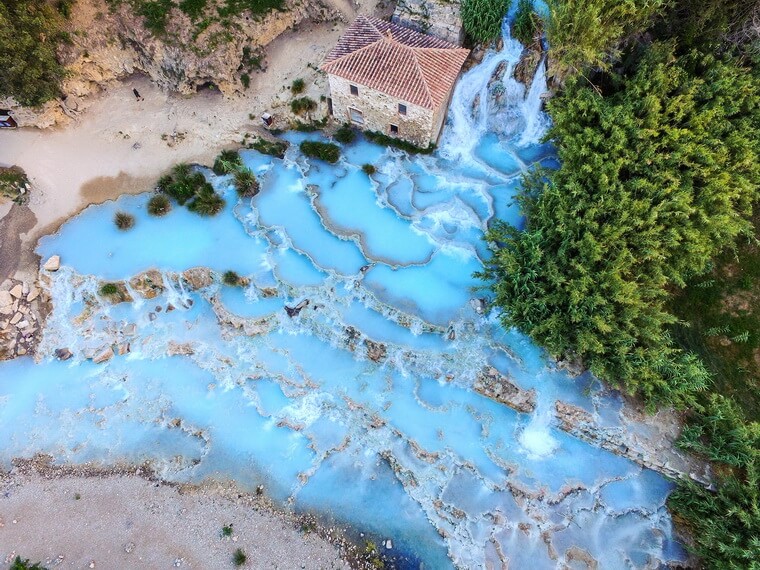 Note, similar formations can be found in other countries. The striking examples are Pamukkale in Turkey and Huanglong Terraces in China.

The water begins its long underground journey on the slopes of Mount Amiata, several tens of kilometers away from the cascades. It takes 40 years for the water to travel underground, slowly seeping through microcracks in the calcareous rocks before appearing in the thermal pools.

Turquoise water in the cascading white pools has a constant temperature of +37 degrees Celsius. On cool mornings, steam emanates from them, creating the illusion of a dreamy dream. 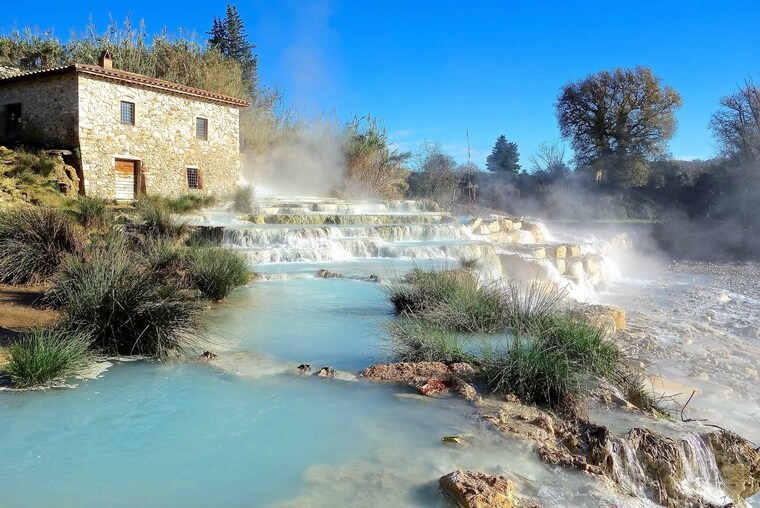 Steam rises over the cascades of Mulino in the cool morning

The Cascate del Mulino waterfalls are open (if I may say so) all year round. However, it is recommended to visit them in late fall or even winter to avoid large crowds. Recall, throughout the year the water temperature is constant and comfortable. 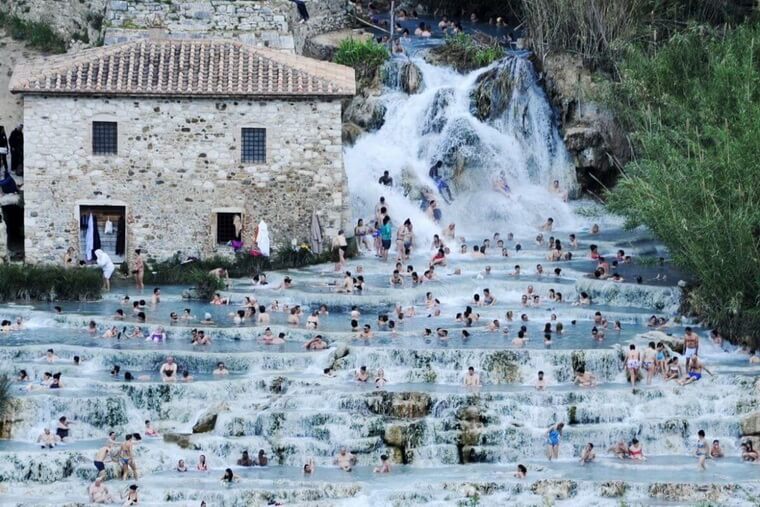 As you can see, there are quite a lot of tourists

The legend of Cascate del Mulino

According to legend, this place was formed by lightning strikes that did not hit the target after the god Jupiter threw them at his father, the god Saturn.

Looking at the beauty of this place, one really wants to believe that it is the work of the ancient gods.

Saturnia’s resorts have an ancient history.

The Etruscans were the first to build a bath and a temple here to thank the gods for this gift. The Romans then took over the area and built the first public baths in history, Orinia, in the center of Saturnia.

Since Roman times, people have often come here to be cured of various ailments by the therapeutic water from the underground springs. They are rich in sulfur, calcium, and other useful minerals in the area.

By now the Mulino Falls have become a popular tourist destination. And people come here not only to relax in the warm natural pools, but be sure to hold photo shoots for social networks against the backdrop of amazing waterfalls.

Despite the fact that the attraction is known under 3 names, you should still separate its individual sections.

For example, the pools of Cascate del Mulino are not deep. You will not be able to swim in them, but you will be able to lie down in peace. 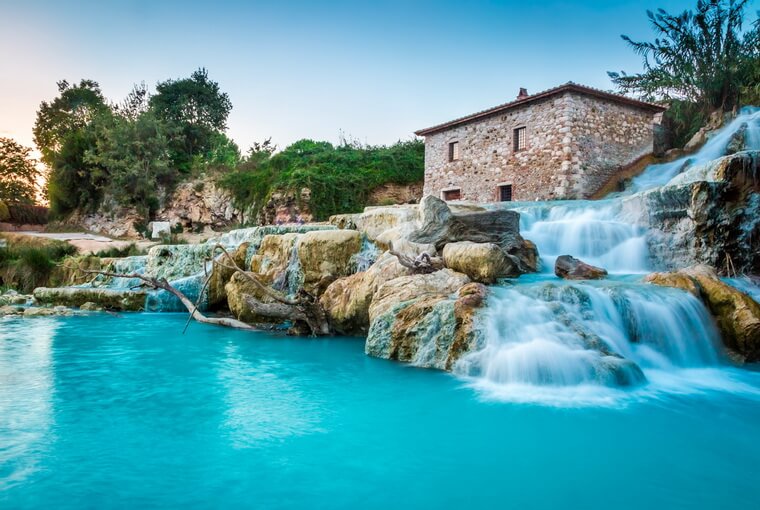 It is noteworthy that you can swim in these pools not only for free, but around the clock, and even all year round. And that is why there are almost always a lot of tourists here. There are almost always tourists here.

But the Baths of Saturnia is a large spa (Terme di Saturnia). You have to pay to enter here. The pools here are deeper. In addition, you will be offered a lot of spa procedures for any choice and purse. It is located 1 kilometer north of Mulino Cascades. 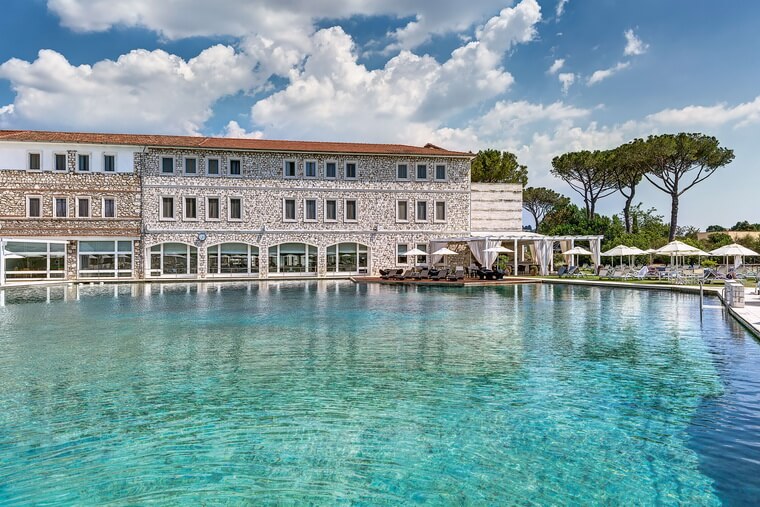 Everything is on the top level here, but of course not for free. In the province of Grosseto, in the heart of Tuscan Maremma, there is a special place that is impossible not to visit when you are in this beautiful region, because it is also completely free. The Saturnia open thermal springs are a paradise where you can relax and enjoy the beneficial waters at any time of the year.

What is Saturnia Thermae Terme di Saturnia is one of the most famous and loved by Italians natural thermal springs in Tuscany. The spring that feeds the picturesque waterfalls flowing into the pool has a constant temperature of 37.5 degrees and is famous for its healing and relaxing properties. The thermae are open to the public 24 hours a day all year round.

The center of the baths are the so-called Waterfalls of the Mill or Cascate del Mulino, which flow into a huge stepped pool created by nature. The baths are surrounded by beautiful views of the typical Tuscan landscape, with its green hills and valleys under a bright blue sky.

The waters are rich in useful minerals, especially sulfur, which explains their pungent “egg” smell. In addition to sulfur the water contains sulfates, magnesium and calcium, as well as hydrogen sulfide and carbon dioxide. It is important that the water flow rate is almost 800 liters per second, which guarantees a complete water change in the thermal pool every 4 hours.

Why are the Thermae called Saturnia The name Saturnia is related to the legend that tells of the creation of the place. The god Saturn, who was fed up with the incessant wars breaking out among humans, decided to threaten them by sending his strong signal.

He threw a lightning bolt from the sky to the earth, forming a huge crater that gave birth to a hot sulfuric water spring that still attracts thousands of tourists today.

As a consequence, people immediately quieted their belligerence and began to lead a life of peace and wealth, recognizing Saturn as their lord.

Cascate del Mulino and the benefits of its water The waterfalls can be approached from the highest part of it or from anywhere along its course toward the valley. Of course, that the more you descend, the weaker the water pressure and lower the temperature. Once you enter one of the baths, you can go upstream to the waterfall, but you have to go up very carefully, because the path is slippery and quite dangerous.

In addition to their relaxing effect, the thermal waters of Saturnia have a beneficial effect on health: If you are in Italy and are planning to visit the Saturnia thermal springs during your trip through Tuscany, there are a couple of things to look out for in order to make your visit to the thermae as enjoyable as possible:

⇒ Saturnia’s outdoor thermal springs have no public changing rooms, so it’s best to arrive already in your bathing suit; many people take large towels with them to make it easier to change after bathing.

⇒ The parking lot is free, but very small and it is not very easy to find a free spot there. The second one is located in a field nearby, it is easy to find from the signs and can be reached on foot.

⇒ The whole area is hardly guarded in any way, which means there are no lifeguards. But there is a bar with sandwiches and snacks, and of course a toilet.

⇒ The area around the waterfalls and the pool is surrounded by gravel and sandy soil, it is not easy to walk barefoot, so it is a good idea to have beach shoes, flip-flops, or at least sneakers that you don’t mind getting wet.

⇒ Be sure to bring a towel and sunscreen: the sulfurous water will not protect you from sunstroke: there is little shade, and in the summer months it is very easy to get burnt at the end of the day.

⇒ Take drinks and food with you; the on-site bar has sandwiches and chips, but these are definitely not the best of Tuscany’s delicious cuisine.

⇒ While these natural wonders may seem like the secret spots of Maremma, they really aren’t that secret. Many people know them and visit them to take a relaxing bath in the lap of nature, so it’s often quite crowded. You can definitely find a spot in the huge pool and enjoy its warm underground waters, but you are unlikely to find privacy here: if you are looking for peace and quiet you should follow the course of the river, which flows from the main pools.

How to get to Saturnia Thermae Undoubtedly, a car is the most convenient way to get to Saturnia thermal springs, especially if you want to take the opportunity to visit the picturesque places of Tuscany. You can use your GPS, Google maps or other navigation system to get to the waterfalls, just enter Cascate del Mulino , Via della Follonata, 58014 Saturnia, Manciano Grosseto.

From the north of Italy, take the A1 freeway, exit Firenze Certosa, take the freeway towards Siena – Grosseto – Scansano – Montemerano sino a Manciano and Saturnia.

To get to Saturnia from Southern Italy, take the A12, get off at Civitavecchia, continue on S.S. Aurelia until you reach Montalto di Castro, then take the Vulcio and drive to Manciano and Saturnia.

As in many other places in southern Tuscany, public transportation is available, but not very convenient – in any case, nothing is impossible.

The nearest train station is Albinia but not all trains stop there, so don’t forget to check timetables and stops on www.trenitalia.com. The next station is Orbetello. From here you can take a bus (Rama) to Manciano. From Manciano take the bus line 17/P every 30 minutes to Saturnia.

Visiting this unique place you are sure to add to your collection of unforgettable experiences in Italy.