The Munich Residenz, a palace complex in the Bavarian capital, is one of the most important museums in Europe. What is worth seeing in the Wittelsbach Residence?

The Wittelsbach Residence in Munich is a museum complex located in the center of Munich. For seven centuries the feudal dynasty of the Wittelsbachs was dukes and later kings of Bavaria. Each new ruler had the duty of enlarging and improving the palace. Its construction began in the early 14th century and today the possessions of the Bavarian feudal lords include the Royal Suite, the Old Residence, the Festive Hall and ten inner courtyards.

History of the Munich Residenz

At the end of the 14th century, the Gothic Neuveste Castle was built on the orders of the Wittelsbach dukes. It was intended to be a fortress and to protect Bavaria’s rulers against civil strife. Over time, Neuweste became a luxurious residence, and the palace garden, the Fountain Court, the National Theater and much more appeared next to it. In 1897 a number of courtyards and halls of the complex were opened to the common citizens. Each subsequent ruler brought something new to the arrangement of the palace and the surrounding areas. Today, thousands of people leave rave reviews about the residence of the Wittelsbachs, which has become one of the most picturesque architectural and artistic ensembles in the world.

There is a special tourist route to the Residence. It begins with an Indian-style grotto decorated with thousands of seashells. Then visitors get to the most ancient and luxurious part of the complex, the Antiquarium. This is the hall where balls and banquets were held. Its area exceeds 60m². Fans of sculpture will appreciate the collection of marble sculptures. Also in the Antiquarium is a collection of paintings and heraldry.

The treasure house with precious relics of the Wittelsbachs and symbols of royal power is a must-see. The collection of jewelry presented here is considered one of the richest in the world. Many tourists are especially attracted by the 120 and 380 objects in the travel and home wardrobes of Maria-Louise of Austria.

You can admire the splendor of life of the dukes and kings in the Royal Suite. They were built in the Italian style, modelled on the Palazzo Pitti in Florence. The walls of the rooms are decorated with scenes from Greek and German poetry, and all the furniture and decor of each room is in the same style, from beds and tables to candlesticks and mirrors.

The Wittelsbach Residenz is located in central Munich, near Marienplatz square. The best way to get here is by subway; the stations Marienplatz and Odeonsplatz are about 600 and 300 meters from the complex. Buses 100 and 153 are also very close by.

Opening hours of the Munich Residenz vary depending on the season:

The fountains in the gardens are open from mid-April to the end of October.

Entrance to the halls of the palace costs 7 EUR, separately you need to buy a ticket to visit the Treasury. Its price will also be 7 EUR. In addition, there are general tickets:

Visitors may use the audio guide for free, which includes a guided tour in Russian. 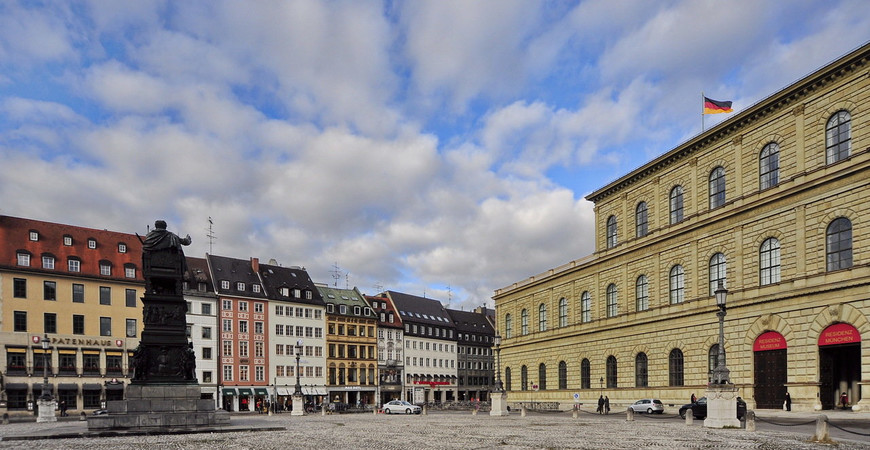 The Residence consists of 10 courtyards, 3 museum complexes – the Royal Rooms, the Old Residence and the Celebration Hall – and has over 130 rooms.

In addition, the complex includes the Treasury, the Residenz Theater and its own garden with fountains. The Munich Residenz is regarded as one of Europe’s most important collections of fine art and sculpture. Apart from the wealth of interior furnishings (especially in the Royal suite), the Munich Residence is a veritable collection of architectural history, since the buildings in the complex were built in a variety of architectural styles during different periods in history. Renaissance, baroque, rococo and classicist architecture is represented here.

It is said that to explore all the halls, palaces and corners of the park will take at least two weeks.

The history of the Munich Residenz dates back to 1358 with Neuveste Castle, the remains of which can still be seen in the apothecary garden of the Residenz. Bavarian princes used to hide here from the popular uprisings. The Bavarian royal dynasty of the Wittelsbachs never interrupted from 1240 to 1918, so everything that was once created in the Munich residence was created for the benefit of one family. With every new king, a new hall, palace or garden was added to the Munich residence. It was Wilhelm IV who created the first garden, Albrecht V who created the Festival Hall and the Kunstkammer, where curiosities were collected as was the custom at the time. When the exhibits became too numerous, the Antikvarium was built, which took up the entire first floor. The Antiquarium was the first museum this side of the Alps. Later, in the 17th century, Maximilian I. built the Wittelsbach Fountain with allegorical figures of the four main Bavarian rivers.

The Baroque period presented the residence with sumptuous rooms: the Rifle Room, the two anterooms, the Golden Audience Hall, the Great Study, the Bedroom Room, the Little Chapel and the Study of the Heart. A gallery, library, and garden also appeared. The king’s wife, Henrietta Adelaide of Savoy, designed them to embody the architecture of her native Italy.

READ
Het Loo Palace in the Netherlands, photo and description

Already in the 18th century one of the most important parts of the residence, the Old Rococo Theater, was built, intended only for the court. More than 1,000 trees imported from the lands of Lake Staffel were used in the construction.

In the middle of the nineteenth century, the residence was strikingly luxurious. The Royal Suite was built, with a winter garden of 300 square meters with exotic birds and plants. An artificial lake was built on the roof of the Celebration Hall, on which Louis I sailed in a boat. After his death, however, the Winter Garden and the lake were demolished. Slightly later electricity, central heating and elevators were installed in the palace.

In 1918, in Bavaria, the republic was proclaimed and the kings left the Munich residence, and in 1920 a museum was opened here.

During World War II, the residence was badly damaged. During the bombing it was destroyed almost to the ground. The reconstruction began after the war, and the last restoration was completed only in 2003. The palace has been well restored due to the fact that many of the valuables were removed after the first bombings.

The Munich Residenz is open to visitors throughout the year except January 1, December 24, 25 and 31 and Fat Tuesday (the Tuesday before Easter).

The treasury is open at the same time.

The parks of the palace complex can be visited every day, but the fountains work only from April to October from 10:00 to 14:00.

Visiting the park and fountains is free for all.

Please note that you can buy a ticket only at the museum ticket office, there is no online ticket purchase.

The Bavarian kings had a particular passion for collecting jewelry and gold, precious stones, enamel and crystals. Their vast collection is displayed in a special section of the Munich residence, the Treasury. Its history dates back to 1565, when Duke Albrecht V., in his will, decreed that a closed fund be established for the jewellery collection. His descendants greatly expanded the collection. Religious relics were also added to the collection. Often, however, they could also be classified as jewelry.

The collection was constantly changing its location in the palace because of its ever-increasing size. It acquired its present form in 1958. The treasury is on the first floor of the Royal Suite, occupying 10 rooms.

The collection of the Treasury in the Munich residence is unique and among the most valuable in the world. Of world significance are the Prayer Book of Emperor Charles (860), the life-giving cross of Henry II of Austria, the cross of Queen Gisela of Bavaria of Hungary (around 1000), the crown of Henry II (around 1270) and the Gothic crown of an English queen (around 1370). Visitors are most often attracted by the ruby ornament of Queen Teresa.

In the Treasury, as in the entire museum, very strict security regulations. It is forbidden to enter with backpacks.

The address of the Munich Residenzstraße 1, München.

The palace complex is located in the city center and can be reached by all means of transport.

The subway in Munich is called the U-bahn and has a branched structure and more than 100 stations. In fact, every district of the city has access to the subway. Therefore, if you do not live in the center of Munich, the subway will be the most convenient option for you to get to your Munich residence.

The closest stations to the palace complex are the Marienplatz or Odeonsplatz stations of the U3 and U6 lines. The journey from the station Odeonplatz takes only 2 minutes.

Munich has an extensive S-Bahn (city rail) network in addition to the subway. The train makes it easy to get from outlying districts of Munich or from the suburbs. The nearest train station is Marienplatz on lines S1 to S8. The journey from Marienplatz is about 10 minutes.

If you live near the Munich Residenz, it might be worth considering taking the streetcar to the museum. Munich’s streetcars run fairly fast and cover all central areas. You need to take routes 19 and 21. The Nationaltheater stop is located right in front of the Munich Residenz.

The Munich Residenz is in the heart of the city, so it’s easy to walk from any other attractions.

For example, the way from the Frauenkirche is only 10 minutes.

And from the Old Pinakothek – about 15 minutes. Therefore, the Munich Residenz can be included in your sightseeing plan for downtown Munich.

Given Munich’s extensive public transportation, a cab can only be advantageous when traveling in a group or when time is limited. Cabs can be caught on the street, summoned by phone, or taken at one of the parking lots located near transportation hubs. A fee of 1 euro will be charged in addition to the cost of the trip if you go downtown.