The Guimet Museum of Oriental Art was created by Emile Guimet, an industrialist from Lyon, at the end of the 19th century. Initially, Guimet planned to create a museum that would focus on Egyptian and ancient religions because he already had an extensive collection from his travels in Greece and Egypt. But in 1876, Emile Guimet set out on a voyage around the world, stopping in Japan, China and India. The collections brought back from that voyage were first exhibited in Lyon in 1879, and 10 years later Guimet moved the collections to Paris. Gradually the museum began to acquire an eastern specialization.

The room formerly occupied by the Ancient Religions section was occupied by the Korean collection, and later the iconographic rooms were vacated for the Tibetan collection of Jacques Bacot. The Egyptian section at the Museum of Oriental Art lasted longer than all the non-Asian sections. By the way, it was to play an important role in the life of the museum.

At the end of the 19th century, the Louvre created a department specializing in China and Japan, which later became an independent department. In 1945 a general reorganization of French museums took place, during which the extensive collection of the Department of China and Japan of the Louvre Museum was exchanged for the Egyptian collection of the Guimet Museum. This exchange made the Guimet Museum of Oriental Art one of the largest museums in the world containing such an extensive collection of Asian art. Today, the museum contains several thematic exhibitions representing the collections of oriental art.

Expositions at the museum

The exhibit representing the art of Afghanistan and Pakistan dates back to 1900, when more than a hundred pieces brought from Peshawar, Pakistan, by the Indo-Afghanistan expedition of Alfred Fouchet were exhibited in the Louvre. One of the most striking exhibits is the famous statue of a bodhisattva, a classic example of Gandahar art. All of these exhibits were later inherited by the Guimet Museum. 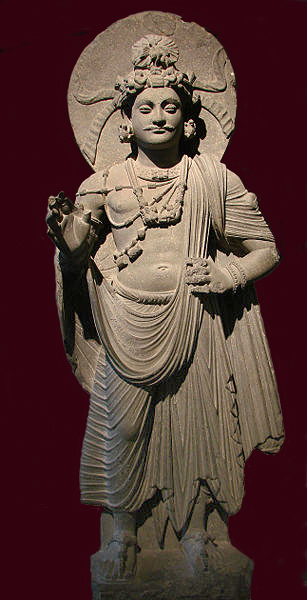 The Himalayan art collection began in 1879 by Emile Guimet himself, when he exhibited several objects from the everyday life of Tibetan llamas in Lyon. Today, the exhibition contains more than a thousand and a half pieces. In 1912, the Himalayan art department was considerably enriched by artifacts brought back from the East Tibetan expedition of Jacques Bako: paintings and bronzes from the 18th and 19th centuries. The Tibetan art of that epoch was strongly influenced by China, and the museum mostly had such strongly Chineseized artifacts in its exposition. But the museum’s recent acquisitions of Nepalese art have broadened the panorama of Himalayan art for visitors.

One of the most interesting exhibits is the Bhairava mask. Similar masks are laid at the foot of temples when the Bhairava and Indra celebrations are held in late September in Kathmandu. 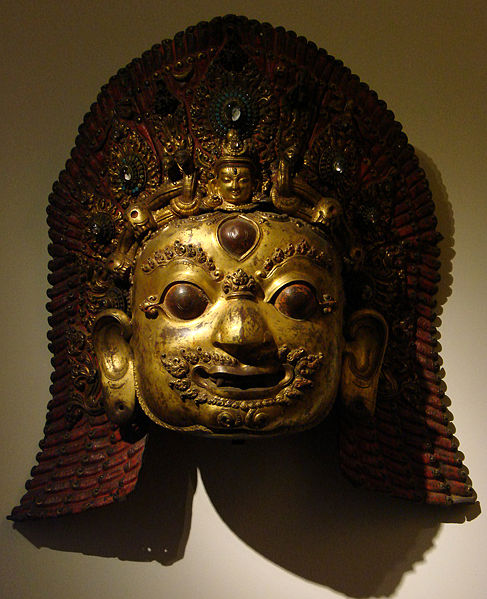 The mask is made in a manner that inherits the style of Indian sculpture tradition that spread throughout the Himalayas in its time, a direct testament to the close connection of the Kathmandu people’s culture with its Indian neighbors.

In the late 1920s, the Guimet Museum of Oriental Art established a Southeast Asian Art Department. The basis of the exhibition was the fusion of two collections of Khmer art: the Emile Guimet collection (brought back from Cambodia by the Etienne Aymonier expedition) and the collection of the Museum of Indochina, located in Paris on rue Trocadero. Until 1936, the collection was expanded by donations from the French School of the Far East, one such exhibit being the pediment of the temple at Banteay Srey. 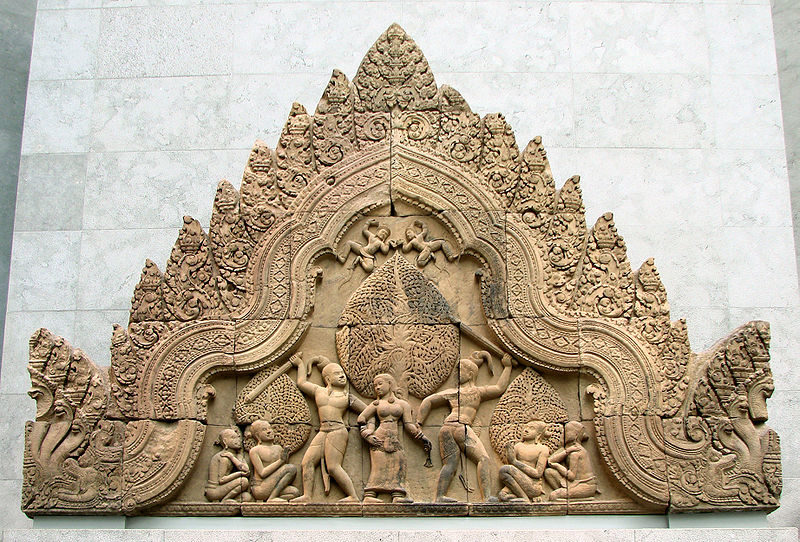 The pediment of the temple at Banteay Srey

With the rich Khmer collection, visitors can trace the entire history of Khmer art from its inception to the present day. In addition to the Khmer collection (the territory of Cambodia and the Indian part of Vietnam), the Southeast Asia department features works of art by artists from Thailand, Burma, Laos and Indonesia.

Works of art of Central Asia are also allocated in the museum as a separate exposition. Due to the dry climate of this region many unique manuscripts and paintings of Buddhist culture are wonderfully preserved. The exhibits in this collection are items from the excavations of French archaeologists of the Silk Road cities.

The Chinese collection of the Guimet Museum contains over twenty thousand objects, a vivid illustration of almost seven thousand years of Chinese art history. Here visitors can see jade and pottery from the Neolithic period, bronzes from the Shang and Zhou dynasties, statuettes, articles of harness, bronze mirrors and hairpins, coins and lacquered decorative caskets. 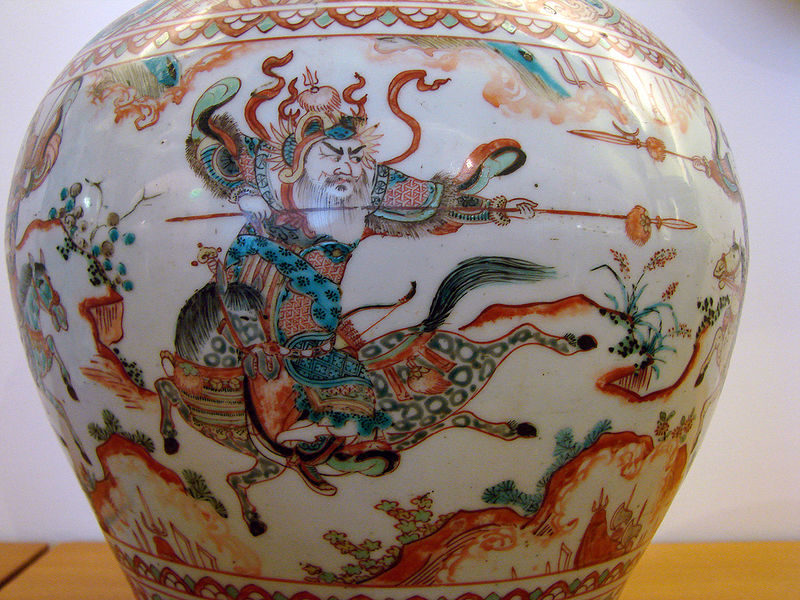 The Korean collection began with an expedition by Charles Varus in 1888. For many years Korea was a country closed to foreigners, and the items brought by the expedition allowed Europeans to view Korean art objects for the first time. Today the collection consists of thousands of objects, greatly enriched after World War II by a donation of the Silla gold collection formerly owned by Artur Sach.

The Musée Guimet is named after the famous 19th century French businessman Lyon Guimet, who came up with the idea of creating a museum with works of oriental art. Lyon was a collector and collected unique artifacts from different Eastern countries. His collection became the basis for the museum and included exhibits from China, Egypt and other Asian countries. To date, the museum is the only cultural institution in Paris, which gathered a lot of knowledge about the life of Oriental people. The foundation of the museum dates back to 1889. Under the direction of Lyon Guimet, the museum received its unique Asian specialization. At that time, the collection of ancient religions was actively developed, but after the creation of the Korean exhibition, it was relegated to a secondary status and eventually lost its significance. The iconographic departments suffered a similar fate, which in 1910 were converted to the Tibetan Room using the Jacques Bako collection. Of the non-Asian departments, only the Egyptian Room was preserved in the museum until the middle of the 19th century, as it was founded by the ancestor, Guimet himself. 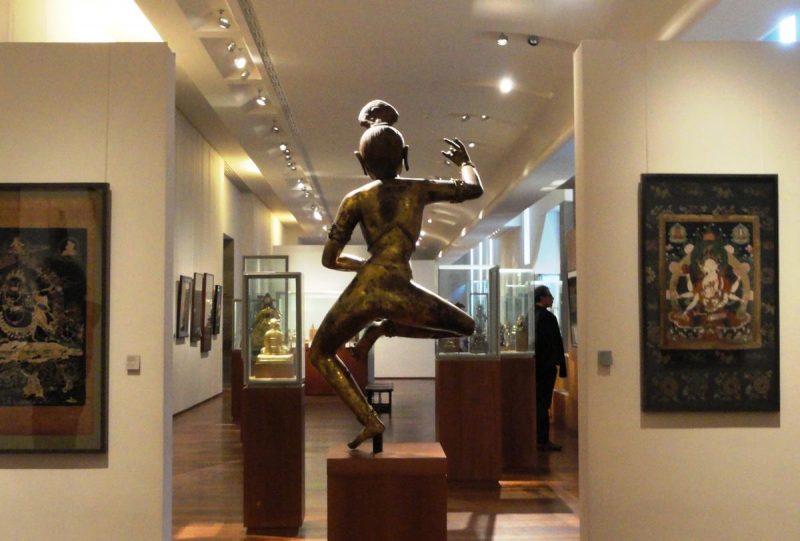 After the expeditions of the famous traveler Louis Delaporte to Siam and Cambodia in the 1880s, a new room appeared in the museum. It was based on the materials brought back from the expedition and in 1930 the hall was named the Indochinese Hall. Between 1920 and 1930 valuable items from Afghanistan were donated to the museum with the help of the French Archaeological Board. At the very end of the nineteenth century, the famous Louvre Museum in Paris, with the help of the art department, transferred to the Guimet Museum the most famous room – China and Japan. This exchange made the Guimet Museum the largest in the world for the possession of Asian art of several centuries. In return for this exchange, the Louvre was given the Gimet’s Egyptian collection.

The museum has a most unusual corner devoted to the creation of a real Japanese garden, featuring a large tea pavilion. This gift was given to the museum by admirers from Japan. In accordance with all the orders of tea ceremonies, a real Japanese corner was built.

At present, the museum has eight themed rooms, each representing a different country or region: 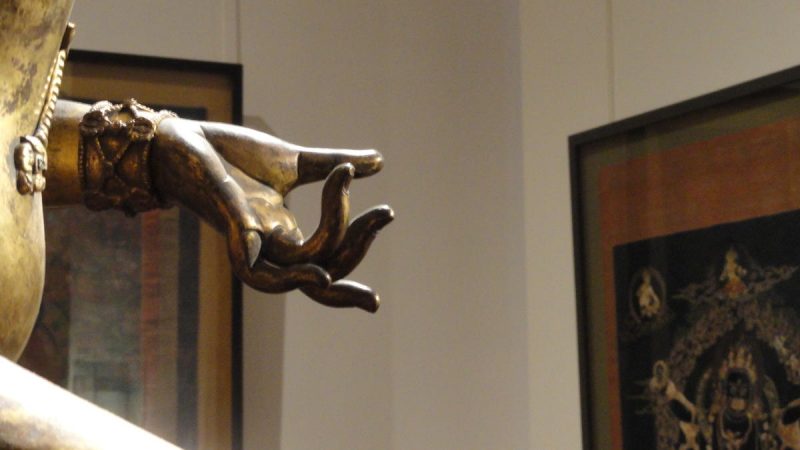 In addition to these halls, during its long history, several other exhibition compositions have been formed that are devoted to textile products of Eastern civilizations, library treasures, sound and photo archives. The museum holds five of the most interesting collections for tourists, which are collected from all corners of Asia.

1. A collection of Khmer sculptures that were previously outside of Cambodia. This collection is the most complete and authentic in the world. It provides a comprehensive overview of ancient Khmer art from the 6th to the 19th century. The collection consists of a large number of masterpieces of Khmer art and is arranged chronologically according to the major stylistic divisions of Khmer art. The sculptures are supplemented by more than 170 works in the form of miniatures with captions.

2. Ernest Grandidier’s collection of Chinese ceramics, which was assembled from 1833 to 1912. It is one of the richest collections extant in the West. It has a total of 6,000 exhibits, some of which are world-class jewels. Jugs, bowls, vases, dishes, jars and various sets of pots are presented in chronological order. 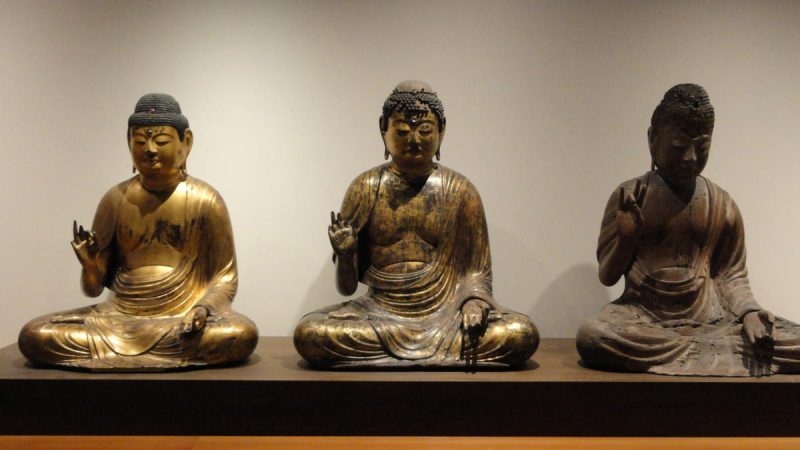 3. Paintings of Tibetan Buddhism is the most complete collection that has survived in the heritage of the West. It includes over 400 paintings with detailed iconographic explanations.

4. esoteric art of the Himalayas, the materials of which were donated to the museum by passionate collector Lionel Fuehrner. The collection tells of a true initiation into Himalayan culture. 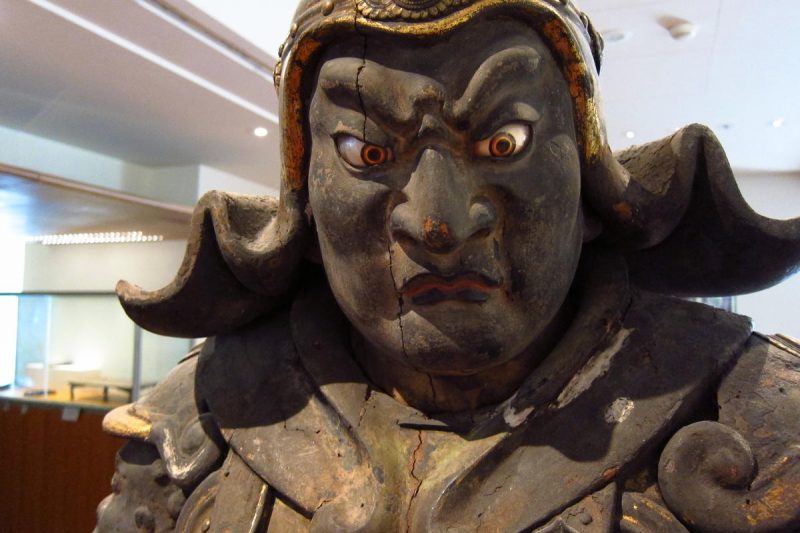 5. Textile History Department: the Ribu Collection, founded in 1979. This collection was donated by an Asian collector, Krishna Ribu. It tells the story of the textile industry in Asia through various exhibits demonstrating weaving techniques. The department currently has about 4,000 objects in its collection, many of which date from 475-221 B.C.